Designs and images courtesy of
frog, wHY, OMA, lexus, and WORKac

Lexus, Nike, OMA, DJ Honey Dijon, and more share their visions for what our future among the stars might hold in this portfolio for Document's Fall/Winter 2019 issue.

The dawn of a new space age is upon us, but unlike the Cold War-era space race, the goal this time is not merely to arrive at the destination but to stay, and it all begins with a sustained human presence on the surface of the Moon.

In 2019, 50 years after Apollo 11, China, Israel, and India attempted lunar landings, with mixed results, and the US and Japan are expected to follow in the coming months. American company Astrobotic, in partnership with NASA and delivery company DHL, hopes to start sending packages to the Moon as early as 2021. Meanwhile, Amazon’s Jeff Bezos plans to characteristically undercut the competition with his recently unveiled Blue Moon lunar lander, but even with a Prime membership, the estimated cost for lunar delivery is expected to hover around $1 million per kilogram.

There are many reasons for this renewed interest in space exploration: the curious nature of human beings that calls us to explore the unknown; the fact that we have the technology to do it; the desire to combat climate change by “off-planeting” heavy industry in an effort to return the Earth to a more natural state. Whatever the reasons, the inevitability of establishing a settlement in the final frontier is undeniable, and it looks as though the Moon will serve as our extraterrestrial base camp for farther explorations to Mars and beyond.

For Document’s Fall/Winter 2019 Issue, we invited a selection of the culture’s most compelling architects, designers, artists, thinkers, and even a DJ, to find their inner Major Toms and imagine human life on the Moon. What do we need to consider? How shall we live? What will it look like? What will we wear? How will we move? We asked them to show us, through their own inimitable style, what our future among the stars might hold.

Last week, we kicked off our lunar exploration with Honey Dijon’s “soundtrack for space travel,” and today, we feature Lexus’s vision for luxury travel on the Moon. We’ll be sharing more of these perspectives along with bonus content and interviews with these creators in the weeks to come. Here’s a sneak peek at the stories to come.

“We need to clean up the planet Earth. Let’s off-planet extraction and import raw materials from space while we eliminate plastics and waste and begin the solar revolution at home. We propose the Moon as a launching pad for these efforts, starting with asteroid mining for metals, chemicals, and—most critically—water. As we use existing technology to extract fresh water from cold space rock, it will not be long before we see massive reservoirs dotting the surface of the Moon. Colonies of asteroid miners, scientists, and space pioneers will form around these lunar oases in one-year shifts, shuttling between the productive Moon and the cooling, rehabilitating Earth.” 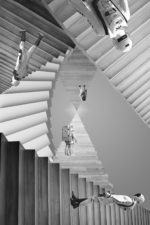 Architecture firm wHY imagines the citizens of lunar civilizations who are no longer bound by terrestrial constraints.

“The goal of the lunar civilization should not be to replicate earthly conditions but to seek new ones. The new citizens of the lunar habitation are adapting away from terrestrial constraints such as history, prejudice, and gravity. This new lightness of living is a bold exploration away from Earthly human conditions. Freedom from gravity should liberate us from common gathering. This new place-making for lunar citizens enables fresh assemblages of the body and the mind; a new human place that could only be made by lunar lightness.” 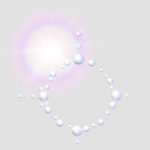 Multimedia artist Mariko Mori shares her work Radiant Being I.

“Eight astronauts experienced a cognitive shift in awareness, called an “overview effect,” while seeing Earth from outer space during their cosmic flight. I imagine that flying into the zero-gravity space and leaving Earth behind will feel somewhat similar to an out-of-body experience. Liberated from gravity, you will no longer feel your body’s weight and will be able to recognize your soul more vividly as your body belongs to Earth. I believe it will offer a different perspective on spatiality and could lead to enlightenment. A new kind of Earth-consciousness can grow that appreciates the richness and diversity in life on our home planet, a very special place in the universe. Radiant Being I is an image that came to my mind when I imagined what it would be like to be on the Moon.” 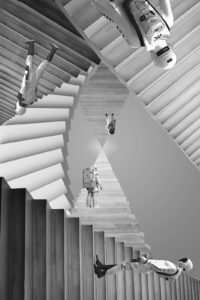 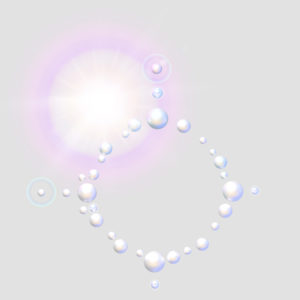 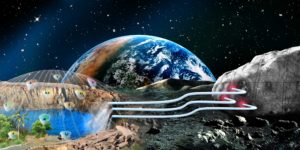