In November 2001, an unlikely crowd of Hollywood A-listers and Apollo 13 astronauts gathered at the Playboy Mansion for a black-tie gala. The theme was Stanley Kubrick’s sweeping 1968 sci-fi opus, 2001: A Space Odyssey, which was celebrating its titular year. The guest of honor was Arthur C. Clarke—the British futurist oracle whose short story had inspired 2001 and who worked alongside Kubrick on the film’s screenplay. At the command of Patrick Stewart—Star Trek actor and party emcee—Clarke materialized at the party. Or, rather, he was beamed in from his Sri Lanka home as a 3-D hologram. A fitting entrance for the man who popularized satellite communication over a decade before the technology actually existed—and a precursor of today’s thriving celebrity hologram industry.

“Permission to Dream” was the official name of Playboy’s 2001 gala. It was also the unofficial mantra of the progressive men’s monthly. Playboy allowed the time’s most radical thinkers to map out worlds within its margins—and in the Space Race era of ambitious ideas and giant leaps for mankind, science fiction flourished. By 1971, the magazine had amassed enough sci-fi writing from Clarke, Ray Bradbury, and J.G. Ballard to publish an anthology of it, titled Transit of Earth. But Clarke’s contributions throughout the ՚60s and ՚70s weren’t speculative so much as careful postulations on the cost of interplanetary travel—$20 from Earth to Mars and $1000 from Jupiter to Saturn, he calculated in 1969; an affordable ticket even accounting for inflation—taking space-obsessed America far beyond the moon. Somehow it all fit seamlessly between such earthly delights as full-frontal centerfolds, celebrities as you’d never seen them, Ron Reagan Jr.’s trippy dispatches from the Geneva Summit, and searing criticisms of American imperialism.

It was likely Playboy’s anything-goes ethos to thank for the incredible conversation with Clarke that ran in the July 1986 issue. Journalist Ken Kelley had traveled to Sri Lanka, where Clarke had been living rather peacefully since 1956, to meet the so-called “dean of science fiction.” Kelley arrived just prior to the Space Shuttle Challenger disaster of January that year, when the future of American space travel was at a crossroads, despite the Reagan administration going full throttle with its multi-billion-dollar “Star Wars” defense program. So, what better time to take a 35-hour flight to Sri Lanka? Below are a few of Clarke’s most fascinating revelations about the ’80s and our current future—from his casually progressive views on (his own) bisexuality to his warming support for Reagan’s own Space Force. 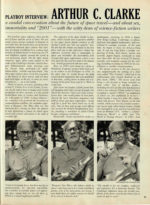 Clarke predicted the advent of flying Rolls-Royces.
The luxury car manufacturer might only have announced them last year, but in 1986, Clarke already had his sights set on a Rolls-Royce vertical takeoff and landing (EVTOL) vehicle—demanding the company get to work on the model “immediately.”

Reagan’s much-lambasted Strategic Defense Initiative, a.k.a. “Star Wars,” wasn’t an entirely ridiculous idea.
Clarke had been one of the most outspoken opponents of the incredibly expensive nuclear program that would supposedly defend America against soviet missiles. (At one point, Clarke had even presented a harshly critical video of Reagan’s program to a U.S. Senate subcommittee hearing.) But in a surprising 180, he admits to Playboy that at least it focused our attention on the practicalities of such a program, unlike America’s existing plan: “MAD, or Mutual Assured Destruction.”

He’s cool with celebrity presidents—even if they’re “obviously not” geniuses.
“I think it’s very appropriate that a movie star should become President of the United States,” Clarke muses, calling movies “one of the greatest art forms of the modern world.” Still, this was prior to the release of Home Alone 2.

Princess Leia, of the actual Star Wars, was the last person to visit Clarke’s house.
Kelley signs his host’s guestbook directly under the name of Carrie Fisher, who played Princess Leia in the space-opera franchise, and who sadly passed away at the end of 2016. Kelley’s first task after entering Clarke’s home was to face off against him in an “insanely complicated” space-age video game—if this was a tradition of Clarke’s, it’s fun to imagine Fisher and the author doing the same. 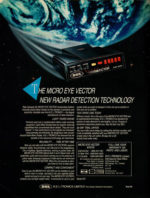 Sorry, UFOs aren’t real.
At least not the ones surrounded by conspiracy theories. “There’s not the slightest evidence of their ever having contacted us,” Clarke was informed by a friend who was ex-deputy director of the CIA. He remained on the fence about aliens though.

Clarke was a part-time Buddhist, or at least a Buddhism hobbyist.
Playboy’s interview was prefaced with a press release about Clarke that instructed: “Don’t ask me about my philosophy of life—I don’t have one.” Yet he’s willing to discuss Buddhism at length, voicing a strong attraction to Sri Lanka’s dominant religion in its purest form, i.e. not corrupted by other religious and political motivations.

Neil Armstrong massively bungled the now-famous moon landing first words, “One small step for man.”
“I took him up on that statement afterward, because he dropped out the ‘A,’” Clarke reveals at one point. “It was supposed to be, ‘That’s one small step for a man.’ He just fluffed it.” Still, Clarke preferred Armstrong’s words to the suggestion of another astronaut: “Help!”

Clarke was an honorary member of the Chelsea Hotel’s Beat Generation.
From ’56 through ’68, Clarke worked on the screenplay for 2001 out of New York’s iconic Chelsea Hotel, which was then an ad hoc headquarters for transplants from San Francisco’s Beat poetry scene—including William Burroughs, Allen Ginsberg, and Gregory Corso. On one particularly memorable occasion, Clarke even scored a “big smooch” from Ginsberg, much to the horror of the two astronauts Clarke was escorting at the time. Apparently Ginsberg’s beard was very scratchy. 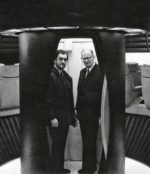 Clarke & Kubrick on the set of 2001: A Space Odyssey, Amy Fletcher, imgur.

He also surprise-introduced astronauts to the duo behind counterculture musical Hair.
Clarke was friendly with James Radio and Gerome Ragni, who wrote the “American Tribal Love Rock” production and its colorful, explicit denouncements of the Vietnam War. “I’ve got a lovely picture with them with one of the Skylab astronauts, taken at the Chelsea Hotel in New York,” Clarke tells Kelley, declining to name the mystery astronaut. Apparently the Apollo 13 crew was pretty upset with Hair over its “unpatriotic” anti-war message—with the exception of John Glenn, who loved it almost as much as Clarke did.

He was nearly kicked out of the Vatican after telling a rude joke.
Luckily, it was in Polish.

He hated 2001’s now-iconic theme music, “Thus Spoke Zarathustra,” the Nietzsche-inspired tone poem by Richard Strauss
Clarke much preferred the works of Sergei Rachmaninoff, the Russian Romantic composer who he gives an honorable mention in Transit of Earth—Clarke’s protagonist meeting his demise to a Rachmaninoff opus.

Clarke had progressive views on homosexuality and bisexuality, and apparently no qualms about voicing them.
Picking up on a possibly romantic central relationship, between two men, in one of Clarke’s stories, Playboy asks for the author’s thoughts on bisexuality—specifically, if Clarke has had a same-sex experience himself. The extremely casual response? “Of course. Who hasn’t?” 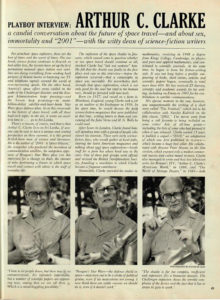 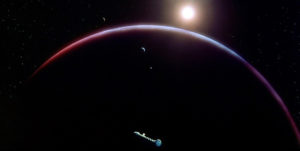 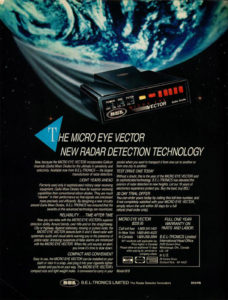 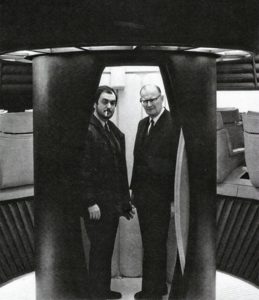