Nearly every night between the mid ’70s and early ’80s—sometimes more than once—Pat Ivers and Emily Armstrong lugged television video cameras and lighting equipment around Lower Manhattan. They caught hundreds of performances from bands who defined the era: think Dead Boys, Talking Heads, Blondie, Richard Hell, Bad Brains. Pat and Emily’s films became underground treasures, cherished by the bands they shot and the scene kids who crowded into neighborhood bars to watch ‘Nightclubbing,’ their cable access show. Between shoots, CBGB’s owner Hilly Kristal awkwardly set up them up with dates, a Dead Kennedy crashed on Pat’s couch, and they spent a night in jail with Keith Haring and David Wojnarowicz.

In a four-part series for Document, Pat and Emily trace the origins of their “spiritual following”: to capture the fleeting moment in New York music when rent was $60 and Iggy Pop was two feet away. Over the last few weeks, the pair have been taking us through the bands and venues that best capture the inimitable energy that was early-days punk.

This week, Pat and Emily talk Danceteria, from working in one of the first club video lounges to the culture shock of traveling north of Bowery.

Emily Armstrong—When we went up to work at the Danceteria, it was really going up. It was uptown; it was a triple level club. People were super dressed up. We were girls from CBGB’s. You know, we had a lot of black clothes. I don’t think we had the wardrobe to work there.

Pat Ivers—At the end of the night, you’d go to get paid and there’s a guy sitting in there with a gun on the table, and the manager counting out the money. And then they would pay you out of that money.

Emily—Everybody would get paid in cash, and they left with a bag of money at night. No checking accounts or anything like that.

Pat—Danceteria was so hot. You’re wearing a tank top and short-shorts, standing on this riser, and shooting the bands. The bands came on at like 1 o’clock, 3 o’clock, and 5 o’clock. And we always had to have someone standing behind me so that nobody would try and grab me. So, that was very different. But it was a great club.

Emily—[The first iteration of Danceteria] was only open for several months. It was so illegal, it couldn’t stay open. And then they had the Democratic National Convention, and it was inundated by conventioneers with their name tags. They were taking cocaine and stuff.

Emily—We had a dedicated lounge. We had old crazy couches with matching chairs—grandma kind of furniture. It was very intimate and dark, and when the bands were on, Pat shot them and we piped it upstairs, so a lot of people just stayed up there and just watched the bands on these TVs. But in the time in between, we had archival material and video people gave us.

But we had these old fashioned console television sets, and people were taking cocaine on top of them. They had these little vents in them, so it was going into the TV sets and causing electrical problems. So we went to Canal Street and had sheets of lucite cut to fit on top of the TV sets and little legs, so air could continue to ventilate so people could use that to lay their drugs out on, and not damage our TVs. [Laughs]

Images from the Danceteria video lounge.

Pat—You got to work with what you’ve got.

Emily—We were so inventive. Being arrested was…interesting. No blueprint for that either, you know.

Pat—They had been paying off the fire department and everybody.

Emily—It was a completely unlicensed. No liquor license, no zoning, no certificate of occupancy, no nothing. We just were there one night, and the bosses were conveniently not there, and this guy just knocked on the video lounge and told Pat, I think you answered it, that we were under arrest.

Pat—I mean, I looked at the guy, and he had a mustache and a brown leather jacket, and I instantly knew that he was a cop.

Pat—It was like Keith Haring, David Wojnarowicz, Brian Butterick, Zoe Leonard. It was like the superstars of downtown.

Emily—They assembled us in the video lounge because it was so comfortable.

Pat—And then they said, ‘If there’s anything you wanna get rid of before you go downtown-’

Emily—‘Like if you want to take a trip to the bathroom.’

Pat—‘This is the time to do it because we really don’t want to do a lot of paperwork.’ And so everybody got rid of it—their cocaine or their pot or whatever—and we all went down downtown.

Emily—It put a real damper on the whole l scene for me. We kinda just pulled back a little bit. We didn’t work at any of the new incarnations of Danceteria because we were robbed around the same time and it just seemed to all be tied in. 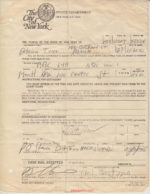 Pat—When we got back to the club, everything had been taken.

Emily—We lost some really great stuff, unfortunately—R.E.M, Devo. They had great bands there at Danceteria. That was one thing about the club you gotta give them credit for.

Pat—They were geniuses at putting a staff together and fantastic at booking bands. They really brought a lot of bands to New York that had never played in New York before.

Emily—And the DJ work that was going on with Mark Kamins and Sean Cassette. They’re attributed with introducing a certain kind of style of DJing into the city. They kept that dance floor moving.

Pat—And of course [Bush Tetras] were fabulous. They were sort of straddling that no wave sound. That was very much the sound of 1980. They played so well that night. Cynthia [Sley] told me later that she was so scared that she had not only the set list but a few of the lyrics taped to the microphone because she was terrified she was going to forget things. And of course I’m looking at her like she’s the coolest girl in the world—completely fuckin’ fearless. They’re having this enormous resurgence.

Emily—And they were able to pay them. They would get [the bands] accommodations and stuff. Some had a hard time traveling. They would go on these horrible tours by themselves. We went on the road a couple times, and it was just an awful way to live. They would have four of them in one room and stuff. 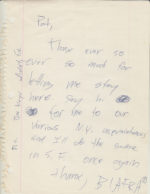 Thank you letter from Jello Biafra to Pat Ivers.

Pat—We were out in San Francisco, and we were the first flight back in the morning. It was like a five a.m., and the Dead Kennedys showed up. They had to go through the metal detector, and Jello [Biafra] had so much metal on we had to keep taking off layer after layer. It was a real sight gag. We all started talking to each other and when we got back to New York, they were just staying in just a dive hotel. Jello said, ‘Can I stay at your apartment?’ and I said, ‘Sure.’ In our collection, one of the pieces is a thank you letter from Jello. He was like 18 at the time. He was a fucking baby.

Emily—It sounded like his mom taught him how to write a nice thank you letter.

Pat—‘Dear Pat, Thank you so much for letting me stay at your apartment. Your friend, Jello.’

Read the last two editions of the series here. 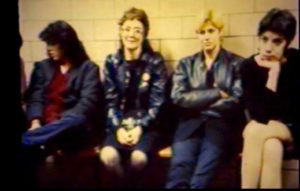 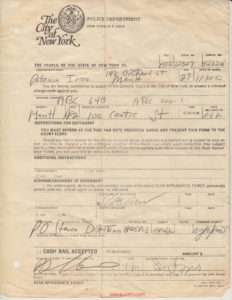 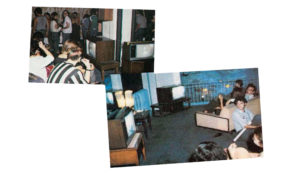 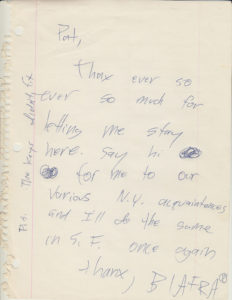