‘You gave up the rights for lawsuits when you came in to CBGB’: lessons from the legendary venue's heyday with Pat Ivers and Emily Armstrong.

Nearly every night between the mid ’70s and early ’80s—sometimes more than once—Pat Ivers and Emily Armstrong lugged television video cameras and lighting equipment around Lower Manhattan. They caught hundreds of performances from bands who defined the era—think Dead Boys, Talking Heads, Blondie, Richard Hell, Bad Brains. Pat and Emily’s films became underground treasures, cherished by the bands they shot and the scene kids who crowded into neighborhood bars to watch ‘Nightclubbing,’ their cable access show. Between shoots, CBGB’s owner Hilly Kristal clumsily set up them up with dates, a Dead Kennedy crashed on Pat’s couch, and they spent a night in jail with Keith Haring and David Wojnarowicz.

In a four-part series for Document, Pat and Emily trace the origins of their “spiritual following”—to capture the fleeting moment in New York music when rent was $60 and Iggy Pop was two feet away. Over the next weeks, the pair will be taking us through the bands and venues that best capture the inimitable energy that was early-days punk.

For their second edition, Pat and Emily revisit CBGB’s. They take us through how they sparked an unlikely friendship between SNL’s John Belushi and the Dead Boys—and the time Pat got “decked” at the Mudd Club.

Pat Ivers—Well, I’d say one thing is that there wasn’t a punk look. That was a British thing—mohawks and all that bullshit. People [in New York] just wore blue jeans. You had to save up for a fucking leather jacket. People didn’t look ‘punk’.

Emily Armstrong—We were more like a Beatnik thing. There was a real Beatnik streak in CBGB’s. Like Richard [Hell] fancied himself a Beatnik, and a lot of people identified with that.

Pat—Well because they read the Beats. I think people would be surprised how smart people were at CBGB’s. You could literally go to the bar and have a conversation with someone about books. Maybe not the Ramones. Well, Joey was different. He was smart. It was a very literate scene. It really was sort of the island of misfit toys on some level.

Emily—It’s like the kids who were outsiders and losers in high school got a second chance to go to high school again. I still call it CBGB’s high school because it was. Everybody had their cliques, but they did intermingle. You could be standing at the bar with, say, one of The Ramones then he’d pick up his guitar and walk on the stage. 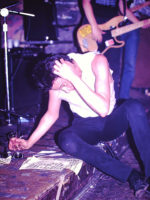 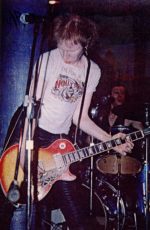 Pat—I remember I was sitting at the bar one night and Hilly came over. Fred Smith from Television was sitting to my left, and of course I loved him. But I didn’t really know him personally. And Hilly went like this: ‘Fred, do you know Pat? She’s a really nice girl.’ [Laughs]

Pat—I was like, ‘Ugh, Dad!’ [Laughs] It was a really familial thing going on there.

Emily—He was such a decent guy, too. He was the kindest soul. Hilly let bands play any kind of music they wanted. There was jazz bands, rockabilly, then no wave came in. It just was so varied. That was really Hilly. He wanted it to be like that.

He had his own record, and it was in the CBGB’s jukebox. Once in a while someone would play it. Everybody knew the words, and people would sing along. It was, like, a bad kind of country song.

Pat—We basically built a mini TV studio at CBGB’s. Nobody had headphones because it was too loud. You know when they say you’re in the flow? I was in the flow.

Emily—[The Dead Boys] did amazing performances. They went “Pat and Emily, you’re videotaping us tonight, we gotta be good!” They could pull themselves together from, like, the most catatonic states to get up on this stage. I never quite understood why they were never more popular. But, things just happen the way they do. They were cranky.

Pat—I mean, we introduced [John] Belushi to them. We were at a party…

Emily—Nobody was doing that, so they thought that was so unique. [Laughs]

Pat—We were standing on the balcony smoking a joint, and Belushi and [Dan] Akroyd came over to us and they said ‘Oh, hi girls, do you have any rolling papers?’ That weekend, Johnny Rotten was going to play on Saturday Night Live. So I turned around and said ‘You booked the fucking [Sex] Pistols as the first punk band that you’ve had? Are you kidding me? New York is the home of punk rock, and he went to a British band. What the fuck is wrong with you? And they were like, Uh, uh.

I said, ‘If you wanna see real punk, come to CBGB’s this weekend, and see the Dead Boys. Unless you’re afraid to go to CBGB’s, I mean.’ So Belushi went, Akroyd didn’t, and he loved them—and became friends with them. When Johnny Blitz was stabbed, Belushi played at his fundraiser, the Blitz Benefit. He brought [The Dead Boys] to Saturday Night Live, and they blew it. They just were so badly behaved that Lorne Michaels just said, ‘They will never, ever, ever play here.’ Cheetah [Chrome] says, ‘I look back and think, what the fuck?’

Emily—That was their big chance.

Pat—But you know, they were kids. The funny part is they were the sweetest fucking guys in the world. I remember Stiv Bators, the lead singer, hadn’t been to my house in like a year, and he walked in and he goes, ‘Oh, you painted!’ And he goes, ‘Oh, and your cat!’ and he picks it up. They were very nice people.

Emily—They were my favorite band. We videotaped them a bunch of times. That [show] was the first experience knowing that we can get really good sound. We didn’t do too many multiple camera shoots after that, because It was just so hard to get people to work for us.

Emily—We burnt through this whole series of boys who would drag our stuff around for us for a few weeks, and say like, ‘fuck this.’ [When] we switched over to color, we had to start putting these horrible lights up. That was another challenge. Think about these ballsy girls coming in and saying ‘Uh, I need to get up, I have all these bars now, and gotta hang these really hot lights I’m gonna put like this close to your face.’ Nobody really complained.

Pat—But one night, I think it was the second time we shot in color, was Richard [Hell]. Every third song, he leaned over and went ‘you gotta turn them fuckin’ lights off, David Bowie is here, and it’s making me crazy.’ I said ‘no problem.’ We turned off the lights, and we had the other camera with us so we just like plugged that in.

Emily—We were prepared Girl Scouts! But that Dead Boys show was really pretty amazing. Was that the one where he throws the bottle?

Pat—It was that show. They were mad at Hilly—he was their manager. They broke up all their instruments, and Cheetah threw a bottle into the audience. It hit this girl.

Pat—She had like these silver lamé pants on. He didn’t even mean it. It was really just an accident. She hit the ground. There was all this screaming. Merv, the bouncer, you could see him like lumbering through the crowd, and he picks her up. Her friend wraps her head in like a towel or something, and they carried her out to the front. We always claimed that we never got it on video tape.

Pat—‘No, no, we stopped shooting by then.’

Emily—Because she was trying to get back in some way.

Emily—You gave up the rights for lawsuits when you came in to CBGB’s because some people really liked to fight with the audience. You kinda had to leave yourself open to any of that stuff. But this was all pre-pogo dancing [moshing], thank God.

Pat—You know it’s so unusual that somebody got hit by a bottle because there wasn’t that kind of stuff that you see in England. It was early 1980. I went to a show at the Mudd Club. It was an English band, so these people are pogoing; I’m not. To me, it’s a little idiotic. But somebody slammed into some guy ahead of me. He turned around and thought it was me. He fucking decked me. I hit the ground. I had a big black eye. But that was unusual. That was 1980 at the Mudd Club, and it was an English band. You had to get into the hardcore era to see that kind of shit.

Read the first edition of the series here. 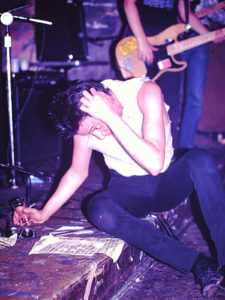 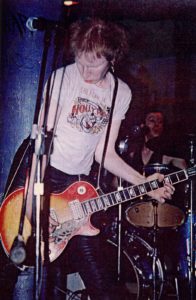 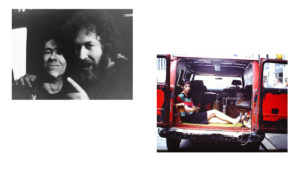