The artist and AIDS activist gets the retrospective treatment at the Whitney starting this month.

A pivotal part of the landscape of the bohemian, yet gritty, downtown New York of the 1980s, David Wojnarowicz found himself interspersed within its graffiti-covered walls, the new wave and no wave music that blared from the speakers of its nightclubs, in the experimental one-off performances that took place there. He would go on to become one of the most outspoken voices of the era, fighting fervently for rights for AIDS patients. Although the artist passed away from AIDS in 1992 at the young age of 37, his story and his work is just as relevant now, and until September 30, a retrospective of his work will be on view at the Whitney Museum of American art in an exhibition titled “David Wojnarowicz: History Keeps Me Awake at Night.”

An outlier from birth, Wojnarowicz grew up impoverished and abused in New Jersey, before entering the fringes of New York, where he hustled for money. The queer artist hitchhiked across the country and spent several months in San Francisco, and then Paris, before settling in New York at the age of 24. He began exhibiting his work in the raw, storefront galleries of the East Village, and soon thereafter his work would go on to be included in the 1985 and 1991 Whitney Biennials.

A true polymath, Wojnarowicz eschewed the idea that artist should be restricted to one medium and his work spanned photography, painting, film, performance, music, writing, sculpture and activism. Wojnarowicz was a poet before becoming a visual artist. It was when he first arrived in New York in 1978 that he began to work on the photography series Arthur Rimbaud in New York, where he photographed his friends wearing a mask of the 19th-century French poet’s likeness. In 1989, a catalog essay he wrote for an exhibition titled “Witnesses: Against Our Vanishing” curated by Nan Goldin at Artists Space earned controversy for its attack on politicians and leaders who were against AIDS treatment and advocacy. The National Endowment for the Arts threatened to pull funding for the show, and Wojnarowicz fought for freedom of speech for artists.

“History Keeps Me Awake at Night” features over 100 works from Wojnarowicz, beginning with the collages and photographs, including Arthur Rimbaud in New York. Three journals from his time in Paris where he discussed the genesis for the series will be on view, as well as the Rimbaud mask. His stencil works, which were painted on the walls of the abandoned buildings along the derelict, then-unused piers on the Hudson River. The would lead way to inform his more complex paintings. His friend and mentor, artist Peter Hujar, is the subject of a grouping of 1982 spray and collage paintings that are in conversation with a series of photographs of Wojnarowicz by Hujar. A suite of four paintings fueled by Hujar’s death and  other friends who died of AIDS-related complications and named after each of the four elements, are exhibited in their own gallery, depicting the rage, mourning, loss, and activation of the AIDS epidemic. An unfinished film, “Fire in My Belly,” will be screened, and recordings of Wojnarowicz reading his own work in The Drawing Center play in another room.

Wojnarowicz may have died 25 years ago, but his legacy of creativity and activism are just as important today because he is somebody who fought with passion for what he believed in, even though society by and large rejected everything he stood for—an important example to follow in the Trump era. 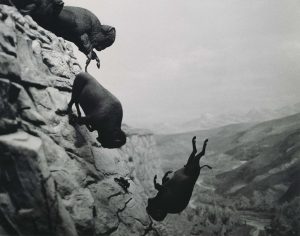 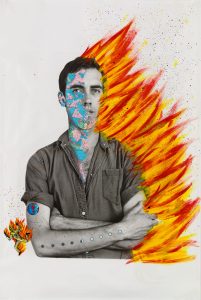 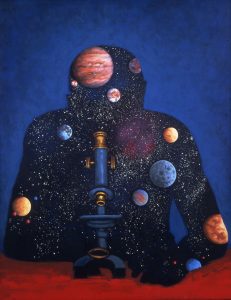