Approaching their sixth anniversary this month, DJs Adam Rhodes and Oscar Nñ and illustrator Mohammed Fayaz sat down with Document to reflect on the history, ethos, and evolving function of their Brooklyn-based party collective, Papi Juice. Since 2013, Papi Juice has been guided by a mission to create positive party experiences for queer and trans people of color. As the group has risen to prominence and locked down a residency at Elsewhere, they’ve used their platform to uplift other queer and trans artists of color. Papi Juice spoke with Document following their most recent event, a pride kick-off at the Brooklyn Museum on June 8th, where party-goers had access to the exhibition, Nobody Promised You Tomorrow: Art 50 Years After Stonewall, which features Papi Juice among 27 other LGBTQ+ artists.

Genevieve Shuster—So if you wouldn’t mind each introducing yourselves and then maybe how you guys met, yeah?

Adam—Oscar and I met through friends. We actually met on Tumblr, and we realized we knew each other, and hung out a bunch of times. I was like, ‘Oh my god, he’s an amazing DJ; I’m an amazing DJ!’ Actually, that’s not true. We were both up-and-coming DJs.

Oscar—I had DJ’d one event.

Adam—We were gallery hopping one day with our friend, Joel—this is the origin story of Papi Juice—in Chelsea and Oscar had come up to me and was like, ‘We should throw a party!’ and I was like, ‘Yeah, I guess we should,’ and that was the birth. And now we are here.

Mohammed—Cute. I met Oscar on Tumblr. We were following each other, and I realized he lived in Brooklyn, and I was like, ‘Oh, we should hang out.’ Then Adam I met at a Visual AIDs gallery show in downtown Brooklyn, and I knew a bunch of his mutual friends. I met him eventually that night, and I was like, ‘Oh, I remember you,’ and then the two started doing the party, and I went to the second one. They asked me to do the artwork for the fifth one, and I did a few here and there after that and then New Year’s Eve. They asked me to join the team full-time that following spring so I did. It’s been five years in a row now. 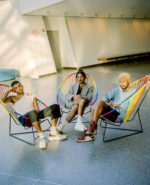 Genevieve—So when you’re putting events together, are you typically waiting for people to approach you and be like, ‘We have this thing that we’re hosting; can you do it and make it cool?’ Or are you reaching out to people?

Mohammed—At this point, we’re sort of bi-monthly. We have a permanent residency at Elsewhere, and that’s every other month. We know all of our dates a year in advance, and that’s our main meat and potatoes of what we do. Every off month, in a really weird New York way, we tend to either approach people, if we’re traveling, or someone will come to us and be like ‘Hey, we have this thing we’d love you to play.’ Those off months are really fun for us to branch out and then, the next one, go back to our business.

Genevieve—Have you had a favorite event or an event that was particularly weird or cool?

Oscar—I think our pride parties are always the most exciting slash weird. It’s our anniversary, so every pride not only is it pride in New York but it’s also our anniversary. So this year we’re celebrating World Pride on June 28th and also celebrating our six year anniversary so it’s just double the fun, double the pleasure. [Laughs]

Mohammed—And self awareness, too, with the lineup. Like understanding not only who do we want to book and what sounds do we love, but how do these sounds play together in a room? And if we’re programming three rooms that are active at the same time—what’s happening in the hall? What’s happening in Zone 1? What’s happening in the upstairs room? And if someone is in one room and this is not their sound, can they go to one of the other rooms and get their life? It’s such a big space at Elsewhere so it’s fun to think about how do we keep it moving, keep the crowd moving?

Oscar—It’s also a really intentional conversation that we have each round that we’re tasked to come up with a lineup, because it’s really hard. There are so many talented people in our community, and we want to give everyone a chance. But there’s also a collective decision, and we want to make sure, like Mohammed and Adam have said, that it makes sense, that it flows, that it feels good overall.

Genevieve—You guys have a very specific mission; it’s not just, ‘Let’s do a party that a lot of people will come to.’ Do you think your goals are unique to Papi Juice, or are they more widely shared?

Adam—I think we have a good peer group. We work amongst our peers, and we also collaborate with people who have the same goals that we’re trying to have. We’re not alone in this, for sure. 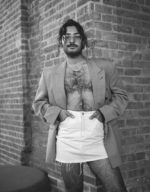 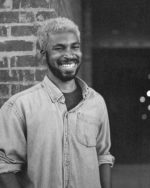 Genevieve—Who are some other people that specifically come to mind?

Mohammed—iBomba is a party that existed for a really long time before us. Azucar was happening in Bed Stuy when Papi Juice started; very similar kind of concept and community.

Oscar—I mean it’s queer history, so we can trace it back all the way to the 1920s in Harlem where there were the first ballroom events and from that moment to Paradise Garage to—

Oscar—Clit Club, in the East village. And then today there are many other people, our peers. Discwoman, for example, are a really great collective that we look up to and are really close to.

Mohammed—Yeah and, like Adam said, it’s so nice because everyone is doing this work with these intentions and some are very similar, some are very different. But we all understand that it’s not just about a cover charge and getting people in the door. It’s about: what is this space we’re creating? And our responsibility to that space.

Oscar—I think when we started it was a little bit more specific. You know, it was Adam and I DJing for six hours every night, and now we’re doing our own art. We just initially had a very explicit mission to bring queer and trans people of color together and now that mission has grown to making sure that we’re booking a range of queer and trans artists of color and then making sure that we’re also staying on top of who is really talented today in music. Who has been working in music that we haven’t worked with that we should be working with, who do we know, who do we not know, how do we reach out? And just thinking more broadly about the experience that people walk into when they come to our doors: that it’s not just a party. It’s an experience for us. We are really trying to think about how we can make it a full moment for the folks. So we’ve started working with a set designer, confetti system, and they’ve taken our events to an amazing new level which I think people really love seeing: just how much we care for the space and how much we are trying to not just throw a literal party. It’s a whole vibe.

Genevieve— Do you feel like, at this point, you have a bigger influence? Like if you bring in an up-and-coming artist, do you think you can help them get an audience and that’s part of the function of the parties?

Oscar—Yeah, absolutely. I think with every event we try to have a good balance of really known artists but then also we really try to make it a platform for people because you’re playing to hundreds of people at a time, so hundreds of people will see your name. Mohammed’s art on our instagram gets around 2,000 likes every time we launch something. I hope it’s an exciting opportunity for people, and I do really hope that it brings them other opportunities too. 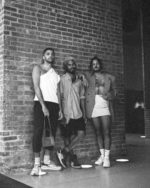 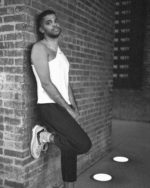 Mohammed—For every DJ that’s playing, on the screen I’ll have their name animated with some of the characters from the poster. We did a panel in Toronto in February, and one of the DJs said he had never seen his name as big as he had on that stage. It was the coolest thing to hear. And it’s not even about having my art that big. It’s about anyone in the crowd who, maybe they’ve never heard of Papi Juice before. Maybe they don’t have Instagram or Soundcloud or anything. They can be like, ‘Who is this DJ? They’re incredible,’ look up, and there’s your name all across the stage. And it’s so nice because so much of it now is the Instagram game, the Soundcloud followers game, whether you’re signed or not, and whether you’ve dropped an EP or not. Talent is talent, and to think of the crowd who is so lucky to hear someone who might not get booked otherwise; it’s a two, three-way street at that point which is really fun.

Adam—I think it’s been a platform even since we started. We’ve tried to function as a platform for up-and-coming people.

Mohammed—Our first Papi Juice poster was my first paid gig as an illustrator, and now I’m a full-time freelance illustrator six years later. So that direct path was not lost on me.

Genevieve—The Brooklyn Museum was the most recent thing, right? How was that?

Mohammed—It was so fun, exhausting! I mean, collaborations are tough in general; I think often with institutions you really have to sell them on your vision in the first place,and then they’re always gagged. They’re always like, ‘Oh my god, that was incredible.’ It’s extremely validating and there’s a little bit of: we’re not surprised. And the surprised tone can be funny. But it’s just a matter of translating the experience to different locations.

Oscar—I think with the Brooklyn Museum, luckily, we had people that really believed in us, and we had the full support of the staff that trusted us to build something that was really exciting for them but also for ourselves and for the artists that we were going to be working with. Having Papi Juice all over the Brooklyn Museum admissions lobby, that was really, really amazing. The Brooklyn Museum was one of the first museums I ever came to when I moved to New York, and so for us, to not only be featured in an exhibit there but also to have been their commemorative celebration for pride month is, for me personally, as an artist, as a queer person of color, it’s really just amazing.

Genevieve—And I feel like you guys being such an intentional group and having such clear goals, during pride where everybody is jumping on the bandwagon of selling rainbow shit but not being intentional about it, it’s good to hear that institutions are cooperating and Brooklyn Museum wasn’t stamping you out at all.

Mohammed—And collaborating! There wasn’t a single rainbow on that poster, and they were super down! It was cool. 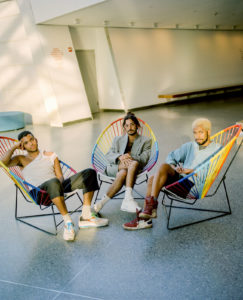 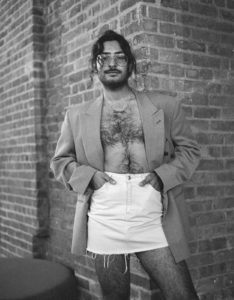 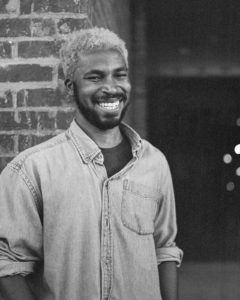 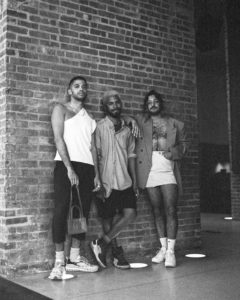 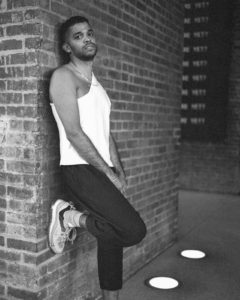