With her new film ‘Black to Techno,’ commissioned by Gucci and Frieze, the filmmaker looks to the genre's beginnings in the Motor City.

When a lot of people hear the term ‘techno,’ said filmmaker Jenn Nkiru, “they think about Germany, they think about skinheads, and they think about some hard aggressive other shit.” Nkiru wanted to set the record straight and tell the story of how techno emerged from the The Belleville Three—the DJs Juan Atkins, Derrick May, and Kevin Saunderson, who are credited for birthing the genre’s pulsating sounds from a suburb of Detroit called Belleville—and the black communities of Detroit.

Gucci and Frieze commissioned the rising artist and filmmaker—who helped director Ricky Saiz on the Beyoncé and Jay-Z video for “Apeshit”—to create a film for their Second Summer of Love series, where artists Wu Tsang, Jeremy Deller, and Josh Blaaberg explore the origins of electronic music genres like italo-disco and house. The film Black to Techno premiered on the evening of February 14 during the first day of the inaugural edition of Frieze Los Angeles. A conversation between Nkiru and dream hampton, a prominent hip-hop journalist and the executive producer behind Surviving R. Kelly, followed the screening.

Nkiru knew immediately that she wanted to focus on Detroit.

“I feel like Detroit as a city to me has given me so much and us so much in terms of music, in terms of culture, in terms of spirit. When Frieze and Gucci gave me the opportunity celebrating the 30th anniversary of The Second Summer of Love, and the idea they presented was techno, I was like, ‘You know what? This is the one for me.’ I’m a big music fan. I know music more than I know cinema.”

Nkiru reclaimed techno for the black community in Black to Techno, depicting its origins in Detroit and its subsequent journey to Berlin, which catapulted the genre to a global phenomenon that gave way to the million-dollar EDM industry of today. “What Juan Atkins and all these other guys who are in the basements of their mothers’ homes in Detroit avoiding the drug wars happening outside,” said hampton, “what they do is so much more sophisticated than what’s happening in the Bronx.”

“I was very interested in this idea of the two sides, in the ideas of marginalization, the ideas of machines, and on the other side, it’s the individual. Derrick May will talk about the idea of the drum machine and the transference spirituality, and the idea that this is an extension of self, and it’s used as a means to get closer to self,” said Nkiru.

The film opens with the track “Illuminator” by Underground Resistance, a music collective from Detroit that was integral in establishing the techno sound. A narrator, beatjazz musician Onyx Ashanti, tells the story of his grandfather, who worked in the factories, and how one day, his hand ended up in a perilous position but the machine froze. “That one time the machine refused to come down,” he said. “That’s what it means to be in tune with the machine.” The nonlinear film, which is part documentary, part video art, looks at the many aspects of techno in Detroit. It depicts the vivacious movements of jitting, a style of dance that originated in the Motor City where the feet quickly move to the rhythms of the music, to the 24-hour hair salon where people could get a brand new do before going out to a techno party. She touches on techno’s relationship to Detroit’s deep automaking roots, and the sounds of the machines in the car factories. Nkiru even took Detroit techno’s biggest female DJs—Stacy Hale, Minx, and DJ Hieroglyphics—and filmed them on a three-way turntable in the middle of the industrial environment of a factory. The film is woven with artful scenes, like that of a black baby looking out over moonlit waters. In the film we see how techno came out of marginalized communities, its industrial surroundings, and the urge for self-expression through music. 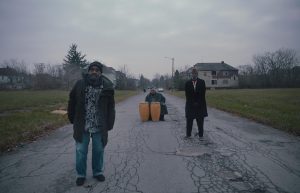 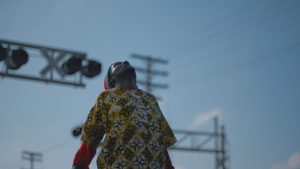