The best nightlife has always been the most honest. Killer clubs and parties aren’t glossy utopias for escaping the world but accessible spaces for rising above its evils via sensory chaos and blistering techno. Stud1nt (Izzy Barreiro) and NK Badtz Maru (Nicole Kim) are two DJs keeping New York up until daybreak, when they’re not showing up as friends and fans of fellow Brooklyn and Queens rave fanatics. On the Sunday evening we all meet up in Ridgewood, both are still reeling off the previous night at Boiler Room for Spinoff Gabber, a hardcore series organized by queer rave collective Unter, which takes the toughest sounds of ‘90s Frankfurt through to hardcore’s contemporary queer form.

For both artists, fighting for music’s inclusive future doesn’t stop at the DJ booth or dancefloor. Discwoman-affiliated Barreiro is also a member of queer media collective #kunq, and teaches workshops on music production. Kim works with Yellow Jackets Collective, “a chosen family of yellow queers collaborating towards radical futures,” and works daytime hours in a library, a space for “getting within yourself” not so different to a rave. After taking some photos at Ridgewood Park, we all sit down outside Topos bookstore to discuss the deceit of utopias, the truth of New York, and why we’re still waiting for a rave at Spa Castle.

Hannah Ongley—What’s the best show you’ve been to in the last year?

Izzy Barreiro—It was Yaeji’s show in Los Angeles when I toured with her. We both did. We had different legs of the tour—I was on the West Coast and you did Midwest?

Izzy—Yeah! That show was the best one. There was just so much raw energy. I think live performers get such a different reaction from the crowd, and seeing her on stage really getting the crowd excited was really cool.

Hannah—I never knew she danced. The first time I saw her was at MoMA PS1.

Izzy—Yeah. She’s got moves. What about you?

Nicole—I didn’t go out too hard last year. The best shows are anything that my friends are playing. That’s when you get so hype and all your friends come through. I had real fun last night, at Spinoff Gabber. Kilbourne crushed it. Shouts to Kilbourne, number one fangirl [laughs]. I guess I’m still reeling off of last night so I’ll say that.

Hannah—That’s sick. My friends hate most of my music. But then my most-played artists on iTunes are The Lion King, Chopin, and Aphex Twin.

Izzy—That makes sense. They’re all weirdly classic. There’s just something about them that’s kind of epic. The Lion King is epic! I can’t wait until that live action shit is coming out.

Hannah—If you had to be a Lion King character, who would you be?

Izzy—Scar. Scar is fucked up and hot. He’s edgy.

Izzy—I just think New York attracts people’s energy and their drive to do something. It’s really easy to pick up on other people’s energy here. I don’t know any other place where you’ll find people who are so motivated by some super niche thing that they could never do anywhere else. And maybe bodega cats, maybe that’s really the truth of New York.

Nicole—Bodega cats are New York. Yeah, Berlin, people idealize it too much, or think it’s some sort of utopia, but it’s totally from an outside perspective. I just don’t trust that at all, because you’re overlooking all the bad shit too. It’s choosing to be ignorant about a space so that you personally can be in this utopia.

Nicole—We’re all gentrifiers. That’s 101. You’re lucky that people are letting you be here. But I think when people move to Berlin or somewhere like that they don’t have to focus on stuff that’s uncomfortable, which is why they think it’s so good. 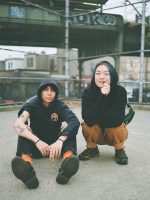 Hannah—What was the party scene like in LA when you were there touring with Yaeji?

Izzy—One of the ones I went to when I was there, which is also probably one of the best raves I’ve been to in a minute, was Directory Service. It’s run by our friend Luke. They’re really cool. It’s just so good.

Hannah—Do you know Michelle Lhooq, who does the Weed Raves?

Izzy—We were just talking about her! She was a New York staple, a scene queen. She’s super cool.

Izzy—When it became spring here, I was like, holy shit, what did I do all of winter? It was just thinking about summer.

Nicole—I think that’s why last night was so fun. It’s like, “I can wear running shorts and sit outside, sick!”

Hannah—Break out the Spa Castle slides.

Hannah—You’ve got to go. You should play there, you should throw a party.

Izzy—I would love to. That would be amazing. Someone should throw that party.

Nicole—I swear everyone talks about this every four months. Like, “Yeah, Spa Castle rave!”

Nicole—The one in Jersey is open 24 hours. You can get a 24-hour pass. Actually when I went to Korea as a kid, in the summer, they have those all around. So if you’re hella jetlagged you drop off your bags, go, sleep, get clean from the plane, sleep again, get food, then leave, like, 12 hours later. Oh my god, [to Izzy] if you could play anywhere, where would you play?

Izzy—If I could play anywhere, I would love to do a beach party, anywhere. There’s not enough beach rave parties. Pina Coladas in the morning, Hennessy and ginger beer at night, just switch up the vibes.

Nicole—I definitely want to play in Asia. I want to play in Korea, because I haven’t been in so long. And it would be sick because my parents are super not down that I’m gay, so I’d be like, I’m going to play a gay party in Korea.

Nicole—Eh, I’ll send them a flyer. Also a rainforest party. All about the water vibes.

Hannah—My funeral will be a rave. Open casket to The Lion King soundtrack.

Izzy—Cemetery rave! A graveyard rave would be so tight. Someone make that happen. Someone who’s going to read this. Put that in there! I want to play in a cemetery.

Hannah—Hollywood Forever! It’s in LA though. It’s, like, an event cemetery. They had a Gucci party there. What would you play in a cemetery?

Nicole—Actually I feel like whenever I play music I play spooky ghost music anyway.

Izzy—I would play “Sex With Me” Rihanna. I need her to put out her new album but that’s just a side note. I would play “Only You” Steve Monite—Amazing sexy jam. Not techno, but still a really good jam. And I’d probably play, like, some Jersey club.

Nicole—I’d play Atmozfears and Hardwell, it’s this super mainstream hardstyle track, but it’s… Ash and I played it at Bossa one time, for our transition we put that track on, and there’s this live festival video of Hardwell and Atmozfears doing the very hardstyle clapping. We reenacted that and she was hiding below the booth, then she popped up and we got all of—well, some of—Bossa to clap, at this tiny booth and we were smacking each other in the face.

Izzy—It would also be really tight to play The Cure. Or just, like, ‘80s shit. I would love to do goth prom. Themed parties can go wrong really quickly, but a prom would be sick. 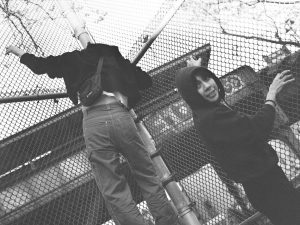 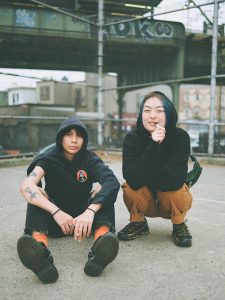 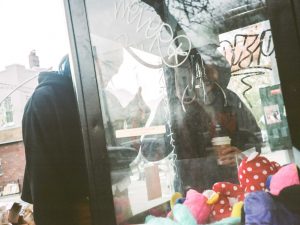 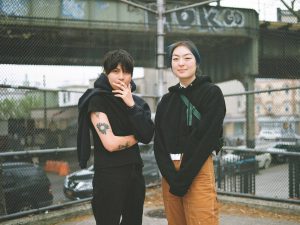