The poet and performer, who will stage three different happenings for Valentine's Day, discusses the evolution of their personal style and challenging the established meaning of love.

Alok Vaid-Menon, a New York-based poet and performer, says we’re in an emergency state of loneliness. According to the artist, this is because society teaches us to compartmentalize ourselves and follow a specific script about how we should live in order to avoid feelings of loneliness, which disconnects us even further.

Consequently, Alok aims to create nurturing spaces where people can show up and be their full selves. Approaching each performance with a dose of “delicious humor,” their mostly improvised shows—which are part sermon, part funeral, part drag show—illustrate the power of rejoicing in our vulnerability together. It is their hope that audiences leave feeling rejuvenated and more capable of taking on the heartlessness of the outside world.

In honor of Valentine’s Day, Alok will stage three different happenings meant to challenge the ways our culture perpetuates outdated messages about romance and love. Document asked Alok why meaningful exchanges with strangers matter, and how heartbreak can bring us closer.

Sara Radin—How has your creative practice evolved since you started writing poetry?

Alok Vaid-Menon—It took time for me to realize the sacredness of the stage. It’s a space where we can suspend the rules of how we interact with each other. In Western society, performance is often seen as something where you pretend to be something you’re not. But I believe performance is one of the only places where we can actually be our true selves.

Sara—I love your personal style. How does your art influence what you wear on and off the stage?

Alok—In the beginning, I was wearing gowns on stage, and people were saying things like, ‘You look great.’ I started to recognize that so much of my own art practice, and that of many gender nonconforming artists, is an everyday ritual. It’s not just something we do at a gallery or on a stage. It’s who we are and there are no lines between my art, how I dress, or who I am.

Sara—You’ve performed in 40 countries and 400 different venues. I’m interested in hearing what that experience has been like, especially when you’ve performed in places where being gender nonconforming or queer might be illegal or frowned upon.

Alok—I’ve performed in a lot of places where that’s the case, but what’s important to acknowledge is that I’m often invited by local groups who work really hard to make sure that I am safe. We often hear these narratives about how there are dangerous places to be queer, but we don’t often hear about the resilience and savviness of local activists who are working despite those conditions. 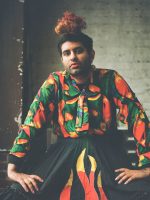 Sara—Valentine’s Day is such a patriarchal and capitalist holiday. Will you tell me more about your upcoming events and how they attempt to challenge that?

Alok—This week I’m doing a residency at Invisible Dog Art Center in Brooklyn. It’s called Strangers are Potential Friends and I’m doing three public performances. On Wednesday, I’m doing a piece called Hey. I’ll be sitting in the gallery for nine hours and having meaningful exchanges with 12 different strangers for 20 minutes, where we can talk about whatever we want, but it has to be through texting. I’ve met some of my best friends through the Internet. There’s currently this conservative narrative that technology is alienating us but I think it’s more about how we use the Internet. So, in this performance, I’m asking what happens when we speak to strangers about vulnerable things we can’t even speak to our friends about.

Alok—On Thursday night, Valentine’s Day, we’re doing a Cry-In, which I’m so excited about because I’ve wanted to do this my entire life. I’m having 40 people come together and do performances together. I’m recruiting strangers that entire week to work with me to make art and protest romantic love.

Sara—What do you mean by ‘protest romantic love’?

Alok—From a young age we’re taught that there’s only one way to love and that it is somehow superior to everything else, which means we spend our entire lives trying to fall in love versus actually acknowledging all of the forms of connection we already have. We’re constantly roaming around trying to navigate this binary between being in a relationship and being single, but we have so many friends and people around us that really care about us, yet that love is somehow seen as inferior. So, we’re trying to break down the wall that makes romantic love the only expression of love, and show that there are many other forms that are just as important, if not more important. 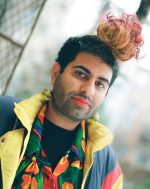 Sara—Tell me about the Love Hurts performance. What inspired you to use this holiday, which usually focuses so heavily on romantic love, as an opportunity to talk about heartbreak?

Alok—I’ve curated a lineup of my friends who will be performing about heartbreak, who all happen to be trans, nonbinary, and people of color. There are very few places in this culture where you can go if you’re depressed, single, or not even interested in romantic love, and I think that dispossesses the majority of us. We’re constantly trying to emulate this Hollywood simulated narrative that doesn’t reflect how we actually live our lives. A lot of us have deep and sustained relationships with our friends and family that are so much deeper and a lot of us are not able to access romantic love because we’re not white enough or fit enough. As a marginalized person, you almost experience a more extreme type of heartbreak because you’re constantly having to confront a world that doesn’t see you as worthy of love. But also I’ve learned to listen to my heartbreak or sadness, and that they’re not inherently negative things.

Sara—What does love mean for you?

Alok—We’re often taught that to love is to use one another and to not need one another and I actually believe that needing others is an incredibly beautiful, sacred thing. We need to stop believing in this kind of toxic idea of self-reliance. People often say to me, “You’re so brave. You’re so strong.” But I’m actually really fragile and that’s ok. I just need other people to help, and when those people are able to reciprocate, that’s the closest thing to love I’ve ever felt. 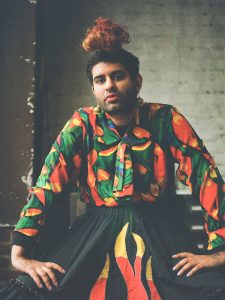 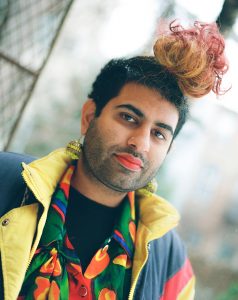