“Above, below, beneath” provides a window into the political stakes of Ebony G. Patterson's decadent, intricate tapestries from Document's Fall/Winter 2018 issue.

The Jamaica-born artist Ebony G. Patterson creates art to give a voice to the invisible and the marginalized and to question the roles of identity and the body. Her work includes coffins covered with ornate patterns, as an homage to the “bling funerals” of underprivileged Jamaicans; decorated portraits of people killed in the Tivoli Incursion, a 2010 drug battle in Kingston, Jamaica; and tapestries that feature images of children of color at play, as a corrective to social narratives that prematurely age them. Patterson focuses in particular on the working class and people of color, whose images she imbues with beauty and dignity.

Beginning in November, Patterson, 37, will show new tapestries, richly adorned with a cacophony of embroidered flora, rhinestones, beads, and glitter, at the Peréz Art Museum Miami (PAMM) and at Monique Meloche Gallery, in Chicago. (The name of the PAMM exhibition, …while the dew is still on the roses…, is taken from a line of the C. Austin Miles funerary hymn “In the Garden.”)

To produce the tapestries, Patterson began with the designs of the decadent outfits in which she dressed her subjects. A tailor in Jamaica created garments from her patterns using rich fabrics, such as brocade. Patterson then photographed her subjects, clothed in the garments, against a printed backdrop. She edited the photos to create tapestry designs, then sent these to a commercial weaver to fabricate. Once she received the tapestries from the weaver, she finished them in her studio, embellishing the works until they were ready to be hung.

In Patterson’s tapestries, images of which appear in this portfolio, bodies seep in and out of an elaborate sea of jeweled flowers. “With all the beauty at the surface,” Patterson says, the composition nevertheless suggests that “something isn’t quite right.”

“Most of these images are inspired by this idea of what it means to witness, what it means to bear witness, and who’s allowed to participate in the act of witnessing,” Patterson says. “While [my] previous work required the audience to think about itself with bodies, these images are very much about the people who bear witness to circumstances in communities where [murdered] bodies were found.”

Patterson’s work serves as a metaphor for life, reminding viewers that, while one can indulge in beauty, there’s usually something deeper and more complex hidden beneath the surface. 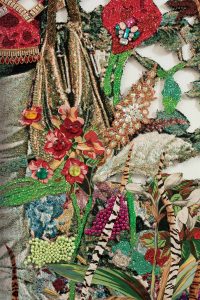 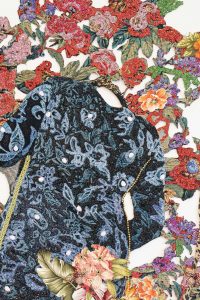 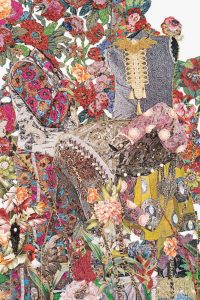 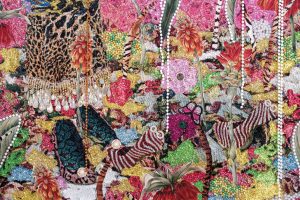 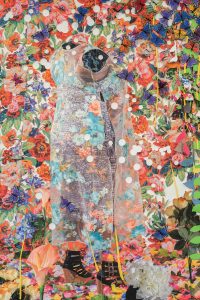 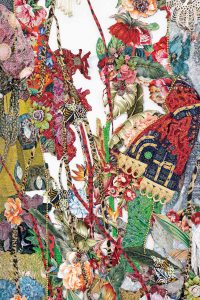