Judith Bernstein elaborates upon the political overtones of her catalogue.

Judith Bernstein first made waves in the 60s with penis paintings that included a phallus shooting bullets, inspired by graffiti found on the walls of the men’s bathroom while studying at Yale and by her stance against the Vietnam War. She later caused a stir as a member of the Guerrilla Girls, an anonymous group of artists who fought against gender and racial inequality in the art world. Here, Bernstein shares a never-before-seen painting, which she explains in her own words:

“In this portfolio, the artwork spans 50 years, from Supercock, a drawing from 1966, to my most recent painting Cockman #5. The original Cockman was first exhibited in my show Fuck Vietnam at The Box L.A. in 2011, and is now on view in Judith Bernstein: Rising at the Kunsthall Stavanger museum in Norway. New Cockmen have appeared, most recently at Mary Boone Gallery for my solo exhibition Dicks of Death in 2016. Another will debut with Karma International at Art Basel in Switzerland this June.”

“I’m extremely disenchanted with the current American political climate—where bigotry, greed, and sexism are taking center stage. I want to address the literal and figurative elephants in the room: ISIS, the Taliban, Paris, Brussels, Pakistan, etc. History has a way of repeating itself. ‘Cockman Always Rises!’” 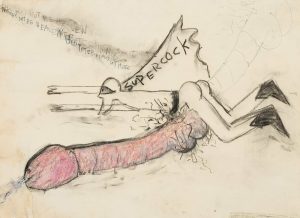 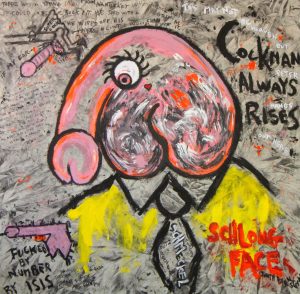