The sculptor elaborates upon the impetus behind her human-esque pieces.

It was out of necessity that Kaari Upson built the two sculptures in the portfolio image she submitted to Document. Over the last few months, derelicts have been breaking into the Los Angeles-based artist’s Koreatown studio. “They steal crazy things,” says Upson. “They stole my neighbor’s tarp. Everything is just being shifted. It’s called creeping.” The artist, who has used other people’s possessions and imagery in her work, thinks that it might be a case of karma. “They keep getting in, and a lot of my work is about trespassing; work I’ve done in the past is about entering places I shouldn’t be, so this might be slightly karmic,” says Upson.

When the police told her they couldn’t do anything about the problem except suggest that she build a higher fence, the artist took matters into her own hands, installing a surveillance camera and gathering random items around her studio—an Angelina Jolie mask, a Robert Mapplethorpe photo ripped from the cover of Bookforum, a wig, pants, and a shirt from Costco—to construct two dummies that can be considered scarecrows or sculptures, depending on whom you ask. “So we could scare the shit out of these homeless people,” says Upson, before having second thoughts. “It’s not about scaring them—it’s about getting them to not trespass.” Upson has yet to decide whether she will eventually turn the whole thing into an art project: “I just want to see what happens on the camera.” 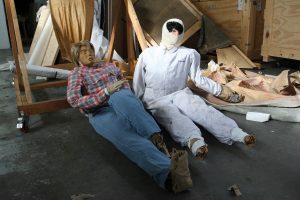