As the Brooklyn Museum shines a long overdue light on two decades of conceptual works by pioneering Latina artists, a trio of emerging New York artists look back on the radical women who carved a singular path through the American art world.

Three decades ago, the anonymous art collective Guerrilla Girls pointedly reminded New York City that less than 5 percent of the art in the Modern Art sections at The Metropolitan Museum of Art belonged to women. The posters, featuring a guerrilla’s head collaged atop a painting of a nude woman, ran on the sides of city buses until being removed by the MTA for being too sexually suggestive. It wasn’t the exposed breast that concerned the MTA, supposedly, but the seemingly phallic object in her grip. It served as a potent reminder of the constraints placed on female artists, both in their work and in their attempts to educate the broader public about the ingrained sexism and exclusion of the world of modern art.

A new show at the Brooklyn Museum this spring is one welcomed redressing of the mainstream art world’s dismal of women, and even more so, Latina artists. First seen at the Hammer Museum in Los Angeles this past fall, Radical Women: Latin American Art, 1960–1985 is now on the east coast for the first time. The sprawling exhibition sheds a light on some of the most groundbreaking contemporary Latin American and Latina artists working in America. The show is an extensive survey of the boundary-pushing conceptual art that was overlooked in the last quarter century, featuring the work of 123 artists from over 15 Latin American countries. The radical works created by these women was a passionate response to the political and social unrest occurring across Central and South America at the time, thoughtful and conceptual renderings of the often-violent military and dictatorial regimes in power throughout the region. Much of the work in the show uses the physical body as a site to protest the oppression these women faced daily. The pieces collected in Radical Women are a far cry from the male-dominated Minimalist movement of this same period. Take for instance, the work of Sylvia Palacios Whitman, a performance artist who utilized surreal stage props to marry a visual Latin-American heritage with the modernity of the New York dance scene, or Teresa Burga’s conceptual research-based drawings that explored political unrest through the lens of femininity, and Ana Mendieta’s highly physical works that used her body as an emotive tool to articulate a longing for freedom and a return to the island of her birth, Cuba.

In the spirit of the exhibition and as a homage to the Latin American artists that pushed the boundary forward in their transformative work, Document spoke with three emerging Latina artists based in New York City today, who can trace the concepts, approach, and heritage of their work to the radical women on display at the Brooklyn Museum.  These include mixed-media artist Rose Salane, who is of Peruvian-Italian heritage, Colombian sculptor Diana Rojas, who creates objects that serve as a commentary on the materialism of our culture, and Colombian painter Maria Berrio, who addresses femininity and its connection to nature in mythological tableaus. With women’s rights and feminism primarily taking a backseat to larger socio-political issues of the time, “the show is so important in providing the context, year by year—what type of military regime was in the country and how did people feel,” Salane explained, whose mother grew up in Peru. “She was always under a military regime. They didn’t have menial things.”

The artwork in Radical Women is shown in a broader context that pays respects to the artists that have been left out of cultural discourse, despite opening up new artistic boundaries. The work done by these women lives on in a tangible way today. The show centers on the concept of the radical woman artist in “their use of the female body for political and social critique and artistic expression.” How does this translate to today? Is it the way you dress, your views on politics, the way you carry yourself through the world? Is it merely acting out of the tidy lanes society prescribes? For some, it is as simple as having the agency to create, and for others, the idea of radicalism involves making work that is just as shocking as the issues which they rail against. For Salane, radicalism lies in the democracy of her work and “being able to reach many different audiences,” she says. “I don’t like work that is specific to the art world, or one type of person. This is where the conversation starts—the diversity in the art world is so minimal.” And for Rojas, radicalism means “doing what you want to do for you. It’s important to do what you feel strongly and passionate about—I think that’s what those women did.” 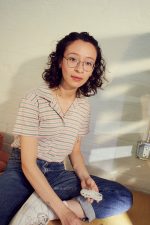 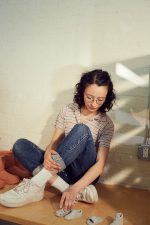 Ceramic sculptures inspired by the high-luxury footwear by brands like Balenciaga, Gucci, Vetements, and Margiela, among others, working primarily with her hands, Rojas’ pieces are intimate re-contextualizations of goods typically associated with large-scale production and mass consumption. Her craftsmanship is a direct ode to her Colombian heritage, as is her choice to make what are, essentially, ceramic bootlegs of fashion’s most coveted pieces. “In the town where my parents are from, Nike would be considered a luxury good,” Rojas said. “The reason why I do a lot of these shoes is that they seem way beyond my means and the means I grew up with. I’m taking mud and dirt and making them look like actual objects. My parents have the thinking that you can make something with nothing and that has stuck with me in my work.”

The physical transference that is central to sculpting, hands shaping mud and dirt, is one reason why Rojas connected to Whitman’s famous 1977 performance piece Passing Through, a focal point of the Brooklyn Museum exhibit that features the artist wearing massive hands made of papier-mâché, one of the few performances she repeated more than once. “Hands play a big role in my work,” Rojas said. “Whitman says something about her performance being an extension of your own hands in Passing Through, and that’s what I think of my work: an extension of my own being.” 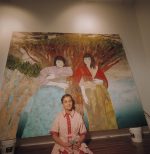 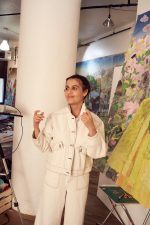 Home is a dominant theme in Berrio’s large-scale paintings. Where origin stories and their associated memories might be problematic for some, the painter is creating her own ideal tableaus of the past. Memories that have, in her words, “turned into surreal, utopian worlds where these women live in harmony with each other and nature. I want women to be seen as powerful beings,” she said. Berrio’s detailed collages are storybooks unto themselves, speaking to mythological worlds and traditional folklore, drawing heavily from modern feminist ideals. For Berrio, her pieces are a tool to help her understand the world around her, a world full of woman looking to occupy it on their own terms. Her artwork brings to mind ancient tales of Gaia, where the female being is inherently interconnected with the Earth and all things that spawn from it.

It’s this earth-to-body connection that opened Berrio up to Ana Mendieta’s work, particularly her 1975 performance Corazón de Roca con Sangre (Rock Heart with Blood), one of Mendieta’s recurrent “earth-body” pieces where she’d stage primal, ritual-esque scenes involving her physical form, along with blood, twigs, rocks, and flowers. “The way Ana related to the direct nature that women have in their environment is something that occurs in my work. I think a lot about women and femininity…and I play a lot with mythology. She was one of the first artists that taught me to think as a social being. As women, we need each other, but we don’t need to have labels.” Mendieta, herself, immigrated to Iowa from Cuba, experiencing a painful separation from her family at home. “It is a sense of displacement for a lot of women immigrants like me, [that is] present in the work,” Berrio said. Displacement, for Berrio, is actually one component of a larger concern for women like her, who are in pursuit of kinship, both personally and creatively. “We are Latin American women,” she said. “We think a different way, we act a different way. Our culture is completely different. We have a completely different relationship to nature.” 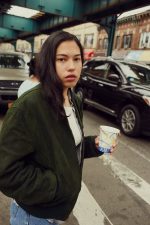 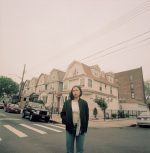 In moments of chaos, it’s easy to miss the small things that leave behind a big impact. The work by this New York-born artist looks at the quiet moments between conversation—the missed glances, the overlooked interactions that cause ripple effects in society. The minutia of the everyday, when magnified by Salane’s eye, creates a potent kind of focus. One that reveals that the answers aren’t in what’s being said, but rather, in what isn’t. Raised in a mixed-race household as the child of a Peruvian mother and Italian-American father, Salane grew up with the tension of having to choose sides, yet both are present in her work.


Salane’s work in mixed media plays with narratives and true events. The funny thing about facts is that there’s no hard and fast litmus test for them—the moment someone describes a situation, it becomes subjective, privy to their own interpretations. “I’m always looking at the periphery, at objects that haven’t been touched and why they’re there, but they’re all encased under a big event, like a presidency or a terrorist disaster.” The connection here is uncanny. Salane’s mother grew up in Peru under a military dictatorship, and while living in present-day America doesn’t mean that there are “tanks running through the streets after 8pm, making sure everyone’s inside,” the sense of anxiety (at least in New York, among a certain strata of cultural and socio-economic capita) is, in many ways, a new state of consciousness. The palpations that this new regime of light paranoia has induced in the city’s residents is present in Teresa Burga’s 1970 drawing, Sin titulo (Heartbeat recording and light). Burga, who was a leader of the Grupo Arte Nuevo, made works in this period that addressed the military coup in Peru, which took place in 1968. “My mother told me how the various military dictators from that time would help the poor and then the rich [and vice versa], and it was always a mess.” 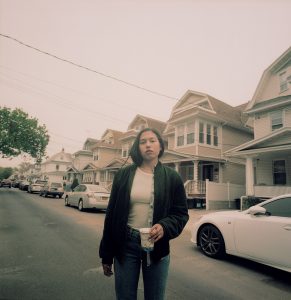 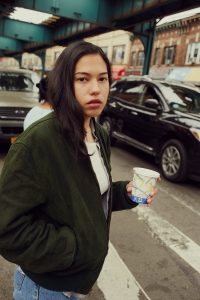 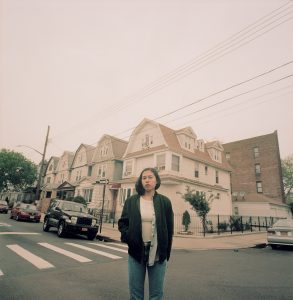 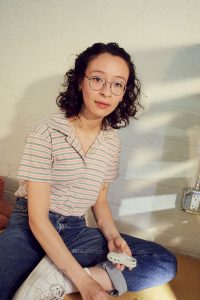 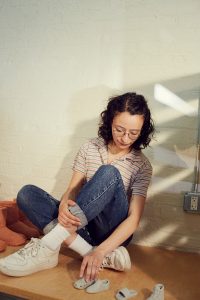 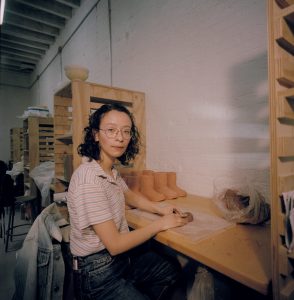 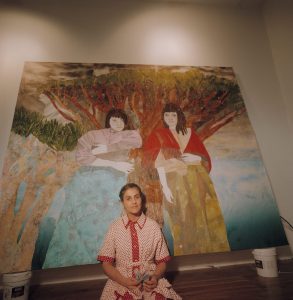 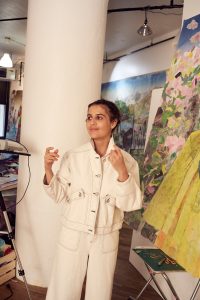