Architect and industrial designer Gaetano Pesce reflects on politics, pop culture, and the passing of time.

Gaetano Pesce elaborates upon the importance of liquidity, lightness, and minestrone soup to curator Hans-Ulrich Obrist.

Always armed with an element of surprise, Gaetano Pesce’s designs are far from conventional. For the past five decades, the Italian, New York based designer has been challenging the worlds of design and architecture by using sociopolitical and pop culture references through innovative materials, vivid colors, and multi-sensory environments. Pesce’s work ranges from the 1993 “Organic Building”—a brick colored structure covered by a vertical garden containing over 80 species of plants that disguises its sophisticated watering system through a series of strategically placed pots—in Osaka, Japan, to the bulbous “UP 5” chair (commonly called “Donna”)—which was inspired by his idea of women and is shaped as a female form. Its accompanying spherical ottoman (“UP 6”) is meant to represent a ball chained to her foot. In 1966, he concocted a formula to emulate the scent of minestrone soup for his show “The Time of Questions” at the Centre Pompidou in Paris, and then did so again in 2013 for his retrospective at the Collective Design Fair in New York. In 2010, he created a pair of malleable shoes composed of plastic discs for Melissa that the wearer can shape to her liking. His work has been exhibited at the world’s biggest institutions like the Victoria and Albert Museum in London, the Museum of Modern Art in New York, and the Musée des Arts Décoratifs in Paris. Curator and Serpentine Galleries artistic director Hans-Ulrich Obrist spoke to the legendary designer about his legacy, his practice, and his 2014 retrospective at the MAXXI in Rome.

Hans-Ulrich Obrist—How do you feel about being referenced in Anthea Hamilton’s piece [“Project for Door (After Gaetano Pesce)”], which is shortlisted for this year’s Turner Prize? At this contemporary moment, why do you think this particular piece of your work has been returned to?

Gaetano Pesce—Anthea is a very intelligent woman, and she understands that art and architecture today are going toward figurativism toward what is more recognizable for people and closer to the content of the work. Fifty years ago, pop art showed us the return of recognizable forms. Anthea understood that what I made in 1972 was ahead of its time, but I still think that a contemporary city one that is abstract most of the time needs to have buildings and urban elements that are able to provoke surprise (like the one Anthea realized). I really hope she wins the prize.

Hans-Ulrich—In many ways, your work has connections to American pop in its use of chance, imperfection, humor, and references to the body. Do you see this connection?

Gaetano—I believe that, unfortunately, the architecture of our time didn’t understand and didn’t use the contributions of pop art. Or if it did, it was in very rare occasions. Pop art brought the ordinary reality to the attention of a public that was interested in art. It pointed out the importance of advertisement, marketing, and what is connected to the world of mass production. I’m sure that I took advantage of that movement in my work.

Hans-Ulrich—The general understanding of design is related to a large scale production of a standardized product, while artisanal craftsmanship—where each piece is bespoke and unique—occupies the other end of the spectrum. How do you see these two approaches to design and craft relating to each other, and how do you approach them within your own practice?

“Design must become a commentary of reality; a document of the identity of the place where it is realized and produced; and an expression of the mind of the person who created it.”

Gaetano—In the 60s, I took time to think about Marxism and I ended up with the opinion that I had to separate myself from that movement and its beliefs. In the 70s, though, I stated that the main right of human beings—men and women—is to be different, and in that diversity we can realize ourselves as individuals. In the same way, I started thinking that objects should have the same right: they shouldn’t have been “slaves” nor standardized, so I attempted to find a way to produce unique pieces in large scales. The technology of today, with the help of computers, can provide for a unique car, a unique refrigerator, a unique table, etc., at industrial costs.

Hans-Ulrich—You often speak of a contemporary “liquid” materialism. What brought you to that sense?

Gaetano—In my opinion, liquid refers to something that could change its form and contents. Today, there are materials that represent the nature of our time. I personally use liquid materials that can assume different densities and, for example, could become rigid. Their feminine qualities are: transparency, love for colors, elasticity, sensuality, unpredictability, sonority, softness, and surprise…Traditional materials, instead, are predictable and rigid; they can be easily ruined, they don’t provoke surprise, they are matte, they don’t like sound, and—generally speaking—they are masculine, coherent, and repetitive. I’m sorry to say that there is not a lot of curiosity in materials of our time, especially in architecture. Today we use materials discovered by engineers of the 19th century.

Hans-Ulrich—You once produced a piece of work that featured a block of polystyrene, which drips water droplets to mark the passing of time. You’ve stated that the power of this piece lies in that each drop produces a different sound as it falls, signifying the perception of time is always different. Could you discuss this piece, and the attached philosophy a little further?

Gaetano—This is a beautiful question, and I’m really pleased to give you my answer. It is a common belief that time is standard and repeats itself based on equality, but I always thought the exact opposite: that time never repeats itself. The drops that produce sounds is a good example. In 1975, in Paris at the Louvre, in the last room devoted to my retrospective [“The Future Is Perhaps Past”], there was a huge clock with just one hand; it would have taken 80 years in order to complete its full round, the ideal length of life for that time (today even more). Today, I’m working with an Italian company on a wristwatch that gives the real time [life] of a person. It can be purchased for a newborn that can know the exact position of the time of his life just by looking at his clock.

Hans-Ulrich—In your 2014 retrospective at MAXXI in Rome [“The Time of Diversity”], the show was organized according to the words “Non standard,” “Person,” “Place,” “Defect,” “Landscape,” “Body,” and “Politics.” The relevance of most of these in relation to your practice is glaringly obvious, but I was struck by “Landscape” as perhaps the least self explanatory. 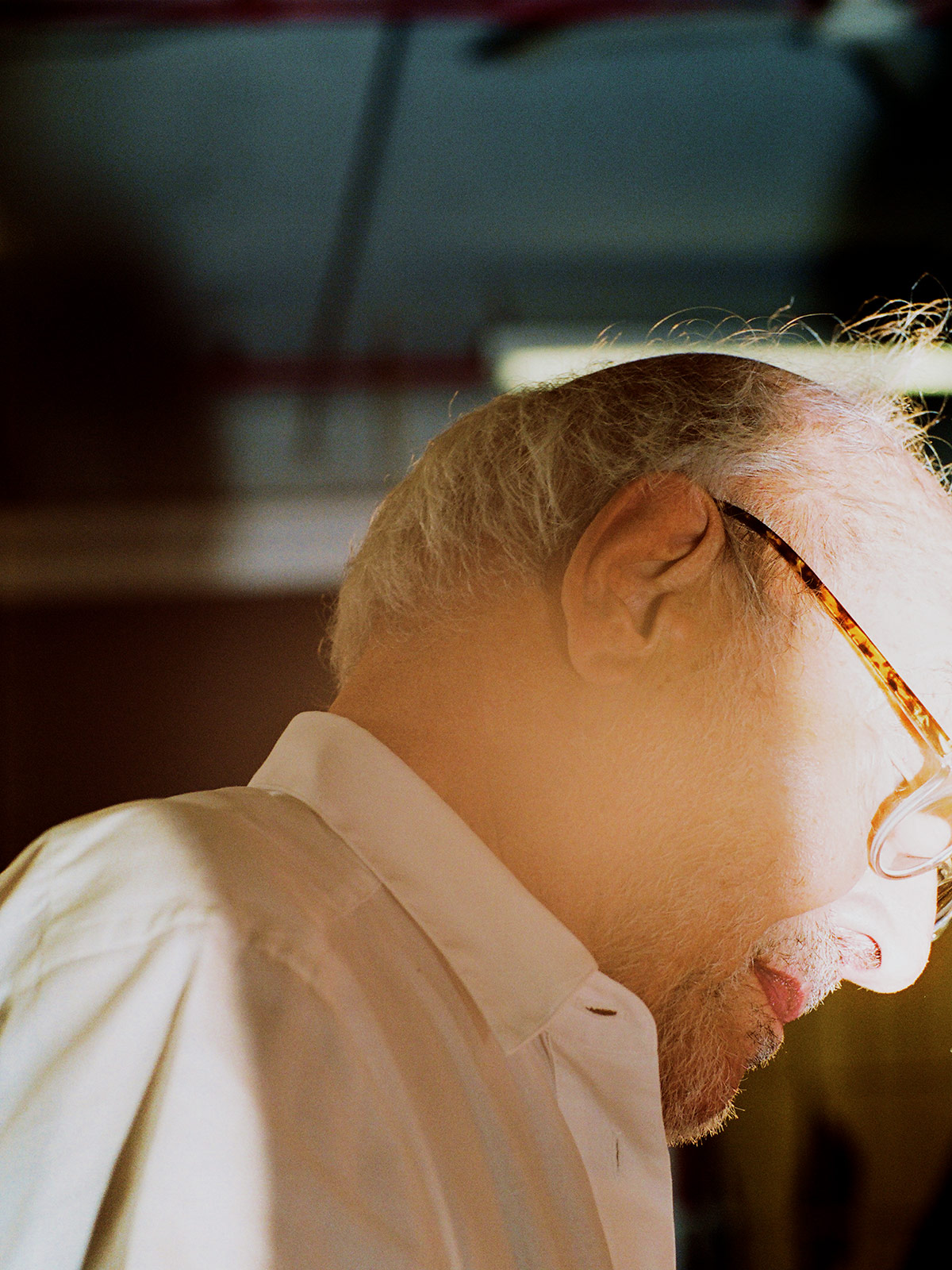 Gaetano Pesce photographed in his studio in New York.

Gaetano—The most important property of a new material would be its lightness. If I remember well, I’ve never had to deal with materials that proved their instability, but I very often discover new things when using new materials outside of the proper ways indicated by their instructions. When it happens, it is a good surprise. The liquidity of our time—inconsistent values arising to the attention of the world and vanishing quickly—makes me think that this instability must be represented by unstable materials, not because of its poor durability, but because of its different forms. If landscape means nature, I’m not very interested in it. If we are to think of the landscape as a multitude of languages—expressions and incoherences not recognizable by style—then I’m really interested and it is the most fascinating aspect of my work.

Hans-Ulrich— How does this relate to the use of design as a way of expressing politics?

Gaetano—In the past, a portrait was a practical product, and served as representation of a family or a person. If an artist made the portrait, it had also a cultural and artistic dimension. Even a painted landscape had the function of showing a place, maybe unknown by someone else. “The Last Judgment” by Michelangelo in the Sistine Chapel had the practical function of reminding the devoted people that they had to follow the precepts of the church, otherwise they would have ended up in hell. When I was young, I thought that design as well would have had the same double dimension; practical and political or philosophical and existential, etc. In this way, design can be part of the art family. An example would be my chair with the ball and the chain (“UP 5” and “UP 6”) or the “Chador” lamp, with his legs like swords piercing fe male bodies.

Hans-Ulrich—You once stated: “Abstraction is boring and limited as a mode of expression. Reducing designs means that at the end you have nothing…Minimalism was an important step in the creation of modern design, but it’s over.” With the notion of figurative versus abstract in mind, how do you define the purpose of contemporary design?

Gaetano—Contemporary design must assume richer dimensions than what has been done during the modern movement. For this reason, design must become a commentary of reality; a document of the identity of the place where it is realized and produced; and an expression of the mind of the person who created it—of his political or religious belief, of his life. Modern movement or international style brought us to globalization: to the same art, same architecture, and same objects for different places. Today, with technology, we can express the identity of people, places, countries, and—in the future—planets.

Hans-Ulrich—Relatedly, in “The Time of Questions” the space was scented with the smell of minestrone, while other works were inclusive of sound and touch as part of their design. What is it about multi-sensory stimulation within design that is so important for you? Is contemporary design more or less stimulating of multiple senses than that of the mid 20th century?

Gaetano—I wanted to communicate to the public that my work is multidisciplinary, as the minestrone has a particular smell derived from different legumes and vegetables. I’m sure that sight is the least provocative sense because it is overused. For this reason, I like to use sounds. I invited the public to touch my work, and I asked the museum’s staff to spray odors that recall my work (paint, resin, wood) in the rooms of the exhibition. The other senses can communicate in a deeper and more durable way than sight allows. I will always remember the exhibition: some Japanese visitors were crawling because the smell of rotting was not breathable. That part of the exhibition was destroyed and closed after 11 days by the director of the museum.

This conversation was featured in Document’s Fall/Winter 2016 issue. 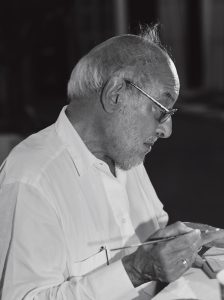 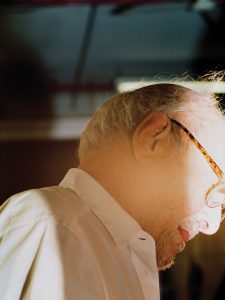