Los Angeles-based artist Buck Ellison creates strange and alluring images of seemingly banal subjects—from organic vegetable gardens to teenage girls snacking on humus in a marble-clab kitchen—that probe a certain sector of American society today. Drew Sawyer chatted with the artist about his current solo exhibition, Country Day, at the Bad Bentheim Castle in Germany, touching on realism, the Country Day School Movement, cupping, class, and progressivism. If you won’t make it to Germany before March, Ellison has a book launch at Paramount Ranch 3, with Park View Gallery, and works in the group show, Cafecito ​Organico, organized by Balice Hertling & Park View, Los Angeles next week.

Drew Sawyer—The title of your current exhibition is Country Day, which might seem a little obscure at first. How does it relate to your work?

Buck Ellison—Country Day means just that: a day in the country. And that’s a great title for the location of the show, Bad Bentheim Castle, the subject of many pastoral landscape paintings. When I hear that phrase, I also think of the Country Day School Movement, so I like that the title plays a connotation game. I’ve been reading about this movement lately, how progressive schools were founded in the late 19th century when wealthy families fled the perceived perils of industrialized cities for the countryside (now suburbs). I was interested in how these institutions promoted pastoral education, but were often funded by the people who most benefited from the industrialization they denounced: leaders of the burgeoning steel, railroad, or steamboat industries. These moments where personal politics grate against sources of means come up again and again in my work, so I thought Country Day was a good title for the show.

Drew—The show is accompanied by an announcement/poster with a list of similar adjective-noun combinations. Could you talk a little bit about this and their relation to the works?

Buck—I’m always stumped when people ask: “What is your work about?” I thought that these phrases could answer that question better than I could. Words like “lower school” or “night nurse” only circulate in a certain context, and this is the context that my pictures examine. Creating this list says a lot about me as an artist, sure, but it’s also a legibility test of sorts for the viewer.

Drew—Right, it seems like you’re betting that most of your audience will quickly recognize these terms as well as the subject matter of your work. Why did you decide to include the poster/announcement and the catalogue in the installation?

Buck—Photographs are open-ended. They can be interpreted every which way. This is a strength of the medium, and I play to this—but it can also be frustrating. Things I overhear or read motivate a good part of my practice, so I wanted to bring text into the show. So that was my goal with the poster, to create a list of words that was undeniably specific, a counter to the photographs.

Drew—You moved to Los Angeles last year after finishing graduate work at the Städelschule in Frankfurt, Germany and your most recent work deals with a certain California lifestyle, perhaps pastoral. I’m curious to know what made you move back to California, and if you think it’s changed your practice at all, coming from Germany.

Buck—Having this distance to my subject matter solidified my interest in it. Germany still has an aristocracy, many of whom were patrons of the school, so it was interesting for me to compare this to the elite that I knew, an elite that the New York Times columnist Ross Douthat so perfectly describes as defined by “its progressive politics, its social conscience, its enlightened distance from hierarchies of blood and birth and breeding.” On a practical level, it’s been easier for me to make my work in L.A., but I wouldn’t say my concerns have changed very much.

Drew—You mentioned geographical distance, and I’m also interested in this idea of distance as it relates to photography as well as aesthetics. You grew up in Marin County, California, one of the wealthiest counties in the country, and you’ve recently been photographing organic vegetable gardens at elite prep schools in the area, including the one you attended. So your upbringing has given you access to both these lifestyles and your subjects, and in a way you’re implicating yourself.

Buck—I try to be clear about this involvement. I wouldn’t be able to make my “critiques” were I not raised in the world I’m examining. I don’t want to feign a distance from my subject, but I also don’t want to be autobiographical or navel-gazing. This is a delicate balance, one I haven’t got quite right yet, but I think this confusion can be productive. It worked for Edith Wharton, who was designing country houses and writing decorating guides while she ripped her class to shreds in her novels.

Buck—My subject seemed to very actively resist its own depiction. In a society that’s formally democratic and egalitarian, no one wants to show you the mechanisms that preserve privilege. The things I wanted to depict are often so shrouded or tucked away that suddenly the camera’s mythic ability to “capture” or “expose” felt especially useful and appealing.

Drew—Many of the resulting photographs are quite alluring and beautiful. Of course, beauty can be troubling too, especially as it relates to cultural conventions and the disciplining of bodies, like those healthy and sterile white ones in your pictures. And photography has played an important role promoting and maintaining those standards in our culture. So, I have to ask myself why I find some of your pictures so appealing, which is probably what your work is about to some degree. But I want to pose that question to you first.

Buck—I link this “disciplined body” to a certain class, so including them in my pictures has always been more about realism than aesthetics. The world I’m looking at is homogenous—economically, racially, and often even physically. To ask more questions about it, I feel obligated to reproduce its surface as precisely as possible. I’m interested in how nourishment and fitness—however, holistic can become ascetic, fanatical, even violent. New kinds of doctors create new ailments, juice cleanses are spoken of with decided piety, spin classes borrow language from sermons. These are basic observations, the last thing I want to do is make work about spinning, but there is something deeper going on here, with wellness taking on an almost religious role within a formally secular group of people—which is troubling.

Drew—Your interest in realism seems to counter the growing number of artists who have been exploring abstraction in photography—and other media too of course. Here, I’m referring to realism as not only verisimilitude but also an attempt to convey contemporary life.

Buck—My inspiration for works is often exchanges or gestures observed in life, but those that happened so quickly or quietly that staging becomes necessary to pin them down, to make them visible. Last time I was back in Marin, I was sitting outside Good Earth, a health food store, and this woman in a sunhat came floating in, picked up an $8 pint of blackberries, and put them in her basket with a heavy look to her wrist, just so. The whole thing took about four seconds, but so much had happened in that tiny exchange. It actually made my stomach hurt with frustration, because it was so beautiful and so strange, and I was pretty sure I was the only person who had seen it.

Drew—Ok, so what about Sunset, for example? Could you talk a little bit about your motivation for making that picture and your process?

Buck—The jumping off point for this image was autobiographical. Bumper stickers were a big deal in high school (a country day school of sorts); they offered a way to differentiate oneself within a homogenous pool. I wanted to make a picture about that. I was attracted to the profanity of ruining the paint job of an expensive car with cheap stickers, but I also liked the tenderness of this moment where the sticker was being affixed for the first time, of identity literally in the act of construction.

So I scouted the location, cast the models, paid for the one model to get cupping, and spent a long time sourcing stickers (Patagonia, The North Face, and Save Tibet) and clothes (a Ralph Lauren shirt, a Red Stripe tank top, a ring from Thailand). These prop and styling decisions were important because I wanted to suggest that a series of painstakingly considered decisions had preceded the moment we see. These choices seem trifling, but in this microcosm of a world, where wealth and progressivism sit so close, where kids hate capitalism but don’t know what it means yet, these affiliations carry enormous weight. “Save Tibet” is political but also inoffensive, it’s not “BOOKS NOT BOMBS”; Patagonia is rugged but not as basic as Keep Tahoe Blue; a Red Stripe beer tank top is a beer tank top, but it’s not a Budweiser tank top. So there’s something a bit worldly to it, it may have been sourced on a vacation to Jamaica, a possibility underscored by the model’s ring from Thailand.

We shot for about two hours. I shoot so long so that the actions become routine; the models are putting stickers on a car rather than acting like they are putting stickers on a car. The decision to shoot at sunset was initially inspired by the flag on the “Save Tibet” sticker, which features a sun setting. But I like that it also lends a heroic light to this otherwise mundane moment.

Drew—The work of Tina Barney immediately comes to mind when looking at these recent pictures, because she’s been one of the few artists to capture a similar subject and also because she implicates her own privileged position in her pictures. But while she uses a documentary or snapshot style, you seem to deploy a commercial language or combine genres.

Buck—Tina’s work has been a very important touchstone for me. It’s clear that she’s someone with a keen understanding of painting; no one can place a figure or use a color quite like Tina. Photography encompasses so many genres, styles, and processes, to use this one or that one can mean something, but it also doesn’t have to. For me, they’re like cards in a deck; they can be played, shuffled, held back. I’m not interested in thematizing what it means to work with a scanner, for example. In this exhibition, I showed a large-format film photo, a scanner photo, a medium-format digital photo, and a stock photo I purchased. I included documentary-style photos, classical portraits, still lifes. My subject is so specific, it’s about finding the right tool—be that a camera, style, or genre—to get the job done.

Drew—Many people have read Tina Barney’s photographs as being critical of their subjects, yet she has always insisted that her images are about the social relations of her friends and family as well as line, color, and perception, as you mentioned. I think your work has a certain amount of ambivalence too. So I’m curious if you’ve thought about what it means that many of the individuals who might end up acquiring the work will likely be from the world that you represent?

Buck—If the work takes me places that are strange, uncomfortable, or—I hate this word—problematic, that probably means I am doing something right. Ambivalence, in the sense of being intensely attracted to and repulsed by the same subject, motivates all of my work. So it’s fitting that I would feel that way about its acquisition as well. 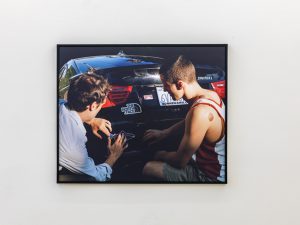 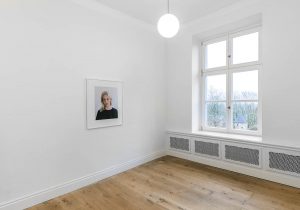 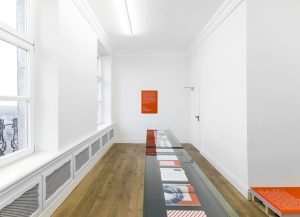 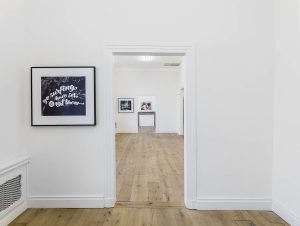 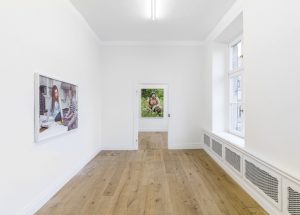 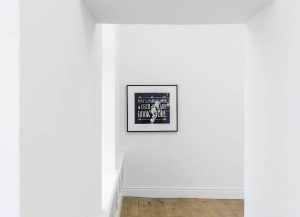 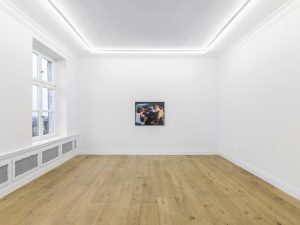 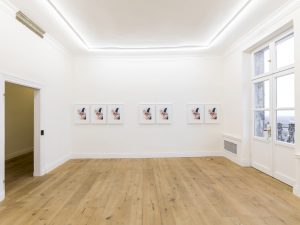