On the eve of her first major U.S. retrospective at MoMA, the German artist shared an intimate selection of never-before-seen works for Document's Fall/Winter 2013 issue.

Since the late 1970s, artist Isa Genzken’s work has served a crucial role in both the discourse and trajectory of contemporary art. Though she is best known for sculptural assemblages that join disparate consumer goods in precariously stacked monuments to consumer lust and its resultant waste, Genzken also produces paintings, collages, drawings and photographs.  The common thread that can be traced throughout her work is a profound interest in the alchemy that occurs not only when object meets object, but when object meets life. Genzken’s work is always proposing how the simple reconfiguration of formal or visual syntax can ultimately result in the dramatic reconfiguration (or complete obsolescence) of meaning. Her work thrives off of these possibilities while simultaneously suggesting a conceptual relationship between material culture and language.

In an exclusive series of photographs taken of the window displays for musical instrument stores in Berlin in the 1970s, Genzken presents us not only with the fetishistic visual appeal of light bouncing off of curved metal, but also charges her viewer with a kind of tactile anticipation; we see buttons waiting to be pushed, keys pressed, dials turned, we hear the low sound of each instrument’s tone, the promise of what could happen were they played together.  The instruments in these photographs wait to be found, to be touched, to be played; they speak to our desire, but they also speak of the impotence of all things that reside outside the sphere of interaction. 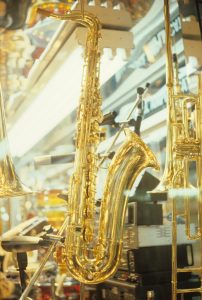 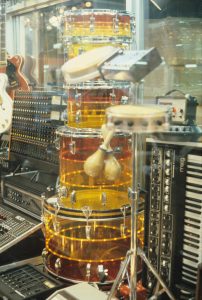 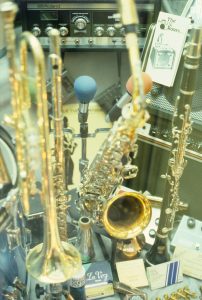 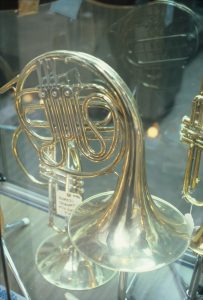 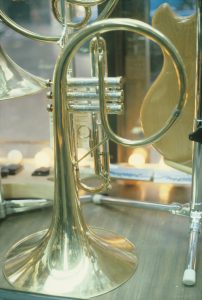