Architect Wang Shu wants to kill all the icons

This year’s Pritzker laureate caused an upset in the world of architecture. Aric Chen puts the speech that shook the profession into perspective for Document's Fall/Winter 2012 issue.

When architect Wang Shu was awarded the Pritzker Prize earlier this year, he became the first Chinese citizen to receive the profession’s highest honor. However, the name that he and his wife, Lu Wenyu, have given their Hangzhou-based firm—Amateur Architecture Studio—signals their rejection of China’s architectural mainstream and its propensity for mega-developments and flashy, iconic showpieces. Instead, in projects including the Ningbo History Museum and the extraordinary Xiangshan Campus for the China Academy of Art in Hangzhou, Wang, 49, has created a contemporary language drawn from China’s traditional spatial concepts and vernacular notions of craftsmanship and built form. All the while, he has been an outspoken critic of his country’s hyper-drive development and the social, environmental and cultural damage it often sows.

Delivered on May 25 in Beijing, Wang’s acceptance speech for the Prize deftly summarized the challenges of a vocation that, despite a millennia-long lineage, is still a fledgling profession in China, while openly challenging the nation’s governing socio-economic system. Significantly, he was able to do so within the hushed, formal environs of the Great Hall of the People, where Li Keqiang, who is likely to be the country’s next Premier, presided over what was no doubt a tightly scripted event. In a nation where the power of symbolism should not be underestimated, let’s take this as a good sign. 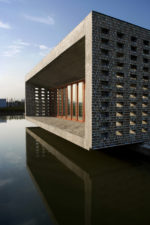 “Winning this award is something that I had not expected. For many years, I have been pursuing my dream on a solitary course. Before this award, I had never published any architectural design collections or designed any buildings outside of China. I always see myself as an amateur architect, so it was a huge and pleasant surprise for me to receive this honor (1). I wish to thank the judges for their insight and comments.

As the first architect born and educated in China to win this award, (2) I accept with both honor and reverence. You should know that China, despite its great architectural tradition, has not had an official system for professional architects over the past thousands of years. Modern architecture as a profession, starting from my teacher’s teacher, has only been in existence for three generations,(3) making this award one of special importance for Chinese architects. A young architect myself, I have to say that I owe this award to the age we now live in. It is in this golden age that China has achieved unprecedented prosperity and openness, giving me so many opportunities to make difficult architectural experiments in a short span of time. Here, I wish to thank my partner Lu Wenyu and all my friends who have helped me before. Yes, I can see some of you in this room today.

Maybe it is because the professional architecture system in this country is still in its infancy stage, or maybe it is because so many things have happened in the past decades, but I still remember that 30 years ago, when I was studying at the architecture department of Nanjing Institute of Technology, “What is architecture?” was the question most often raised. Once, Mr. Tong Jun, my respected professor, who is also the first architect in modern China to study traditional gardens, (4) was asked this same question by a humble student. His answer was simple, “Architecture is just a small thing.” (5)

Yet, it is this small thing that has profoundly changed the outlook of China and the lives of the Chinese people over the past 30 years. It has been a process full of experiments and confusions. As an architecture student who had read too much philosophy at school, I first embraced modern architecture with full passion, and then quickly turned my attention to post-modern architecture. Just as I was starting to feel bored about the extensively artificial features of the modern buildings, I fell in love with deconstructivist philosophy and architecture. I was so excited that I even designed and built several deconstructivist buildings myself. But throughout the process I was confused by the same question, “Are my buildings deeply rooted in my own culture?” This was one of the reasons why I chose to live in seclusion in the 1990s. (6) I withdrew from the professional architecture system, and turned to the renovation of old buildings.(7) I spent days and nights working with local craftsmen. And I realized that compared with modern buildings that are more about fabrication, there is another type of building that recognizes things that are already in existence. Unlike modern buildings that focus on abstract space, this other type of building focused on creating a sense of place and connecting with the past. And compared with buildings carrying a strong human imprint, traditional Chinese buildings are closer to nature, taking architecture to a whole new horizon. It is an entirely different world of architecture that I had never seen or learned before, but it contains something more valuable than what modern buildings can offer. If modern architecture is all about the professional architecture system, I would rather call myself an amateur.(8)

All my architectural activities so far have taken place in and for China, but the issues involved in these activities are not confined to China. Many of the architecture-related issues that have emerged in China amidst tectonic changes in the past decades have all been experienced in other parts of the world, although they are taking place in China on a larger scale, with a stronger impact and at a faster speed. In a country that only had craftsmen but not architects just 100 years ago, such changes have resulted in a sharp conflict of civilizations. Therefore, architects should not just see themselves as professional technicians, but also demonstrate a wider perspective, deeper thinking, clearer values and conviction.

In all of my architectural design activities I have constantly asked myself the following questions: How can an architecture founded on craftsmanship survive in today’s world? What is the relevance of the traditional Chinese landscape system in a world filled with gigantic artificial structures? In a society undergoing massive city-building campaigns, how should urban development be handled without resorting to major demolition and reconstruction? (9) How can new urban buildings connect with memories of the past–that might be otherwise lost as structures are demolished–and re-establish their cultural identities? What can be done in the realm of architecture to overcome the stark contrast between urban and rural areas in China? Is it possible to ensure that alongside the top-down professional system of modern architecture, ordinary people’s rights to initiate their own building activities is also protected? (10) Is it possible to find smarter ways for addressing environmental and ecological challenges by drawing on the wisdom found in traditional architecture and grassroots building activities?(11) Is there a way for us to express our architectural pursuit with stories and feelings without resorting to gigantic, symbolic and iconic structures? How can an independent architect maintain the attitude and work style against the background of a powerful modern system?

2 I.M. Pei, a naturalized American, was the first Chinese-­born architect to win the Pritzker Prize, in 1983.

3 For most of Chinese history, craftsmen constructed buildings and followed standardized models. The beginning of China’s modern architecture profession, as we now think of it, is usually attributed to a generation of Chinese who studied abroad in the 1920s, especially at the University of Pennsylvania, and returned to China to found its first architecture schools. After Mao Zedong’s declaration of the People’s Republic in 1949, architecture became an implement of state control but, like nearly everything else, it suffered under the Cultural Revolution of 1966-­‐1976, when intellectuals were crushed and China’s universities were shut down. Upon Mao’s death and the opening up and reforms initiated by his successor Deng Xiaoping, beginning in the late 1970s, the field continued to be dominated by government design institutes. It was only in 1994 that the government began to allow private architecture practices.

4 Tong Jun (1900-­1983) was among a storied group of 25 Chinese, including Liang Sicheng and Yang Tingbao, who studied architecture under Paul Cret at the University of Pennsylvania in the 1920s. Upon returning to China, and the onset of the Sino-Japanese War, he began his highly influential studies of the classical Chinese gardens in and around Shanghai, Suzhou and Hangzhou.

5 According to Tong Ming, his grandson, the elder Tong was referring to a historical Chinese understanding of architecture that placed less emphasis on the form or monumentality of a building than on the relationships among buildings and landscapes, by which buildings were just one part of a whole. This made a deep impression on Wang, who has continued to develop these ideas in his work.

6 As China opened up in the 1980s, many Chinese eagerly embraced foreign ideas to which they previously had no access. For Wang, this included the writings of Swiss linguist Ferdinand de Saussure, French anthropologist Claude Levi-­‐Strauss and the German philosopher Martin Heidegger, in addition to postmodernism and deconstructivism. However, Wang soon recognized the need to return to his native traditions, which the Cultural Revolution had devastated and now had to in many ways be relearned. His “period of seclusion” included time spent in Hangzhou, where he currently serves as head of architecture at the prestigious China Academy of Art, and at Tongji University, in Shanghai. At that time, Wang struggled in both places, since many of his instructors and peers rejected his ideas. He could often be found alone, practicing calligraphy.

7 Among these was a mid-­20th century warehouse that was converted to a gallery, for the China Academy of Art. It has since been demolished.

8 Wang and Lu’s firm is run more like a studio than a professional practice, with only a handful of former students working for them at any time. Wang does not use a computer, and makes all his drawings by hand. He has worked with the same construction crew for the past decade, and his students are expected to learn and engage in building techniques, in addition to design.

9 This year, for the first time in the country’s history, China’s urban population exceeded its rural population. Some predict that an additional 300 million people will migrate to China’s cities over the next 20 years. The push towards urbanization is aided by government ownership of land and enormous pressures to boost local economic growth, resulting in huge swaths of land being developed at a hurried pace and often with little regard to existing conditions.

10 The vast majority of construction in China is the result of arrangements between local governments and large developers. The inability of individuals to build on their own has resulted in extreme homogeneity within and among Chinese cities.

11 Wang is known for his use of recycled materials and sensitivity towards existing natural systems and landscapes. Author’s Note: Special thanks to Professor Tong Ming for contributing to this article. 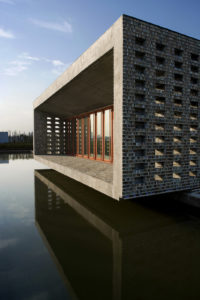 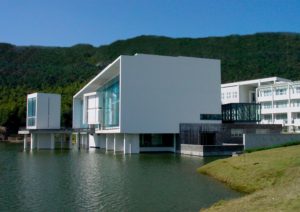 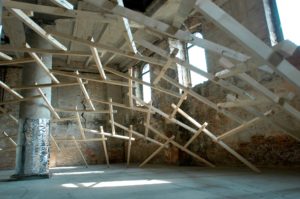 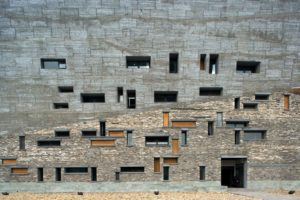 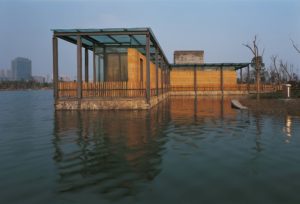 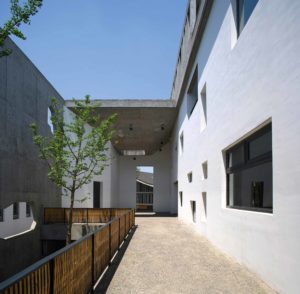