Twenty creatives across disciplines pay tribute to the museum through short-from videos, recognizing the Louvre as an evolving site of modern art

The Louvre has invited 20 contemporary artists to create their own “Louvre Looks,” showcasing a variety of unique perspective on the museum as it enters its 230th year. The artists—all of whom are under 40—were given the space of a three-and-a-half-minute video to examine one of the world’s best-known art institutions, through their own lens. Laurence des Cars, the museum’s President-Director, described the series as a “highly personal yet universal [way] of responding to [their] collections. [The artists] show us different ways of looking at the Louvre and new, contemporary ways of creating with the museum, confirming its role as a contemporary site of art.”

The diverse backgrounds of the artists, who come to this project from a range of artistic mediums, are reflected in the breadth of the approaches they take. While much of the roster comes from the field of visual art, it also includes DJs, musicians, and designers, among creatives of other disciplines. Some utilized film crews, while others opted for cell-phone cameras; some worked at night, while others worked during the day. In the process of creating her work for the series, painter Ariana Papademetropoulos asked, What would I like to do in the Louvre that I could never do otherwise?—viewing the show as an opportunity to explore the museum space beyond what’s afforded to the typical visitor. Performance artists Miles Greenberg and Hicham Berrada both turn to the museum’s statues as the focal point of their projects, contrasting the notion that these artworks are everlasting by pointing to their almost-human impermanence.

Others chose to use this opportunity to study the museum’s past, such as Mimosa Echard’s mission to track the history of makeup through the collections. Mykki Blanco and Dachi-Giorgi Garuchava contended with the legacy of the Louvre as one that “incarnates the upper bourgeoisie, but also the Revolution and radical change.” This multitude of perspectives culminates in a view of the museum that proves its dynamism, despite its age. Louvre Looks additionally features videos by Iván Argote, Anton Bialas and Kamilya Kuspanova, Bianca Bondi, Guillaume Bresson, Jacob Bromberg, Théo Casciani, Pan Daijing, Jennifer Douzenel, David Douard, Eliza Douglas, Rafik Greiss, Marie Jacotey, Christelle Oyiri, Edgar Sarin, and Marine Serre.

The Louvre will present all 20 videos through a screening on January 26, in the Michel Laclotte Auditorium, as well as at the Louvre-Lens. After this launch, one video each week will be shared with the public through the museum’s digital platforms. 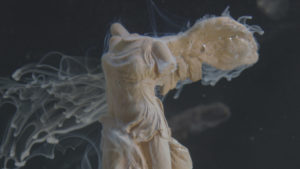