A car crashes in slow motion—the slowness is subtle, an effect that drives eeriness more than drama. Tom Heyes, known by the moniker Blackhaine, is crumpled into the backseat, his usually imposing pale figure shadowed, lit only by passing lights on the motorway. “Red blood leaks down my chin / These streets porcelain,” his voice echoes behind a swelling soundscape, and colorless street maps flash violently before revealing Heyes stretched on the ground, a spot of white amidst the night. Blackhaine is dead.

Heyes’s latest EP, Armour II, is weighted by the trauma and terror of its poetry, set over experiments in a sound best identified as drill noise, often offset by soulful interludes. Perhaps most widely-known for his choreography work on projects like Kanye West’s Donda 1 and 2, Heyes’s affinity for movement translates to a cinematic sound, which ebbs and collapses with intentionality. With producer Rainy Miller, he elaborates on the psychodrama set in Armour’s first installment, expanding its capacity for storytelling by including a series of features from Blood Orange, Iceboy Violet, Moseley, and KinseyLloyd. The rage in Armour II is less explicit than it is in Heyes’s previous works, but still sits at the core of his sound and lyricism as he explores themes of paranoia and guilt.

In anticipation of Armour II, which was released today, Heyes joins Document to reflect on its making and the evolution of his artistry.

Megan Hullander: What is the connective thread that makes these songs something cohesive?

Tom Heyes: I think it’s thematically and narratively. We shot the videos of three of them in different order. They’ve been released in different order. I think the narrative is so personal to me, and I’ve abstracted it to such a degree that I always wonder [if it would make sense to an outsider]. But I don’t really care, to be honest. [That] isn’t my job.

Megan: The themes in your work have consistently been pretty dark, and that carries through with this release—there’s a lot of life and death and guilt on it. What do you see the larger cultural, social, or political function of art being now? Or do you think it’s the same as it’s always been?

Tom: I think it’s the same. The audience has changed—I think they’re either super invested or just washed from stuff. The middle is just a lot of white noise. I think I’m more invested in artists that I hate nowadays. Personally, I just take from art what I want. I’ve never been one to contrive [any] cultural impact of it.

Megan: When you say that you feel like more invested in artists that you hate, what do you mean by that?

Megan: With that sort of cultural saturation, how do you create something that feels fresh?

Tom: I don’t actually do that. I think something that naturally happened, because of my art, maybe stemmed from a place that’s very current and mainstream. But then me, as Tom Heyes—my life has informed how I’ve done it. And I think as well, like, geographically, I’m never going to be able to do it like guys in London. That takes a lot of pressure off; it’s actually quite free entertainment. It doesn’t mean that you have got to go and do what everyone else is doing. I can just do my own thing. And if people want to watch, then sick. If they don’t, I’ll still be doing it.

Megan: When you’re writing or performing, do you feel like you adopt any sort of persona? Or is it really you?

Tom: If we’re talking about, like, an hour set, it’s absolute blindness. I don’t want to romanticize it, because it’s just one of them things. It’s just a different kind of lens; it’s stuff that I’ve evaluated differently than my private life. But then that’s come because I’ve kind of talked about it with some sense of immediacy in my art. I don’t believe in a character, but I think there’s definitely a difference. There’s definitely a side of myself that I like to exercise.

Megan: When you look back on your past work, do you feel it resonates in a different way than it did when you were making it? Or do you think it might be too ‘early days’ for that?

Tom: I think it’s too early days, but I think it’s interesting to see how it’s developed. It’s funny you say this, because I was actually doing this last night. I think it was a lot rawer. When it was just me in a hotel room, it was a lot more violent and, obviously, I was on hard drugs at the time. But I think, you know, I think I’ve still kept that sense, but I’ve just built a context around it. I feel like it’s depressing, a true anger. There’s only a few moments in my music now where I thought maybe I went a bit too far with it. I don’t think my art is perfect.

Megan: How does it feel to be done?

Tom: I don’t know. It kind of feels good. I’ve only finished very close to the release, so it’s only been, like, two months, maybe a month ago that I finished. I’ve not written a word since then. I’ve been playing all the songs out, and I was like, Fuck, some of these songs have worked in ways that I didn’t think they would. Like, the ‘Armour Freestyle’ song in my set usually comes after quite an ambient noise part, and it goes straight into that, and it fucking lights up the room. I think it’s only finished when you’ve played out live. I don’t think the release is the end of the project.

Megan: I imagine it doesn’t really have that same feeling of completion, as well, when it’s something that’s a part of the larger series.

Tom: I’m literally going to the studio after this. But I think this is the end of the story. With Armour II, that’s kind of me killing that Blackhaine character. It’s funny, I’ve never been in a car crash, and then I finished writing the album and I got in a car crash. That’s always how it happens, isn’t it? 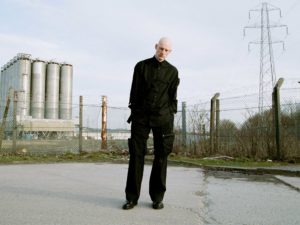