In her latest collection for Aries, Sofia Prantera leans into nostalgia and naivete

Sofia Prantera was seeking inspiration for her new collection when she heard a song. The softness, awkwardness, naivete and youth of “Do You Have Friends in Your Dreams” by Very Nice Person became key themes of Aries’ Spring/Summer 2023 collection, which debuted during Paris Men’s week.

The collection is comprised of five chapters, each dedicated to an archetype: the Camden Punk, the ’90’s casual and teenage romantic, the cultist, and the trust fund baby. Within the cultist archetype, an Aries cult classic look is reissued from the archive vault, seen in photos exclusive to Document. For this look, an all-over newsprint documenting the contentious messaging on Ozzy Osbourne’s “Suicide Solution” is set on Aries Lilly denim and recognised Aries oversized shirting.

Raised amongst strongly defined subcultures in the UK, Prantera understands the alienation that can come along with these separations; even when you are part of a group.

“When you’re growing up within a subculture, I think you probably do feel fraudulent,” Prantera, designer and cofounder of Aries, says. “And it’s afterwards that you realize you were part of that, and you belonged, and you helped form it. I think the whole collection is possibly more about that feeling of naivete and fraud that you have as a young person interpreting those stereotypes.”

Prantera’s obsession with subcultures played a significant role in the conception of her collection. She has been an iconic presence in the streetwear world since the ’90s, and remains a paramount figure in a largely male-dominated space.

Madeleine Beck: I read that the theme for this collection started out with a song. Can you talk about that experience in depth?

Sofia Prantera: The song was sent to me by a close friend who lives in LA, and is by this really young band called Very Nice Person. She sent me the SoundCloud saying, ‘See if you like this, they really liked your clothes.’

It’s funny because you design a collection during winter for summer and during summer for winter, and sometimes it’s quite hard to be really true to the season while you’re designing it. But [the song] brought [forward] this idea of a lazy summer, which I think really reflected where my head was at. Up [until] now, with lockdown and everything else, we’ve lived very virtually. I was in New York maybe two months ago, and I started getting this yearning for real life experiences. I think this song is very disarming. [It’s] beautifully constructed, [with] amazing harmonies that are sort of reminiscent of The Beach Boys. I think it just felt right to start with something a bit less virtual and strong, and something that was a bit more experience-led, and had a nostalgic quality to it. That made me realize that that was what I wanted to express this time with the collection—something more youthful, and less constructed, and more real.

Madeleine: What were some other inspirations behind the collection?

Maybe the recurring theme is youth culture, but this time it’s youth culture seen through the eyes of the people that populate it, rather than a strategic view of [it]. We have a lot of really young people in our office and we work alongside a lot of models that are not just chosen from a modeling agency—they hang out with the brand, they’re part of the brand, and it was a way of creating something with them rather than about them.

I think [the video] shows them participating in it because it was literally just them sitting in front of the video camera, singing along the song, and just sort of being stupid and kind of awkward. It feels like their own sort of little subculture, even though we were dividing the theme into subcultures. The video itself was made by them, and for them, so I think it’s more truthful to the feeling that I wanted to achieve of naivete, which is hard to recreate sometimes. Especially as your capabilities become better, it’s hard to go back and say, ‘What was so interesting about what I did when I first started doing this?’

Madeleine: Do you feel like when you were growing up, you identified with any of the archetypes included in your collection?

Sofia: I always felt slightly fraudulent [in] all the different subcultures I lived through. I grew up on the backend of punk, so I was too young to experience that. When I came to London, rave culture was starting, and even though I was a part of that—I was going to raves and things like that—I always felt that I was sort of impersonating that person.

I think what’s interesting about British subcultures is [that the] people [who] are into those subcultures are very faithful to them; they will be a punk or a raver to their death. For me, it was more [about] celebrating youth culture in general, which is what attracted me to the UK in the first place. I think, actually, they were jokingly talking about the Camden Market guy, or the sexy punk princess, or the dreamer—it’s a slight reconstruction of those ideas, rather than a very literal [interpretation of them].

When you’re growing up within a subculture, you probably feel fraudulent. And it’s afterwards that you realize you were part of it, and you belonged, and you helped form it. The whole collection is more about that feeling of naivete and fraud you have as a young person interpreting those stereotypes. 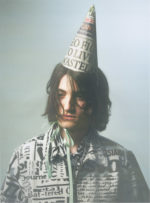 Madeleine: Do you have a favorite piece or look in the collection?

Sofia: For me, it was the carabiners. We’ve used them a few times, but I think this year, we’ve managed to really integrate them within the collection. I think it has the classicism of Aries, and it has that element of luxury, [but also] of punkness.

Another piece that I felt really happy with, which is something that we do for many seasons, is the silk pajamas. [They are] completely unisex, and it looks fragile and old, which is really beautiful–even though it’s still gone through a similar process of digital printing, it’s what we built into the frame that makes it feel really fragile, and old, and collectible.

Madeleine: Why do you think that this collection, which encapsulates youth and nostalgia, is important to the current cultural moment?

Sofia: I found that maybe there is a return to a DIY culture that has been less present in recent years. Fashion repeats itself and goes through cycles, and as we see those cycles, you see shifts. I feel that there is a shift to something that feels a bit more innocent, and a bit more self-made.

Sofia: Obviously you want the collection to be successful, but I think you also want to inspire people around you to see that you’re able to make a difference.

I feel that if I had the opportunity to see how the creative world worked [when I was younger], I would have suffered less [laughs]. And I feel that we’re maybe less guardians of what we do, we’re more open with our processes, we’re less—what are they called? Gatekeepers. [Laughs] The way we operate is less as gatekeepers of work. I think a lot of the time you feel, as you’re growing up, that magic happens because of a reason. And I think when you actually see people at work, you see that the reason these things happen is not magic. There’s a lot of hard work, there’s a lot of experimentation, and there’s a lot of confidence in what goes on, and I think that if I had more confidence as a youngster, it would have been very advantageous to me, and would have saved me a lot of insecurities. Things really happen because people are just working really hard, there’s no magic recipe to it, it’s just about believing in something and working as hard as you can. Nothing worthy in the long run happens because of luck. It’s always because people are working really hard. 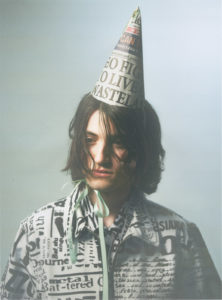