There’s a well-loved origin story behind Chanel’s tweed jacket: Coco would don the hunting attire of her then-lover, the Duke of Westminster, and eventually decided to make it own. “There’s nothing sexier than wearing the clothes of the person you love,” said Virginie Viard, current creative director of the French house. “Of course, I’m fascinated by this ever-contemporary gesture.”

Such a fascination led to the devotion of Chanel’s entire Fall/Winter 2022-2023 collection to tweed. It’s not an unexpected move—nor was it meant to be. Viard called it a tribute: “We followed the footsteps of Gabrielle Chanel along the River Tweed… She would gather ferns and bouquets of flowers to inspire the local artisans for the tones she wanted.” 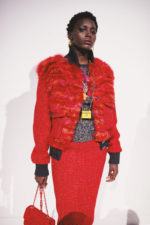 The show was a modern take on that process: Models walked under the arched ceiling of the Grand Palais Éphémère, whose walls and floors were swathed in the fabric of the season. The colors diverged from the purely natural, at least in regard to the English countryside: Jackets, coats, and skirt sets appeared in bright turquoise, burgundy, pinks and purples and oranges. Viard called them “psychedelic” tones, citing inspiration in the ’60s and colorful record covers. The tweed pieces were paired with velvet and leather trousers, thigh-high socks, and rubber sporting boots. Most models carried handbags, and all were accessorized in their own right—statement necklaces and bracelets were everywhere.

The show was a display of confidence in a tried and true method, for better or for worse. Undoubtedly, Chanel’s tweed has secured its place in fashion history, as an iconic and forever-classic garment. “I love working with it so much,” admits Viard, “I couldn’t live without it.” 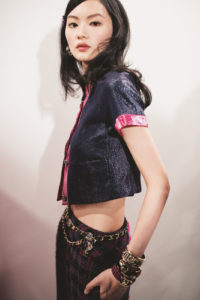 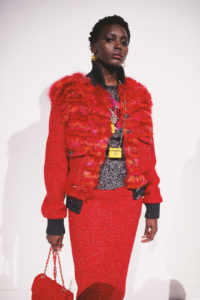 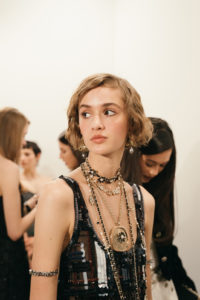