For Fall/Winter 2022, Miuccia Prada and Raf Simons play with theater and reality, luxury and pragmatism, and coveralls and suits

For its Fall/Winter 2022 menswear collection, Prada holds a mirror to reality. It’s not an exact reflection, nor is it meant to be. Instead, co-creative directors Miuccia Prada and Raf Simons adopt the posture of theater, to interpret pragmatic clothing through the lens of occasion—of luxury—weaving its sartorial signifiers with the fibers of workwear.

The show, titled Body of Work, was held this weekend inside the depository at Milan’s Fondazione Prada. Its set, designed by AMO, was industrial and rather futuristic, favoring projected light and metal caging. The cast was star-studded. Prada called up a crowd of actors—Thomas Brodie-Sangster, Asa Butterfield, Jeff Goldblum, Damson Idris, Kyle MacLachlan, Tom Mercier, Jaden Michael, Louis Partridge, Ashton Sanders, and Filippo Scotti—to walk its sharply-angled runway. “Actors are interpreters of reality,” explains the brand’s press release, “employed to echo truth through their portrayals. Real men, recognized figures, they bring a new facet of reality.” 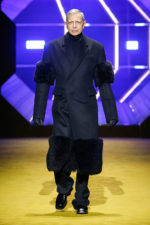 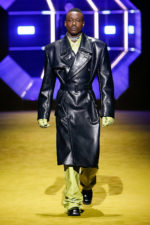 The collection wants to endow so-called “uniforms of reality” and their componential pieces with new dignity. The business suit gets fur—not just at its cuffs, but also around the elbows and at the hem. Coveralls are brought in, printed with graphics, and colored in yellow and pink. Bombers are cinched with matching belts. Boots are square toed. Everyone wears leather gloves.

It’s a sign of respect—an act of “eschewing hierarchy”—Prada figures, to reimagine pragmatic garments in fine material, with fine tailoring. “Through fabrication and methodology, an equal gravity is given to each genre of clothing,” writes the brand. “Every facet of reality is offered significance, a sophistication and esteem, a lasting value.” 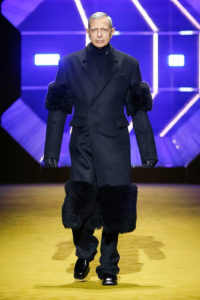 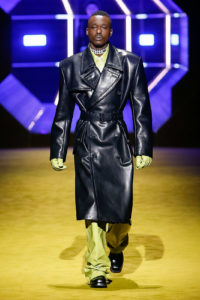