With dazzling beads and blossoming florals, Kim Jones’s inspired collection for Dior promises luxury in an age of functionality

The House of Dior’s impeccable ability to refine and interpret French heritage was proven once more in its Men’s Winter 2022 collection. Struck by the nature of history—the idea that heroes are immortalized as statues that we might happen to notice as day breaks, and makes them golden—Kim Jones, creative director of Dior Homme, sought to intertwine past and future values with functional looks made precious with glittering or blooming adornments. 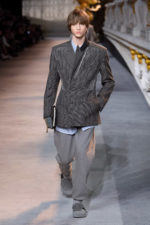 On what would be his 117th birthday, a recorded monologue by Christian Dior echoed throughout the set. It seemed to cleanse the show—a blessed walk along the Seine. Although the house presented its collection in the ultra-informed and indisputably elegant tradition it’s known for, Dior was not immune to the loungewear trend that has crept into haute couture, and our own closets, in recent years. Jones defines that comfort with an air of sophistication. Soft, cottony fabrics were given light-catching, head-turning embellishments. A wool sweater and a pinstripe button down were layered under a vinyl leather jacket. A dazzling beaded overlay vest was tucked between a shirt and blazer. Dotted throughout were caps in satiny finishes, and airy tones of blue, cream, and gray dominated.

Quintessential trench coats were cinched and twisted at the waist, in a blending of masculine and feminine ideals. Also presented was Dior’s collaboration with Birkenstock, which reimagines the somewhat utilitarian shoe. They feature Dior branded buckles in brown, taupe, and gray suede and felt, some with the same delicate, floral appliqué seen throughout the collection.

For Dior, the history is in the details: tucked into pockets or printed on coats, embodying the tradition of a past life, and breathing the hope of spring into winter. 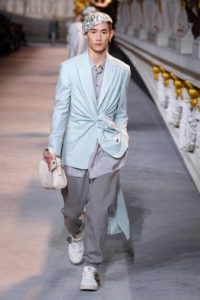 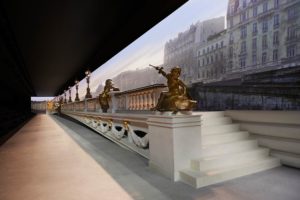 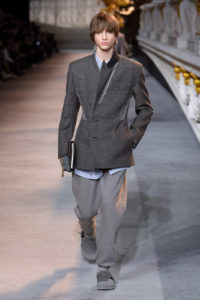 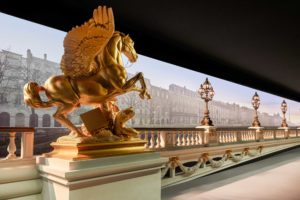