Designing a set fit for Dior

Architect Shohei Shigematsu and curator Florence Müller discuss the exhibition design for the Denver Art Museum retrospective, Dior: From Paris to the World.

The world’s largest Christian Dior retrospective has come and gone. Paris’s Musée des Arts Décoratifs unveiled an exhibition of 300 haute couture garments displayed on grandiose sets spanning 3,000 square meters (32,292 square feet) in celebration of the house’s 70th anniversary last year. With over 700,000 visitors, Christian Dior: Couturier du Rêve generated the most foot traffic of any show since the museum’s opening in 1905. It seems a daunting task to replicate that success anywhere, especially in Denver. Nevertheless, the Denver Art Museum was selected to be the institution for Dior’s first major retrospective in the Americas. Curated by Florence Müller — who also worked on the 2017 show at MAD Paris — Dior: From Paris to The World, which is on view through March 3, 2019, offers a different perspective on the house through art, photographs, archival materials, accessories, and never-before-exhibited garments presented on a set designed by architect Shohei Shigematsu, a partner at Office of Metropolitan Architecture (OMA) and the head of its New York office.

This is not the first time Shigematsu has been tasked with designing a fashion exhibition. He conceived of the scenography for 2016’s Metropolitan Museum of Art show, Manus x Machina: Fashion in an Age of Technology and Prada’s 2006 skirt-centric show titled Waist Down. To prepare, he visited Christian Dior: Couturier du Rêve in Paris. “The classical environment matched these beautiful dresses really well,” Shigematsu says of the MAD Paris show in the Louvre’s west wing.  “But it also made the show a little more about the glory of the brand and less about the garments themselves.”

What Shigematsu is referring to is the faux florae-drenched sets awash in colorful lighting conceived by French scenographer Nathalie Crinière. By contrast, the 45-year-old Japanese designer’s set for the DAM exhibition is a muted, contemporary environment that supports the clothes without overpowering them. All but one of the show’s 15 sections—some arranged thematically, others chronologically by the head designer, from the label’s namesake to its present keeper Maria Grazia Chiuri—are housed in the museum’s Anschutz Gallery. While accommodating for art, the space on the second level of the Daniel Libeskind-designed Frederic C. Hamilton building is not so great for displaying undulating, ultra-feminine silhouettes. “It’s not very friendly,” admits Shigematsu. “It has a lot of angled walls and doesn’t have a classical notion of rooms.” 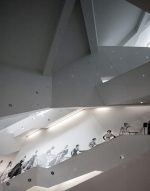 Using sheets of corrugated and curved aluminum in shades of silver and copper, Shigematsu has transformed the rather inconvenient set up into a series of cell-like rooms. “Before Shohei designed the project, he looked at the dresses, and like a fashion designer, created a book of references,” Müller explains, noting how uncommon it is for set designers to take interest in the subject matter. “They don’t always care about the objects or want to know about them, but Shohei wanted to be totally immersed in the story of Dior.”

As a result, the winding path that unifies the sections into an enfilade takes cues from the walkway through Dior’s garden at Granville in France. The half-circle platforms that climb up the Martin and McCormack Gallery’s sloped walls in the show’s finale — 50 looks arranged by the regions that inspired them — mimic the petals of Dior’s iconic “Junon” dress.

Although Shigematsu’s environment is a more grounded concept befitting Denver—and nowhere near as ornate as Crinière’s—it still manages to convey the glory of Dior. A wall made up of laser-cut aluminum pieces shaped like the flat pattern of a Raf Simons-era coat sits over a series of intricate, 1950s embroidery samples. The “Office of Dreams” section—named after Dior’s moniker for his studio—displays 25 crisp, white toiles (prototypes of garments made with cotton muslin) that elaborate on the house’s savoir-faire while sections dedicated to legendary fashion images and the women who adopted Dior illustrate the house’s cultural impact.

“With fashion exhibitions becoming blockbuster shows for museums, there’s a healthy debate focused on whether or not fashion is too commercial to be considered art,” Shigematsu says at OMA’s Varick Street office in Manhattan a week before the show’s opening. “I enjoy the instability of the status of fashion exhibitions because it allows for room to experiment, which is difficult with fine or contemporary art.”

Now that Müller and Shigematsu have unveiled their exhibition—a seamless fusion of architecture and fashion that’s successfully avoided feeling overproduced—the question of whether or not people will come to see it in Denver remains. There’s nothing around Denver for miles and miles,” Müller says, noting that the city’s airport is the fifth busiest in the country. “It’s like an island.” VIP hotel packages complete with skip-the-line tickets for the show have been designed to entice tourists and wealthy vacationers on their way to Aspen and Vail to make a pit stop at the museum. As for getting locals through the door, that should take of itself.

“When Yves Saint Laurent took over at Dior in 1958 it was the most powerful fashion house in the world,” Müller says. “It was doing half of the luxury export of France. It was the first fashion empire in the history of the world.” As a frequent traveler who went on to open boutiques from London to Caracas and license his designs all the way to Japan, Dior reached women across the world; no place was too off the beaten path. He’d likely feel the same way about Colorado. For that reason, Müller and Shigematsu’s efforts to bring the house’s story to life in the Mile High City make more sense there than in L.A. or New York. For the first time in Denver, Dior truly feels like it belongs to the world. 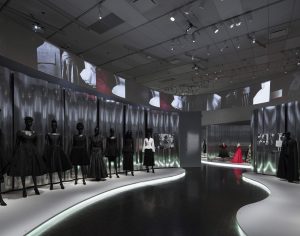 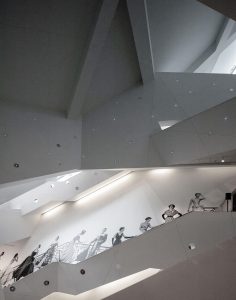