With his sophomore album ‘Limbo,’ the genre-blending rap visionary is already leaving a legacy

The first thing you notice when speaking with Portland-born, LA-based rapper Aminé is his jubilant charisma. Even when conversing with a stranger over the phone, his words are loaded with a palpably bouncy cadence (and just a whiff of a nasal inflection). He introduces himself with his given name, Adam, exuding remarkable humility for an artist who just released one of the most critically acclaimed albums of the year and snagged a Grammy nomination in the process.

Aminé hails from Woodlawn in the Northeast part of Portland, Oregon, a residential neighborhood that is vastly more diverse than the rest of the overwhelmingly white city and state. The Rip City MC exploded into the public sphere in 2017 with “Caroline” from his debut studio album Good For You. A monumental track in every sense of the word, his breakthrough single has since gone four times platinum, spent weeks in the Billboard charts, and made countless viral appearances on TikTok and Instagram. Then came “REEL IT IN” and its subsequent Gucci Mane-assisted remix from 2018’s OnePointFive, a mixtape-style EP that flaunted Aminé’s intoxicating bars and playful melodies.

We’ve now arrived at Limbo, Aminé’s second full-length LP that puts to rest any fears of a sophomore slump. Recorded over the past two years, Limbo is a razor-sharp effort from a rapper truly coming into his own skin. Oozing with the contrasting but surprisingly compatible influences of indie rock, LA hip hop, and sonics seemingly plucked from the humid air of the Pacific Northwest, Aminé’s latest rejects trends and shows the power of individuality. The deluxe edition, released on December 3, adds seven new songs to the top of Limbo with features from Valee, Saba, and Toosii, plus a stunning, genre-busting collaboration with New Zealand band Unknown Mortal Orchestra.

Throughout Limbo, Aminé plays with themes of responsibility and purpose. The death of Kobe Bryant forced him to reckon with his fading childhood. He thinks a lot about legacy for an artist who’s only 26, and takes pride in personally touching everything tied to his image, from music videos to merch. Each album Aminé releases is like a puzzle piece, slowly revealing a portrait of the artist, and as the picture becomes more clear, it only becomes more intriguing.

Document spoke to Aminé about Limbo and its deluxe, his Portland-inspired style, and his dog, Oliver. 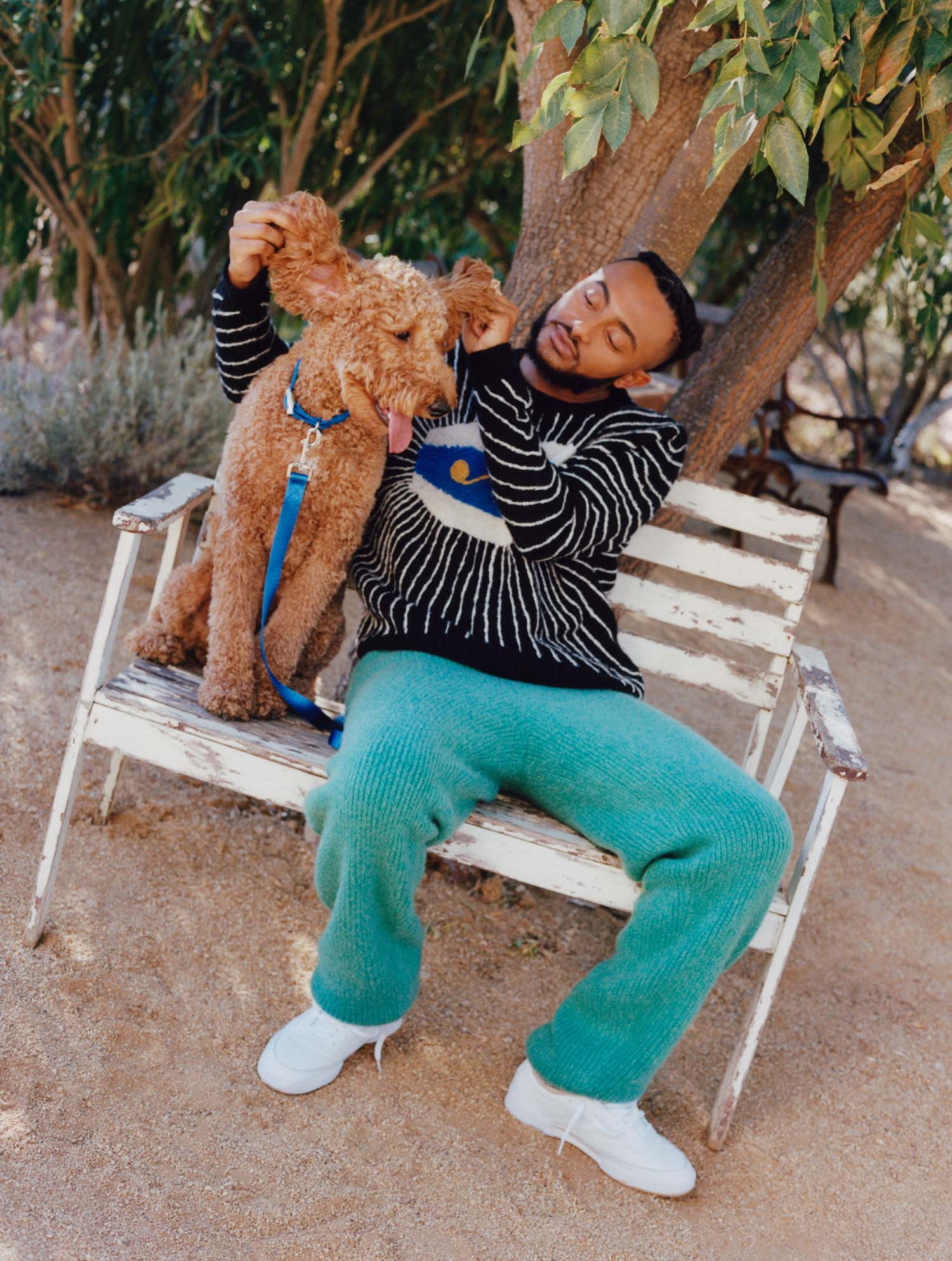 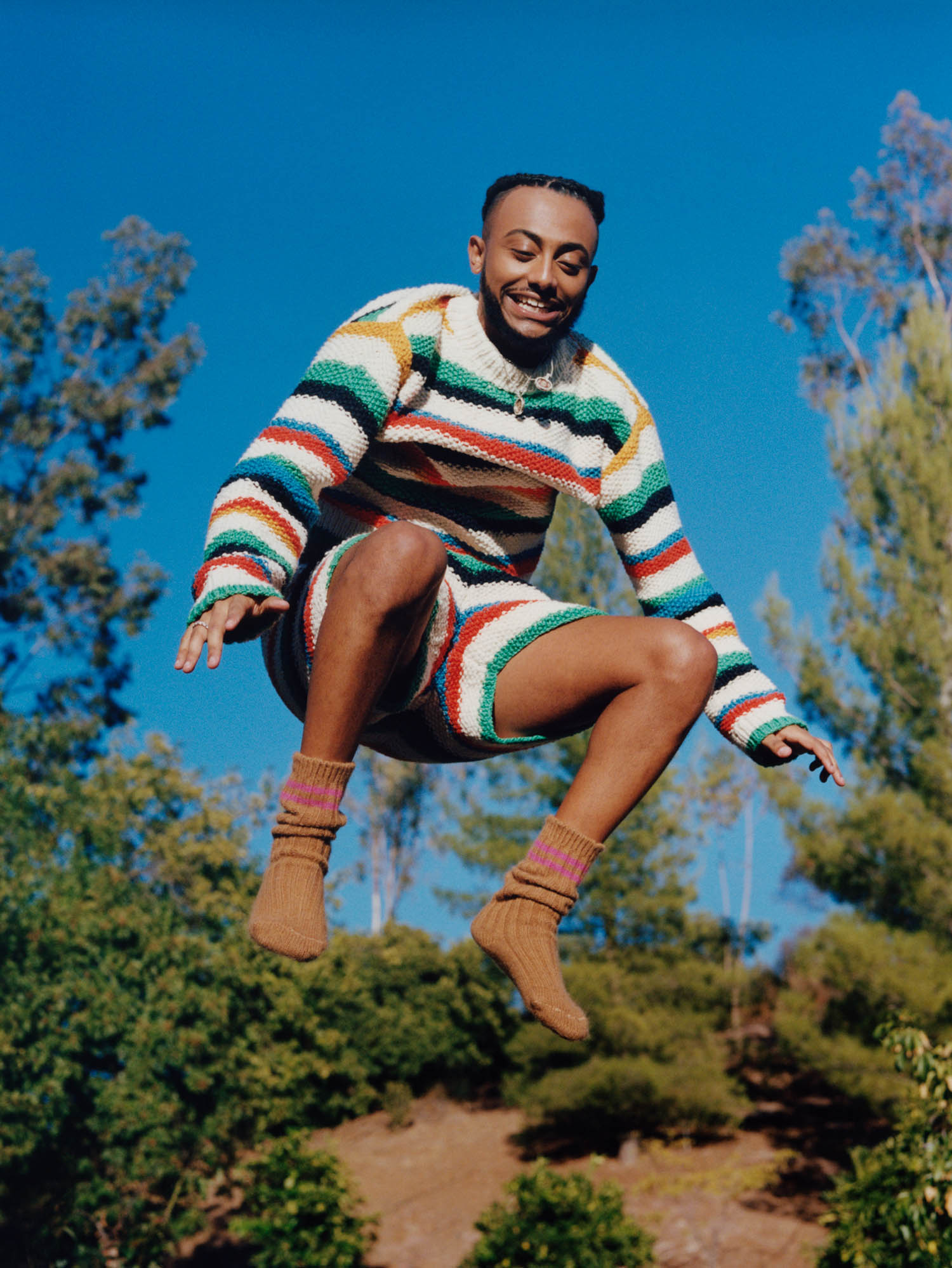 David Aaron Brake: Something that strikes me is how long it took you to record this album. Why did you feel the need to take so much time between releases?

Aminé: I felt like I had never done that before. I wanted to challenge myself and be more cutthroat about my song selection for an album. Before, I would usually make an album within a span of six to seven months, knock it out. OnePointFive was done in, like, one or two months. I made OnePointFive to give me more time on this. I just felt it was necessary.

David: Are the deluxe tracks also from the same recording sessions over the past two years?

Aminé: Yeah, I mean most of them were songs that I really wanted on Limbo, but I took them off because they didn’t make sense for sequencing. So, these songs are kind of my last hoorah—here goes the songs from this era one more time for you guys before we move on to the next.

David: I imagine that part of the challenge of taking so much time for one album is that your sounds and ideas change throughout the process. Did you have to go back and adjust while you were making Limbo? Would you go back a few months later and reconsider song selections?

Aminé: Yeah. There was a certain point in time where I didn’t have the name for the album, and I wanted it to be a very indie, punk project that I’d mix with rap. I switched that idea a year later, you know what I mean? Ideas always change, and I feel like it really takes time to understand exactly what you want to do. You don’t just wake up one day, like, ‘Yeah, this is exactly what it is and I’m gonna take two years to make it.’ Ideas form and morph into different things over time. 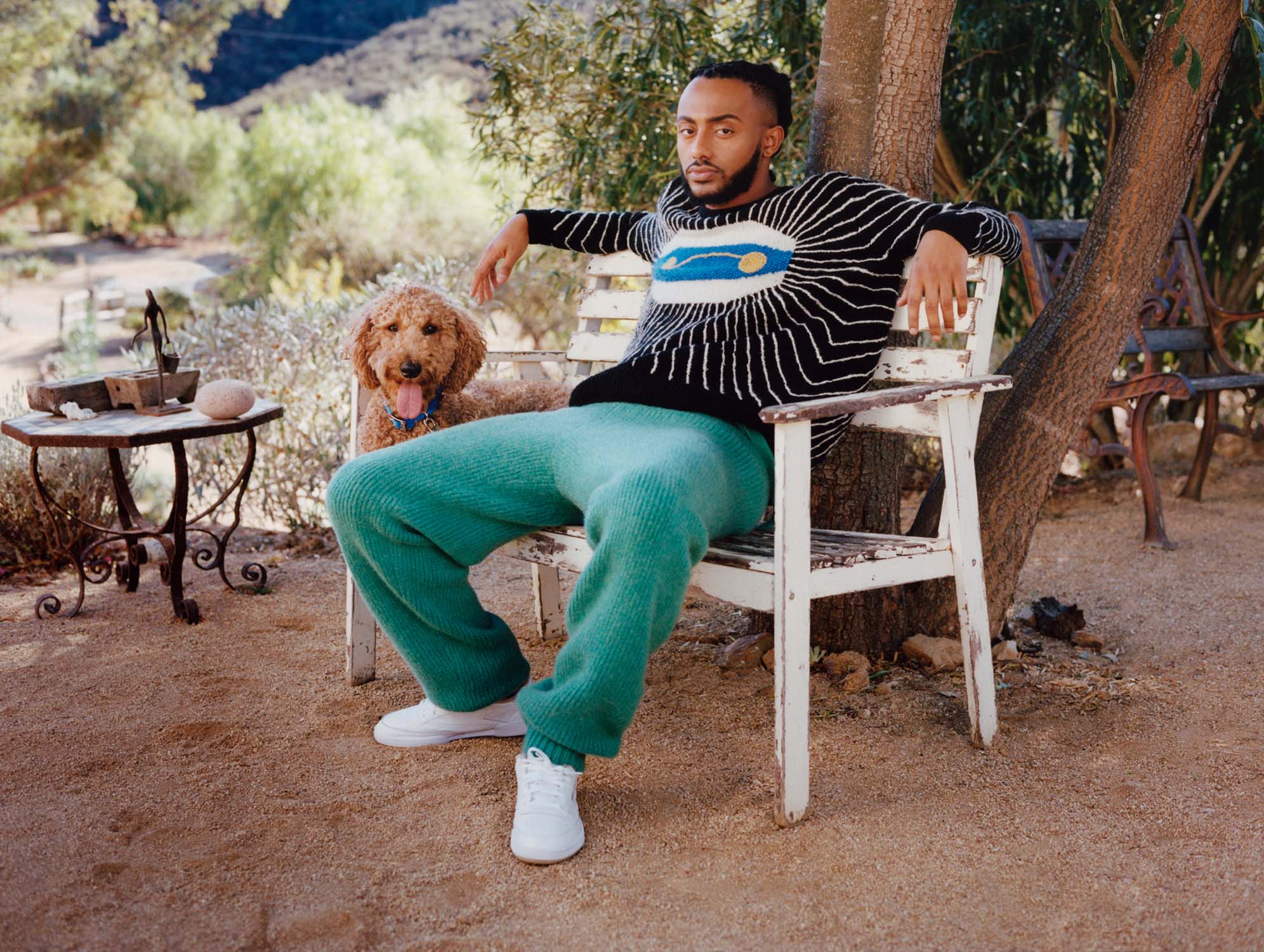 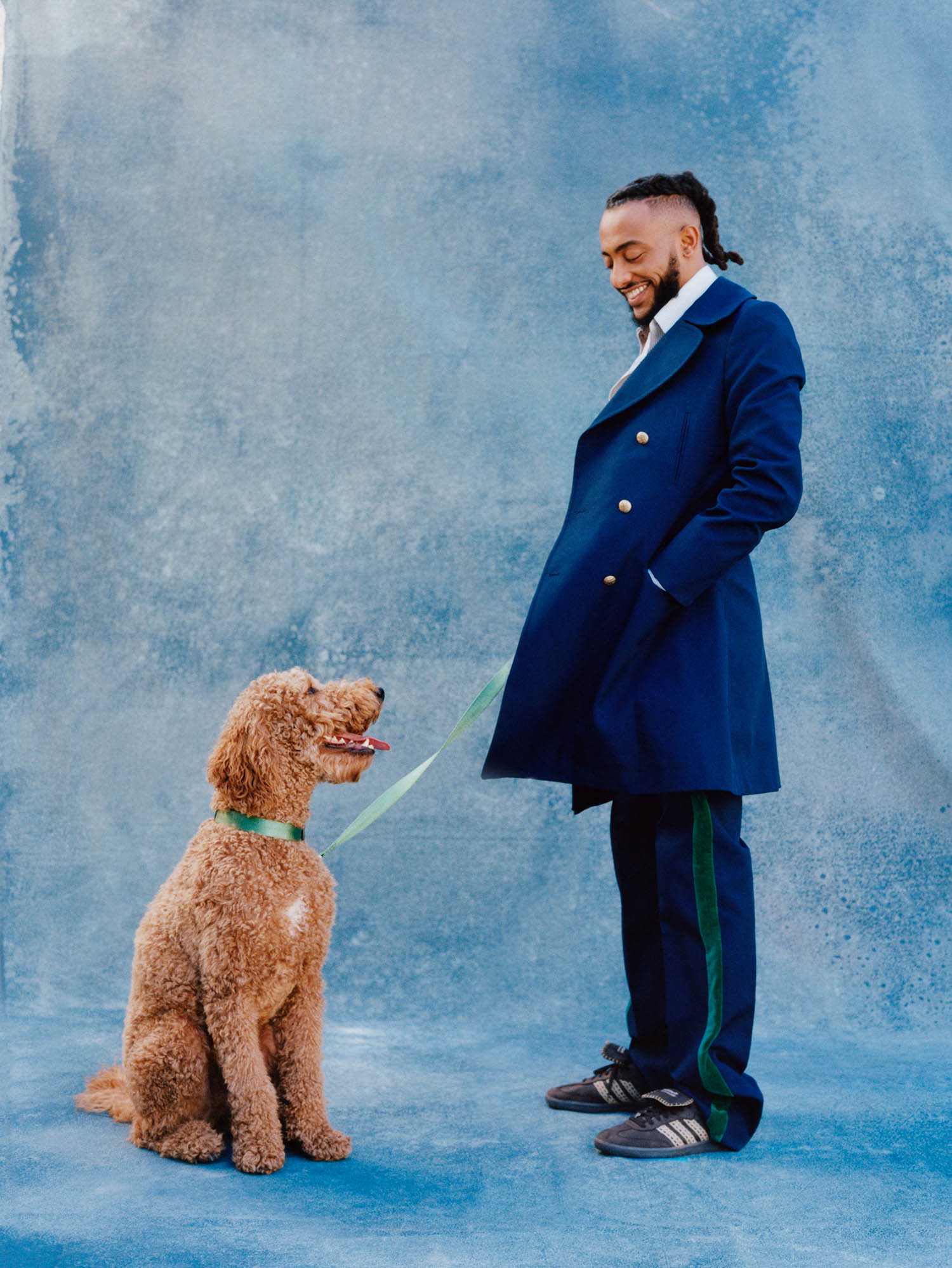 David: What was your biggest challenge while making Limbo?

Aminé: My biggest challenge was making an album for two years and then having a pandemic hit as soon as [I started] to release it. That was a bit discouraging for me. I know the whole world is going through it, my family is too, but to work on something for two years and realize, ‘Shit, we don’t know when the world is going to be back to normal, [but] this music is important to us and we want it out in the world, so we’re going to put it out.’ The most difficult thing for me is after you put out an album. Fuck awards, fuck everything else—the most rewarding thing is going on tour and seeing fans scream every word back at you. It lets you know that you made music that really touched people. To not see the fans I see every year on tour, it hurts. There’s one girl I see at the front of the line at every show in Detroit, and this year I won’t get to see her. People like that are the people that motivate me to make better music.

David: Speaking more about fans—something that I picked up on is your frustration with the ‘casual listener.’ It’s a frustration I share, too.

Aminé: Our attention spans these days have gotten shorter and shorter, and there are more musicians than ever now. There are some who do it for making music and some who just do it because it’s so easy to do it. They know they can make a one minute song, get a bunch of streams, call it a day, and make some money. That’s never been my motivator for doing what I do. When I first started doing music, I never thought I could actually make money from it, I just did it because it really made me happy and it was something that saved my life. I know the casual listener does not care about my story or [music] saving my life. They just want to hear a song to party to. And that’s fine, I have those songs [too]. But the kids that come to the show and buy out the tours and buy the merch, and listen to me and want to listen to every word I have to say, those are the people I really do it for. Those are the people I know who are going to stick with me through the thick and the thin.

“Fuck awards, fuck everything else—the most rewarding thing is going on tour and seeing fans scream every word back at you.”

David: You’re very involved in every aspect of your career. What’s your process when you approach, for example, creating a music video?

Aminé: I just want to make sure it’s always the best it can be. Whether it’s the merch, the shows, or the music videos, I’m just kind of an asshole when it comes to that shit. The person that we hire for lighting on a tour, nine times out of ten, doesn’t really care, they’re just doing their job for a check. So, I’m gonna be on their ass. They don’t understand what I’ve invested into this emotionally. I just really, really care about everything I do. I don’t care about what the outcome is right now, but I know what it will mean ten years from now. [My] legacy is super important to me.

David: I would love to speak some about your dog, Oliver. When and where did you get him and what type of dog is he?

Aminé: I got him at this farm. The owners were breeders and they were breeding Goldendoodles—he’s a miniature Goldendoodle. I don’t want to give them a shout-out because they were really weird [laughs]. It seemed sketchy, and I really just wanted to save Oliver from that situation. He’s my partner in crime right now. He’s gotten me through quarantine in a very special way. I got him a few months before quarantine, I always wanted to have my own dog [because] I’ve had my own place now for years. I felt lonely so I wanted something that would support my emotional state.

David: I love your muted, techwear-inspired outfits. Do they come from being raised in Portland?

Aminé: First of all, thank you, and yes, definitely. Where I’m from, people wear very nice coats—Arc’teryx, North Face, all this good wear that of course looks really cool, but what’s more important is the tech of it, how it fits you, and how it actually works. I’ve always been a person that chooses comfort over the way something looks. I’ve never been the guy to wear a shirt with a bunch of holes in it because it looks cool.

Aminé: I just bought this Human Made x CPFM [Cactus Plant Flea Market] cardigan. It looks like the Grinch green color—like, this bright Limbo green—so I’m really happy for that to get home so I can wear it. And JJJJound just did a collaboration with Eddie Bauer on these vests that I really love. They made Eddie Bauer cool, which is sick because Eddie Bauer is super functional and actually comfortable for dads. I guess I just dress like a dad. 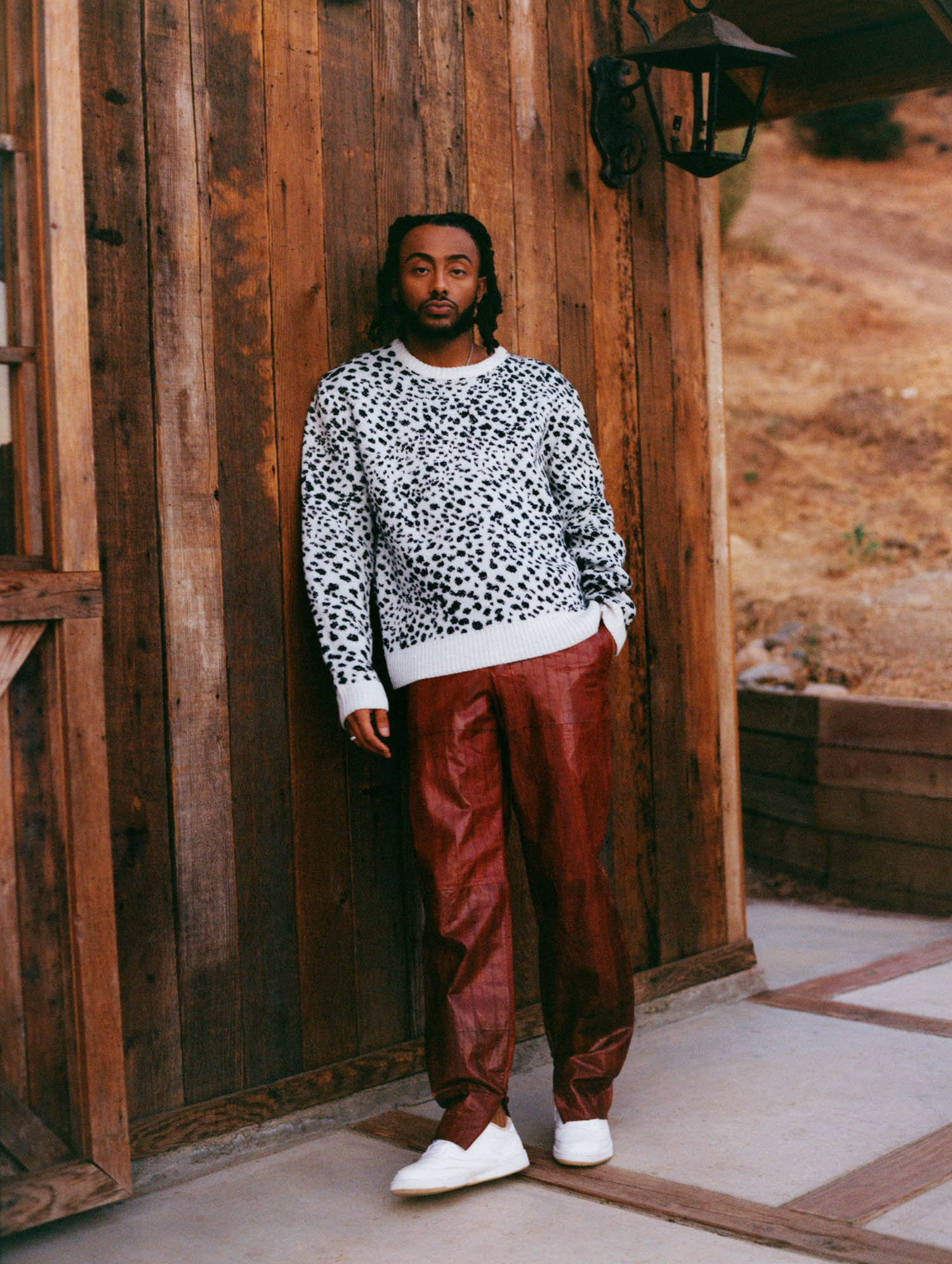 David: You also designed your own Portland Trail Blazers jersey. What was that like?

Aminé: That was really, really fun. I wanted to make sure that we did it to perfection. Designing an NBA jersey is really controversial for stans of that team. So if the design is super different from what they’re used to, they’re gonna hate it. I’m really confident in what we made, just ‘cause it seems like the city loves it. The jersey embodies growing up in Portland. It kinda has a 2000s-style design to it.

David: Portland has been in the news endlessly in recent months. We seem to overlook Oregon’s racist history and push this narrative that Portland is a liberal safe haven. Could you tell me about that history?

Aminé: Yeah man, it’s racist [laughs]. It’s just like California, which is painted as this very liberal state, but then you go outside of LA or San Francisco, to Huntington Beach or other places, and they’re super red, super racist. The rest of Oregon is 99.9% white, and if you’re going to find any Black people, it’s going to be in Portland. I’ve always had a love-hate relationship with the city. I was born and bred here, and this is my home, but growing up here I was never welcomed enough to feel like it’s my home.

David: A feature I loved on Limbo was Unknown Mortal Orchestra. It was unorthodox but worked exceptionally well. How did that come together?

Aminé: We worked together on that close to two years ago. We were in a cabin in Portland and we were working on that song. Ruban from UMO helped develop some ideas for me early on. I met him first in New Zealand in 2018. I was a huge fan of his Sex & Food album and that’s how I got introduced to him. I wanted to meet with him, so he met us for sushi in New Zealand. He was super nice and a year later we started working together on music in Portland because he lives in Portland with his family. It was perfect.