“We are in a state of digital warfare”: how new activists are harnessing the power of social media for good.

The warriors are coming.

This month, a new generation of American activists emerged, many of them born in this century. While they fight for the same rights and freedoms as their predecessors, they are digital natives harnessing the awesome power of social media to organize their followers and spread their messages. New York City’s Warriors in the Garden have surfaced at the forefront of youth-led Civil Rights protests. The group is a multi-generational collective comprising artists, models, and students all sharing a similar goal. Warriors’ demands are not incongruous with Civil Rights activists two generations ago—policy that aids low-income minority communities and consciousness-raising among allies—but their tactics are markedly different; their on-the-ground operation and branding resembles that of a modern-day digital media company.

In the past few years we’ve witnessed something we’ve never seen before: activists who come of age in real time. We see their organizing ability (and its missteps) via social media. We can watch their rallies live in-person or we can livestream them on the go. Long gone are the days of back-room meetings or organizers piling into college campus dorm rooms. No more dorm rooms. Just DMs. 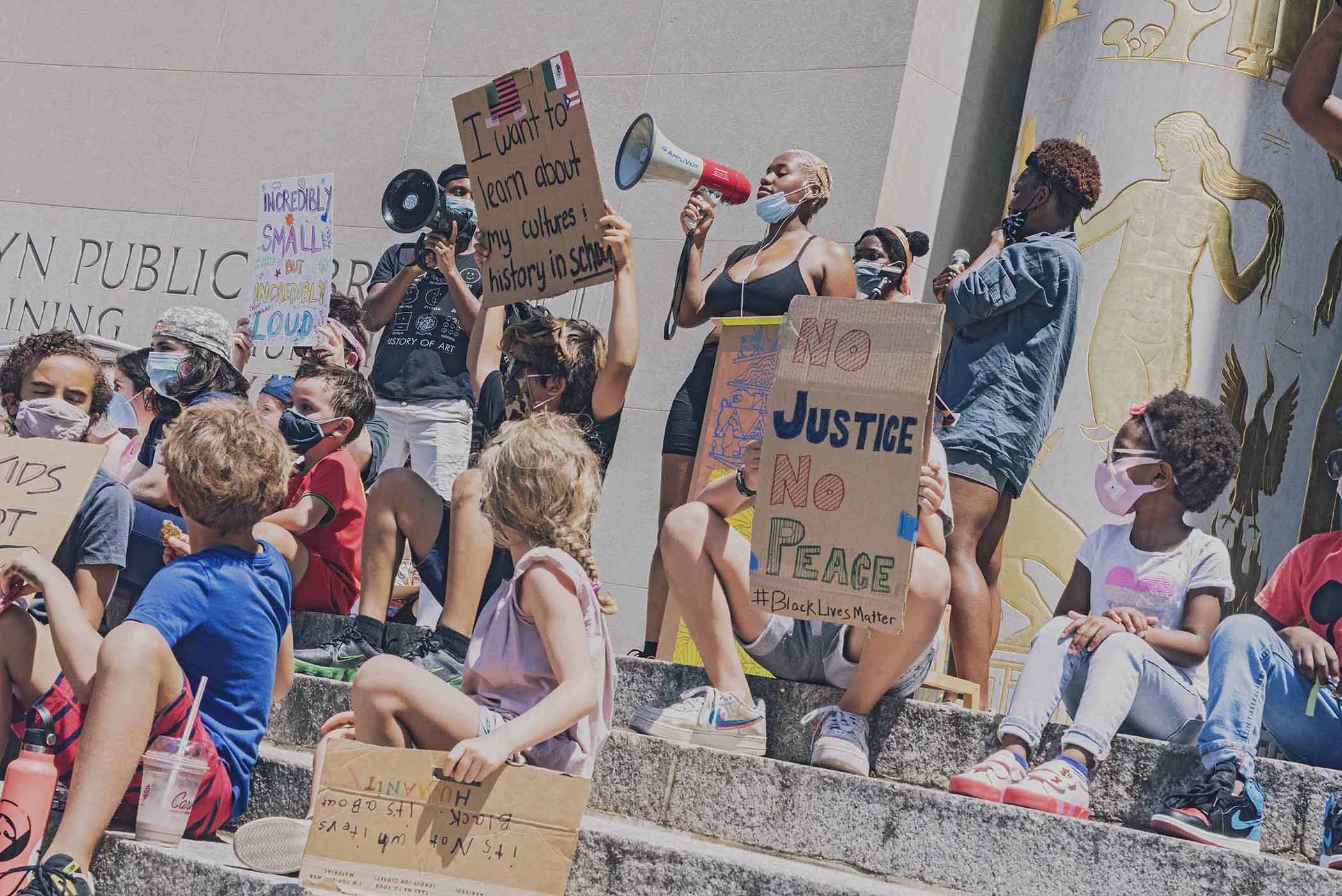 Warriors of the Garden hosted a children’s march in Brooklyn.

Remarkably, the Warriors in the Garden founders had never once met each other before two weeks ago. Now they draw hundreds and sometimes thousands at their protests. As of today, they’ve amassed over 14,000 followers on Instagram, and raised nearly $30,000. They were even featured in the New York Times.

Warriors in the Garden has 14 original co-founders, but the membership is growing as the demand and responsibility increases. Each member plays a specific role within Warriors, tied to their own personal set of skills.

“Before two weeks ago, I didn’t even do activism. I do not even consider myself an activist. I just say that I’m black and tired.”

“Before two weeks ago, I didn’t even do activism. I do not even consider myself an activist. I just say that I’m black and tired. I’m not an activist.” says Olivia Rose Johnson, a co-founder. Johnson, 20, attended her first protest in New York City three weeks ago, where her friend was arrested.

“I just thought ‘Oh shit. So any of us can just get arrested? This shit is real as fuck.’” At the next protest she attended, she was surprised by the numbers the crowd drew but realized no one was taking initiative—so she grabbed the megaphone and explained the necessity of the movement to the large crowd of protesters. It was then she saw the need for leadership and thought she could harness the power of social media and creativity as an organizing tool. Several protest-goers exchanged contact info, and Warriors in the Garden was born. 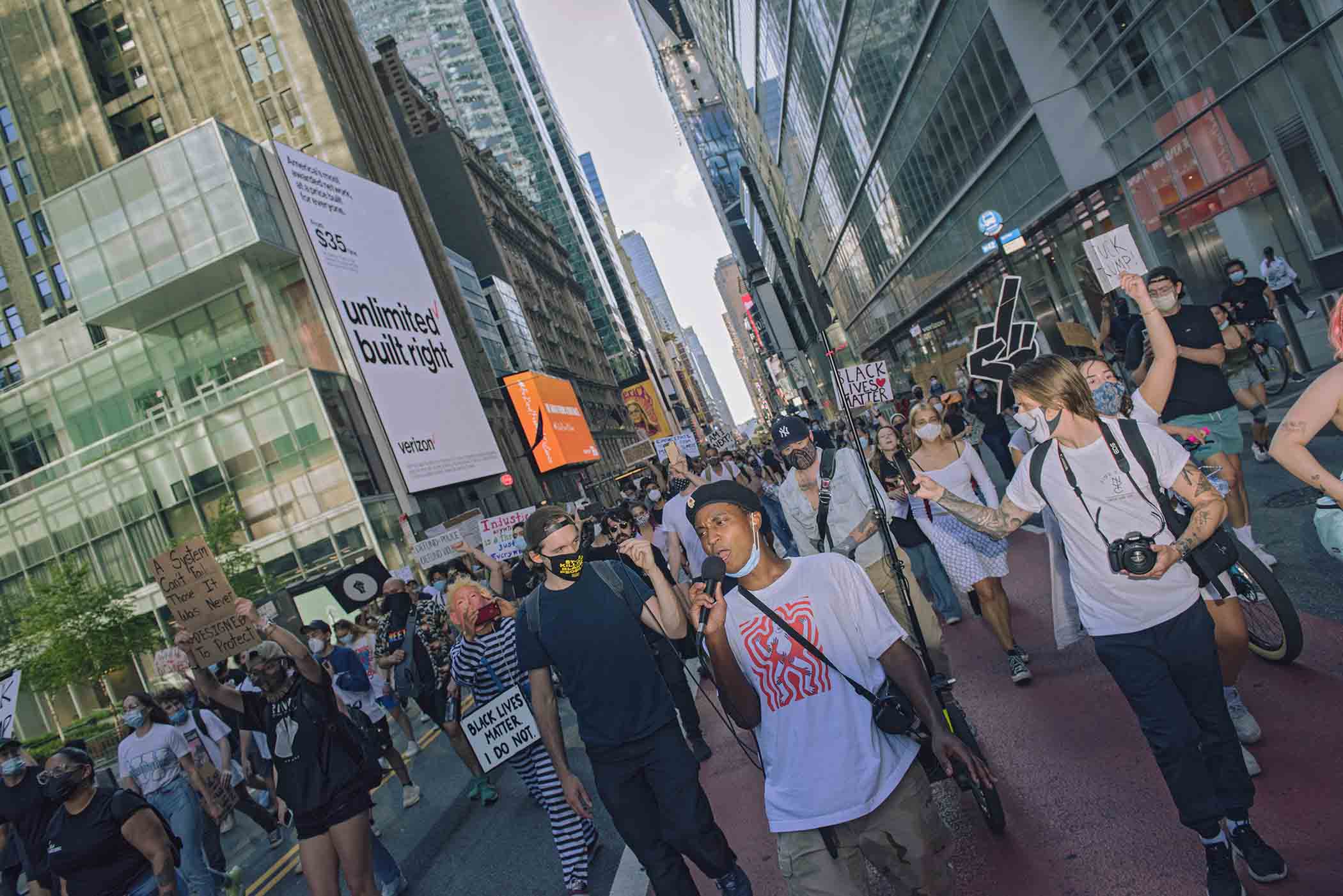 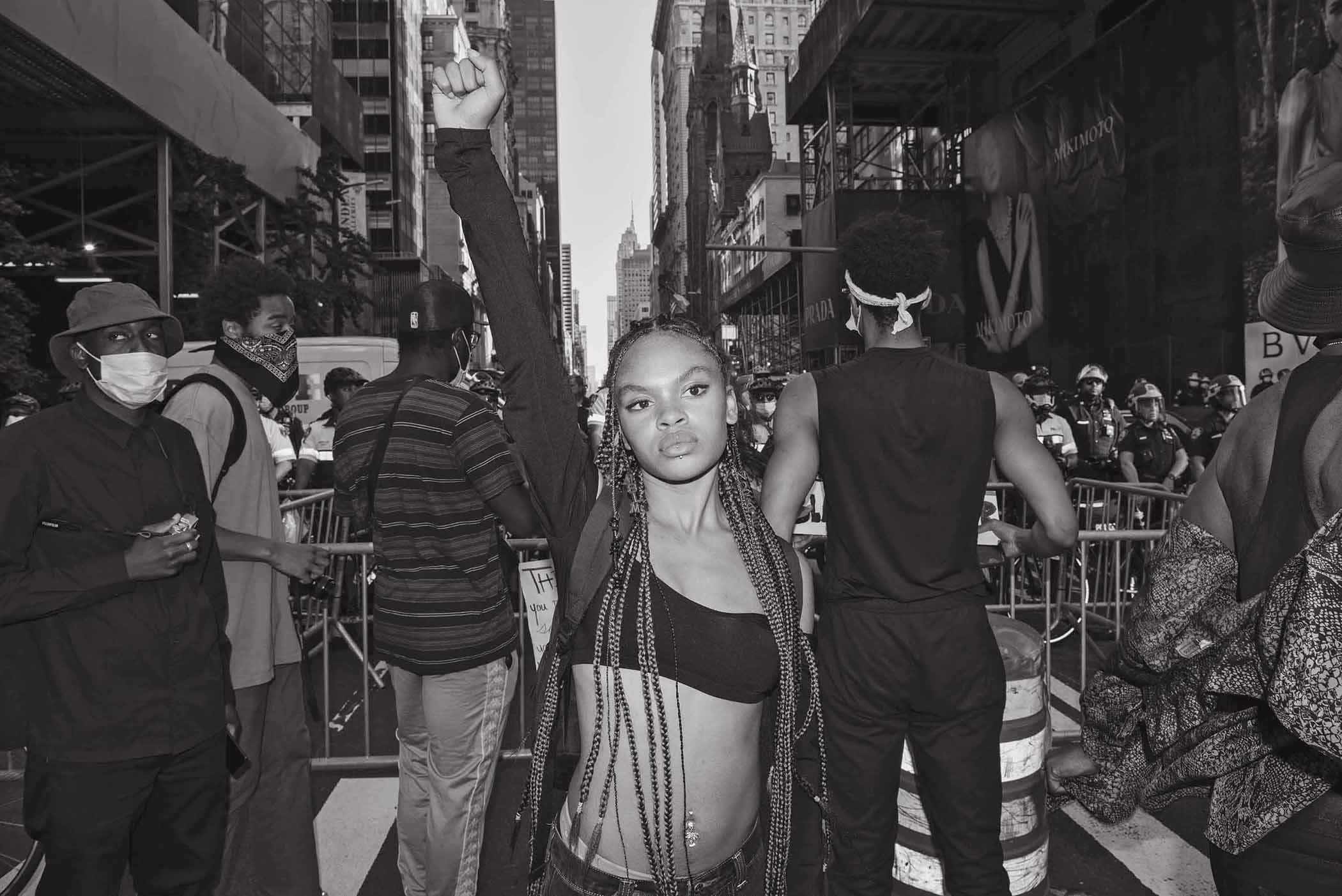 L: Chi Ossé leads a march through midtown. R: Olivia Rose Johnson turns her back to police while holding up a fist for black power.

Johnson is a neuro-marketing major, with a big smile and long, lithe braids that end at her hips. She has over 34,000 followers on Instagram, and last year she featured in campaigns for Nike and Milk Makeup. “Oh, we have mutuals,” she says, as she pores over my Instagram profile.

“We have a good team of people. None of us knew each other before these protests, we just realized we have the loudest voice at the protests and knew that we had to hone in on that noise and make it come from one source,” says Chi Ossé, another co-founder, 22, from Brooklyn.

Derek Ingram, 28, works in the marketing arm of a development group. In the borrowed language of the professional class, Ingram is the Warriors’ “communications director.” A self-described “military kid” and son of immigrants, Ingram spearheads the outreach efforts.

“Our younger members are tapped into social media. It’s just all hands on deck. We have social media campaigns planned out for the next three months,” Ingram says. “In terms of being innovative, we know that in the ’60s and ’70s there were more sit-ins and boycotting and we’ve been coming up with ways to supersede that and get the attention of companies in a digital way.” 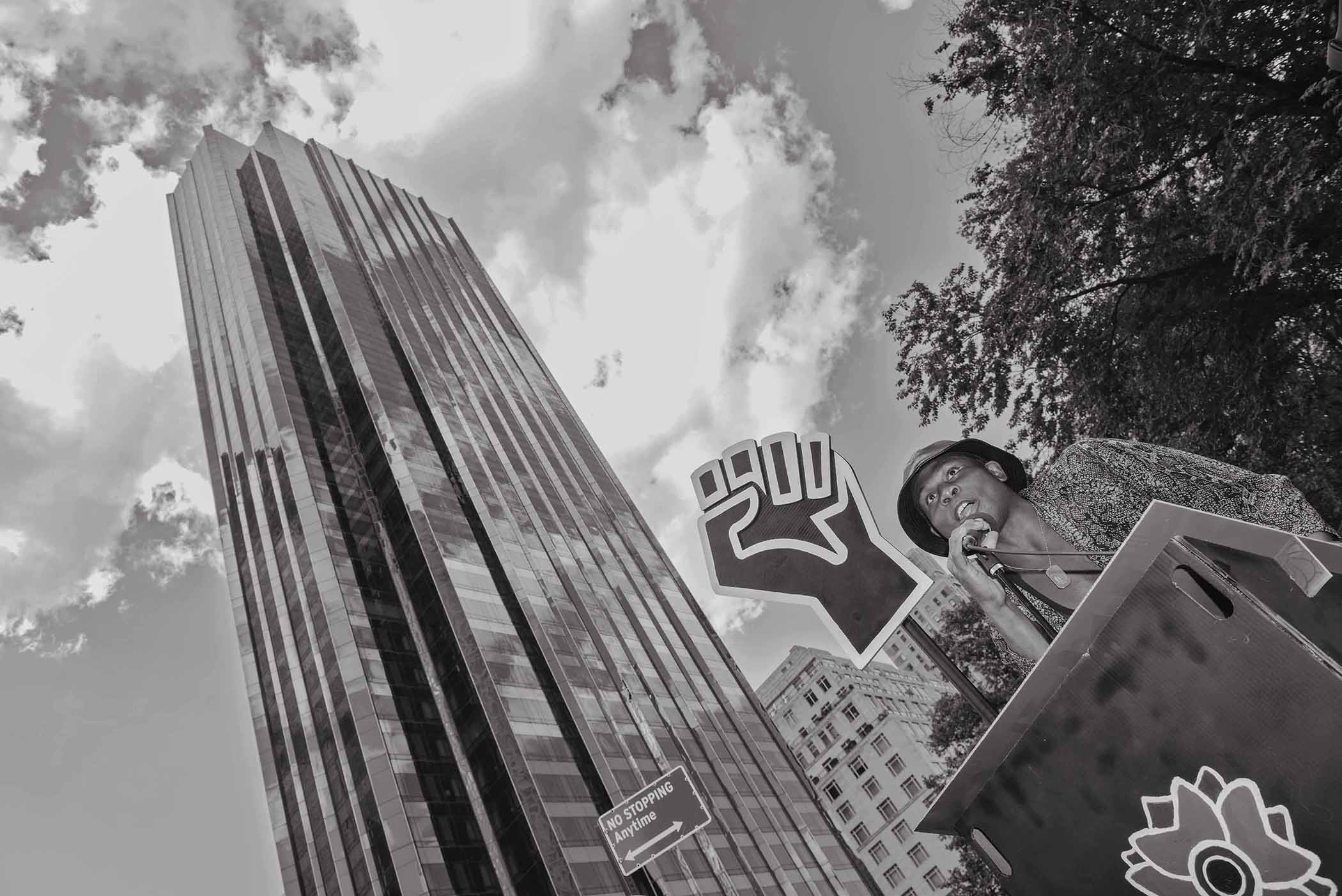 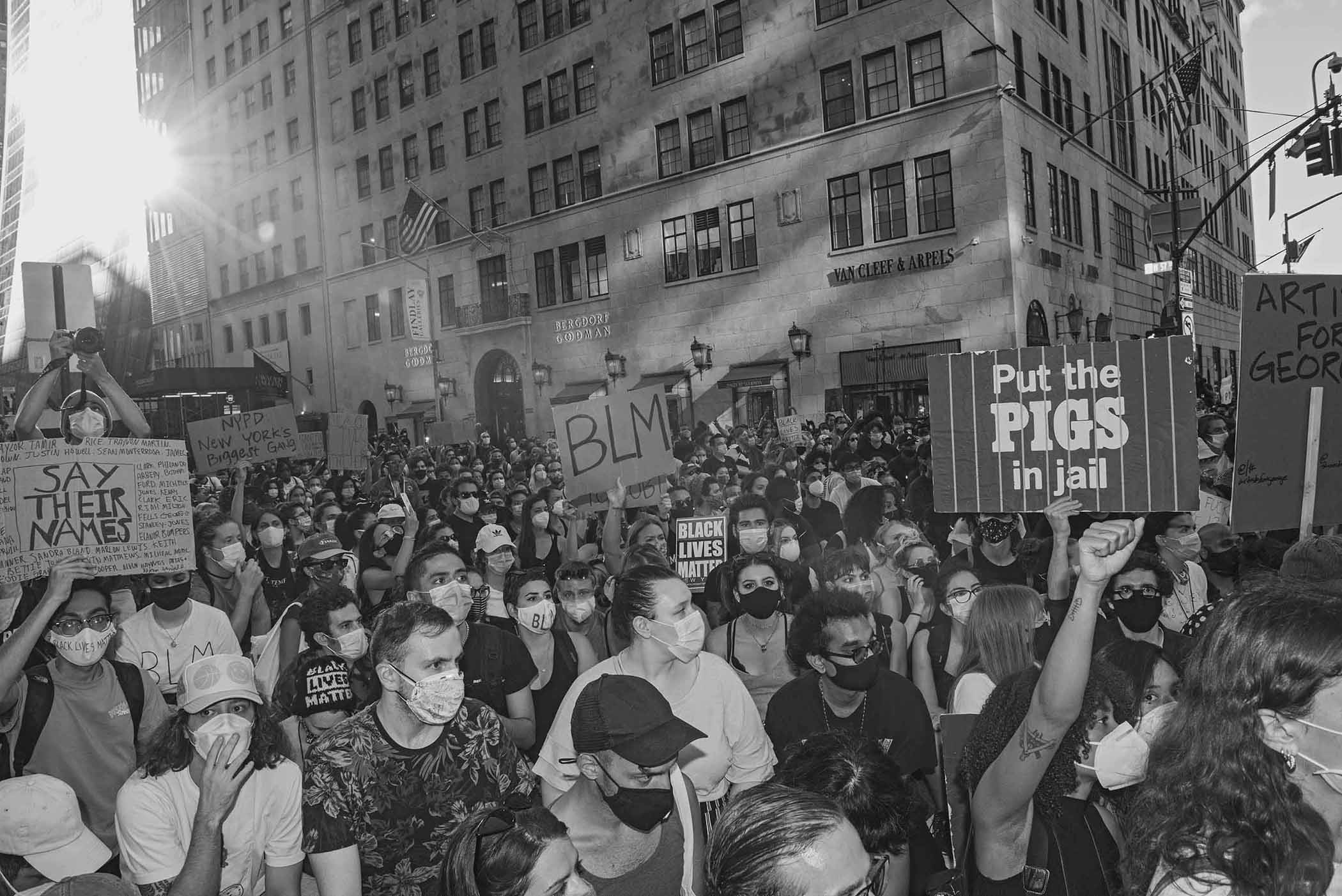 L: Derek Ingram addresses a crowd outside of Trump Tower in Manhattan. R: Protesters hear Warriors of the Garden speak during a protest march in Manhattan.

Borrowing from the playbook of big brands and corporate strategy, Warriors in the Garden is engaged in a well-coordinated influencer marketing campaign. “Influencers are something that has propelled us. Our smallest influencer has 100k, then we have Sasha Velour, who has 1.7 million followers, and other models. Our biggest influencer has 5.7 million followers; she retweets us and endorses us, and we’re doing a live on her feed, and it’s all free,” Ingram says.

“We are fighting this war on many fronts…we are in a state of digital warfare.”

“We are fighting this war on many fronts,” Ossé says. But when I ask him about social media’s role in growing Warriors’ following and spreading their messages to reach thousands, Ossé says it is invaluable. “We are in a state of digital warfare.”

As new movements and groups sprout up in the digital sphere, leadership becomes amorphous and so do ideologies and lists of demands. Warriors in the Garden have taken a pragmatic approach—organizing in high foot traffic New York City areas and drawing hundreds (sometimes thousands of protesters) to create visibility, while working to draw up a series of legislative proposals—an effort to exert force outside of the system while working within it with the aim of incremental but tangible results. 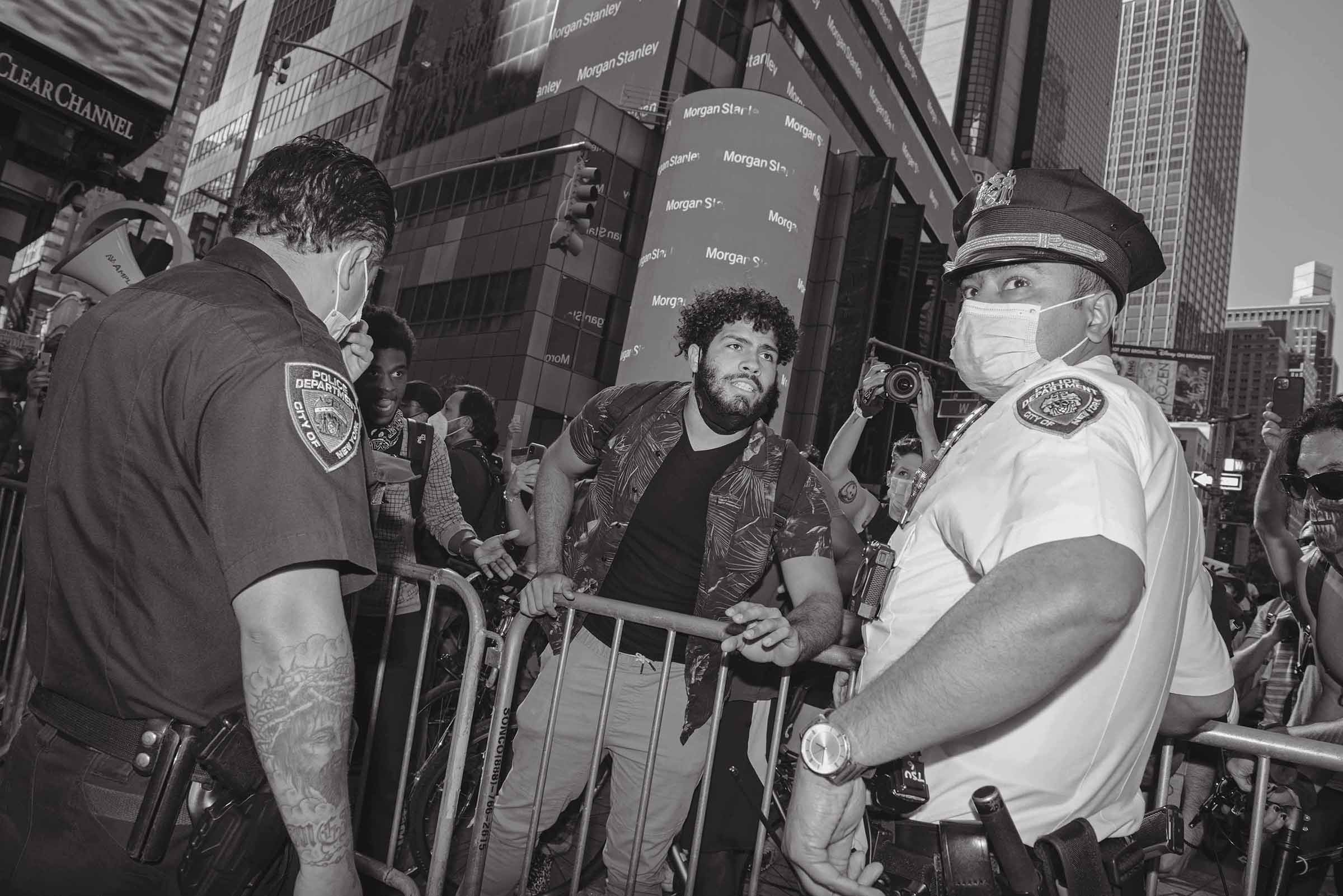 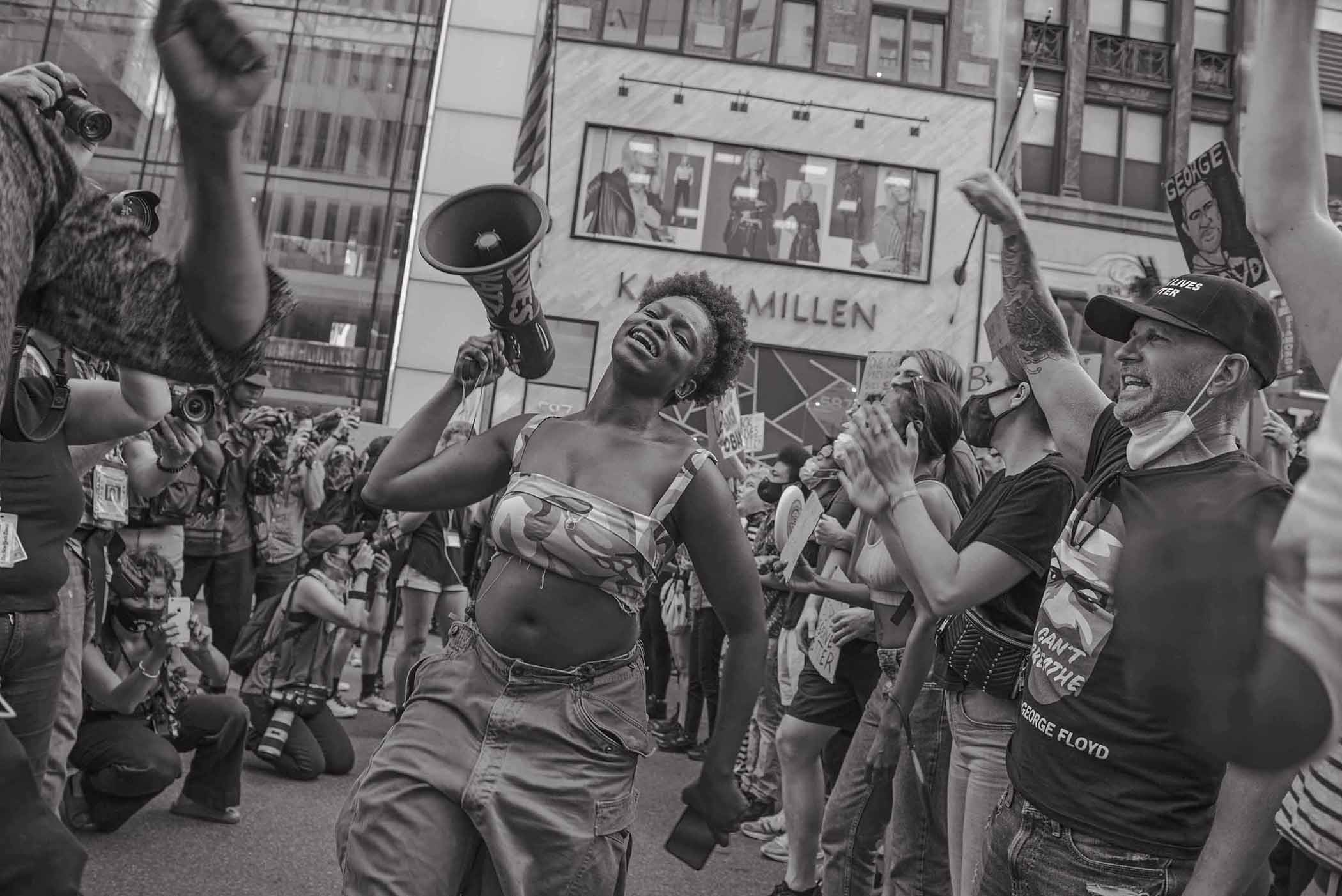 L: Warriors’ co-founder, Joseph Martinez, negotiates with police to allow a peaceful protest through Times Square. R: Kiara Williams leads a crowd of protesters during a march through Manhattan.

“We’re trying to defund the police,” Ossé says. We’re trying to repeal 50-A. We’re working with a legislator to reallocate those funds after defunding the NYPD. We definitely want them to go into the communities that the NYPD has affected for decades. Going into mental health, health in general, after school, education programs, public transportation. We need to re-allocate these funds. But right now we’re focused on repealing 50-A. The New York primaries are coming up; at many of our protests we hand out ballots—voter registration.” (50-A was a New York law that has long shielded police officers’ individual records from freedom of information law requests—the New York Legislature passed a law to repeal 50-A protections since this interview.)

While legislative change is regarded as essential to the Warriors in the Garden, their movement is also about shifting cultural attitudes; they pull audience members from the crowd to reflect on their own experiences.

On Thursday, a drenched crowd of a few hundred protesters listened to Cindy Kamtchoum, a young African American woman, who implored the white crowd for an enduring fight beyond the protests. Under the pouring rain, with the Washington Square Arch as the backdrop, Kamtchoum told demonstrators: “This fight never ends for me. You think when I get home after protesting that this fight is over? I do the same things you do. I watch Netflix. Except when I watch Netflix, I think ‘Wow, I wish there were more people who look like me on the screen.’” 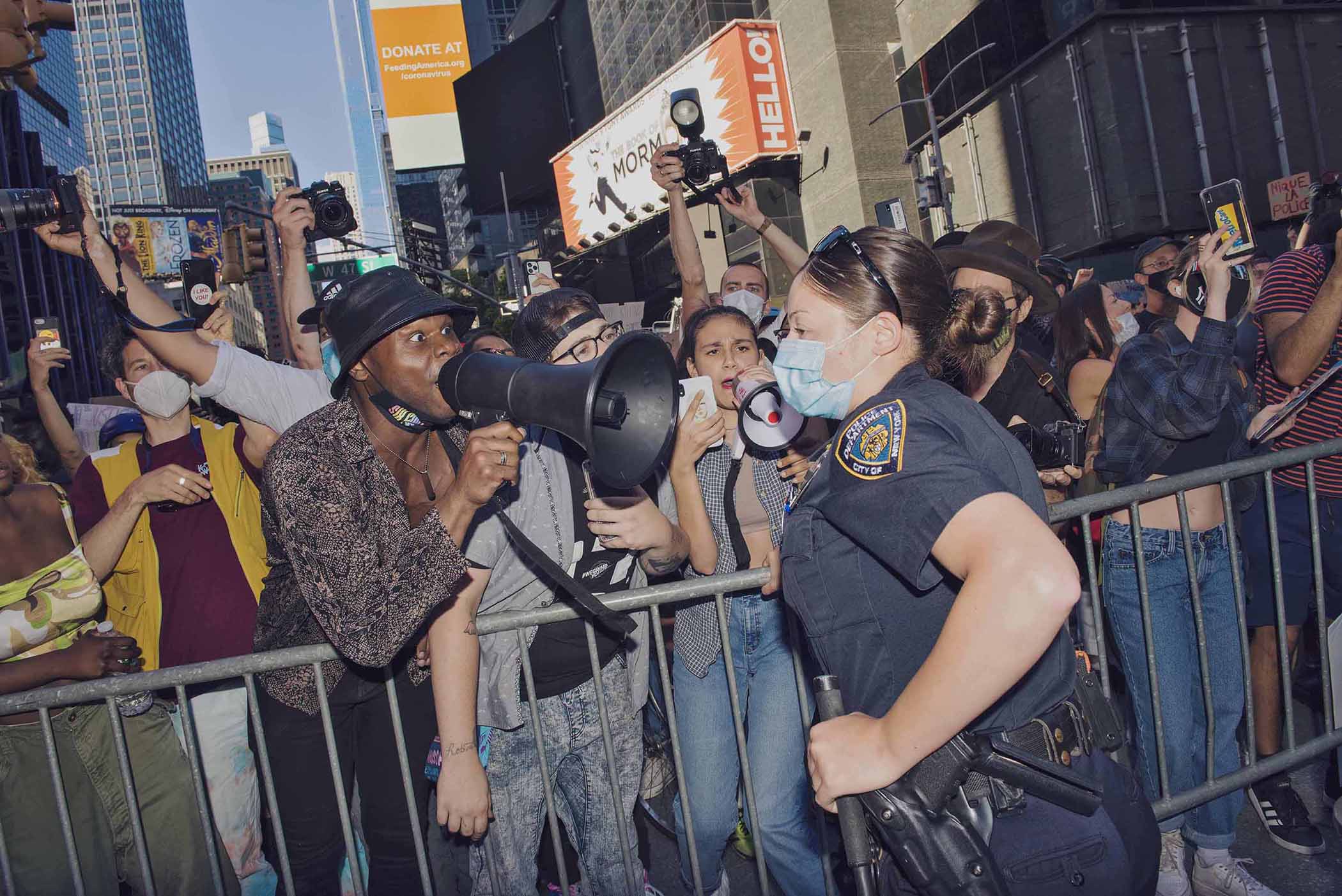 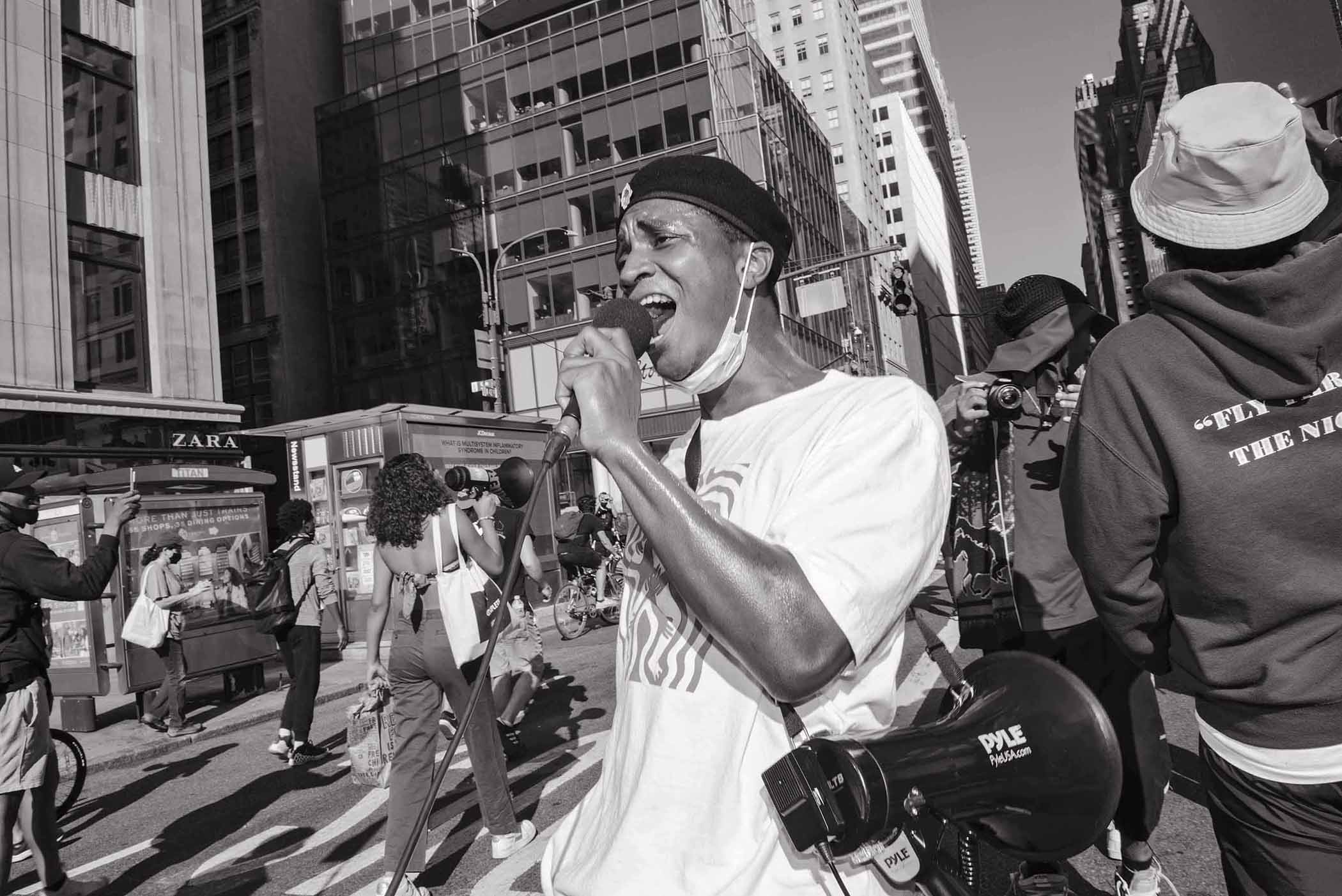 Last Wednesday, Warriors in the Garden hosted a protest for children. The children and their parents (mostly white families) marched from Barclays Center to the Brooklyn Public Library. In an attempt to resonate with the elementary school age crowd gathered outside of Barclay’s Center, a speaker tried to analogize lunch money-stealing schoolyard bullies to police officers. They brought markers for children to draw protest signs. They borrowed an ice cream cart.

Even with all their newly-gained media attention and leadership role within the New York activist communities, the Warriors’ inexperience is sometimes present. Two organizers with megaphones struggled to think of protest chants during the short children’s march to the Brooklyn Public Library. (“It’s hard not to think of any chants without profanity,” one organizer said.)

When they arrived at the Brooklyn Public Library, the Warriors in the Garden organizers brought a sound system and invited the young children to talk about their hopes and dreams, asking each child what he or she would like to be when they grow up. When the megaphone arrived in the hands of one young boy (no older than seven), he stood up with great sincerity and declared, “I want to be a police officer when I grow up and ride on a police motorcycle!” The Warriors shot each other awkward glances and mordant laughs reverberated throughout the crowd of parents. 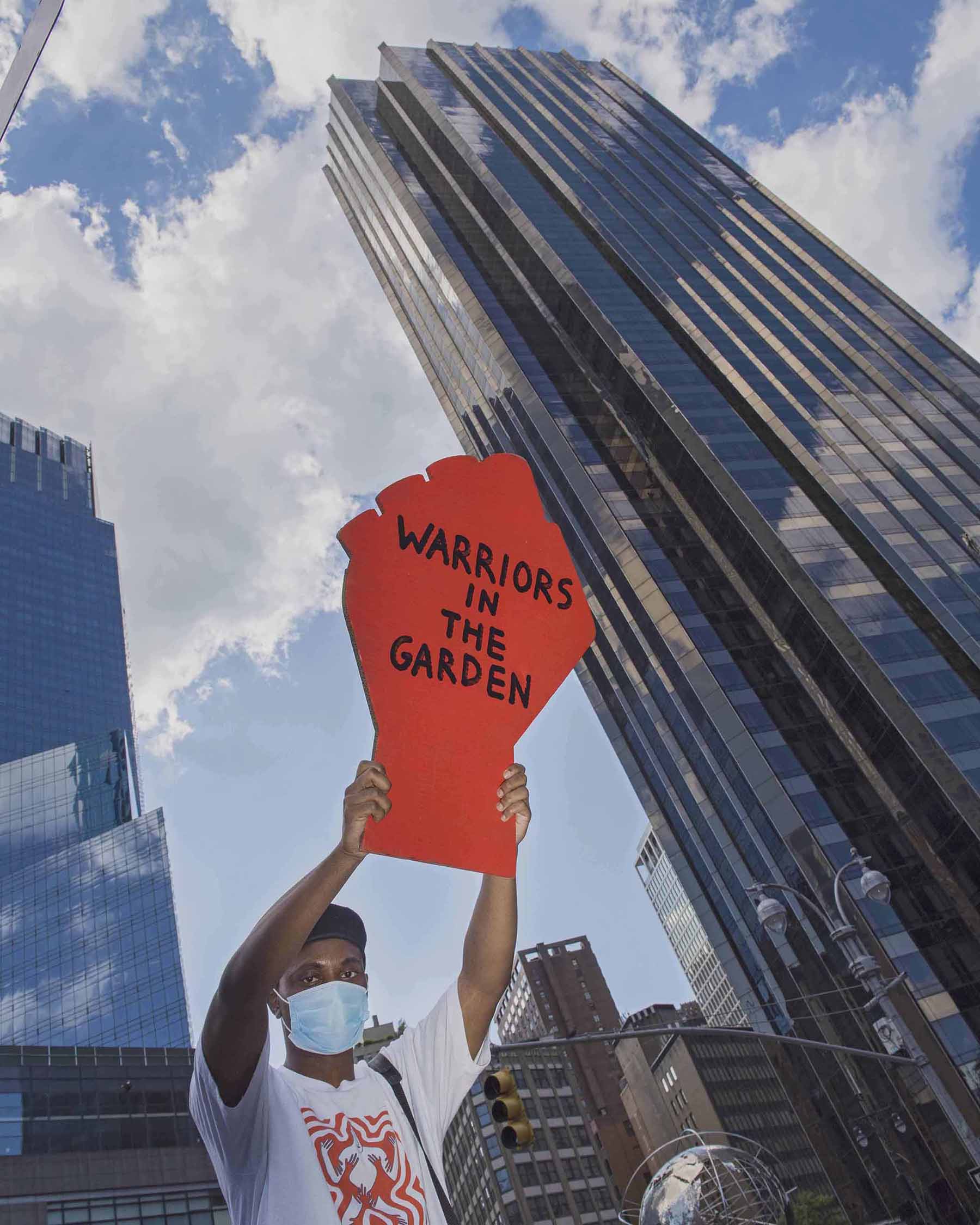 Chi Ossé outside of Trump Tower before a protest march in Manhattan.

As the rally began to fizzle out, Olivia Johnson explained the meaning of the name Warriors in the Garden. “New York City is our garden,” she said. “It must be protected.”

“Everyone is focused on police brutality. But our overall goal is to disassemble systemic racism in the lower-income and African American communities. So we started making a media company. We’re protesting but we also have to nourish the community while we’re doing it.”

Just as we were wrapping up our conversation, a young child and her father (both white) came by to thank Johnson for organizing the protest.

“This is her second protest and we were looking for something a little more kid-friendly,” he said.

When I asked him how they heard about the protest, he cocked his eye and raised a brow.

View Slideshow
Tags
NYCProtestsWarriors in the Garden
Tweet this quote