Photographer Jamel Shabazz recreates the iconic image of 177 artists including the Wu-Tang Clan and The Roots.

September 29, 1998 is a day that Kasseem “Swizz Beatz” Dean will never forget. The music producer was just 18, working on DMX’s first album at Powerhouse Studios in Yonkers, New York. “I just remember everybody rushing out of the studio, all of the artists rushing, talking about “We’re going to Harlem to take this photo with this famous photographer,” and I’m on my drum machine,” remembered the musician at the Gordon Parks Foundation Gala in New York on June 4. Swizz Beatz decided to skip the photoshoot and work. “It’s one of the things that I regret, to this day, not meeting Mr. Gordon Parks the Great.”

Here’s a little background information on that photo and the famous photographer who took it: On August 12, 1958, photographer Art Kane captured 57 jazz musicians, including Thelonius
Monk, Dizzy Gillespie, Count Bassie, and Mary Lou Williams. The photo, taken for Esquire magazine, would go down in history as “A Great Day in Harlem.” Forty years later, in 1998, Sheena Lester, the editor-in-chief of XXL magazine had the idea to recreate “A Great Day in Harlem,” with hip-hop artists—the new generation of storytellers of the black narrative. Michael A. Gonzales, a music writer, knew just the right photographer to take the photo: the legendary Gordon Parks, who moved effortlessly between fashion photography and reportage. He was as equally adept at taking poignant images of the Civil Rights Movement as he was glamorous film stars. It took some work, but after Parks declined twice, Lester finally convinced him “I told him, not only do we want you to take this picture, we believe that no one else should take the picture,” she recounted to Gonzales in a 2014 article for Red Bull Music Academy Daily. That photo, featuring 177 hip-hop artists including The Roots, the Hieroglyphics, Slick Rick, Wu-Tang Clan, and Black Star, would become known as “A Great Day in Hip Hop.”

To mark the 20th anniversary of “A Great Day in Hip Hop,” the Gordon Parks Foundation restaged the late photographer’s image at its annual gala, tapping photographer Jamel Shabazz to recreate the iconic image.

September 29, 1998 was indeed a great day in hip hop. “Everything about that day was so memorable. For starters, Brand Nubian just reunited, and released their fourth album, Foundation,” recalled Ahmir ”Questlove” Thompson of The Roots. “Mos Def and Talib Kweli released their debut album We Are Black Star. Little did we know at the time A Tribe Called Quest was serving us their swan song, The Love Movement. Outkast releases their Aquemini album, which was like my favorite in their collection…Not to mention, Shawn ‘Jay-Z’ Carter releases the album that will play amongst the Mount Rushmore of greats with A Hardknock Life Volume 2. That comes out that day as well.”

Questlove remembers that day clearly. The Roots had spent the previous five years touring, mostly abroad, so the band didn’t have many chances to meet their fellow hip-hop artists. “For like the first time, five years into our career, they’re like, ‘Meet Rakim, meet Wu-Tang, meet Jermaine Dupri’—all these greats, Kool Herc and the Cold Crush Brothers, like we’re meeting them all for the first time,” recalled Questlove. “That was a really, really special day for us and to see him [Parks] there in the eye of the storm, just cool, calm, and collected and not panicking. Such an innocent moment was something to behold; it was so surreal and beautiful that I’m really proud to be part of this photo.”

Questlove’s Roots bandmate, Tariq “Black Thought” Trotter recounted trying to quietly leave the photoshoot before Rakim stopped him. “He was just as excited to meet me as I was to meet him,” he remembered. “It was definitely a watershed moment for me, and I went back up to the top of the stoop, and I sort of took my place.”

Black Thought explained to the audience why Shabazz was the right man to shoot the image’s third iteration. “When I look at a Shabazz image, it transcends the senses. I’m able to hear, to smell, to taste New York,” he said. “I can feel the texture of the leather bombers and sheepskin coats. I hear the base from the boomboxes and the jingling of gold chains and door knocker earrings. I feel the hum of dapper Dan’s sewing machine. And I’m immediately transported to the most important era of my life, my youth, which parallels the youth, the formative stages of this thing of ours.”

Approximately 20 of the musicians—including Questlove, Black Thought, Slick Rick, Kool Keith, and Fab 5 Freddy from the original photo were at the gala, and one by one, an announcer called them to the stage. “What I want to do now with this photograph, I want to create something iconic and special,” said Shabazz, explaining that he wanted to take two different shots. “So in this photograph, tighten up a little bit brace each other and show some love,” he instructed the group. For the second one, he called out for “anyone else has contributed hip hop to the stage here. Swizz and Alicia Keys, I need you to take the stage so we can make this complete.”

Swizz Beatz, who with Keys, owns the biggest private collection of Gordon Parks photos including “A Great Day in Hip Hop,” may not have been in the original photo, but he took his place in the restaging.

“This is for the history books here,” said Shabazz as he snapped away on his camera. 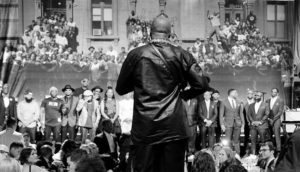