“This is for black lives, for justice”: A month ago they were strangers. Last weekend they led a rally of 10,000 cyclists across Manhattan

Today, as in recent months, the billboards in Times Square glow eerily over the nearly empty streets below as many New Yorkers, or more accurately, tourists remain sheltered indoors. This past Saturday however, an estimated 10,000 protestors flooded Times Square on two wheels in support of Street Riders NYC’s bike rally. As cyclists poured onto Seventh Avenue, Peter Kerre, one of Street Riders’ seven co-founders, issued a gentle reminder to the anxious crowd, “Remember [this is] a protest. So please channel that energy—this is for Black lives, for justice. It’s against police violence. We’re here for a reason. It’s not to celebrate, it is to protest.” Still, the energy amongst the crowd was palpable. In that moment, despite the towering walls of commercial eye candy, it was the message on the ground that reverberated the loudest. The message: we’re here to create change.

In recent weeks dozens of new, young, and Black-led civil rights groups have materialized across New York City to organize protests, demand reform, and champion racial justice. Within this activist community, there’s one group you’re most likely to see whipping around the city at any given moment: Street Riders NYC. 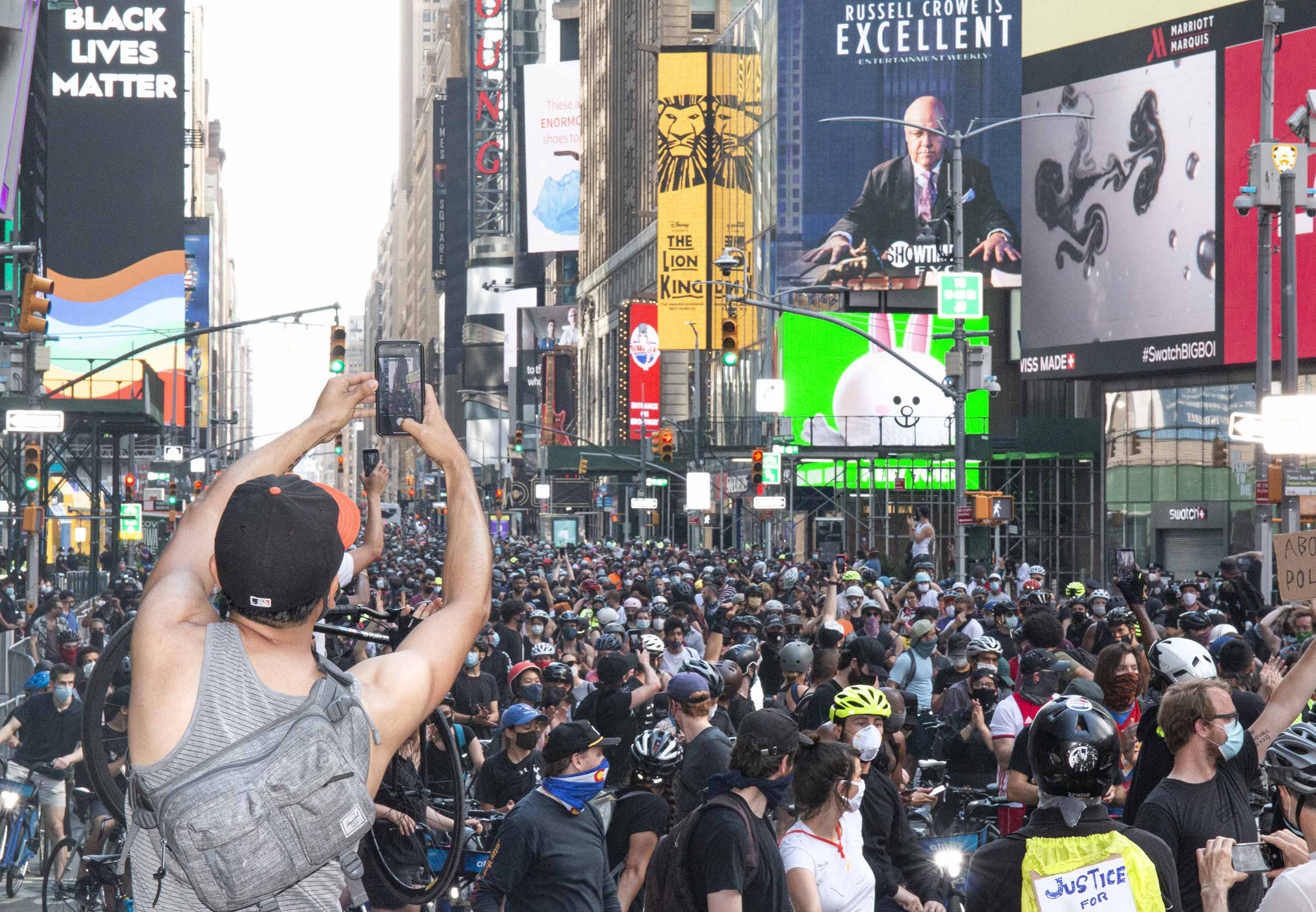 The crowd in Times Square prepares to ride out.

Like their marching counterparts, Street Riders NYC maintain a commitment to fighting the good fight. It is a fight they’ve taken up on two wheels rather than two feet. Led by Orlando Hamilton, 28, the crew is a multi-racial team comprising seven riders—six cyclists and one (badass) e-scooterer. The team’s operational model is twofold: to organize and lead bike protests (such as Saturday’s ride) and to act as a protective support service for walking protestors.

Given the scale of Street Riders NYC operation, it’s hard to believe none of the riders knew each other before the group’s formation. As Hamilton tells me, “we all formed and met at the first protests [for George Floyd],” where they repeatedly ran into one another on their bikes. Quickly, they established a natural bond over their collective interests in cycling and activism.

It was at these protests that Hamilton first identified a pragmatic means of intersecting everyone’s shared interests that would eventually lead to the group’s foundation. “I noticed there were a lot of people that were on bikes that were just walking in the crowd. There would be bikes riding in the front, but it would be for just a cool factor,” recounts Hamilton. “It really bothered me because I noticed the bike could be used as a tool. I came up with the idea to put the bikes together to create a barrier between the police and the walkers. Everything kind of just grew from there, and before you knew it people were calling us or hitting us up in the DM, like ‘hey are you guys going to be coming to our protest to help us out? If not, can you do that?’ And then we were just like, all right, let’s make it our own group.”

When they’re not leading their own bike rallies, Street Riders NYC continue to offer their supportive services. Whether all together, or as individuals, the team regularly gets to as many as three or four different protests in a single day, but they can’t be everywhere. To meet the surging demand for their presence, Street Riders posted a volunteer form on their website. Within days, hundreds of people signed up to help out. 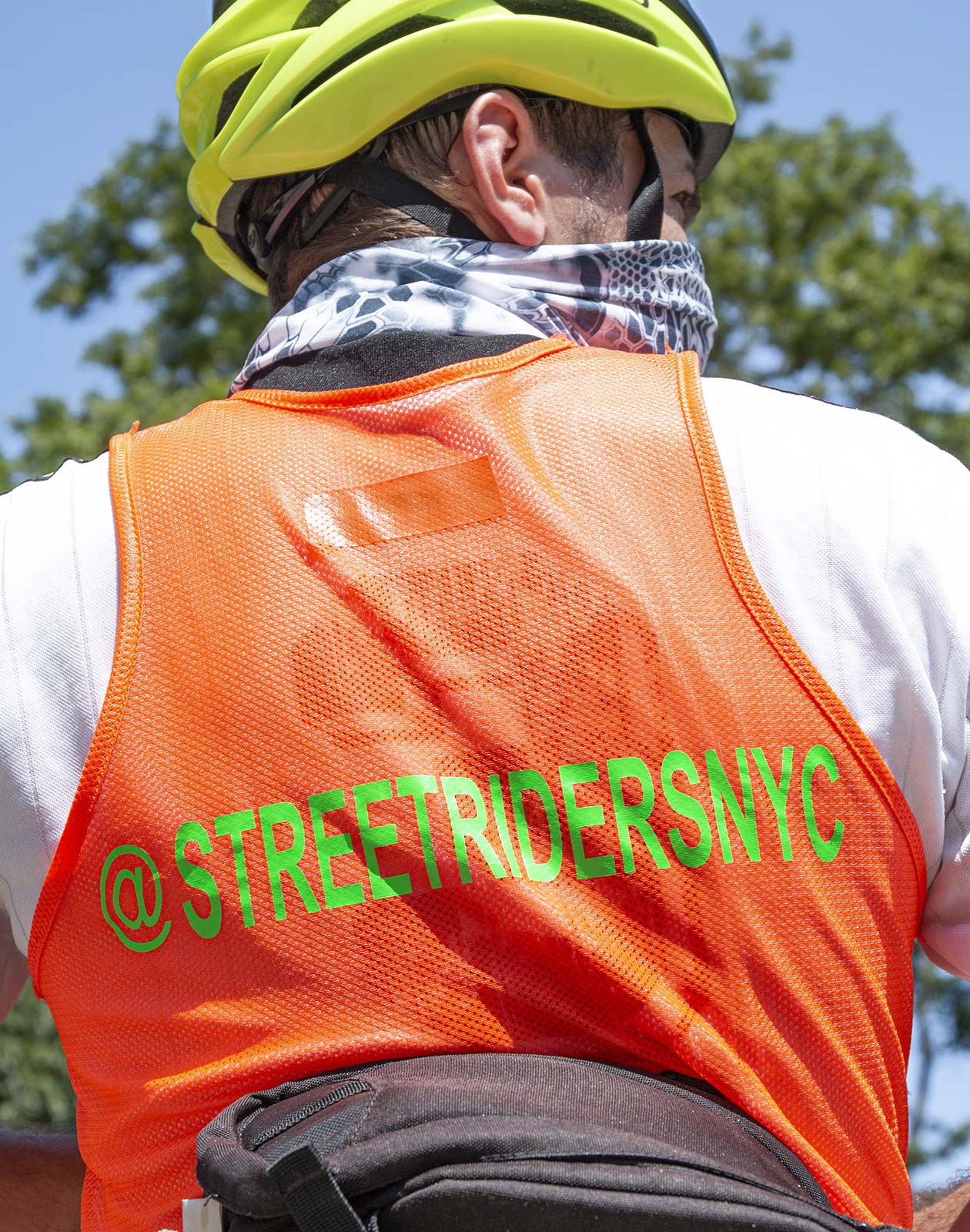 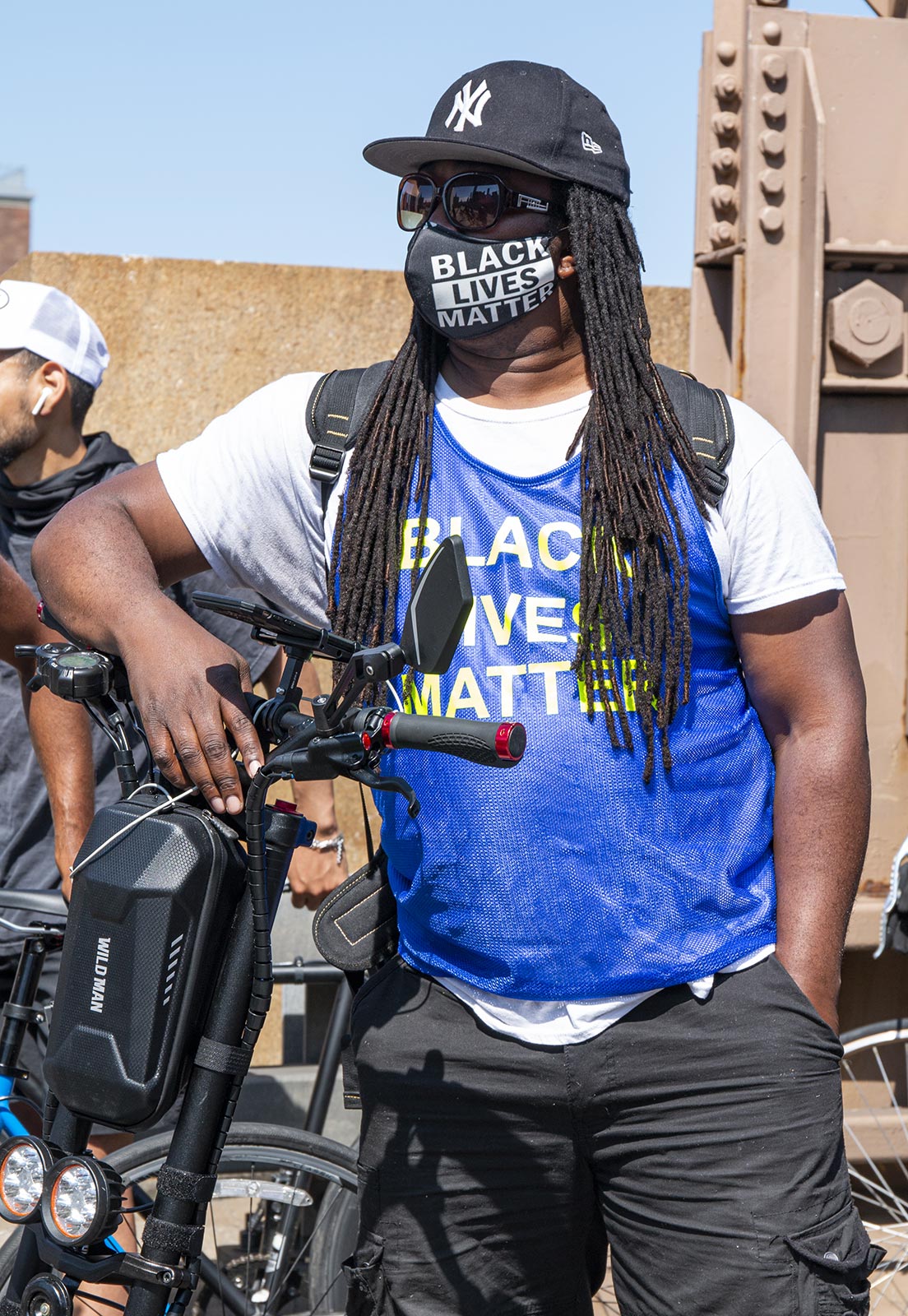 Whether it’s on the ground or online, Street Riders NYC—like their marching peers Warriors in the Garden—regularly draw in hundreds or even thousands of people despite being strangers a mere three weeks ago. To Kerre, the team’s ability to attract such numbers is a testament to the authenticity of their bond, and by extension the bond of those around them. “We’re from worlds where people would probably never even meet. For us to meet and have this solid bond, and then have this bond bring out 10,000 people—it’s organic, it’s real.”

Building community is a central focus of Street Riders’ activism. At the beginning and end of every Street Riders rally is a call to know your neighbor. “I encourage that at every single bike protest,” says Hamilton. “If you don’t know the person next to you, know them. Through that, we’ve created a certain bond that you can’t compare to any other protest.”

In a very pragmatic sense, facilitating communication builds a network of trust among the riders. This, in turn, bolsters the safety of the entire protest. “When we’re taking a bridge,” says Antonio Garcia, 24, “how are you going to trust that you’re going to make it through if you don’t know who’s standing right next to you? Get to know the person that is next to you. You will actually feel more comfortable in trusting yourself and trusting your safety in their hands.” 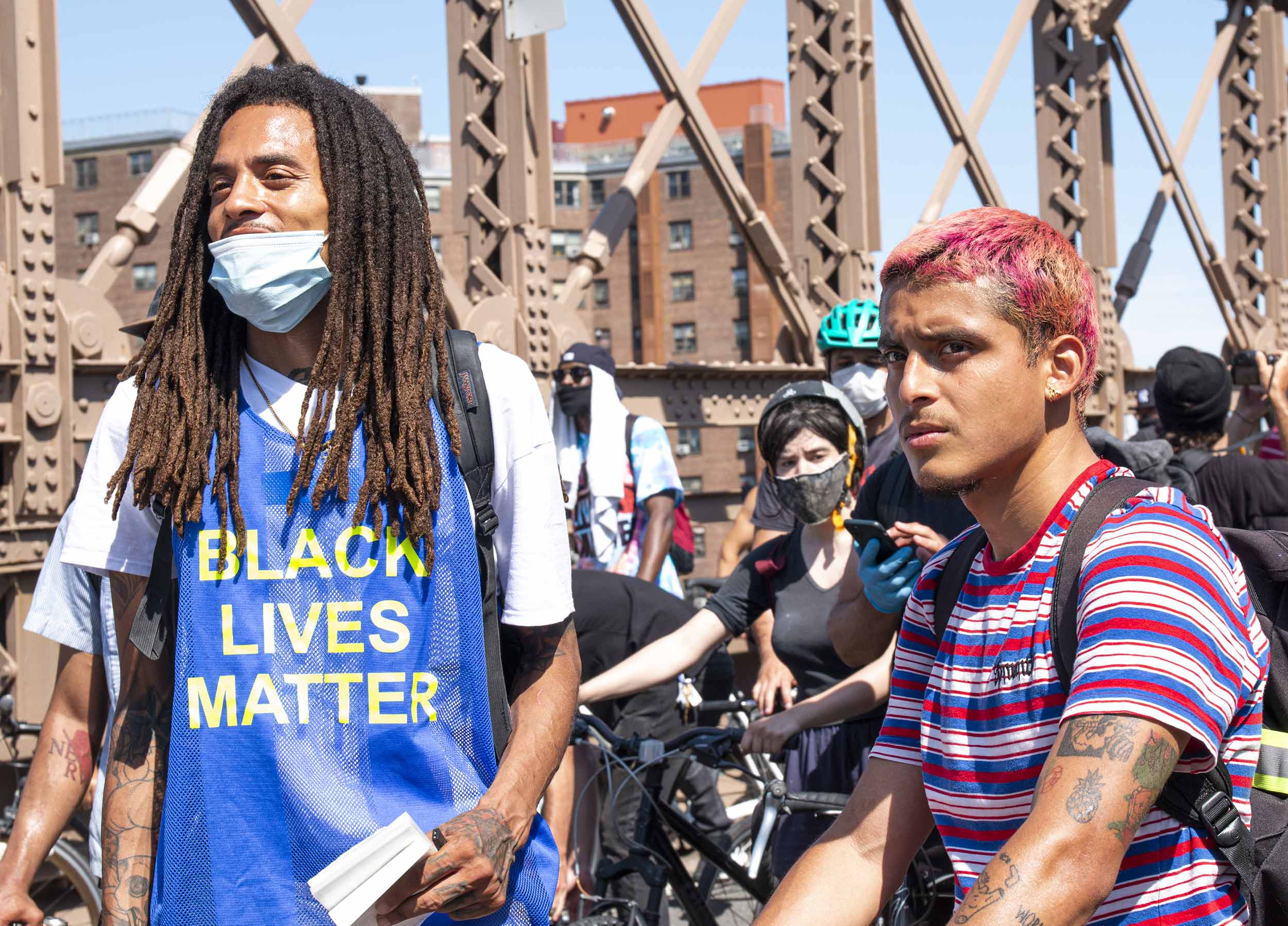 After only three rallies, the Street Riders have fostered an intimate sense of family that extends from its co-founders all the way to the very last riders that bring up the rear. One only has to look at the comments section on their Instagram posts to get a sense of the genuine comradery their rides inspire. Nevertheless, it is the hope of the entire Street Riders team that their ethos of community extends far beyond New York City and, more importantly, beyond bike riding.

To build a community is to build a foundation for systems of change. As co-founder Heins Evander, 21, explained, “outside the implications of just a protest and riding bikes, community building is the best way to destroy stereotyping. That’s the best way to destroy racial tension. What we’re hoping to do with having everyone get to know each other is retain and maintain conversations long after protests are over. If we don’t know who we’re protesting with, nothing’s going to change.”

Saturday’s rally was Street Riders NYC’s biggest and most organized ride to date. In many ways, it was a litmus test for the group’s organizing capacity and ambitions of national expansion. The decision to start in Times Square was no accident. Before Street Riders NYC can expand to other cities, “we have to create a foundation that can’t be shaken up,” says Hamilton a few days before the rally. “That’s a big part of Saturday’s ride. If we can showcase 15,000 people in Times Square on bikes, that’s never been done before.”

Although the turnout may have fallen short of 15,000, the rally was by no means a failure. For one, the team successfully lobbied Citi Bike via twitter to provide free bike access across all New York stations during the rally. Say what you will about Citi Bike’s motivations for such solidarity, this was still no small measure of influence. 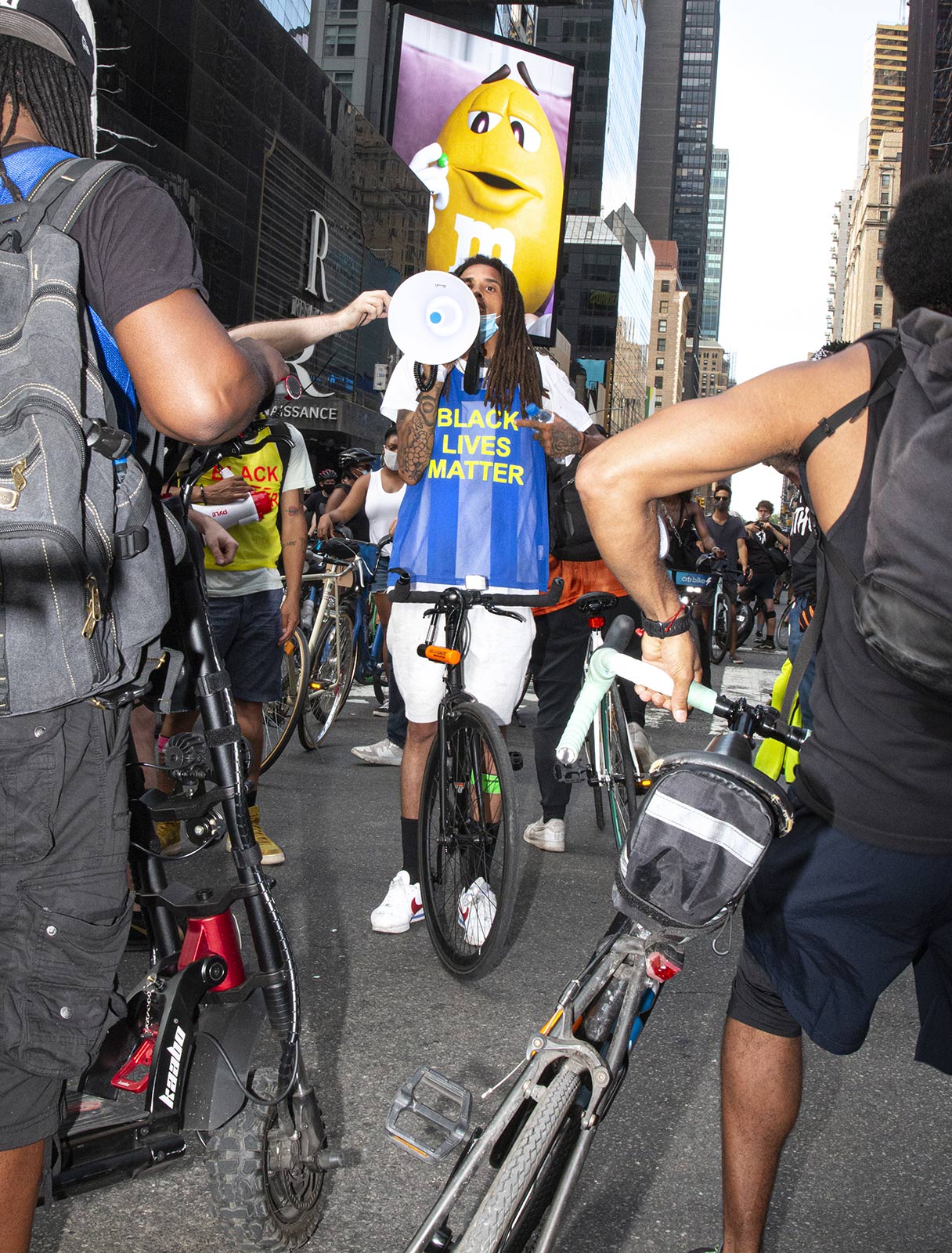 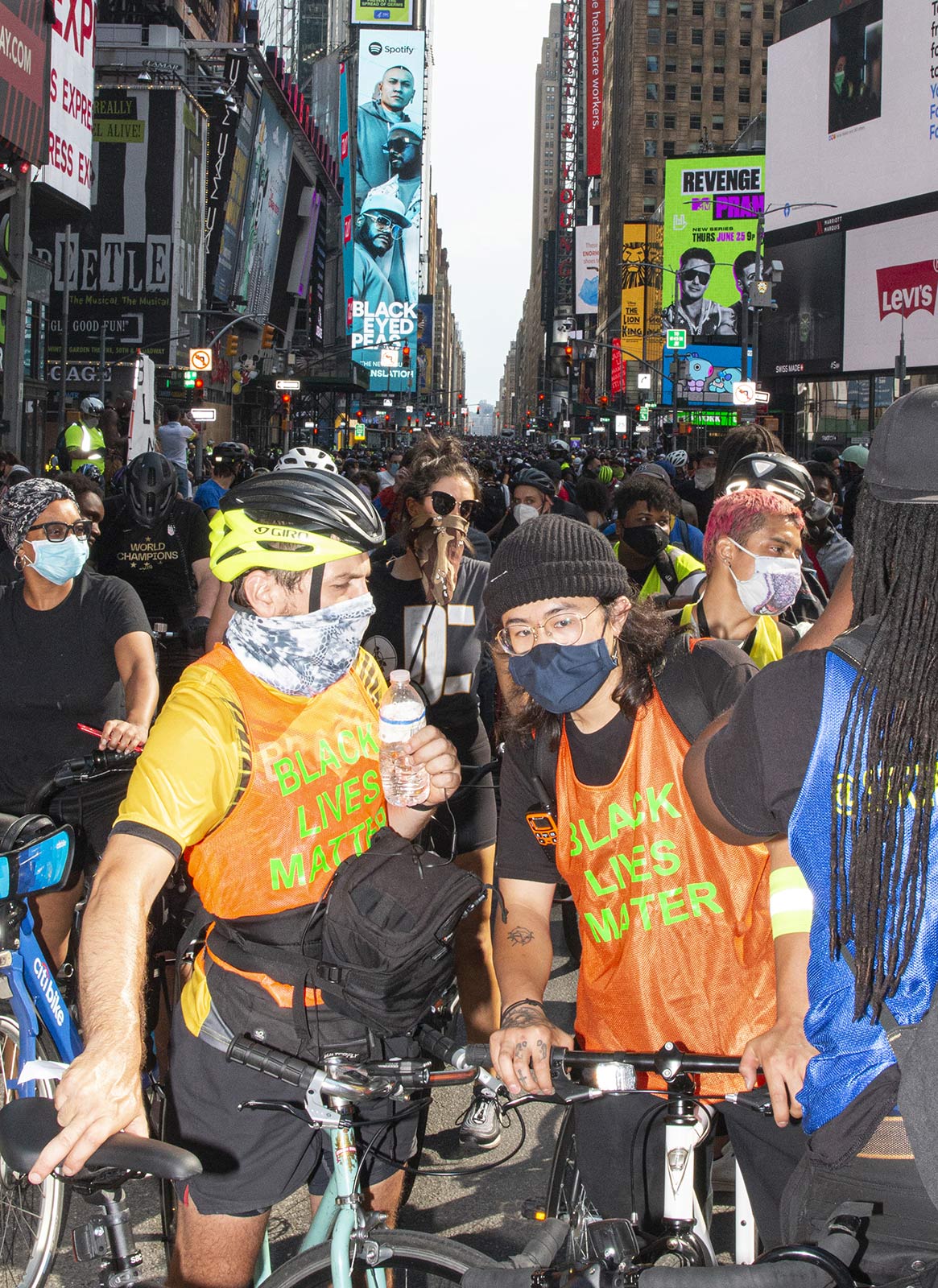 Street Riders NYC effectively crowdsourced the biggest billboard to ever occupy Times Square without a single penny. Any billboard, be it analog, digital, or human, is dependent on its ability to simultaneously grab the public’s attention and communicate its message for its success. To the Street Riders team, every biker, scooterer, skateboarder, and rollerblader acts as a mobile billboard for change. In total, Saturday’s ride traversed over 25 miles from Times Square to Harlem and back down to Battery Park. Street Riders shutdown entire roads, including the West Side Highway, causing traffic delays well beyond the ride’s route. As the ride progressed, the protest grew in size. A day after the rally, Kerre tells me the team woke up to over a hundred DM’s from people saying they rushed to grab their bikes and join in.

At its longest, the rally stretched 4.7 miles long. For some perspective, the entire island of Manhattan is only 13.7 miles long. This is all to say that by the end of the ride, Street Riders NYC’s message successfully reached the eyes, ears, and hearts of millions across the city.

This magnitude of such a feat was not lost on the team. At the rally’s end, against the backdrop of the Statue of Liberty, Kerre addressed the crowd one final time, “America can be a better place for everybody. Look at all this, we’re all together. The change begins with us. That’s why we began today in times square. Times Square represents the current, the next, the new. We were that new big billboard. All of us, all of you.” 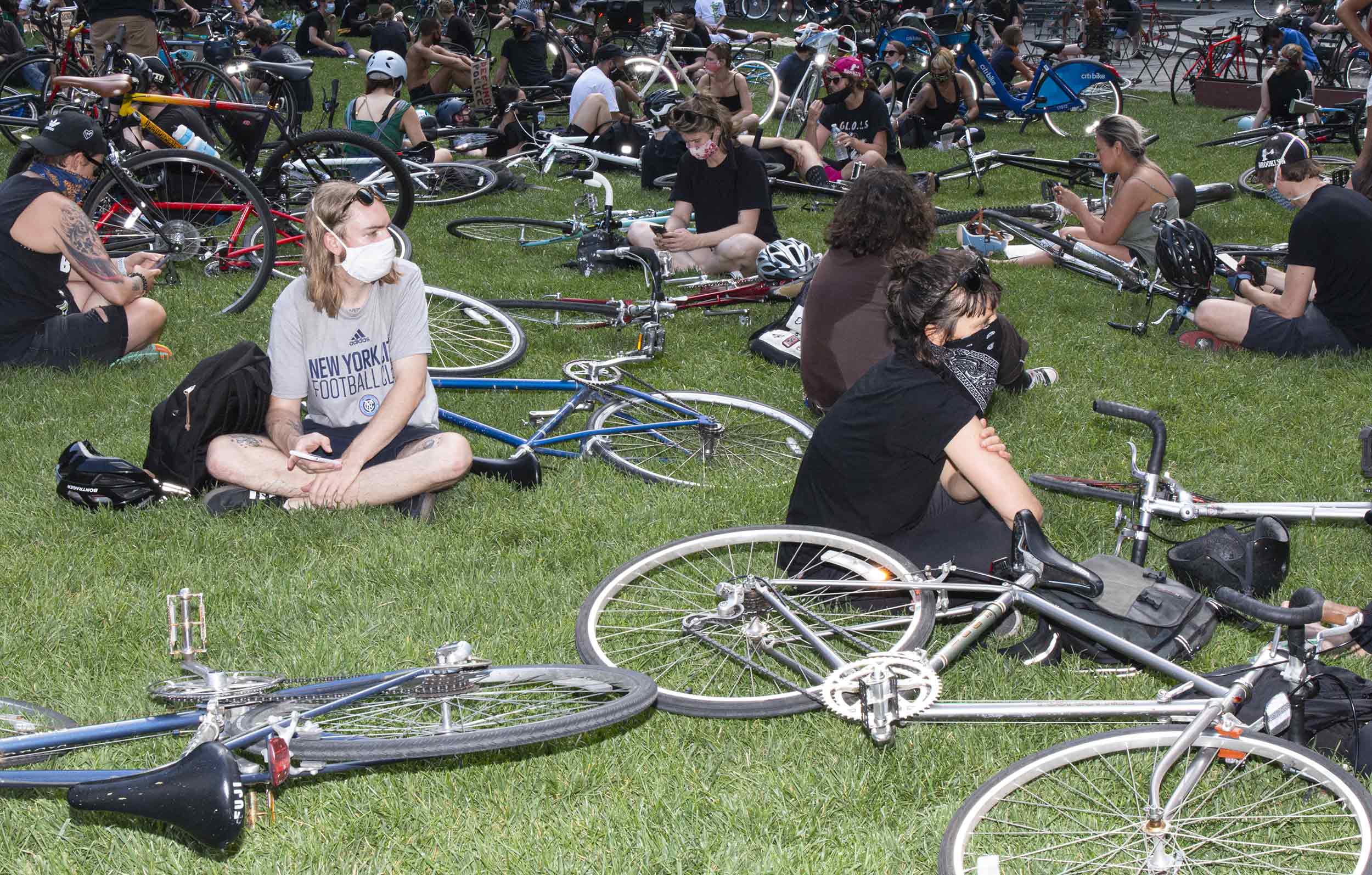 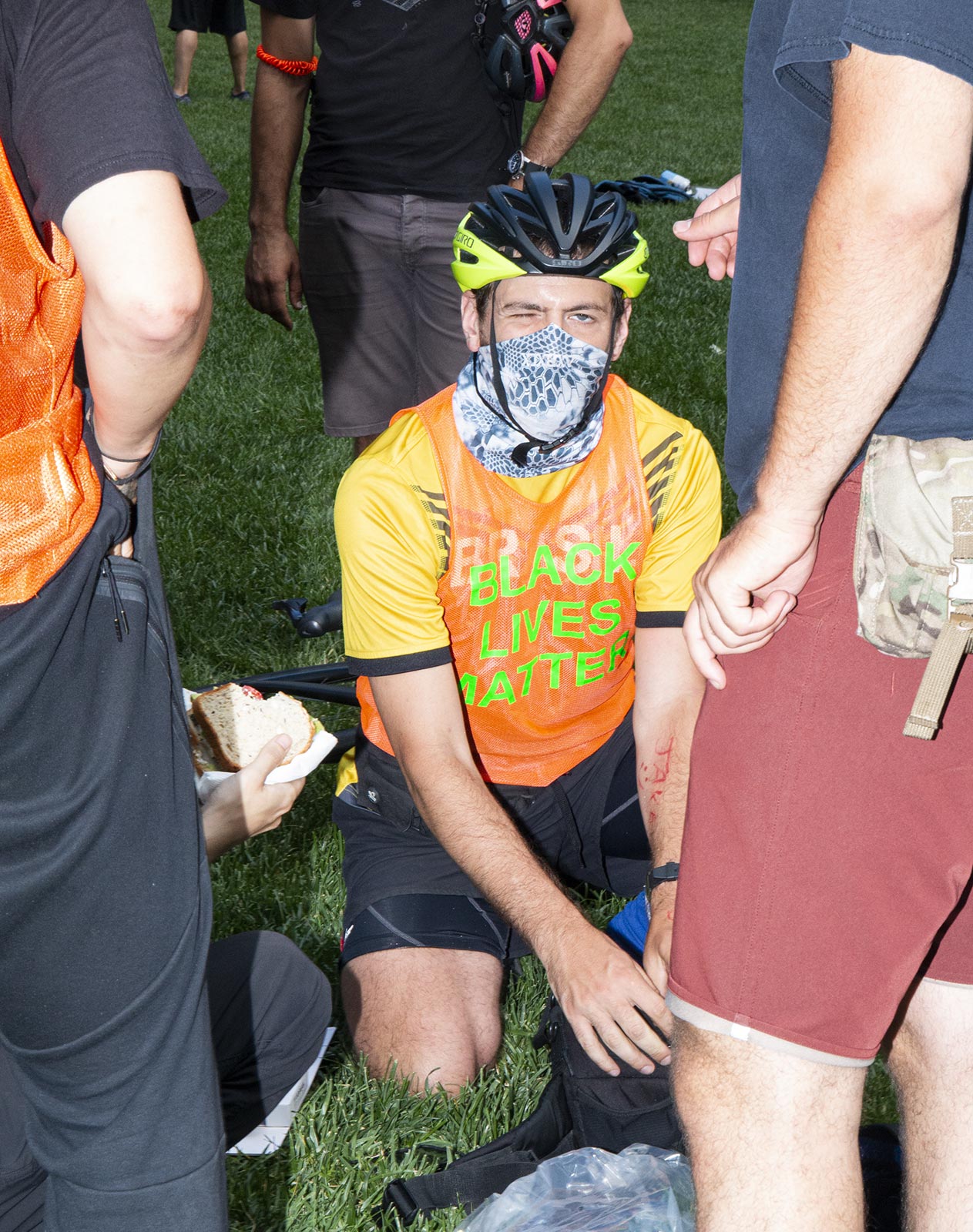 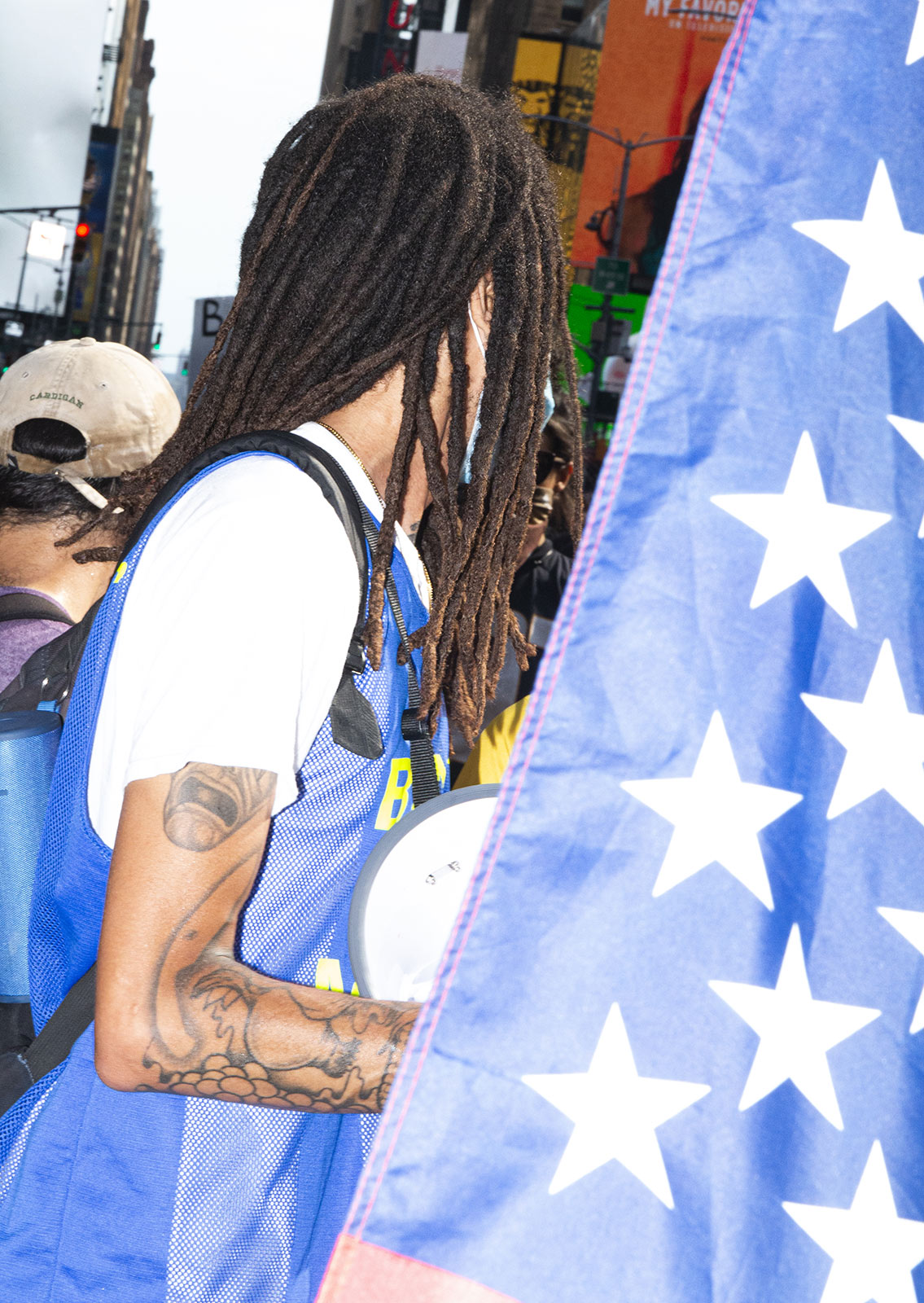 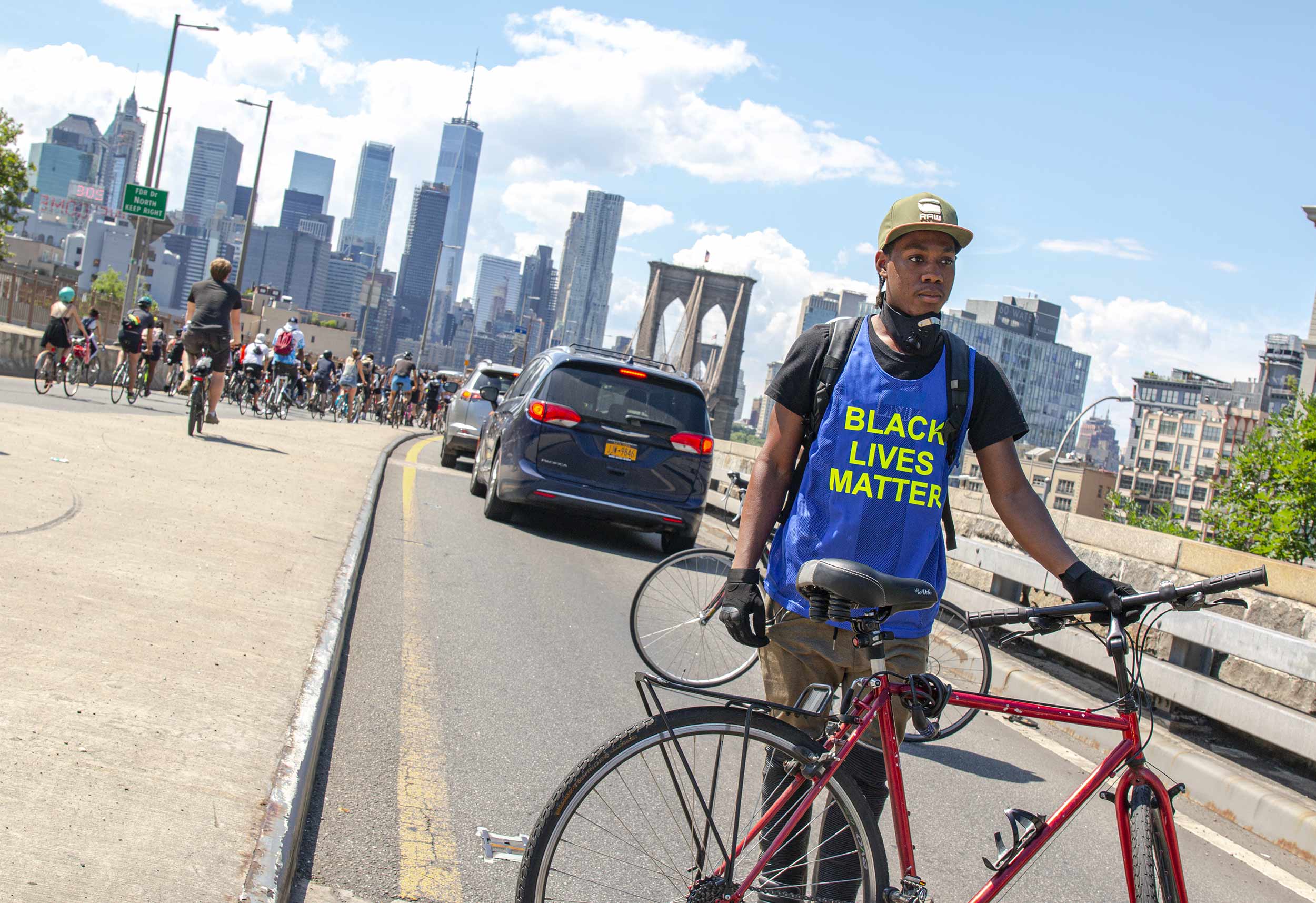 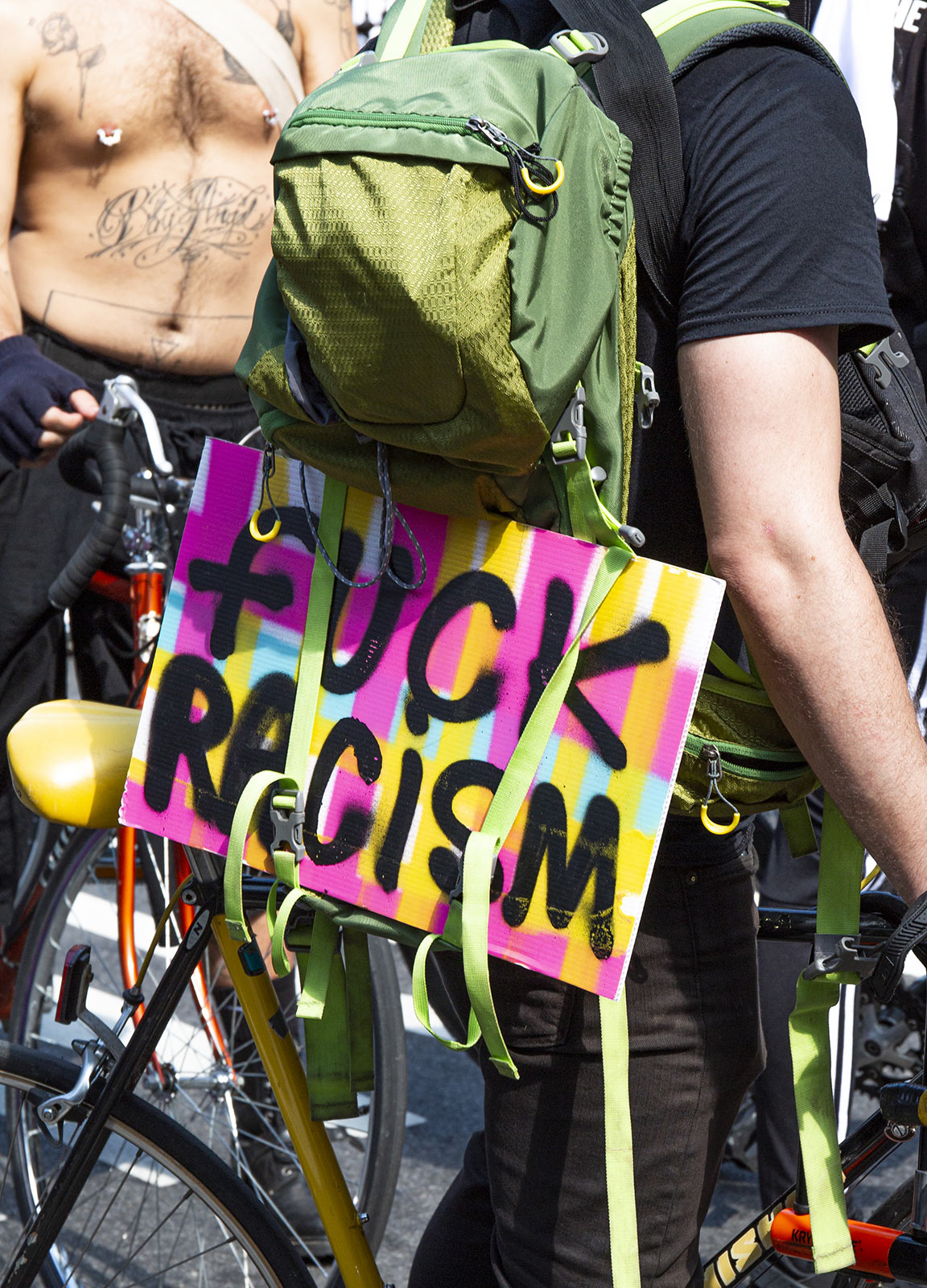 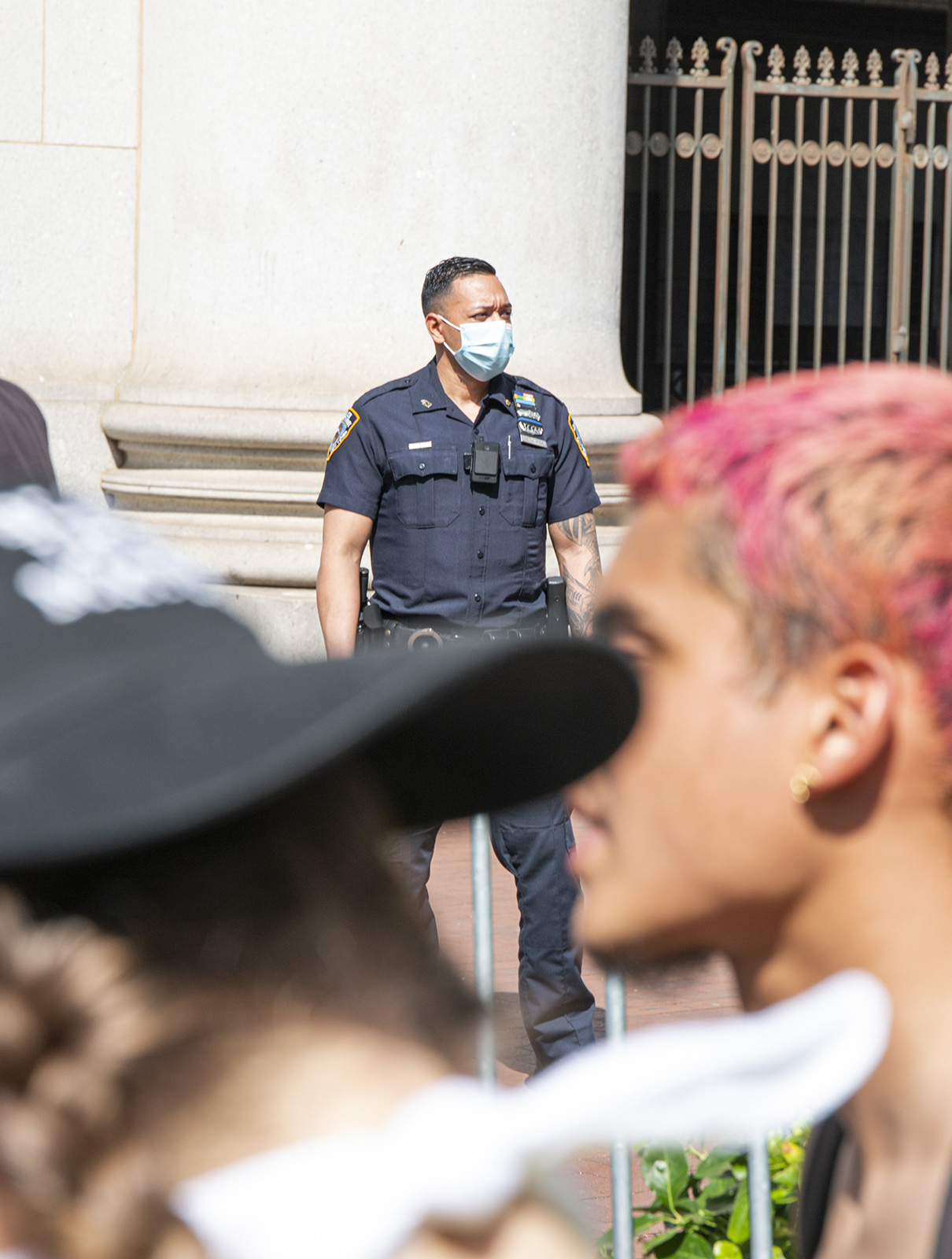 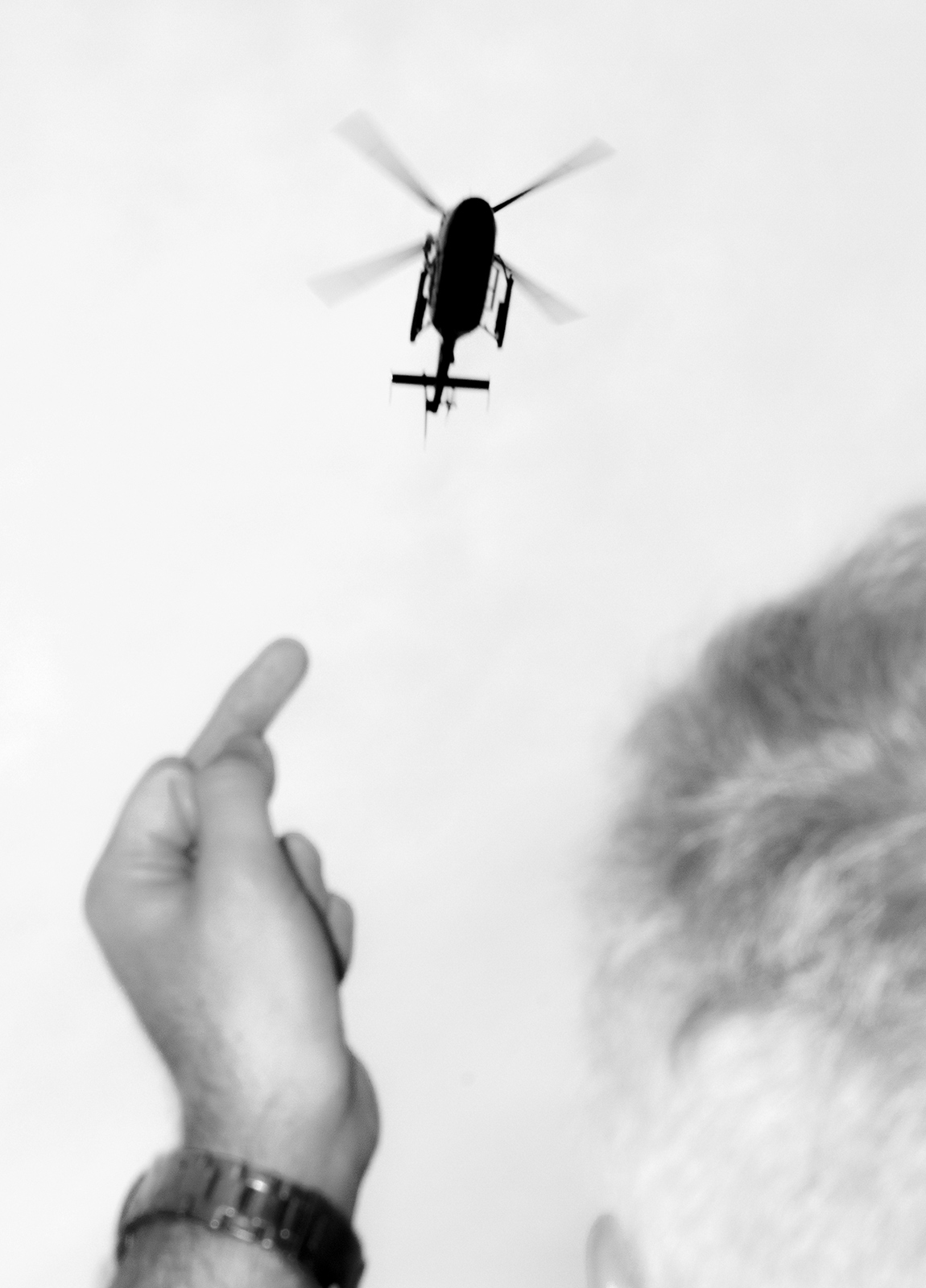 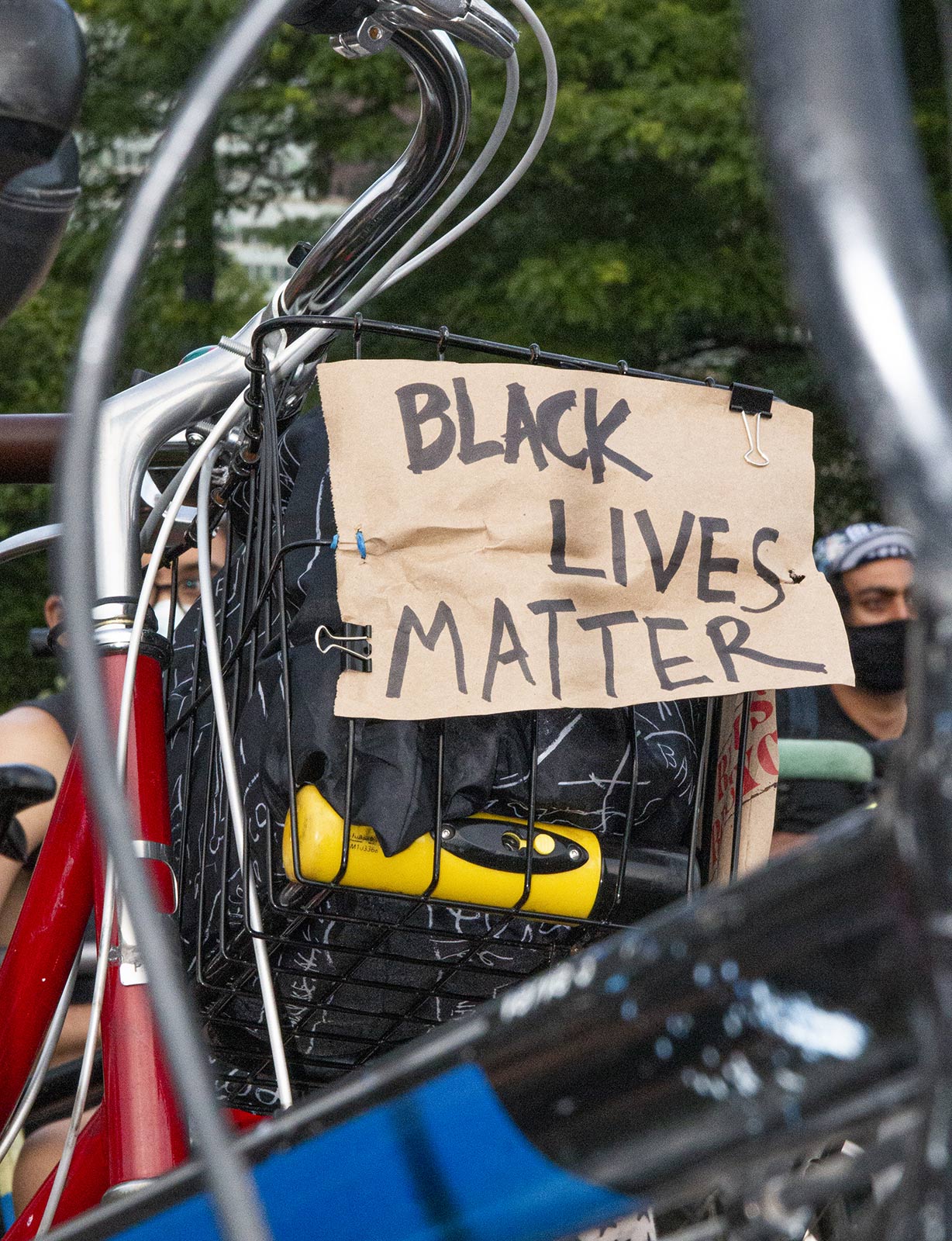 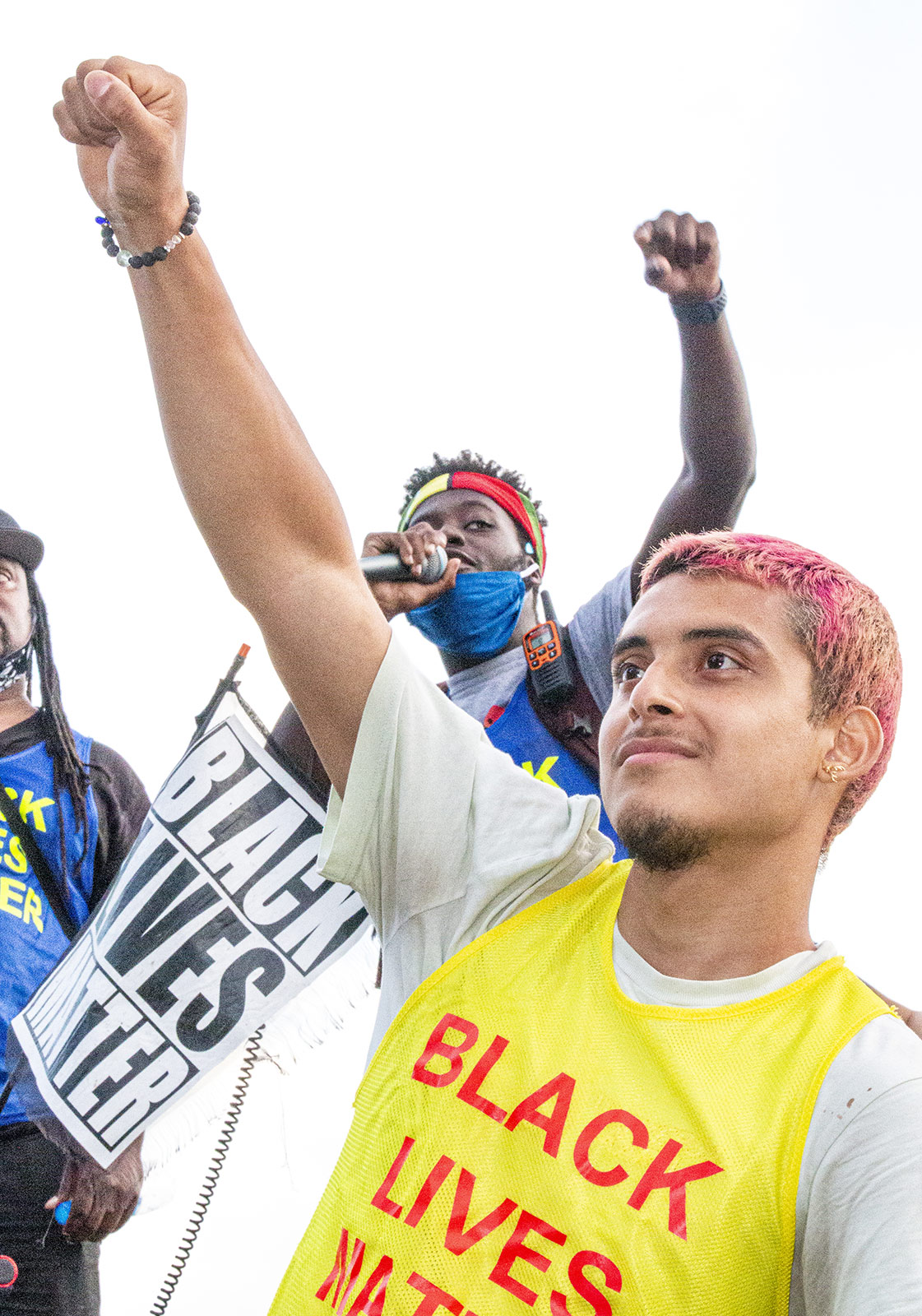 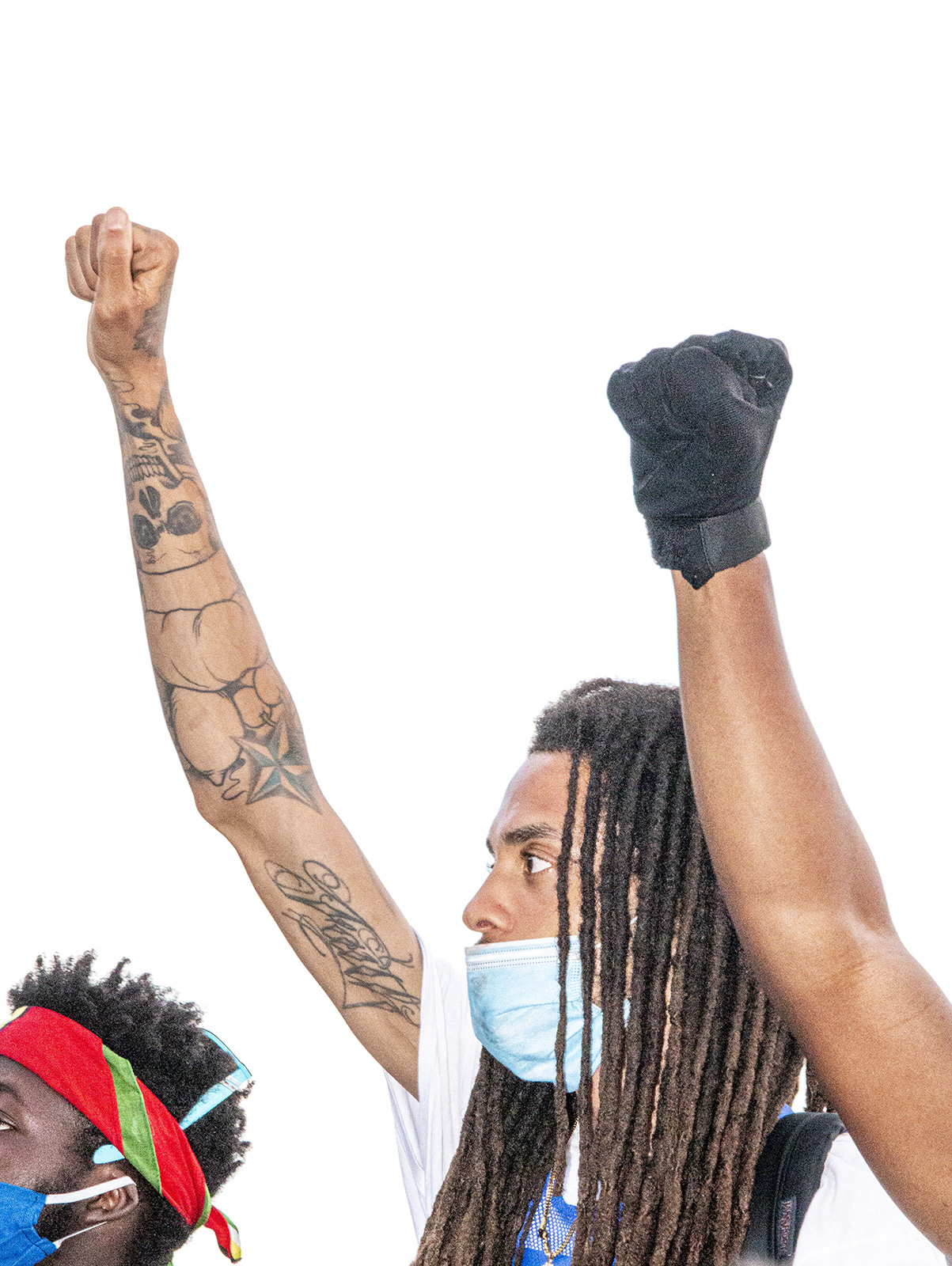