The photographer's portraits of Aaliyah, Leonard Cohen, A Tribe Called Quest, and more are on view at Grimm Gallery.

Tupac Shakur stands idle and somber in a desolate field. Aaliyah, brightly-lit, meets our gaze as a shadowy night sky threatens to envelop her. Donald Trump, fragile and dispassionate, stands erect against an ornate rococo hallway. These are just three of the portraits on display at Dana Lixenberg’s exhibition, American Images, showing through Feb. 29 at Grimm Gallery in New York. Totaling 47 works, the exhibition showcases a selection of the Dutch-born photographer’s editorial work spanning the ’90s and early aughts: images that have come to define Lixenberg—and her subjects.

American Images is divided into two sets of work. The main gallery is devoted to Lixenberg’s select portraits of American icons, while the downstairs gallery is dedicated exclusively to Lixenberg’s photographs of hip hop artists Tupac Shakur and Biggie Smalls. Their bright lives propelled rap music into the mainstream before their violent and untimely deaths revealed the genre’s potential dark side. VIBE magazine commissioned the photographs in 1994 and 1996; until now the portraits of the two hip hop moguls have not been shown in America.

“When I meet young people now,” Lixenberg says, “they see this middle-aged white woman. So sometimes it’s difficult to connect me to these images.” The difficulty, in part, is that the images have taken on a life of their own outside of Lixenberg’s proprietorship. 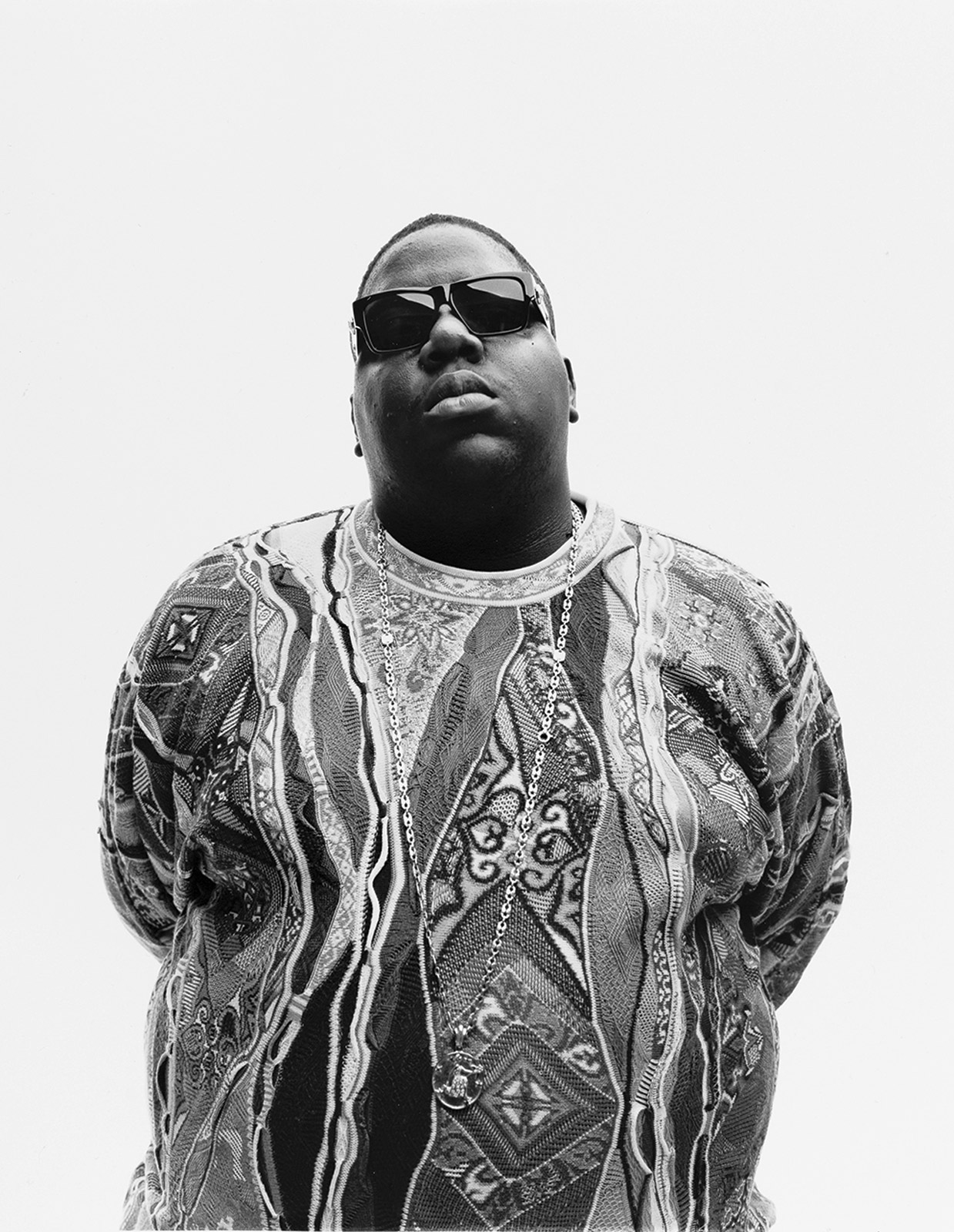 “Some years back, I started noticing my photographs of Tupac and Biggie were being used everywhere,” Lixenberg says. In 2015, the photographer initiated a series of lawsuits against a number of offenders, including Spotify and Bioworld, an apparel manufacturer that designs (in their words) “pop-culture products.” Following a settlement, Lixenberg decided it was time to exhibit the photographs in her own vision—an effort, perhaps, to exert ownership and show photographs of Biggie and Tupac in their original context, replete with contact sheets and outtakes from her original shoots. In 2018, Lixenberg released a book, Tupac Biggie, which seems to have inspired the gallery’s downstairs, dedicating an entire gallery wall to a diagram that plots the trajectory of Lixenberg’s images into the world—where they’ve appeared and how they’ve been appropriated (Bart Simpson as Biggie Smalls was this writer’s favorite). The images explode out from left to right across the wall to illustrate the photographs’ evolutionary trajectories over time, with quotes from Russian media philosopher Vilem Flusser appearing elliptically throughout. (A veritable Big Bang of hip hop imagery, one feels.)

Lawsuits notwithstanding, it’s difficult to imagine a more appropriate time for these images to be exhibited. Against the backdrop of an increasing political and cultural chasm in the United States, these images are a time capsule showcasing a prelapsarian vision for American life. In these portraits, A Tribe Called Quest hasn’t disbanded, model Kate Moss is on the edge of stardom, and Donald Trump is, well…just a garish business man. (Though John McEnroe remains curiously ageless and surly—some things never change, I suppose.)

“I’ve taken all sorts of portraits and I’ve put a lot of myself into them. I project myself onto the subject,” Lixenberg tells me. “I’m looking for a certain connection, emotion, or energy, or something I find interesting. Clearly there is no objectivity ever in portraiture.” 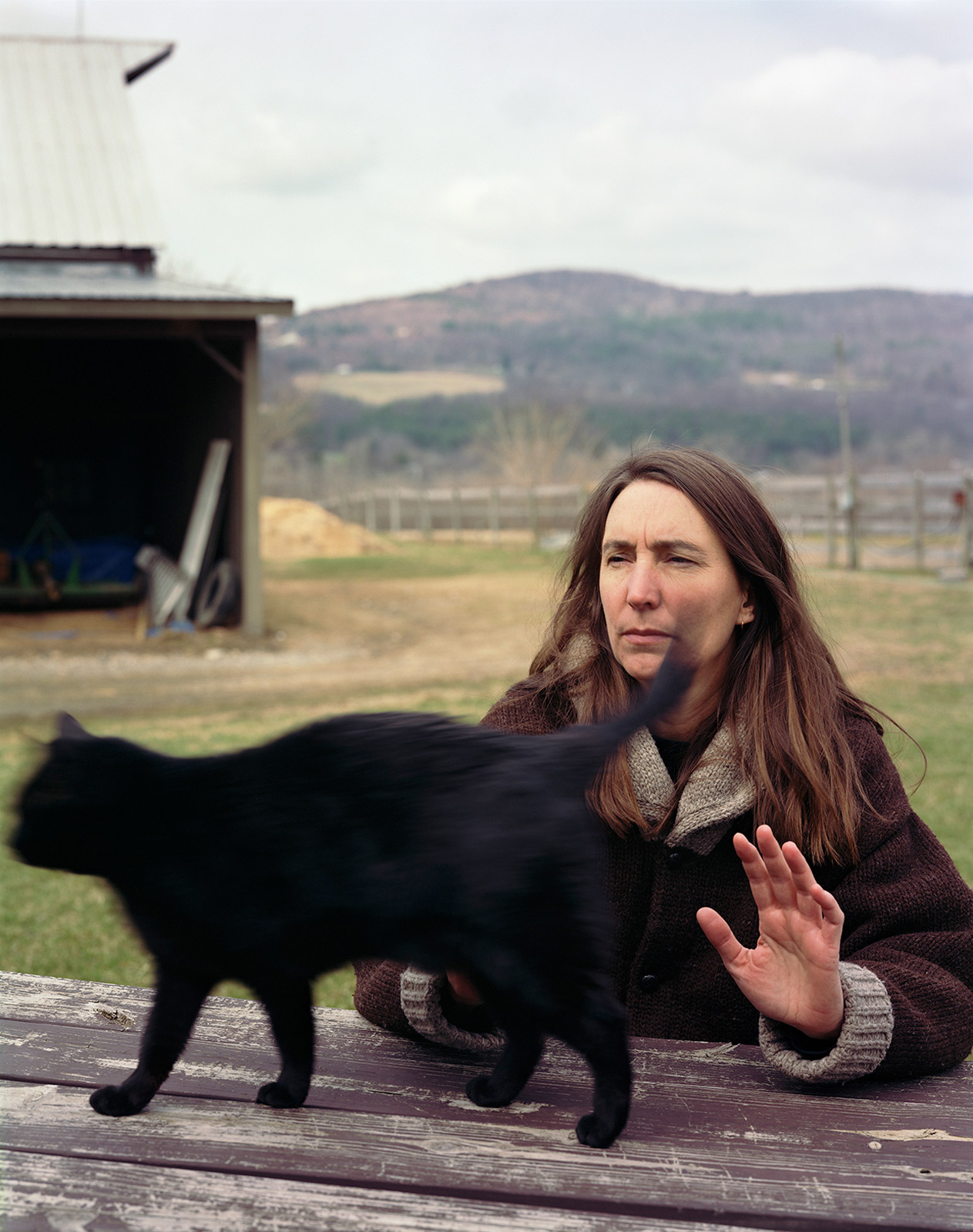 And yet, Lixenberg’s portraits are remarkably honest in the photographer’s ability to see past celebrity and stardom. These portraits are both present and prescient. Photographs that presage future events. An introverted Philip Seymour-Hoffman ensconced in a brown leather chair. Heath Ledger, unaffected by the viewer’s gaze, sinks into a commodious white couch. Biggie Smalls, photographed one year before his death, counts a wad of cash. “The position of his mouth in the image,” Lixenberg points out, “it’s almost like you’re hearing his breath. His breathing.” These are the details Lixenberg looks for in a portrait.

In one grainy black-and-white photograph Leonard Cohen lies supine on a striped mattress, resting during his stay at a Zen Buddhist retreat. No matter how peaceful Mr. Cohen’s retreat may have been, the photograph has the eerie mood of a crime scene photograph. Many of these photographs have outlived their subjects, which evokes mournful emotions. You may find yourself confronting your own mortality.

Standing in the main gallery, I was overwhelmed by Lixenberg’s ineffable portraits. I asked other gallery-goers how they reacted to the photographs. Some were struck by the weight of history. Aaron Krepack, a producer in the film industry said the photographs “encourage us to think about the past, present, and future. Several photos, especially Tupac’s and Biggie’s, strike that balance. The moments hold so much weight, because we know the subjects’ history.” 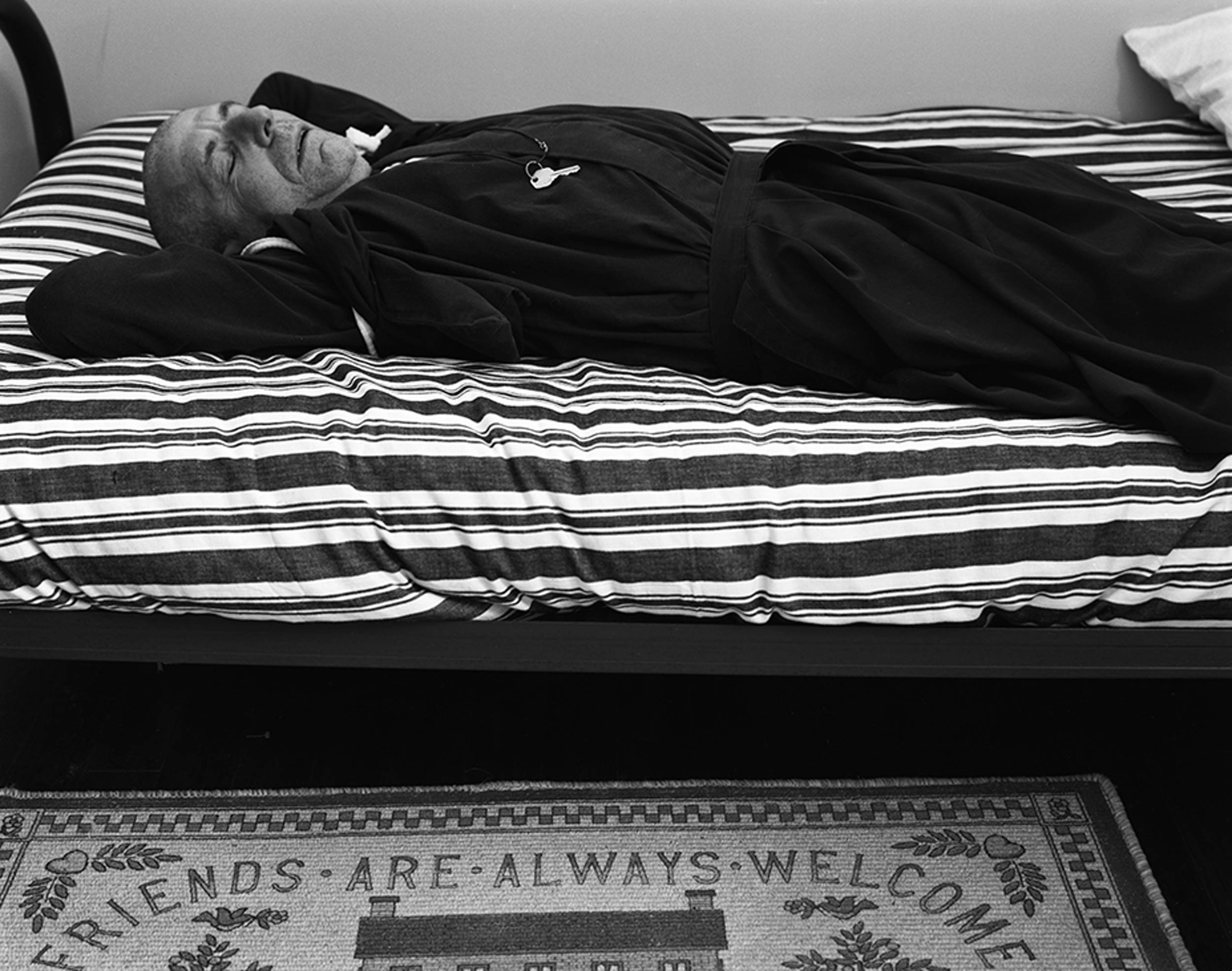 Some viewers felt encouraged to take pride in their own identity. Olivia Savannah Logan said, “In experiencing the American Images exhibition, I felt empowered. As an African American, there was an element of satisfaction seeing hip hop pioneers accredited for moving American culture, as their accomplishments are often confined to the music industry.” In Dana Lixenberg’s America, all subjects are treated with equal dignity; all contribute equally.

“Hip hop was defined by gritty depictions of street life. But Lixenberg’s photography highlights the human side of these stars,” said Romie Sachs, a New York native who works in the music industry. “Her iconic images defined a generation and the images help bring us closer to our most revered heroes.”

Almost all of the photographs include one subject, singularly defined within the frame, leading to an emotional love triangle between the photographer, the photographed, and the viewer. There is one ‘couple’s portrait’: Jenny Holzer and a sardonic black cat that crosses extrusively across the frame (a black cat’s obligation, I suppose). The blurred black cat emphasizes Holzer’s stillness, a byproduct of Lixenberg’s technique. She works exclusively with a large format field camera, which prohibits the photographer from seeing through the camera as the image is exposed. Thus, the subject must remain fairly motionless at the moment the film is exposed and the image is created. “I’m trying to create a space that allows my subjects to give in or give over to the process and reveal something about themselves.” 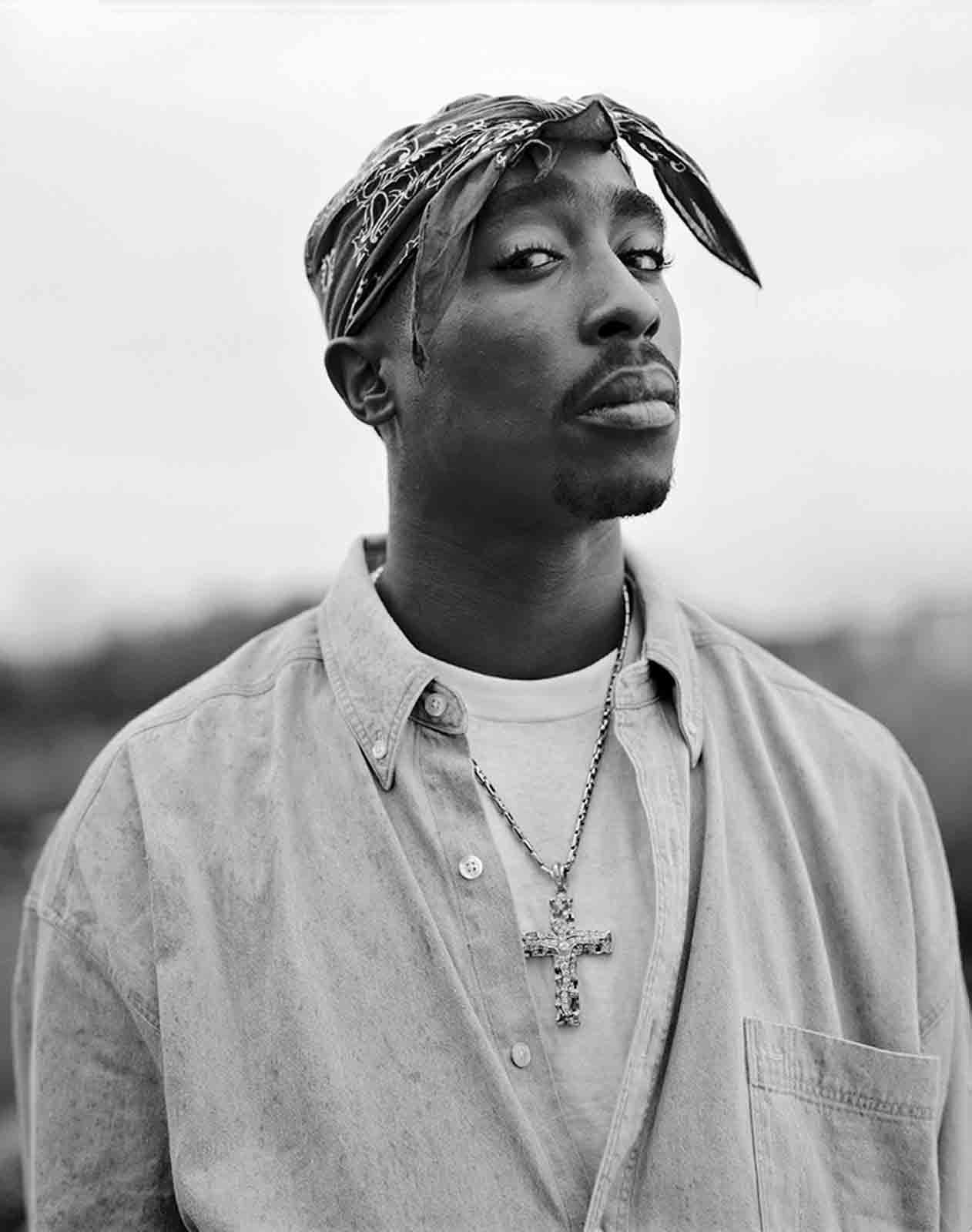 Lixenberg began photographing with a large format camera in 1993, when she produced her first series of portraits in Imperial Courts, a federal housing project in Los Angeles, following the 1992 Los Angeles riots. Concluding in 2015, Imperial Courts (1993 – 2015) is Lixenberg’s magnum opus. In 1993, the portraits caught the eye of George Pitts, the founding photo editor of VIBE magazine. Pitts then published a portfolio of Lixenberg’s Imperial Courts portraits before he began commissioning her as a regular contributor, beginning with her portraits Tupac Shakur for VIBE’s third issue in 1993. In a 2001 essay, Pitts wrote that her photographs helped establish the magazine’s visual tone. He praised Lixenberg’s ability to capture her subjects’ emotions without being overly sentimental. Speaking of her commissioned work, Pitts extols Lixenberg for her ability to extract “ordinary human qualities” from her subjects, adding that she “permits a healthy contrast with their larger-than-life personas. It is almost the reverse of what she does with non-celebrities.”

In the early 20th century E. Robert Kelly coined the phrase “specious present”—a neologism asserting that the present is a fictionalized concept. More important than its fiction, Kelly noted that the present is a crucial connective tissue in our quest to understand the past and future. So, in these photographs, we see history, we see the future, all linked by a present, no matter how fictitious. That notion—the specious present—never eludes me when I experience a photograph. A fictional moment that aids us as we grapple with greater truths. But Lixenberg is not so wrapped up in concepts of fiction and truth. “As soon as the image is made it becomes separate from the subject. And of course, as a photographer, you hope there is something truthful that resonates with the viewer. But the viewer will have their own personal projections and interpretations.” So, look closely. Because, in these American images, Dana Lixenberg isn’t just showing us her subjects. She’s showing us ourselves. 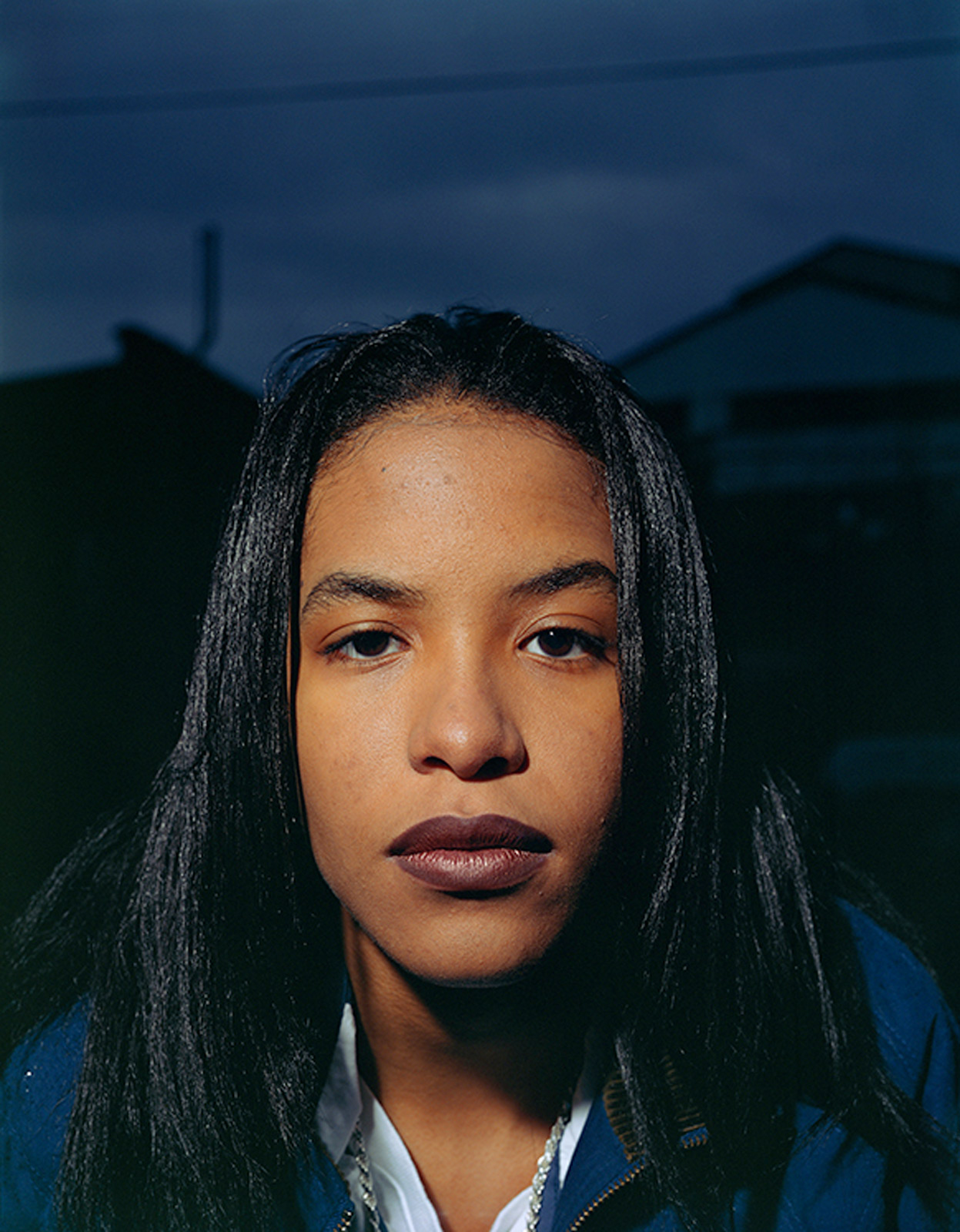 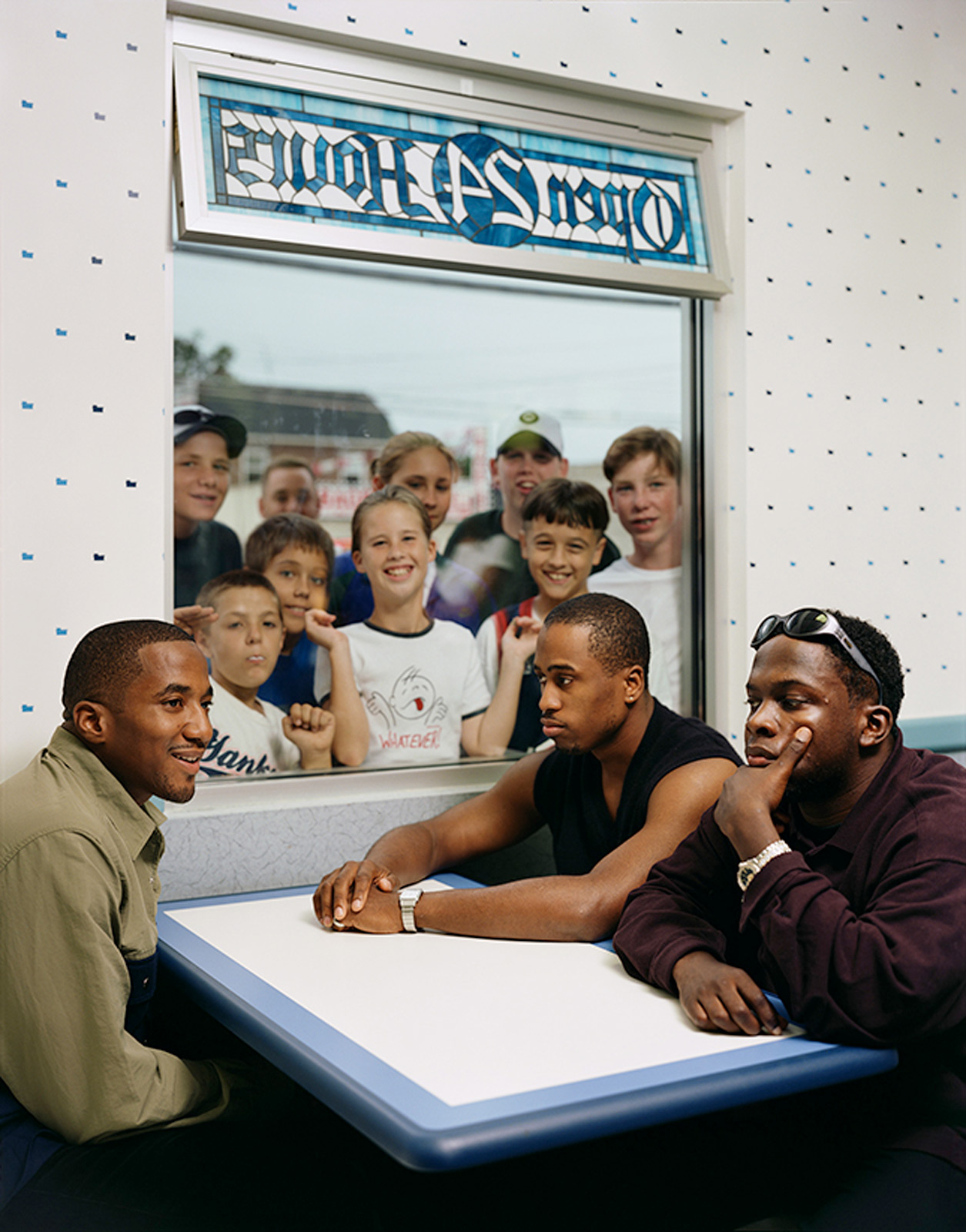