‘Contact High’ provides behind-the-scenes look into the creation of hip-hop's most iconic images.

Archiving and preserving the photographic history of an entire genre of music is a daunting task that few would willingly shoulder. Luckily for hip hop heads and fans of pop culture history, author and curator Vikki Tobak took it upon herself to collect the most important photographs in rap’s history. Contact High: A Visual History of Hip Hop, is a chronological survey of iconic images of hip hop superstars and their often unseen, corresponding contact sheets. After crafting an exhibition for Contact High in Los Angeles, Tobak has now brought the show back to the birthplace of the genre, New York City, at the International Center of Photography. The exhibit, which opened on January 25th, presents the photographs alongside original contact sheets and legendary props and garments from photo shoots—Rakim’s Dapper Dan exclusive jacket and Biggie’s crown are displayed amid the towering faces of Tupac, Tyler, the Creator, and Lauryn Hill on the wall.

Contact High spans from 1979 to 2012 and depicts rappers and artists from every corner of the genre. Walking through the exhibit, it’s clear how the founding fathers of rap like Kool Herc and Fab 5 Freddy influenced the next generation of artists like Big L, Gang Starr, and Lil Kim, who in turn helped form A$AP Rocky, Gucci Mane, and Kendrick Lamar.

Featured in the exhibition are a slew of photographers who captured the scene and documented its existence for future generations. Among them are Danny Hastings, Jorge Peniche, Barron Claiborne, and Janette Beckman, who have each contributed immeasurably to hip hop culture through their own distinct visions. Here, the four photographers, along with Tobak, share the story behind each of their favorite photographs presented at Contact High. 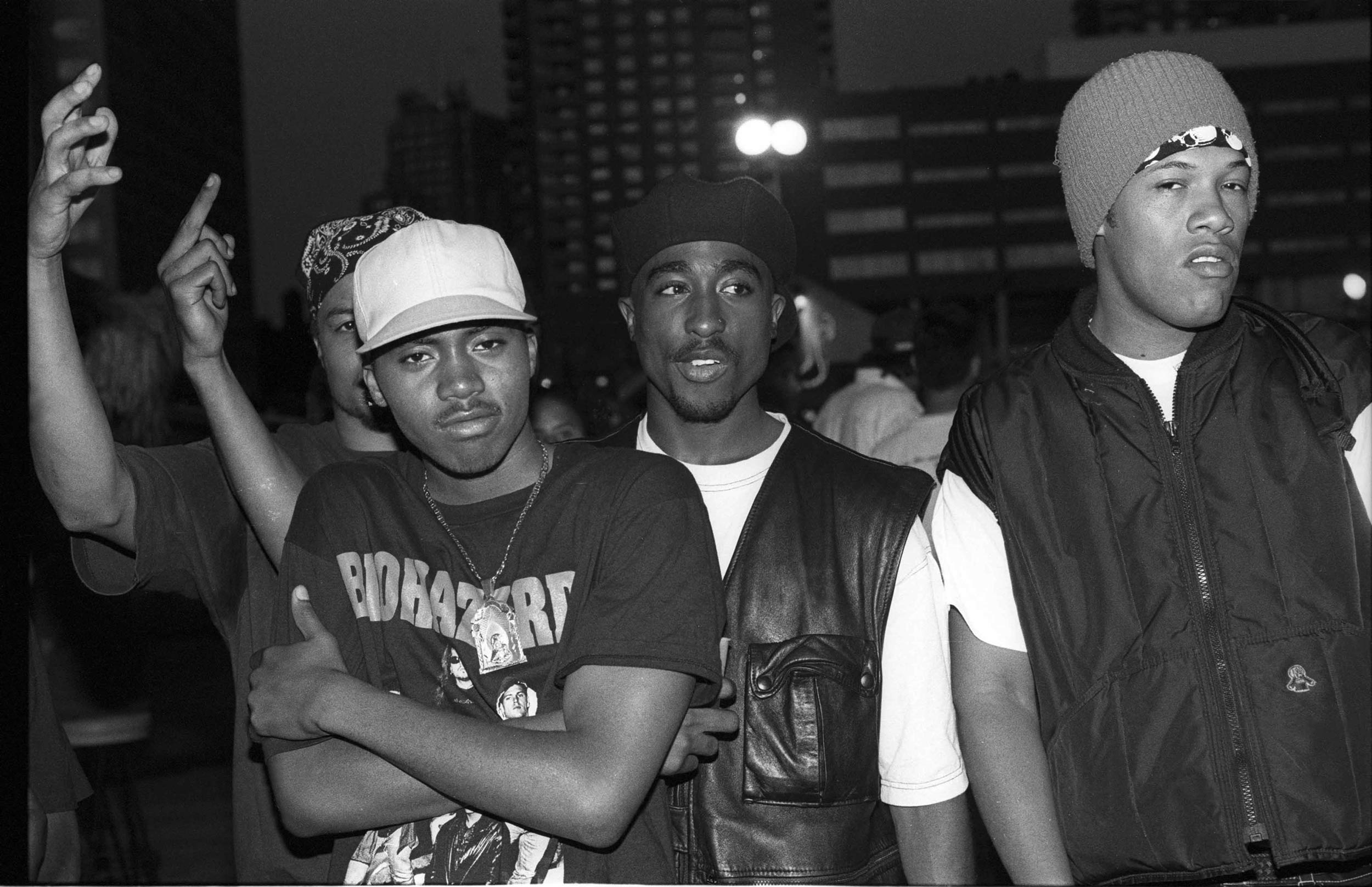 When I was writing the book, I was looking at these iconic images that everyone knew then pulling the contact sheets. There’s this photo of Biggie, Tupac, and Redman that’s out there—everyone knows this photo. So, I asked the photographer, Al Pereira, [to] send me the contact sheet. He sent it to me, and I was looking at it, [and I realized] Nas is in that photo. So I messaged Al, ‘you know, Nas is in your contact sheet,’ and he’s like, ‘I hadn’t looked at this since 1993.” 1993 happened to be one year before Illmatic. So when Al took this photo, Nas wasn’t famous yet. The underground knew him, but photographers were not looking to take his photo. I posted it on the Contact High Instagram, and it turned out that there was no photo in existence of the two of them [Nas and Tupac]—ever. Nas freaked out; he called the magazine that I was writing for at the time, Mass Appeal, and he was like, ‘did someone Photoshop me into this photo?’ Texts were flying back and forth. No, it’s from actual negatives [laughs]. It blew his mind. It’s also special because the guy behind [Nas], his name is Drawz, was his really good friend from Queensbridge who he grew up with and ended up getting shot and killed. It’s my favorite for all of those reasons—the way we found it, that it was so special to the artists that are in it. One thing that [Nas] posted is, ‘these are our family photos.’ That encapsulates what the project is all about: doing right by the artists and the photographers, just showing the importance of archiving. 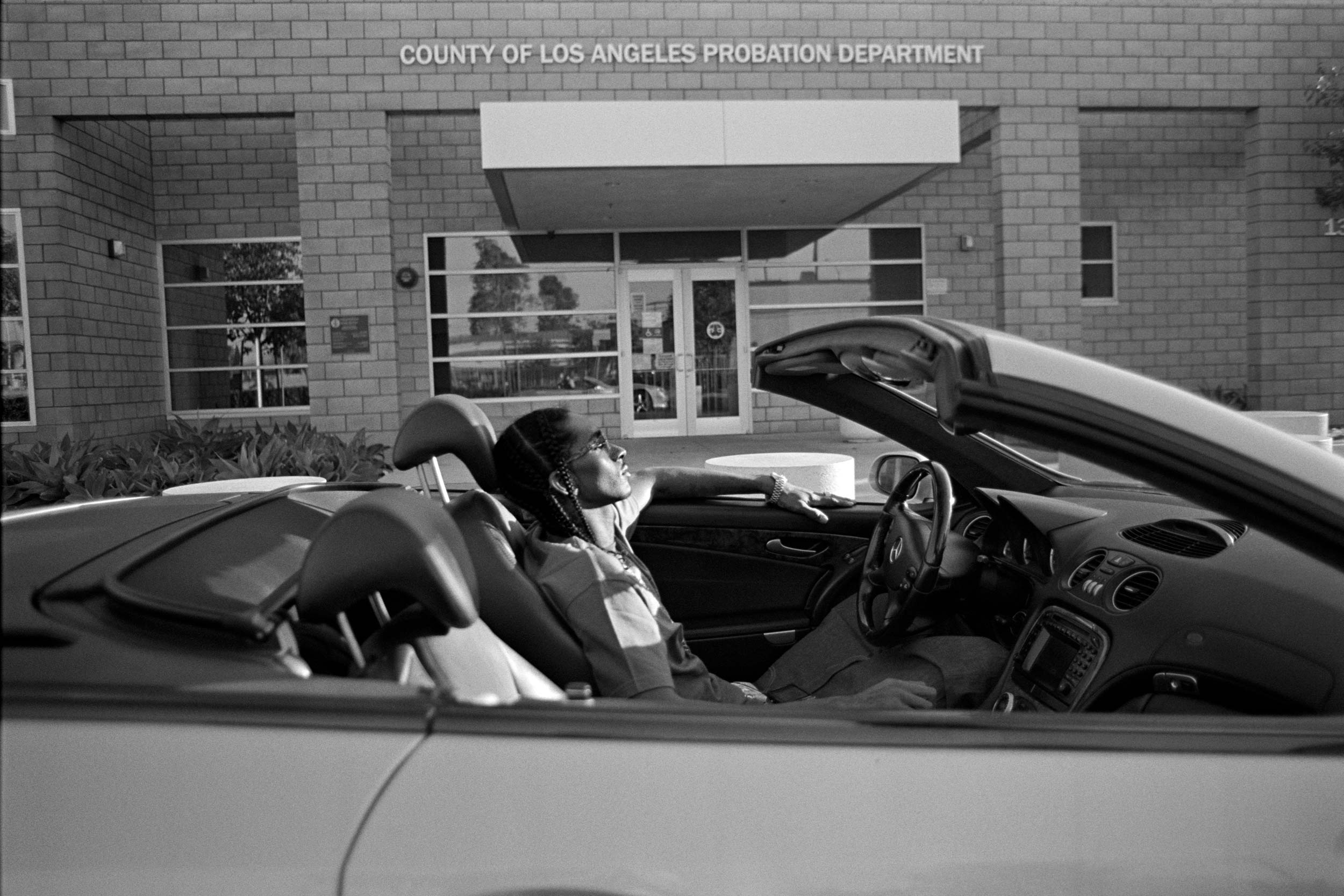 Nipsey [Hussle] and I met in 2008. I was completely sold on his music. I thought the guy had all the intangibles of a superstar. The messaging, the conviction behind his music was powerful and hard to compare to a lot of his peers. At the time I was doing a lot of editorial photography for a slew of different magazines, domestically and overseas. I reached out to Nipsey via MySpace, we established a connection, made small talk—he ended up inviting me to a music video of his for “Hussle in the House,” which was his big single early on in his career. We established a relationship from there.

The opportunity to work with somebody of his caliber was already a privilege, but to work collaboratively in this type of immersive experience over this last decade was something special. This photo is a slice of life of a decade’s worth of work, of photos that we created together. A lot of the stuff that we did was of the mindset that it’d be photo reportage; it’s photo-journalism. It’s not anything that’s contrived. This image in particular is at one of the probation offices at South Central LA. This is Nipsey finally getting off probation, which was a big burden, something that was a nuisance [to him] as a grown man, a businessman, a father, a music artist. As his touring career was catching steam, [he] had to go in with a probation officer to check in and basically say, ‘this is my itinerary for travel, am I clear or not?’ For your career and livelihood to be at the hands of someone else is not a comfortable feeling. So, this was a huge milestone in his life. [It’s] a representation for a lot of young men and women that are plagued with the same circumstances of falling into the trap and trying to get out of the web. He was able to get out of that web, and fortunately, he never got back on probation thereafter. [The photo] is a nice contrast—the past and the present. 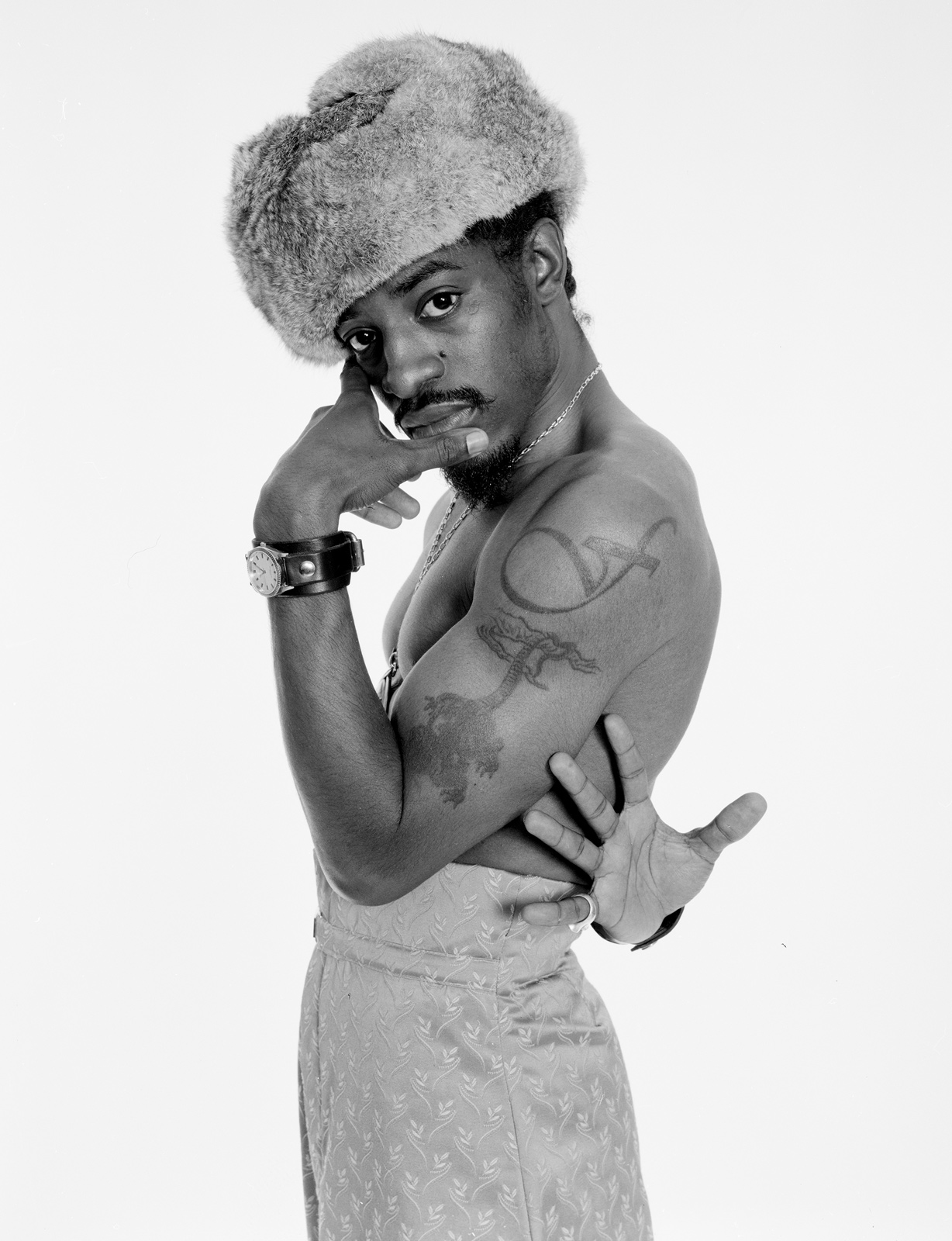 I think it was Spin [Magazine] that commissioned me to take a photograph of this group, Outkast. At the time I was obsessed with this 4 x 5 camera. For some reason I insisted on bringing it to do this portrait session with them. It takes a while to set up. Andre was there, and Big Boi was there, we were in his studio, and they kept playing this song all the time. They were like, ‘what do you think of this song?’ And the song was completely addictive—it was crazy, I loved it, I couldn’t get it out of my head. It turned out to be ‘Hey Ya!’ before it came out. So they were like, ‘do you think it’s good for a single?’ [laughs]. But Andre was a great poser, he looked amazing, and he was wearing these pants that looked like they were made out of some kind of curtain material—so beautiful, and he’d made them himself. I made that picture and a lot of people, especially women, wanted it [laughs]. I think [Andre and I] had this immediate bond. He had a respect for me because I was shooting on this big, old plate camera, and he was curious about it. It’s a long, slow process and I think he relaxed with me. 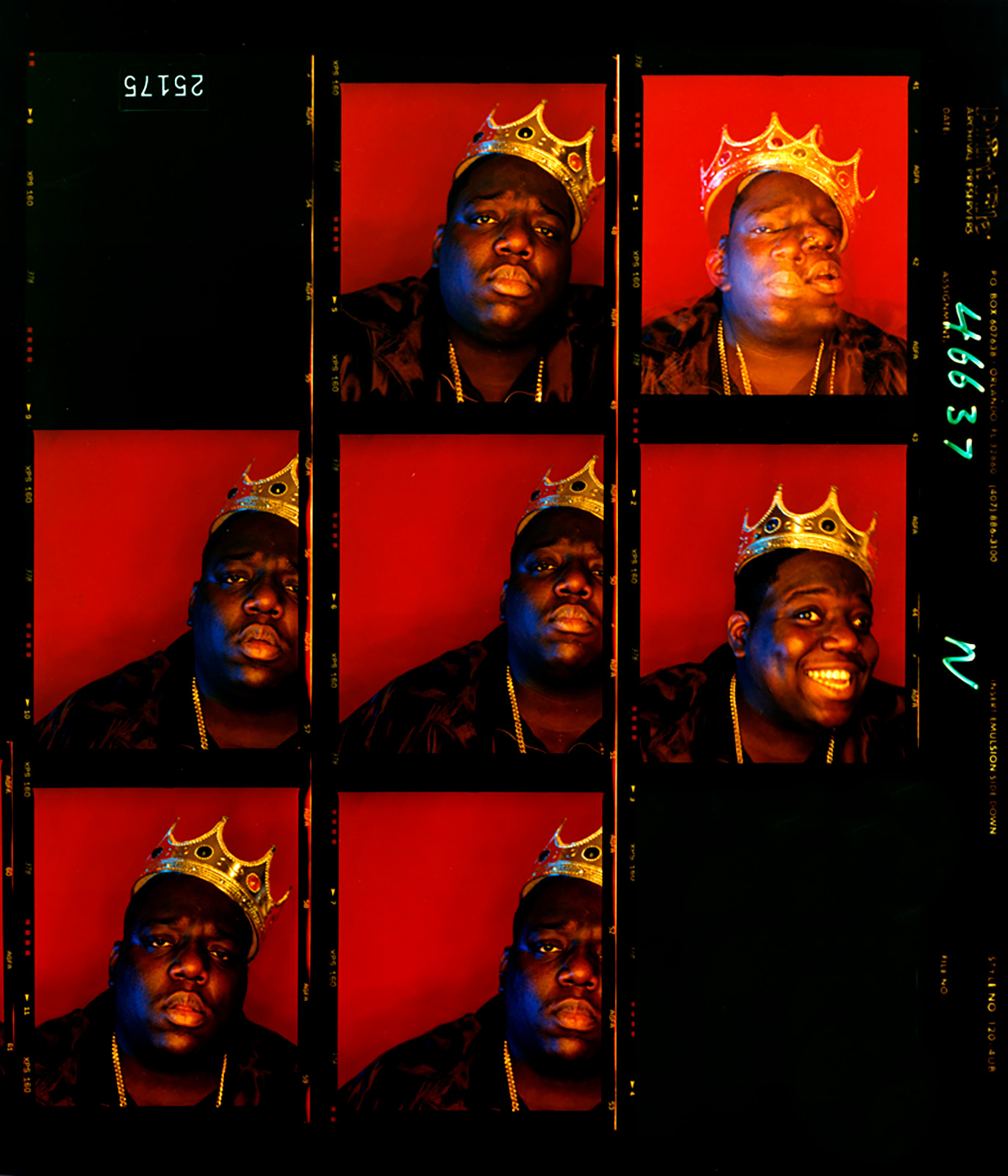 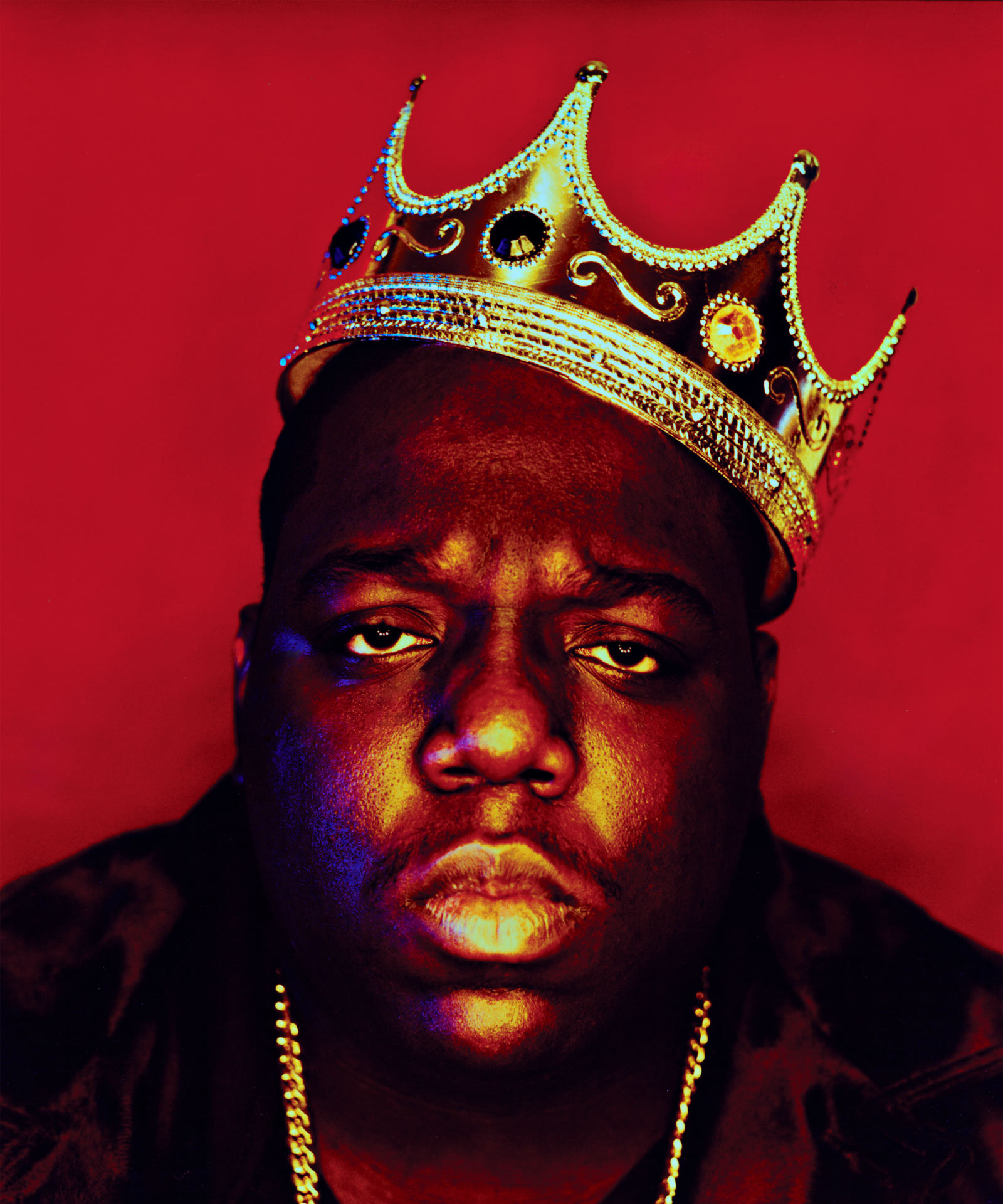 The idea came about because I had already taken Biggie’s picture. It’s called ‘Universal Biggie,’ where he’s in the white suit in space. That one was kind of based on Kingpin from Spiderman. When they came to me and they were like, ‘can you take his picture?’ I was doing a lot of fashion, and I tend to like things that are involved. Back then everyone was wearing a brown Coogi sweat suit that I didn’t really give a shit about. So, I basically told them, ‘look man, why don’t you give him a suit, a beautiful white suit; he’s a big dude, he doesn’t look that great—it’ll look great [laughs].’ So, then they got him a white suit—he loved that shit, the hat, everything. That’s when he started wearing suits. I used to always tease him and tell him he looked like a big fat king. He had some nobility about him. He was a really nice dude. I picked up that crown—it was four bucks—and put it on his head. The thing I liked about the photo the most is that even though it’s just a novelty crown, no one ever brings it up. I’m just glad that it’s left a symbol—something positive and dignified for him. He basically had to die for that photo to be where it is, in a weird way. He was only 24, which people seem to forget. I also did cinematography, so I also worked on some of the videos he was on also. He left my studio to go to California where he was killed—he went straight from there to the airport. 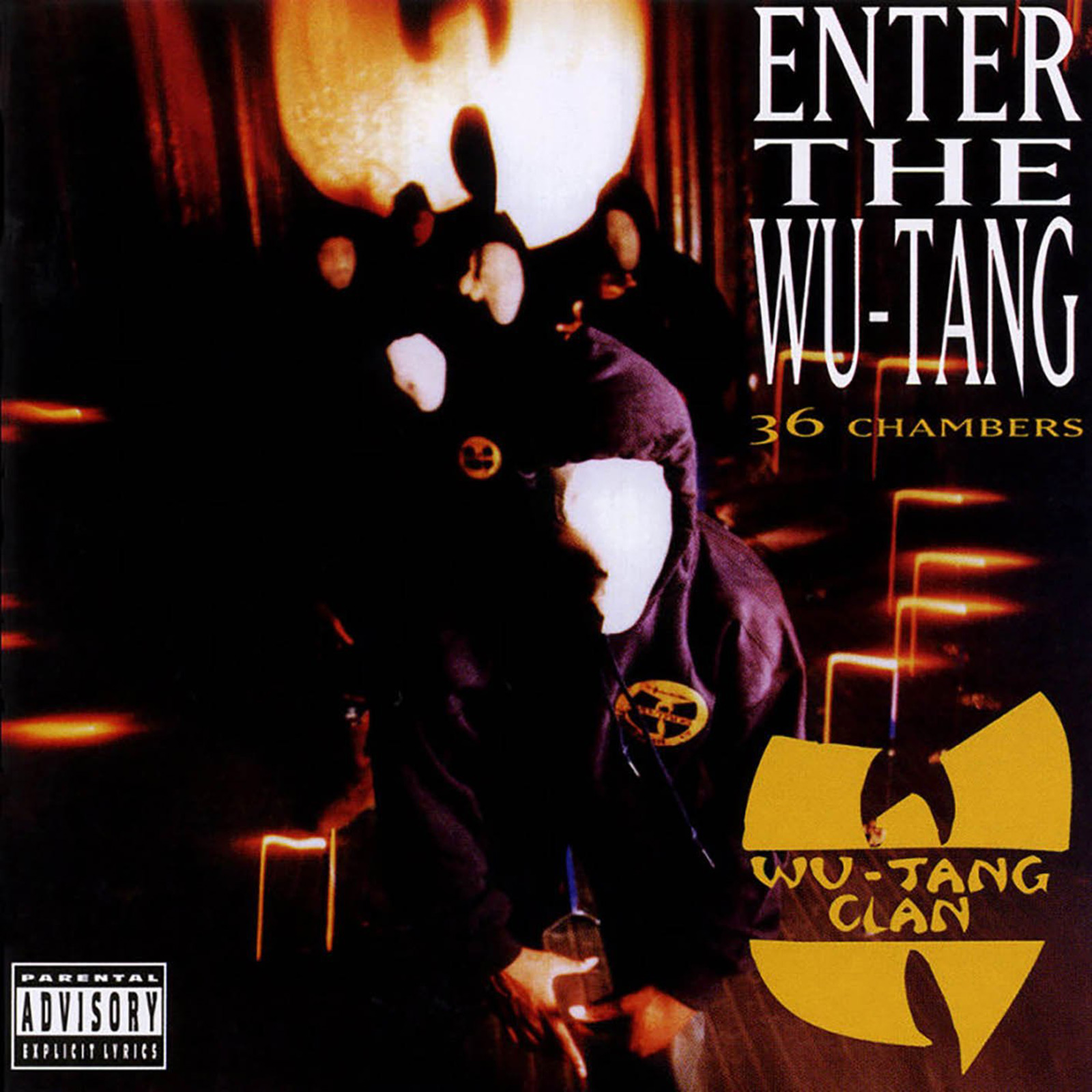 My first album cover was Return of the Boom Bap by KRS-One. I was already connected with RCA and they decided to give me a call and introduce me to the Wu Tang. When I got the call I was in Atlanta at a music industry seminar called Jack the Rapper, a place where all the rappers go and everyone else in the music industry. I was there, documenting the seminar, and when I got the phone call, I heard that they were interested in me shooting their album cover. I said, ‘wow, they’re performing here. So after the show I’ll go and introduce myself and talk to them.’ They had this tape called ‘Protect Ya Neck,’ and ‘Method Man’ was the B-Side. It was just a white tape with a logo, but it was hot on the street. Everyone knew who it was, everyone knew it. But there was no visuals—we’d never seen them—it was just this little white tape.

So the Wu Tang is going to come to the show. There was a group before them, unknown, and all of a sudden you see a brother with a mask and a hoodie step into their show and just post up on the right. The other group would be like, ‘who the fuck is that guy?’ And all of a sudden, another guy with a mask and a hoodie. I’m watching all of this stuff, I don’t know what’s happening. I had never seen the Wu Tang. All of a sudden the whole Killer Bees swarm the stage, grab the dudes, kick them off the stage! They went to the DJ, took the turntables, kicked the DJ out. They went to the sound guy and took him out! All of a sudden ‘Protect Ya Neck’ starts playing. That place went bananas. That was my first experience with the Wu Tang.

So I went and met the RZA after the show. I came to New York and he told me his vision. His vision was to have a monastery, Enter The Dragon, martial arts—think of kung fu movies. I got a location, the Angel Orensanz Foundation. The shoot almost didn’t happen because when I went to shoot, only six guys showed up—not the entire Wu. The RZA was like, ‘yo, if all of my brothers are not here, I’m not doing it.’  I said, ‘why don’t you put on the masks like you did at that [Atlanta] show, and you all come in. You’re the Wu Tang Clan, it’s all for one and one for all. He thought about it for about 15 seconds and then said, ‘alright, fuck it. Let’s do it.’ It almost didn’t happen. 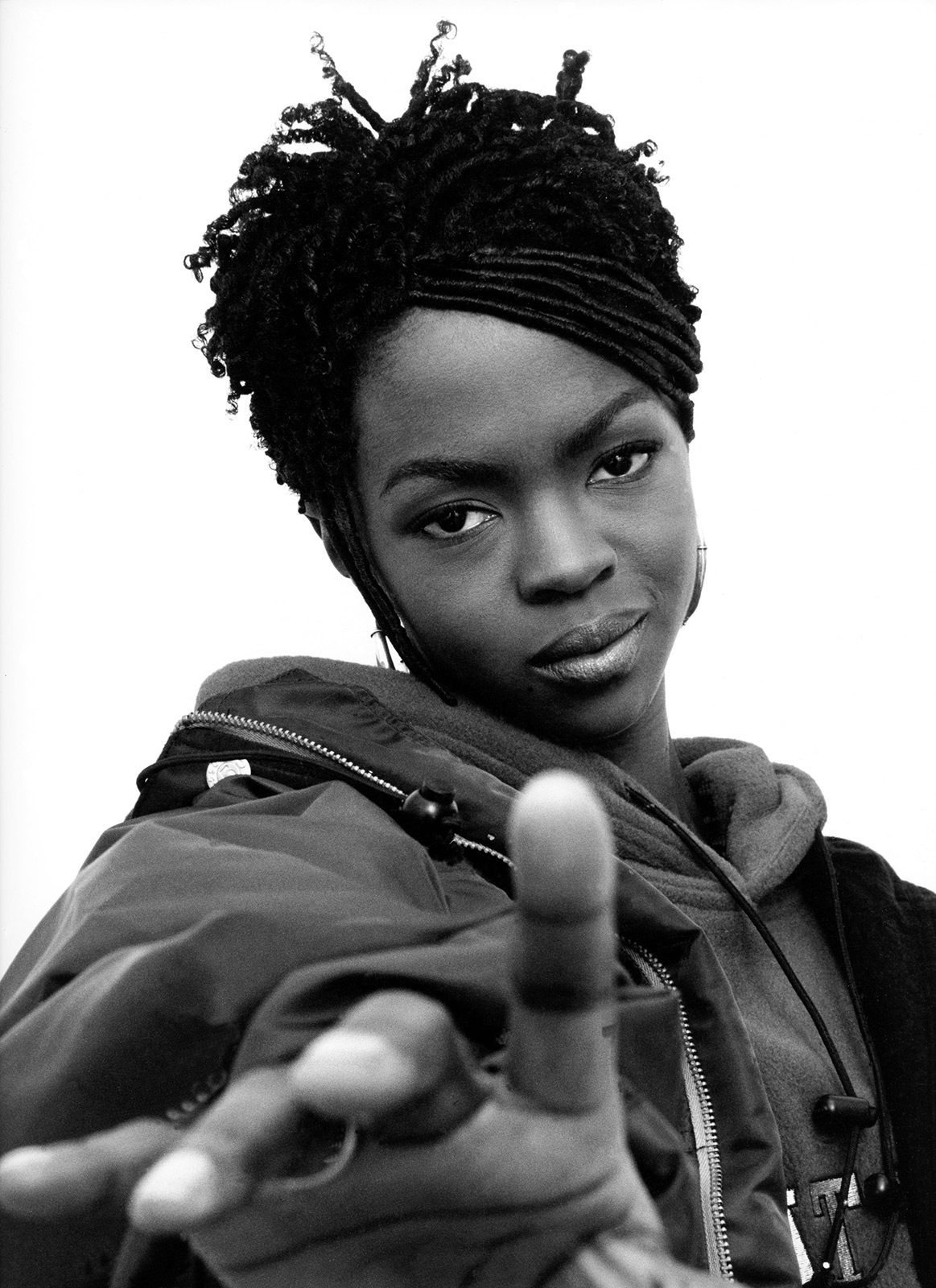 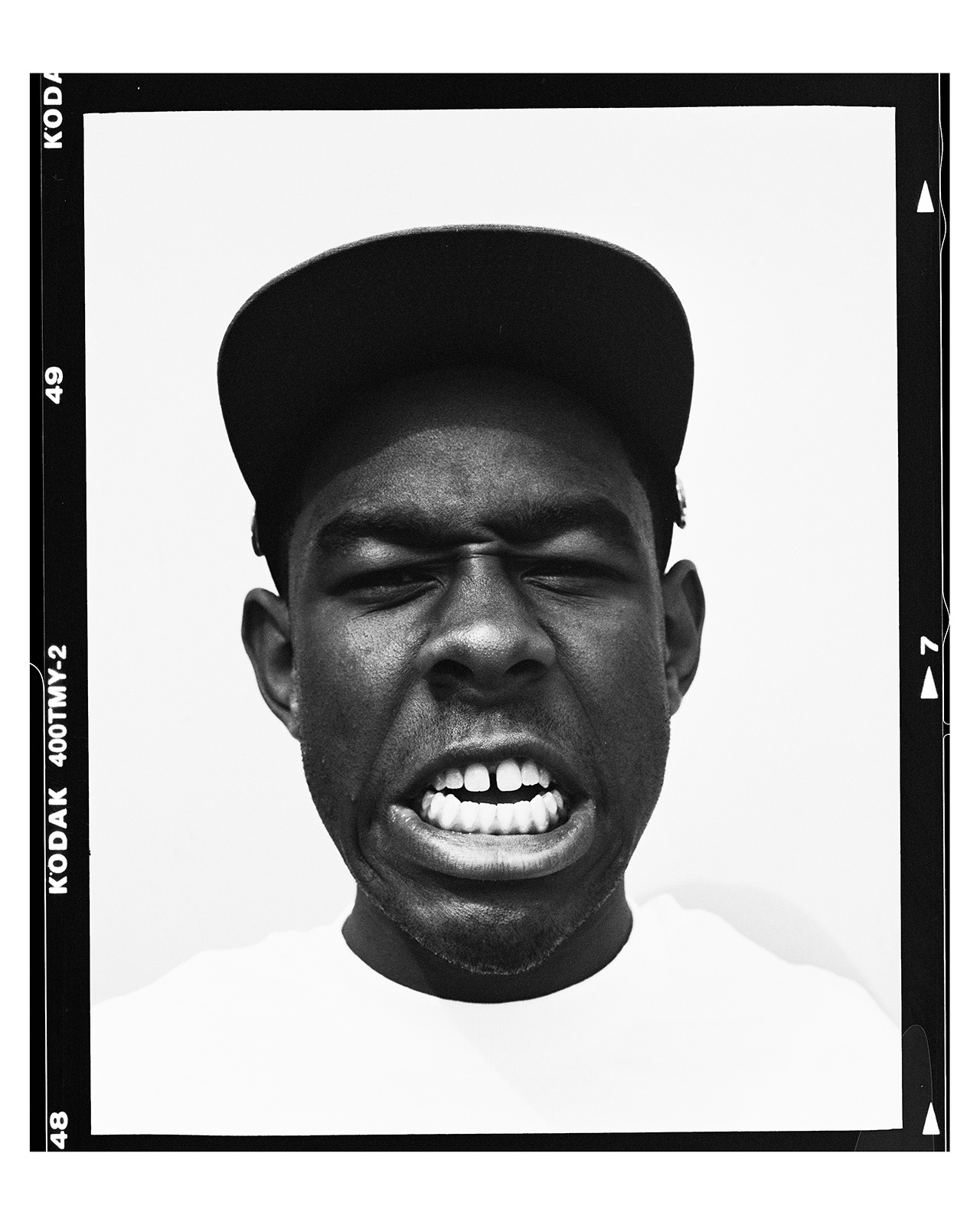 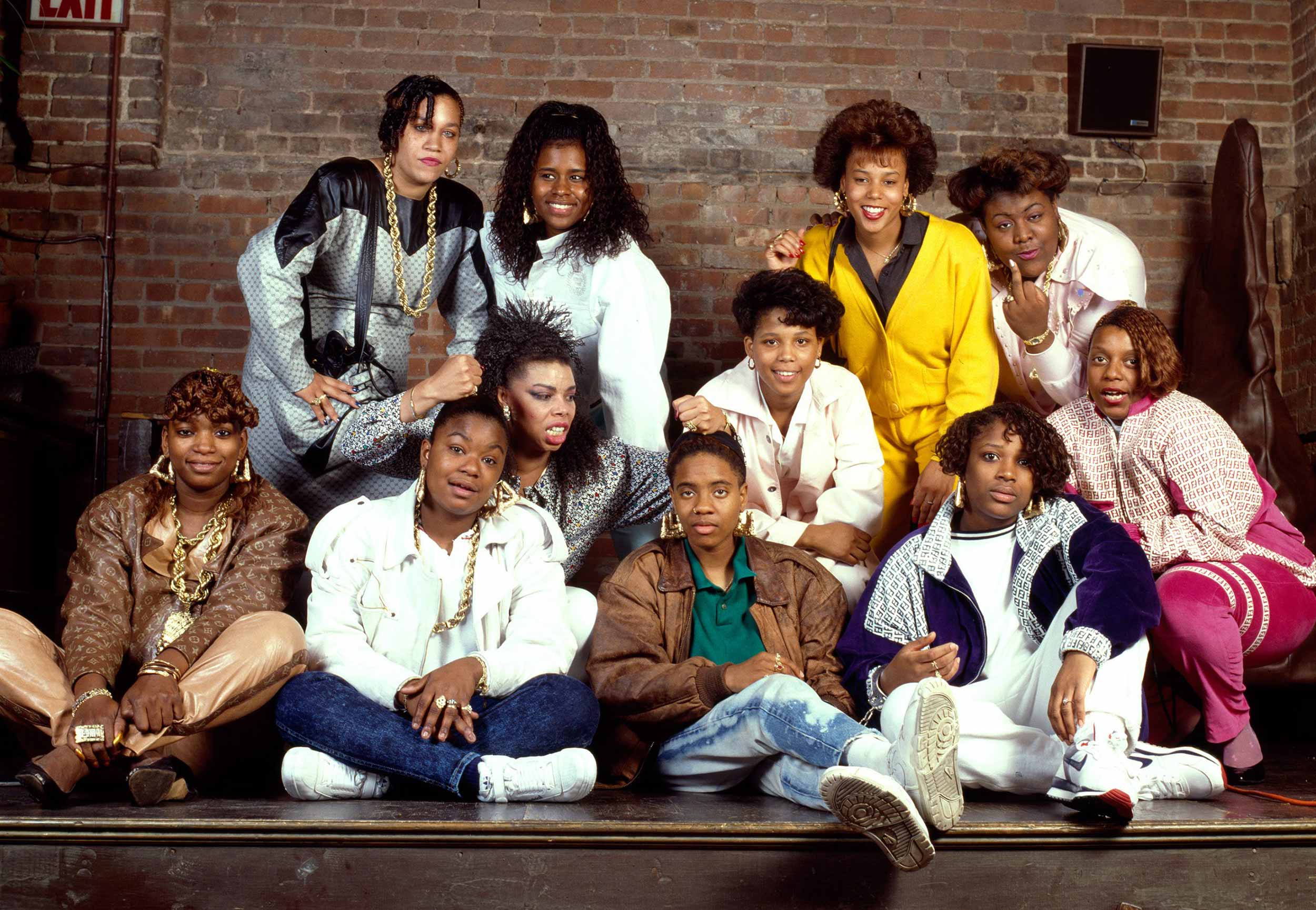 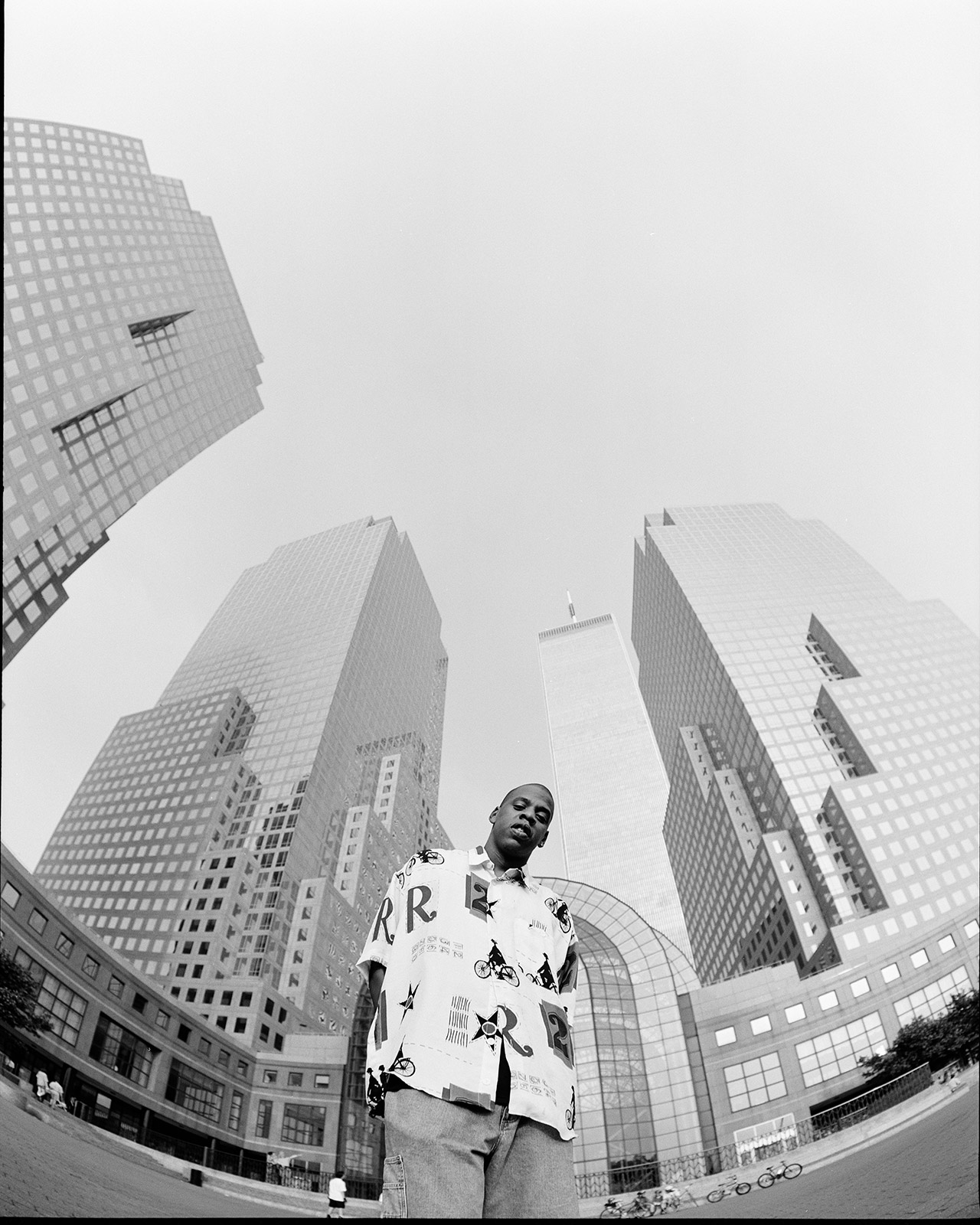 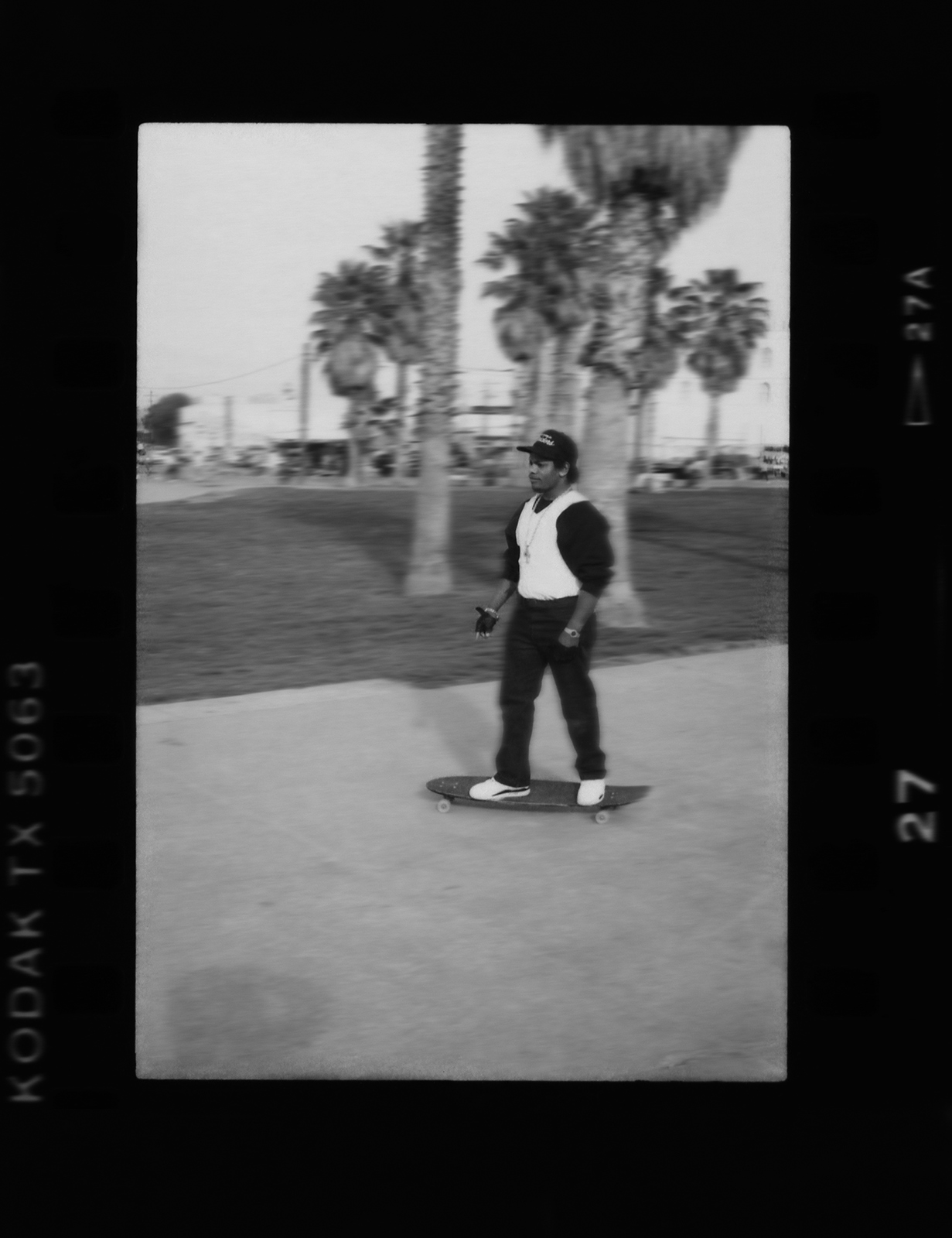 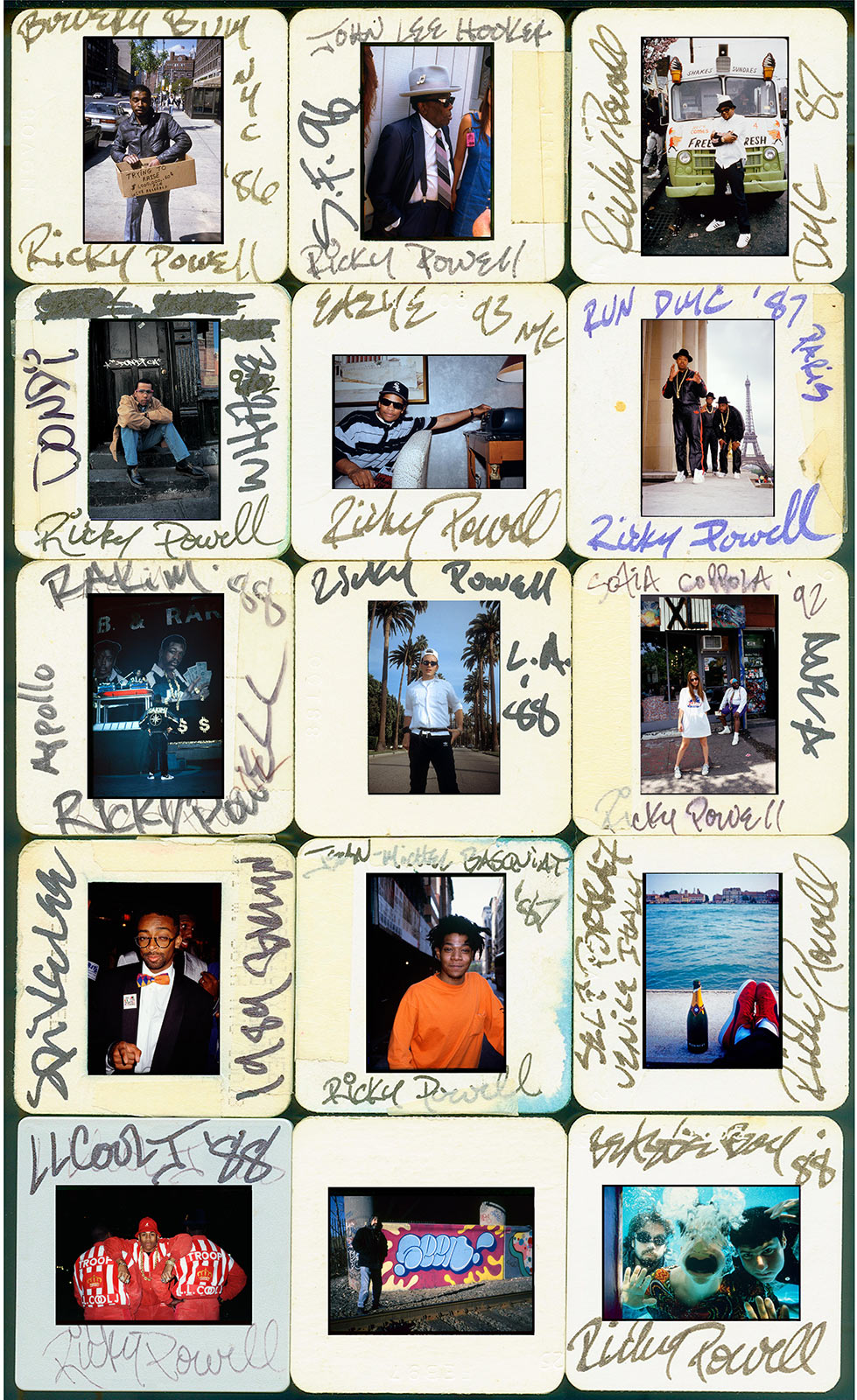