‘Chef just gon’ get your mouth watering’: For Raekwon, retirement’s not on the table

The rap legend spoke to Document about his upcoming project ‘The Appetition’ and why Wu-Tang Clan will never go out of style.

Hip hop is a tumultuous industry. Over the course of the genre’s relatively short history, countless artists have broken into the spotlight, only to quickly fade out of public interest. So, when a rapper like Raekwon manages to preserve mass interest throughout a 25-year career, it’s worth taking notice.

The quick and constant cycling-through of artists happens in part because of how quickly trends switch within rap. In order to survive the ever-changing landscape, artists must find ways to stay relevant. The artists that choose to embrace new trends to maintain a fanbase are often labeled as followers, whereas rappers that hold steadfast in their sound are called rigid and adverse to change. Authenticity plays a large role in Raekwon’s game plan. Whether he’s writing a verse for a Wu-Tang Clan album, crafting one of his solo projects, or contributing a verse for a feature, the second Raekwon’s voice comes through the speakers, listeners know who he is and the quality that can be expected.

Raekwon’s been busier than you’d expect from a rap icon who’s already proven himself countless times. He’s been on a global tour as part of the Wu-Tang Clan’s 25th anniversary, while also preparing for the 25th anniversary of his classic album, Only Built 4 Cuban Linx. He operates a store in Toronto and is the owner of his own wine label, Licataa, “straight from the bushes of Italy.” Retirement isn’t yet on the table. “I’m not fully where I feel like I want to walk away from it. At least I know whenever I want to walk away, I can walk away on my own,” he told me in New York City a week prior to the release of The Appetition, his latest EP in partnership with Red Bull, which released on January 17th.

The Appetition is a taste of what’s to come from The Chef. On the bite-sized treat of an EP, Raekwon linked up with songwriters P. Wright and K-So Jaynes alongside up and coming producers, LordQuest and Twhy Xclusive. Document spoke to Raekwon about his latest EP, Wu Tang Clan’s renaissance and the impact of the godfather of the Clan, Popa Wu.

David Aaron Brake: Tell me a bit about this new project.

Raekwon: I wouldn’t call this a project. I would call it an appetizer. But the name of the project is called The Appetition, appetition really means to serve. The great serving, you know what I mean? So, this is just going to get your palette wet to be able to have a full course meal later on down the line. I was excited about that because I haven’t been in the booth in a couple of months because we’ve been running around. Normally I’m in the booth, like, every other week, creating and just vibing. So being away from that for a minute, I knew it was a force that needed to be dealt with—going to get back up in the studio. Everything happened for a reason, [Red Bull] told me I got 72 hours to create something dope with a team of young producers that’s hungry and got something to prove. I’m like, ‘Well hey, shit, I love listening to new producers do their thing.’ So, you know, got up in the studio with them, hadn’t met these kids ever in my life, but I believed in them because they believed in themselves, and I could just imagine how somebody who’s not really known gets an opportunity to work with a legend, like, ‘Oh shit!’ You know what I mean? That’s like me working before I [was] in the game and getting the opportunity to sit next to Rakim and have him help me, help us.

David: You guys have been on tour, celebrating the 25th anniversary, the Hulu show came out… Wu-Tang never went out of style, but it seems like right now there’s a huge renewed interest, especially among the younger kids. What do you think it is?

Raekwon: I think it’s just that when you think about powerful groups that did something in the culture of music, you can’t forget them, you just want to see what’s up next, and I think that the TV show kind of allowed people to revisit what we did 25 years ago and what we’re still doing. Everybody don’t get a chance to have this kind of run in the business. They used to say, back in the day, an average rapper would only last three or four years. Here it is, we 25 years and still going, still relevant, still touring, still making millions of dollars. Everybody don’t get that kind of platform. So, I think for our fans, and the new fans, is that they recognize the work that we did. Going out on a 25th year anniversary run, with the whole Wu was dope, but then I gotta do it all over again because now it’s [the] 25-year anniversary for Only Built 4 Cuban Linx. For me it’s something that I love to do. This is what I signed up for, this helps me take care of my family, put my kids through school and college, and take care of my moms, and do all of the things that I could do—that’s what it’s all about, man.

David: Where a lot of rap vets will often tie on to the upcoming kids, you only seem to do it when it makes sense, and something that I loved from this year was the Griselda project [WWCD] that you’re a part of.

Raekwon: Everybody’s talking about Griselda, they hot right now! What’s so crazy is that I already seen ’em. So it makes me proud that people are already paying attention to them because they workin’ and they bringing back a moment that we had back then—they’re rejuvenating it. Griselda is doing what we do, what we did, and they’re doing it in the same footsteps. For me to have an opportunity to be around these guys—these are my younger brothers. When I see them, it ain’t like I just met them, I know them now. We have a relationship. It’s love. For me to see that people was acknowledging them. It makes me feel good because they really represent that hip hop that made all of this relevant. They’re not worried about radio time, they’re not worried about being the hottest rapper. They’re just representing the culture the way it once was. I love those guys. They told me the first day I met ‘em, ‘You know we’re y’all all over again.’ I said, ‘Absolutely.’ It’s like when somebody told me and Ghost, ‘Y’all are EPMD.’ That’s how we wanted people to feel—we coming after them. I love EPMD, that’s one of my favorite duos of all time! For Griselda to look at me, Ghost, and the whole Wu like that, it’s a blessing. They’re keeping that street hip hop where it’s supposed to be at.

Raekwon: Popa Wu was like a father that we never had. He was the Older God, somebody that was always filled with tons of knowledge. He was from the streets of course, streets of Fort Greene, Brooklyn, he had a big family. RZA and them were his first cousins. Dirty and Popa Wu was inseparable. They always was together. Popa Wu, I shared a certain kind of experience with him too, because he was on my two classics, Only Built 4 Cuban Linx, the first one and then second one. I miss him, but he was a General and he wasn’t scared of anything. He wasn’t scared of death, he was just a man’s man. I’d never seen a 65-year-old man get on the floor and do 50 push ups. He’d do 50 push ups in front of us. He was going to keep going, we was like, ‘Nah man, stop, stop, you’re too old!’ We was laughing but he was still ready to go. What he taught the Wu was how to be self-preserved and believe that anything you want to do can happen. He definitely will be missed but never forgotten.

David: What are you most excited for fans to hear on The Appetition?

Raekwon: Just to start 2020 off with some new music from The Chef. This is just an appetizer. This is just something to get your mouth watering like Meth said on Enter the 36 Chambers, ‘Chef just gon’ get your mouth watering.’ That’s what we’re doing right now with this project and in a couple of months from now I’ll be dropping the full-fledged masterpiece of what it’s going to be. 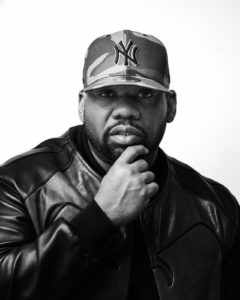