Our favorite ‘Taurus-Gemini’ on how the creative hotbed of West London helped her find her singular sound.

Since the 1990s, when a sprawl of young British artists and designers like Tracey Emin and Gareth Pugh­­ set up studios in London’s East End, the most coveted postcodes for creatives in the city have begun with an E–for East London. But in the past couple of years, on the other side of the city, a different type of creative energy has been brewing. The city’s summer hit, “Ladbroke Grove” by AJ Tracey, is named after the neighborhood of West London and where Tracey grew up.

Rapper Lava La Rue calls Ladbroke Grove the “heart of West London.” Real name Ava Laurel, La Rue has spent time all over the city but she’ll always call Ladbroke Grove home. A rising star of a new series of producers, rappers, and designers from the area, she credits the scene as a collective effort. “I feel like there’s an underground scene coming out of West London at the moment,” she tells me. “I don’t know what to call it; it’s garage, it’s trap, it’s the sounds of kids who have been left to their own devices and have just chosen to collaborate with their friends.”

Combining the ethos of punk with the hustle mentality of ‘90s hip hop, La Rue has been bridging differences for as long as she can remember. I ask her to describe her energy and La Rue laughs: “I’m a Taurus Gemini,” she says. “Look up my chart and decide for yourself.” Her music blends the dreamlike quality of lo-fi hip hop with the production levels of crisp R&B. Her recent track “Twenny Four” has the infectious chorus of a playground chant with gritty lyrics; an effective calm earworm overlaid with a grown-up sentiment. 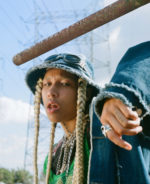 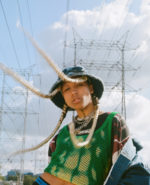 With Notting Hill on one side and Kensal Green on the other, Ladbroke Grove is a thread between two ends of the social spectrum, sandwiched between two worlds—Grenfell Tower on the one side, the pastel-colored terraces of Portobello Road on the other. “I grew up on a council estate, but my friends would school would live in a semi-detached. I went to a school with all kinds of kids. It’s such a mixture. High rise flats stand back to back with a house you’d see in a rom-com from the ‘90s.”

For some, that tension is a clear recipe for strife, but La Rue says it helped her embrace the best of both worlds: “I think the summer holidays is when people come into their own. I’d go into every new school year hearing about all these kids doing such different things and be like, wow, I want to do all of that.”

La Rue credits the area for exposing her to different lifestyles, cultures, and communities: “What makes that place amazing is the first-generation Caribbean migrants which came to the area. I’m from that. A lot of modern London subcultures that we have today, come from these communities–rave culture, sound system culture.”

She describes the Jamaican side of her family as “inherently musical.” “Even if it’s a birthday or going to church on a Sunday or something more obvious like Carnival, that reggae, soul and Rocksteady influence was there.” She conjures up those scenes in her lyrics, like the song “Widdit”: “All white trackies it’s a christening/Snare so heavy it’ll leave ya fingers tinglin.”

Rapping about what she describes as growing pains: living in a confusing city, navigating her sexuality and gender and being a woman of color, La Rue’s lyrics describe a family life that wasn’t always tranquil. At 12 she was in foster care staying in different places until 18: “I ran away from foster care at 15 and was like ‘fuck adults, fuck foster care, I’m doing my own thing’ and got a job. But at around 17 I learned to embrace that, and if people aren’t down with it, they’re not the best energy to be around.” 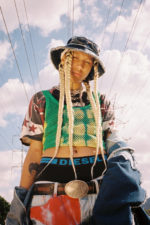 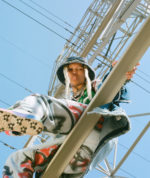 Two years before that revelation, La Rue began studying music: “I started making poetry and playing it over these hip hop tracks. Then I started collaborating with these sick producers and Lava La Rue was born.” It was at that point she began actively cultivating the type of people around her. “That’s when I started my arts collective NiNE8,” she explains. “You have to grow up fast if you want to be creative.”

Aside from being a fortress of support and shared interests, La Rue describes NiNE8 as a form of creative bartering. “We all used our cultural currency: You model for my album cover; I’ll produce some work for you.” That approach has been described as DIY, raw, and vibrant, but La Rue says if it was up to her, the acronym would be DIT. “Do it together,” she giggles. “It’s about collaboration. Compromise creates beautiful unknown outcomes that can be so much better than what you imagined in the first place.”

DIY is intrinsically punk, but La Rue’s ethos doesn’t share punk’s nihilistic mindset. She says the most anti-establishment thing you can do is love yourself. “I’ve always wanted to leave a positive mark on my community,” La Rue replies when I ask how her friends would describe her. “I always think about the bigger picture, and it helps me move forward and working towards something—but then I am a bit of a workaholic.” 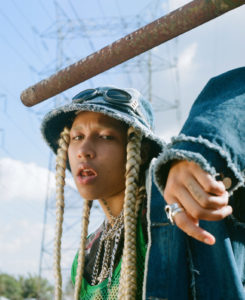 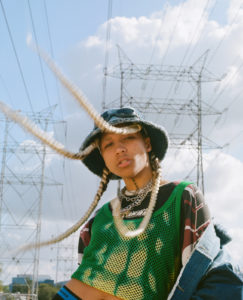 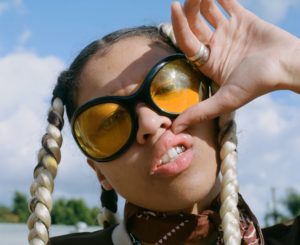 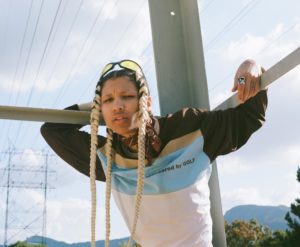 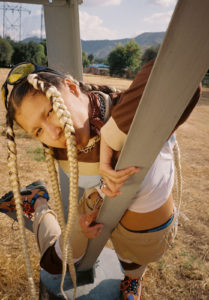 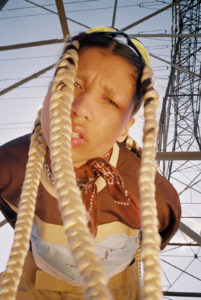 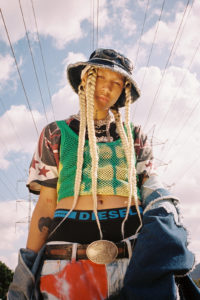 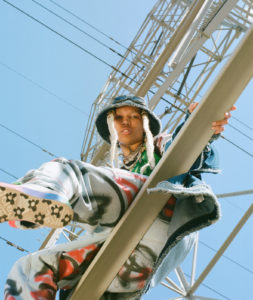 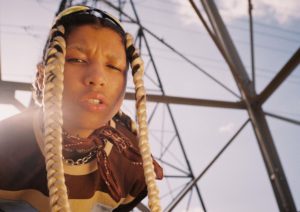