Byronesque in collaboration with Farfetch, has reissued 11 key Montana looks under the direction of designer Gareth Pugh.

Claude Montana defined an era of high-impact fashion. The iconic French designer’s outsized silhouettes, deft tailoring, and sculptural use of leather gave birth to the look we all associate with the 1980s—one of power, decadence, and drama. Between the mid 1970s and the late ’90s, Montana set the pace of Paris fashion, delivering extreme looks, megawatt shows, and even working with celebrities like Cher. However, he was maniacal when it came to design, and no matter how grand the dream he delivered seemed, he could always back it up with garments that were impeccably crafted, tailored, and embellished.

The modern fashion industry could use more of that, which is precisely the thinking behind “Montana: The Reissue,” the latest project from contemporary vintage platform Byronesque. In collaboration with Farfetch, Byronesque has reissued 11 key Montana looks dating from 1979 to 1994, the production of which was overseen by designer Gareth Pugh, who ensured that each piece was authentic to Montana’s original vision. “There is a strong sense of discipline in Montana’s work—he was a renowned perfectionist—and the structure, the volume, and the almost architectural rigor is something I really appreciate,” said Pugh, whose own designs echo the construction and theater of Montana’s. “I’m a Virgo, so I’m a bit of a perfectionist myself. Getting the details right for this collection was really important to us—from the embroidery and shoulders, down to the small studs and toggles. Even the topstitching—every element was scrutinized.  I was acutely aware of the responsibility I had to deliver something that was true to the original.” Ranging in price from $213 (for a t-shirt) to $4,032 (for an embroidered leather dress), the collection is available now on Farfetch.com.

“One of our ambitions at Byronesque is to reissue the archives of dormant collections—putting great design back into the world that isn’t there anymore,” said Gill Linton, Byronesque’s CEO and editor-in-chief. “What we are finding from our younger audience is that they’re looking for quality things with stories behind them,” she added. “This collection is like a love letter to Montana from Byronesque. He was the biggest-selling designer of that era, and we want to get him back on the map.”

After his house shuttered in 1997 due to bankruptcy, Montana, who still lives in Paris, fell off fashion’s radar, becoming notoriously elusive. However, his influence endures. The likes of the late Alexander McQueen, Riccardo Tisci, and Olivier Theyskens have all cited Montana as inspiration, and just last season, Marc Jacobs paid tribute to the designer, sending a collection filled with giant shoulders, razor-sharp suits, and wide-brimmed hats (designed by Stephen Jones, who also worked with Montana) down the runway. “Pretty much every designer has been inspired by him,” said Linton. “Just look at the past two seasons—his influence is everywhere. You could mix these [reeditions] amongst some major luxury brands today and they would fit in perfectly.”

Indeed, Montana’s designs have retained a certain modernity. And while the capsule looks (like Montana’s famed, 1979 eagle-embroidered leather dress; a hooded, puffy, purple parka; and a black leather flight suit that you might have seen Alicia Keys wearing at the Grammys on February 10) do nod to the era from which they came, they also fit right into the in-your-face fashion climate created by the likes of Demna Gvasalia and Alessandro Michele.

“I’ve always been drawn to Montana,” said Pugh, who first discovered Montana’s designs in the library of Central Saint Martins, where he was a student. “His work challenged convention and managed to equate power and seduction. I feel Montana never fetishized women—he celebrated them, and this is key, especially today.”

All images courtesy of FarFetch.

When asked what the new generation of fashion obsessives need to know about Montana, Pugh offered, “His legacy is one of aspiration and dreaming. I’m naturally drawn to fashion that serves as a counterpoint to reality—something that is aspirational or offers fantasy and escape. This is something I think we all need a little of in the world in which we live today—the power of dreaming!” Below, Linton discusses some of her favorite looks in the collection, and reveals how she and Pugh brought the Montana dream back to life.

“The L’Officiel shoot for this is a popular image amongst Montana aficionados. Back then, editors were only interested in shooting the full Montana look, not for ad money, but because it was so epic. This dress has been a particular labor of love, taking 110 hours of hand-beading per dress to recreate the same total look as the original. And the hood is very 2019.”

“This is one of the most iconic images of early Montana. This dress is in the archives of the most important fashion museums. We sourced the sleeveless version and found the factory with the same machine to recreate the Eagle exactly. It was a goosebump moment when the toile sleeve went on. This dress is all party at the front and the back—it was rarely photographed from the back, which reveals a deep-v wrap dress.”

“This is like a magic cape. Doesn’t matter what you wear it with, it’s transformative—visually and emotionally. We spent weeks color-matching to honor Montana’s intense and very specific colorways.”

“I wasn’t sure how this one-piece would turn out and it became one of my favorites. It’s like ‘90s hip-hop is back, and how great is that?”

“Montana may have been dormant for a while, but the logo is still one of the most iconic in fashion history. I’m happy this is back at a time when Helvetica has taken over the fashion world. Montana created the empowered woman in the ’80s, ‘in his own French accent’ as Sarah Mower puts it in the homage film we made with Nowness. Gareth nailed it with this T-shirt design.” 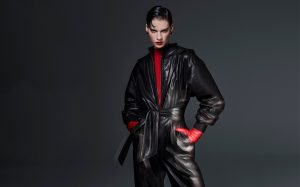 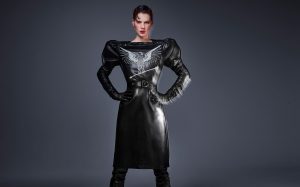