Photographer Janette Beckman looks back the mods, punks, and ska kids who stuck it to the man before callouts were cool.

During the economic downturn of ‘70s London, Janette Beckman was a photography teacher living in what she calls a “semi squat” as she witnessed the city’s youth culture reach a new turning point. With what seemed like a bleak future ahead, mods, skins, and punks emerged on the streets of London. Working-class kids were speaking out in numbers, launching a youthful rebellion against the Queen and the government. Beckman saw it all, carefully documenting the birth of London’s punk rock scene for magazines like The Face and Melody Maker, while shooting album covers for bands like The Police. Beckman captured the mohawks, the studded leather motorcycle jackets, and the youthful angst that went with them until she decamped for New York in 1983 to photograph the music genre emerging from the Bronx called hip-hop. Beckman released a new printing of her book Raw Punk Streets UK 1979–1982 this summer. The photographer, who is now represented by Fahey/Klein Gallery, looks back at some of her most seminal images with Document, describing each moment she caught on film, from the 1979 memorial of Sex Pistols bassist Sid Vicious after his tragic overdose to people hanging out at the legendary store BOY on Kings Road. 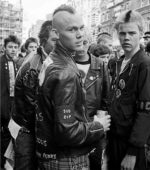 “In February 1980 over 1000 punks, mods, and skinheads marched from Sloane Square to Hyde Park to commemorate Sid Vicious’s death the year before. I was covering the event for Melody Maker. All the punks had turned out in their finest gear to honor Sid. People were wearing black armbands and there was a general air of…perhaps punk was on the wain as the Sex Pistols were no more.”

“These young kids were at a festival in Coventry, in 1980 waiting for The Specials to go on. They are wearing their best Harrington Jackets and trainers. Mod style and lots of attitude.” 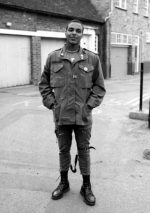 “[It was] unusual to see a black punk in Coventry 1980. I stopped him and asked to take a photo. The bondage trousers, boots, and jacket are perfect.”

“Two skinheads on the street in Coventry. One on the left in a Harrington jacket and [one] on the right wearing a classic Crombie coat. The 2 Tone ska pin says they were probably there to see The Specials, who were playing later that day.”

“I met these Ska girls hanging out on a bench. I asked them to pose for me and they immediately did this stance—echoing The Madness’s album cover for One Step Beyond. Obviously huge ska, 2 Tone fans, they are perfectly styled with suspenders, the right jeans, and Fred Perry shirts.” 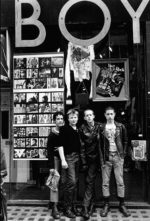 “BOY was a famous store on Kings Road. Don Letts used to DJ there on a Saturday. It was a real hangout. I loved the styling of these four young punks—the boots, the androgynous look, the attitude. Years later they got in touch with me through social media and I sent them a print. We keep up, they are still living the ‘life.” 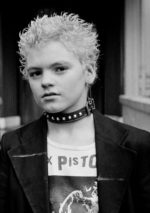 “Young punk girl—[she’s] so beautiful in her Sex Pistols shirt, dog collar, safety pin earring, and the look in her eyes. This was shot at the Sid Vicious memorial march.”

“Every Saturday afternoon, punks and skins would hang out on Kings Road on these particular benches by the town hall, drinking beer, sometimes shouting at the passers-by. Years before street style became a thing, punks, skins, mods, and rockabilly kids would parade up and down Kings Road on a Saturday in spiked hair, Doc Martens, acid wash jeans. Maybe they would pop into Vivienne Westwood’s shop to nick a t-shirt.”

“From the Sid memorial march. I was documenting the event for Melody Maker, a weekly music paper, just walking through the crowd looking to capture that spirit of the youthful tribes of the time.”

“China Doll painting, hand-done on the back of his jacket to honor Sid. The swastika, the Anarchy sign just right. And his friend with the padlock and chain and badges. The march was an enormous outpouring for the loss of Sid, he was an iconic figure in the punk world and his death meant the end of the Pistols and, to a certain extent, punk as we knew it.”

“I photographed these two girls in Hyde Park—love their style. So punk, the kilt, The Clash t-shirt, maybe her mom’s sweater repurposed under a school blazer, great eye makeup and hair gelled to perfection. Back in the punk days, no one had money, kids were buying clothes in jumble sales, army surplus stores, raiding their mom’s closet, cutting up old clothes to make them new. There were no stylists, it was before the internet. To me, one of the great things about punk was there were no rules, you did not have to be a size six model type. You could be who you were and look great.”

“This photo says so much about Sid, and the don’t-give-a-fuck attitude. ‘Belsen Was a Gas’ is a song supposedly written by Sid Vicious—designed to offend the older generation, which it did. John Lydon later said, ‘[the song] was a very nasty, silly little thing…that should have ended up on the cutting room floor.’” 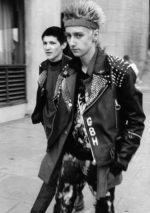 “Two punks on the street. GBH stands for Grievous Bodily Harm, it was the name of a band formed in 1978.” 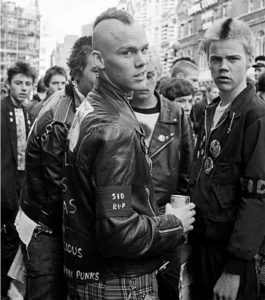 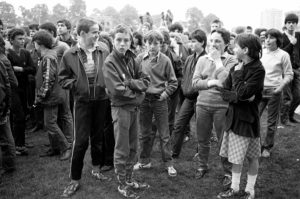 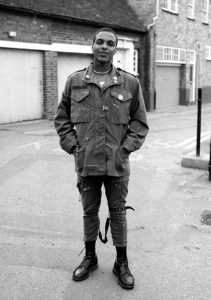 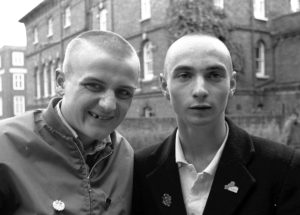 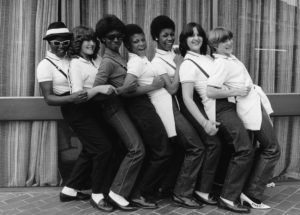 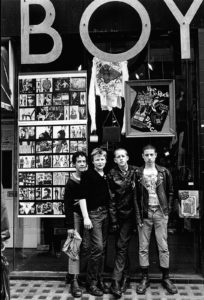 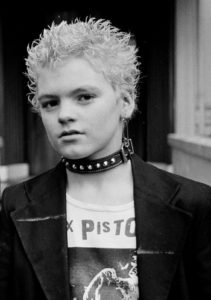 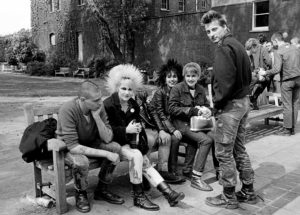 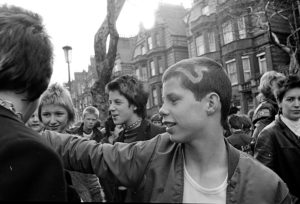 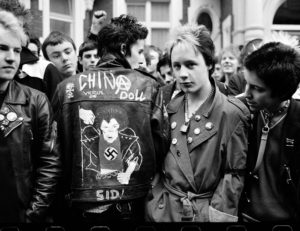 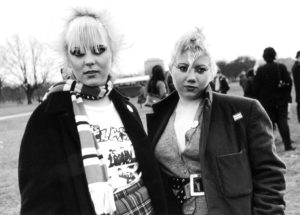 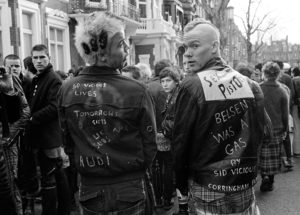 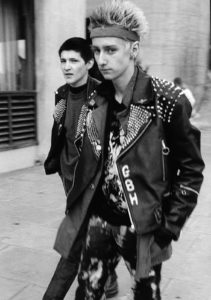