On the heels of winning the $100,000 Nomura Emerging Artist Award, Cheng Ran tells Document how he stays on the cutting edge in today's globalized art market

When the Hangzhou-based artist Cheng Ran embarked on an art career at the China Academy of Art, he dropped out of painting two years in. The artist Yang Fudong changed Cheng’s course after casting him in his five-part film Seven Intellectuals in a Bamboo Forest (2003–07). Through the experience, Cheng realized that film was art, and he worked under Yang to learn the craft. He bought a small, cheap second-hand camera on online retailer Taobao and began making his own films that captured Chinese youth culture and angst. In 2016, he completed a three-month residency at the New Museum in New York that resulted in his trilogy, Diary of a Madman. This June, the artist presented a collaborative performance with DJ Shao Yanpeng at the Sydney Opera House, and he was recently named one of two recipients of a $100,000 prize for the inaugural Nomura Emerging Artist Awards. Document sat with Cheng to discuss his experience in New York, the state of contemporary art in China, and why he’s so attracted to the underground.

Ann Binlot—You did a three-month residency at the New Museum. What was it like to be in New York?

Ann—When you were growing up in China, where did you see New York in pop culture, and how did it compare to your actual experience there?

Ran—My favorite TV drama in China is about one really famous musician in the ՚90s. He has really big dreams to play solo somewhere, but when he arrives in New York, it’s totally different than he imagined. There is no place for him. He has to wash dishes to keep alive, living in a basement, so his dream is totally broken, and he becomes a worker. After a few years he becomes a very successful businessman. Famous words [in] TV drama: If you love someone, you send him to New York because it’s heaven. If you hate someone, you send them to New York because it’s hell.

Ann—Was it heaven or hell for you?

Ann—What do people think about video art in Asia?

Ran—[Young people now] are ready collectors; they are willing to cheer for video art. Young artists always want new media. So [finding an audience] not a problem. During the time I start to work in China, around 2003, it was only the beginning of new media and video art, so not so many people and also no markets, no museums, no galleries.

Ann—You presented Miraculous Trajectories at the Sydney Opera House last month with DJ Shao Yanpeng; tell me about what it’s like when you collaborate with artists of different mediums. Tell me about this film and how you guys came together.

Ran—I have worked with many different kinds of music: electronic music, also some band music, like post-rock, funk, and experimental music. So I always found different ideas through the different music styles and put them into the different work. Also, I travel to different places, for example, New York, Paris. I always find local people to collaborate for something.

Shao Yanpeng is a really famous DJ, and he has been working with many different people for the live music, also sound art. This time, the way we worked was I made the film, a silent film, and he put the soundtrack with a performance at the same time. It’s like the old generation silent movies.

Ran—I do different projects different ways. Sometimes, if I know some sound art or music already, I can take inspiration from this music and create artwork later. Sometimes I may work [on two things] together at the same time.

Ann—Have you faced any challenges as an Asian artist?

Ran—Not really. An artist is just an artist and [not] about Asia, or Europe. Unfortunately people [don’t] always see that way. For me, I didn’t think that I’m an Asian artist. For young artists, they don’t think they are Asian artists. They are working, studying internationally, so they go everywhere. It’s not a problem for me. I also try to break this wall.

Ann—When you were in the United States did you feel that identity was more evident there?

Ran—Not really, because this city is all people from all over the world coming together. Nobody is originally from New York. That makes me feel good. The people, they don’t really care about nationality, identity mixing. Totally mixing language, culture, sharing—that’s good.

Ann—Do you feel, as a Chinese artist, that it’s your responsibility to set the record straight about Chinese culture?

Ran—Yes, but you don’t need to show Chairman Mao in your work. Everything I did, the video, the feeling is already from Asia. For example, I was in Amsterdam. And what I saw, I knew that’s from Asia. Even if they’re making sculpture or abstract painting, because it’s already in the process. You don’t need to push more.

Ann—You said you’re more drawn to the underground. What about it excites you? Why are you interested in these stories?

Ran—When I started with video for my medium, underground was more experimental, but after a few years, it has become popular everywhere…The video is not the newest anymore, so [the question is] how to keep the idea fresh to discover the artwork. I will try to think this way to use another medium, to work with people and performance, and also, I’m having an artist space in my city to support young artists because China’s art market is quite strong. 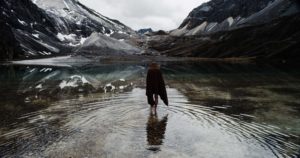