Following her artist portfolio in Document S/S 2019, Winant speaks on the physical intimacy of her art practice, and bringing thousands of vaginas to MoMA.

Intimacy through careful touch, consideration, and understanding is at the core of Carmen Winant’s practice. The Ohio-based artist primarily works with appropriated photographic imagery to create collages and installations that seek to challenge limited perceptions of womanhood, granting legitimacy and power to the endless scope of their experiences—women in protest, women in testimony, and women in birth. This refusal to go unseen extends beyond Winant’s artistic work and into her personal life. With multiple international group shows, a MoMa exhibition, a Guggenheim Fellowship in Photography award, and two artist books under her belt, Winant is blazing a bright trail in the art scene—all while holding a university teaching position and being a mother to two young children. Winant’s work captivates as a reminder of the ways our troubled past has trickled into our still-troubling present, stirring us to reconcile our own outdated notions of representation. Document caught up with Winant to discuss how she is re-imagining the image to open windows for women to be seen and justly heard.

Kaylee Warren—This is actually a full circle conversation for me. You’re represented by Fabiola [Alondra] and Jane [Harmon] over at Fortnight Institute, and I used to work for them a few years ago.

Carmen—I know, I love them to death. I feel like every experience I’ve had showing with other people, it makes me just never want to leave [Fabiola and Jane] because they’re so great to work with.

Kaylee—They really are. I helped out at the 2017 VOLTA fair where they were showing your work “What Would You Do If You Weren’t Afraid (Women in the News Before November 8, 2016)” and was part of the install process for “Anita Hill Was Telling The Truth.” They were such great projects, to be able to see the way you approach the precarity of how women get represented in the media by interrogating who gets pictured and why.

Carmen—Wow, I really appreciate that. It’s really nice to be talking with someone who has personal experience with the work. It means a lot.

Kaylee—In “You make me feel so,” the work you created for Document’s S/S 2019 issue, you placed an emphasis on a certain physicality that you employ with your artmaking, particularly the sense of touch. How does this tactile component engage with the messages and themes you strive to get across through your work?

Carmen— [“You make me feel so”] was actually inspired by my work “61 Minutes in Heaven” that I made right when I got out of graduate school. I had made a whole body of work about Linda Lovelace, the star of Deepthroat, the first feature-length pornographic film. [Lovelace] was a really interesting and tragic figure who came to represent all sides of feminism and anti-feminism. I had been saving centerfolds of her, which in this case, were two Playboy magazines around the time of Deepthroat’s release in 1972. I kept touching them, massaging them with my fingers for the length of time that the film was, which was 61 minutes. The more intimacy I pressed upon it only erased her image further and further. [For Document], I immediately thought of these Playboys. They reminded me of that Linda Lovelace project, and I thought, ‘What would it look like and feel like to reimagine that strategy?’ So I wore away at these sheets of paper, which all depict nude women or semi-nude women, only stopping when the image totally began to fall apart under my touch. 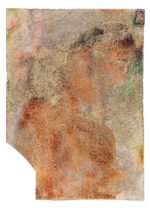 Kaylee—That quality of intimacy that you employ in terms of process really resonates for me with your piece “My Birth,” which exhibited at MoMa in 2018. For a pretty radical display of thousands of images of women giving birth, were you nervous at all to exhibit the work there?

Carmen—Yeah. [Laughs] I was definitely nervous. I had never shown in the MoMa before. There’s some jitters about showing your work in that space and how it will be received and how it will interact with the rest of the show. In this case, I was [showing] literally thousands of images of vaginas spread open with blood coming out of them. It was kind of scary! I had been working with it for a long time in the studio, so I wasn’t desensitized to it, but I certainly had a comfort level with it that maybe a lot of people didn’t have. It was only when we started installing that I said, ‘Oh, fuck. There’s something frightening about this and really vulnerable.’

Kaylee—Were you a mother at the time, while this was showing at MoMa?

Carmen—I have two children; I was already a mother to an almost-two year old, and I was pregnant the entire time that I was working on that piece, which was really a trip. As I was preparing myself to give birth again, it started to become too much for me to bear. I had already gone through the experience of birth, so in many ways, it was the point of departure for the piece. To be working on it while preparing to give birth again was really sort of unusual.

Kaylee—How has becoming a mother affected your work as an artist?

Carmen—It’s hard to locate a part of me that hasn’t been touched [by becoming a mother]. There’s a logistical and administrative kind of aspect to it which is how my time functions. I have a full time teaching job, so working in the studio is not really feasible in the way that it was before. I have to come up with new ways of literally functioning as an artist. And then, in a deeper way, it’s all a part of the project, in ways that are more visible—making work about birth, for instance—and also ways that are maybe less visible in how I think of qualities of boredom or repetition or duration or closeness. Those things which are already a part of my work have just really been deepened. My life as a mother is so demanding and changes the way that I relate to being a person in the world—being a person who takes care of other people, being a feminist, living in my own body.

Kaylee—You exhibited a work recently at Scotiabank CONTACT Photography Festival with “XYZ-SOB-ABC,” a collection of 26 billboards, which you collected for over a decade, showing women in protest. There’s something about your work that feels so timely yet incredibly timeless. 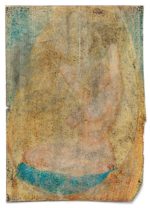 All works © Carmen Winant. Courtesy of the artist and Fortnight Institute.

Carmen—Yeah, the billboards are spread across Canada…

Carmen—The whole country [laughs]. There’s 26 that are spread out in Hungary, Halifax, Vancouver, Toronto, and on. I had been collecting images of women in signage—women in the act of protest, women making external their struggle and their wants through language on a sign. When I got this invitation I thought it would be interesting to craft into the photos so that there isn’t this larger context provided. Instead, there’s just a word like “freedom” or “sisters” or “huegla,” which is “strike” in Spanish, or one of them that just says “I’m drowning.” Here, they act together as a whole image. Part of the reason why there’s 26 of them is because I was thinking of them as an alphabet that adds up to a language.

Kaylee—I understand that you also have a second book, Notes on Fundamental Joy, coming out soon with Printed Matter. Can you tell us a bit about what to expect?

Carmen—[The book features] sourced photos of women living on lesbian separatist communes in the ‘70s. [They are] women who moved away from society, and in some cases their families, to build these new worlds. They did workshops, they built photo studios, they made pictures, and as a result, there’s these amazing archives that exist of women living in a world outside of men. They’re in the woods teaching themselves how to build buildings and create irrigation systems and grow food. There’s something really utopic about it. Of course, it’s also exclusionary and what we would now say is essentialism, but when I came into these photos, I was so amazed by them…It’s a curious process as someone who identifies as cisgender and heterosexual and a mother with two sons. To lay a certain claim to this history is complicated. It’s something I contend with in my text [for the book].

Kaylee—Even in acknowledging aspects of your own identity, the subject is at the forefront of your mind. Only recently does it feel like this is something artists are expected to consider.

Carmen—Right, it’s an important conversation. Sometimes I also think it gets in the way, frankly, or it’s too conservative. For me, art is about working to bridge the gap towards that which I don’t understand or haven’t experienced, not just accounting for the little corner that I have. But, how does one do that in a way that doesn’t hurt people? That doesn’t tread on them and honors their experience, their pain, and, in this case, their oppression? It’s a question I think we often walk on eggshells around, and I am interested in having that conversation out loud. 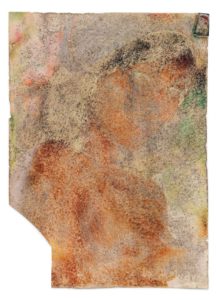 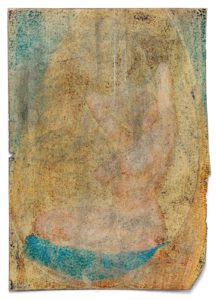