Good times and doing good at Future Design—where sustainable living stems from a harmonious relationship with the natural ecosystem.

A beachfront destination in the luxury resort town of Seminyak, Bali is foretelling the future of sustainable design, bringing together unsung local heroes and designers of international esteem, all exploring design as a vehicle for social and environmental change. Bali’s inaugural Future Design Week—a program of exhibitions, parties, talks, and workshops—took place in May to showcase “what design can do to create a better future.” Organized by Potato Head, the Indonesian lifestyle group known for Potato Head Beach Club with its Instagram-friendly infinity pool bar. Future Design week grew organically out of the company’s network of existing creatives.

The people of Bali have traditionally had a harmonious relationship with their natural ecosystem. The sustainable water management system called ‘subak’ dates back to the 9th century. But coastal communities around the world are nevertheless now caught between two impossible choices, as superpowers fail to meet (and some actively thwart) international climate guidelines: evacuate or elevate. (Back in 2007, it was suggested that Indonesian islands would soon be wiped off the map and estimated that Bali’s international airport would be flooded with seawater by 2035.)

In the village of Potato Head, yesterday’s mantra, “take only pictures, leave only footprints,” is insufficient, and sustainable practices are the only way forward. The hands of local people quite literally uphold Potato Head’s sustainably designed Katamama Hotel—constructed with 1.8 million bricks hand-pressed by local craftspeople. The beach club is clad with thousands of recycled Javanese window shutters, while menus are made from recycled truck tyres.

For a venture of Potato Head’s scale, it’s impressive that the hospitality brand is the first in Indonesia to receive a carbon neutral certification from the United Nations Climate Neutral Now initiative. This was no easy feat, according to Potato Head’s creative director Dan Mitchell. “We spent years building the infrastructure, and stopping all our suppliers sending anything in plastic, and working with local waste management companies to reduce waste. And also educating the staff and our community here,” he told Document.

Despite being a leader for sustainable sensibilities in the hospitality industry, Potato Head’s CEO and co-founder Ronald Akili is the first to admit that the company isn’t perfect, but “every day we work hard to make today better than yesterday.” Mitchell agreed with this simple sentiment: “We just want to do as good as we can.” Their pledge to ‘do better’ aims to mitigate the overwhelming nature of preventing environmental catastrophe, as well as the risk of alienating colada-sipping tourists.

Some elements of Future Design were purposefully less palatable. A brilliant rainbow spectrum overlooking the beach club’s entrance turned out, upon closer inspection, to be comprised of thousands of flip-flops collected from Bali coastlines—the medium of artist Liinda Klauss, whose installation 5,000 Lost Soles both welcomes and unsettles.

Elsewhere, waste was reimagined to showcase the value in what we typically take for granted. Faye Toogood, collaborating with BYO Living, revealed prototypes using high-tensile weaving from water bottle waste. Dirk Vander Kooij exhibited a bench made from 7000 CD-ROMs, the death of which can be attributed to one of the speakers, Tony Fadell (entrepreneur and inventor of the Apple iPod). Artists have long used their medium to challenge social norms—however design has often held a conservative seat, its purpose wavering between functionality and aesthetics.

British designer Max Lamb had been tasked by Potato Head with designing furniture for 168 rooms in a new hotel. Sustainable design is hardly unfamiliar territory for Lamb, whose traditional designs verge on the prehistoric, but the topography of Bali provided a completely new landscape for inspiration. “I was in awe that such a small place could have such a variety of crafts and materials alongside an abundance of humility, humour and beauty,” said Lamb “And all of this with sustainability unquestionably at the forefront.”

Lamb created ceramic glassware using Balinese sand, which is rich in black volcanic lava. Different iterations of his signature domestic chair saw another Indonesian-native material, the renewable resource of bamboo, handcrafted into a lounge chair. He also exhibited lamps, made from ijuk palm fibre and offcuts from the stone and bamboo industries, as well as a contemporary take on wicker furniture using rattan, prevalent for centuries in Indonesia. “It was important for me to visit Bali to discover potential materials [and] processes indigenous to the island,” Lamb explained. “I wanted the materials, and the skills used to create them, to be localized to the island…Everything used for my designs was sourced from within a 50-mile radius from Desa Potato Head.”

One outlier is the study set of chairs that Lamb made with 100% recycled PET plastic. He explained, “[the chairs were] the one anomaly in the collection where I did decide to import something. I wanted to demonstrate that recycling plastic has huge potential.” UK-based Smile Plastics produced the sheet material, made from recycled yoghurt containers and cosmetic bottles. The chairs were then fabricated by craftspeople of Kalpataru. “Each is made by hand, and each one has a unique personality and characteristics, because they were cut freestyle with a jigsaw,” he said. “There was no real measuring or accuracy involved.” The offcuts were used as welding for the chairs, as well as the accompanying glassware, making the products zero-waste.

The world has a seemingly endless supply of single-use plastics, plentiful for design use. Some warn of the use of repurposed plastic becoming a substitute for natural materials. Max Lamb speaks to its place in contemporary design. “I think, increasingly, both consumers and creators are becoming more critical, and as designers we are actively looking for alternatives. The problem with plastic is that it is created for mass production. It’s only now that we’re really discovering the devastating consequences of plastic and realizing what damage has already been done that people are waking up, and the design world must lead the way,” Lamb said. “Plastic is a taboo material, but it’s also an amazing material that needs to be respected, as we respect wood and stone. Plastic should be used in moderation. By collecting and recycling plastic waste, we can preserve the natural world whilst creating something lasting and beautiful”.

A typically unassuming product for environmental commentary that’s repeated through the exhibition, including by Lamb, is tableware. The company SerVies (Annemarie Piscaer and Iris de Kievith) harvest air pollution from Rotterdam for use as ceramic glazing in porcelain tableware, calling it ‘smogware’. The colored glazes, ranging from dark sepia to yellow ochre, characterize the poor air quality. Similarly, Agne Kucerenkaite’s Ignorance Is Bliss project sees the Lithuanian designer repurpose non-renewable metal as porcelain tableware and ceramic wall tiles. Ironically, the designs are more vibrant the more contaminated the material is. Zandglass by Atelier NL is made with wild sand, creating unusually colored glassware. Sourced from areas of unique geology, the tableware tells an interesting narrative about its origin and the politics of sand.

Potato Head doesn’t aim to be a progressive outlier when it comes to sustainability, but rather a potential model for others to replicate. With Future Design, the group aims to prove it’s possible to have good times and do good simultaneously—and that a more sustainable world is a more beautiful one. “It starts for us with making it beautiful, making the experience amazing, and having a good time, and then just by default it should all be sustainable,” Mitchell says. “Something can be sustainable but not beautiful and people are going to be against that compromise. That will never make a big shift or make a big change. The idea is not “don’t consume,” but “consume in the right way,” because at the end of the day, we are all designers in the creation of a more sustainable future. 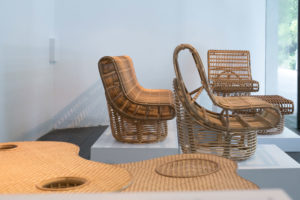