The Bat Signal has descended on Marseille, France. Los Angeles-based artist Alex Israel reimagined Gotham for an installation at the MAMO Arts Center, located on the rooftop of the Cité Radieuse, a 1952 Brutalist residential building by the seminal late French architect Le Corbusier.

Israel’s starting point for the exhibition, on view through August 31, was the 1989 Tim Burton film Batman, which became the fifth most successful Hollywood film in history. The movie catapulted the comic book superhero, created by Bob Kane and Bill Finger in 1939, into contemporary culture—resulting in branded merchandise, an animated television spin-off, and countless sequels. (Yet another film adaptation, The Batman, is set to be released in 2021.) Inspired by Marseille’s gritty feel as well as Le Corbusier’s Brutalist architecture, Israel drew a connection between the city, located in the South of France, and the Hollywood blockbuster.

Production designer Anton Furst created the dark, elaborate sets for the 1989 Batman. He reimagined the torpedo-shaped Batmobile, as well as all the other various props, including the Bat Signal, which the Gotham City Police Department used to call upon the superhero when it needed his help. Furst used a World War II-era spotlight in order to project the Batman logo into Gotham’s foggy sky.

Israel’s practice is imbued with Los Angeles, the city where he was born and still lives, and its entertainment industry. The artist has released a teen surf drama starring Pamela Anderson titled SPF-18, created a gradient-covered Rimowa suitcase inspired by the colors of the Los Angeles sky, and even worked out of the Warner Brothers backlot, incorporating rented film props into his artwork as readymade sculptures.

Warner Brothers eventually granted Israel permission to use both the 1989 Batmobile and the Bat Signal for the exhibition in Marseille. In the exhibition, the Batmobile is presented as a sculpture in the building’s rooftop pavilion, becoming the focal point of an installation consisting of smoke, light, and sound. The Bat Signal will be beamed high up in the Marseille sky each night, blurring the line between fiction and reality, and enabling the work to be seen from a distance. 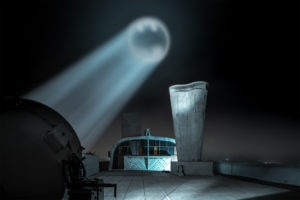 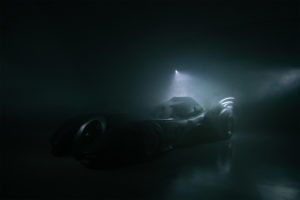