Photographer William Klein has spent a lifetime looking at the world

As iconoclastic as he is revered, William Klein has been confounding expectations for more than 50 years. In both photography and film, his work transfixes you with the sheer viscerality loaded into each of his scenes; scenes that seem to be on the very brink of exploding into disrepair. With an oeuvre that spans more genres, mediums, and subjects than one can count, Klein has always managed to take the often staid act of capturing a scene and injecting it—perhaps even forcefully—with kinetic energy. Painting and sculpture were his first known forays into expression and art, and he received no formal training in photography, a fact that’s perhaps pivotal in his completely disruptive approach to the art. Despite or because of that approach, his photographs have gone on to become the standard against which artists of various media are measured, in a career that’s taken Klein to Paris, Rome, Tokyo, and Moscow.

Hans Ulrich Obrist, artistic director of the Serpentine Galleries in London, has a similar fascination with art that bends genres and disrupts norms. Alongside his work at the Serpentine Galleries, he is the creator of 89plus, a “long-term, international, multi-platform research project,” which he co-founded with the curator Simon Castets. Obrist’s Interview project, of which 28 books have been released to date, has placed him in deep discussion with innovators and icons in various fields. Here, the two discuss Klein’s youthful transition into photography, studying under Fernand Léger and living in France, his time spent with Federico Fellini, and the long-forgotten impact of the work done by Constructivists in Russia.

Hans Ulrich Obrist—It’s so nice to see you again. I’m very happy we can do this interview. You’ve previously mentioned that Fernand Léger encouraged you to do murals, and that when you were creating the photographs you used on your movable panels project, all of a sudden there was a kind of a blur, and that was an epiphany. Can you tell me about that epiphany?

William Klein—Well, I first did a show at the Piccolo Teatro in Milan in 1942. It had a wonderful director who was very much influenced by German theater. I had the show there, and then a gallery called Il Milione said, ‘Come do a show in our gallery.’ That was the first work I did with photography and graphic work, and also the first time working with an architect. Mangiarotti, an Italian architect, had done a mural composed of six panels, and when you turned the panels you could make a thousand different combinations because it was painted on both sides. He asked me if I could paint it. I was 24, and when you’re 24 you think you can do anything, so I said yes! I painted this big mural—it was about 15, 20 meters wide—for four or five days.

Hans—He’s a well-known designer and architect, Mangiarotti, no?

William—He was an avant-garde architect and worked at the architecture firm Belgiojoso and Rogers.

Hans—When you went from paintings to photography in the 1950s, what was it that you found in photography that painting didn’t give you?

William—I thought that in photography there was the means to do things that you couldn’t do by hand, and so I became excited by the possibilities of abstract photography.

William—We all became excited by the paintings that we didn’t know very well. Masaccio, Piero Della Francesca, and so on. Léger wanted us to look backwards. He told us to look to the Quattrocento, the Italian art of the 1400s, and we went out and stole books on the subject because we didn’t know the work that he was talking about. He told us not to look at what people were doing now, but to look back at the 15th century, when painters worked with architects. There was a big disappearance of books from the shops.

Hans—Who were the painters besides Léger who inspired you?

William—Mondrian. My wife inherited a house on the Dutch border in Belgium and so I was very much interested in De Stijl.

Hans—At some point you left Europe, and you went back to New York, and that had a lot to do with you meeting Alexander Liberman in ’55.

William—He saw an exhibition that I had here in Paris, and he said, ‘Would you like to work for Vogue?’ I asked him what I’d do, and he said, ‘I don’t know, it depends. We’ll see. You can be the assistant art director and you can find new ways of making photographs.’ He was very inspiring. He gave me a lot of opportunities. It was the first time I got paid for what I was doing.

Hans—He basically just paid for you to make a portrait of New York, no?

William—Yes, they financed my book on New York. They paid for everything; paper, an enlarger, and even chemicals.

Hans—You once said that it was almost like you were a make-believe ethnographer. What did you mean by that?

William—I wanted to treat New York and the people in New York like Zulus. I thought that was the way to treat the citizens of New York. Did you meet Chris Marker at that time?

“I did the layout of my book on New York, and I showed it to American editors, but American editors thought it was impossible to publish this book because it was anti-American.”

Hans—Yes, I met him many times. We saw each other very regularly. He invited me to his house, and he was a very wonderful conversationalist. We also did a small exhibition together. Marker told me at the time to watch your amazing film Broadway by Light, from 1958. I watched it again yesterday. There’s a beautiful text by Chris Marker at the beginning. Can you talk a little bit about how he helped you? What did you learn from him?

William—I did the layout of my book on New York, and I showed it to American editors, but American editors thought it was impossible to publish the book because it was anti-American. I looked at a little series of books that Marker did and I went to see him and he said, ‘We will publish this book.’

Hans—That was Life Is Good and Good for You in New York, from ’56, right?

Hans—He also played a role in your film Broadway by Light. So did Alain Resnais. Can you tell me about the genesis of that film?

William—The director of the cinema house worked with government grants, making short films with people like Alain Resnais, Chris Marker, and Agnès Varda. I’m American, not French, so he thought it would be a good idea to have French technicians on the credits of the film. And so he invented roles for Marker and Resnais. The credits read, ‘Subtitles by Chris Marker.’ There are no subtitles.

William—At the top, yeah. But there are no subtitles. It read, ‘Technical director, Alain Resnais,’ as well. He didn’t do anything on the film, but he encouraged me. He said, ‘You did a book? Now you have to do movies.’

Hans—You also worked with Fellini and Louis Malle, on the Nights of Cabiria and on Zazie dans le Métro. So, before you made Broadway by Light you already had some experience with cinema.

“I wanted to treat New York and the people in New York like Zulus. I thought that was the way to treat the citizens of New York.”

William—I was very much fascinated by the films that Fellini did, and I had the opportunity of going to Rome to be his assistant.

Hans—What did you learn from Fellini?

William—Well, I didn’t know Italy, but I knew Italy through his films. Some photographs I took were inspired by the films that Fellini did at that time. It was a critical look at Italians and Italy.

Hans—And Louis Malle? What was that experience?

William—Louis Malle was going to do a film based on Raymond Queneau’s novel Zazie dans le Métro. He called me up and he said he’d like me to invent graphic ways of filming. In the Zazie dans le Métro film there were sequences that were very much inspired by Broadway by Light. There were sequences that were dominated by the electric light sign, and the people would change color with the signs.

Hans—You know, Broadway by Light inspired so many artists. There is also your wonderful book, and your wonderful work, from Moscow. In a way, you’ve brought together film, painting, graphic design, photography, and politics, and that’s what the Russian avant-garde in the early 20th century aimed at.

William—The Constructivists were my inspiration. I was very much surprised that somebody like Liberman, who was Russian, was so afraid of the politics of the Revolution that he left Moscow. I thought the Russian avant-garde were more interesting than what was being done in Berlin or Paris at that time.

Hans—The work of the Russian Constructivists wasn’t so visible in the West then. Now it’s very famous. How did you find it?

William—It’s true that the Russians didn’t inspire artists and critics in the West. It was restricted to Russia, actually. And I thought that was ridiculous, so I tried to know a lot about what the Russians were doing.

Hans—And were you also inspired by Russian graphic design?

Hans—In the ’60s you started to do more films, moving away from photography and into interference. I’m particularly interested in these films that are being discussed right now, which so many younger artists are looking at. One is your film The Pan-African Festival of Algiers. You called it a collective film because it involves speeches and interviews. It has many different layers. It’s like a collective endeavor. Can you talk a little bit about these elements, and how you combined them?

Hans—And what about the film Eldridge Cleaver, Black Panther? That’s a portrait of one person who had to leave the United States. It’s very relevant right now.

“I like your definition of photography as living and breathing. You said once that what would please you most is to make a photograph which is as incomprehensible as life.”

William—I did a film at that time called Mr. Freedom, and I thought that it would be good to show a superhero.

Hans—Mr. Freedom is very relevant in the time of Trump. It’s an urgent film. It has to be shown again.

Hans—When we met about two years ago, you told me that you never wanted to return to America because it’s such a right-wing country.

William—I see the situation the way everybody sees it. Trump is isolated. He’s alone, with the whole world watching him and afraid of him. What’s happening with Trump, for the time being, is only talk, but he’s saying that he wants to send the United States Air Force and the Army to North Korea. He’s saying America is the most powerful country in the world, and there’s no reason we shouldn’t use our power for what we believe in. And what he believes in is completely fascist. I mean, what everybody thinks of Trump nowadays is what Mr. Freedom was talking about in my film.

Hans—What would be your definition of a photographer? What is photography?

William—Photography is living and breathing. I don’t ask myself that question. I’m doing a show in Tokyo this winter with the fashion designer Issey Miyake, who has a wonderful gallery where I’m doing two or three hun-dred photographs. They’re all projections and nothing on paper.

Hans—I like your definition of photography as living and breathing. It’s beautiful. You said once that what would please you most is to make a photograph which is as incomprehensible as life. 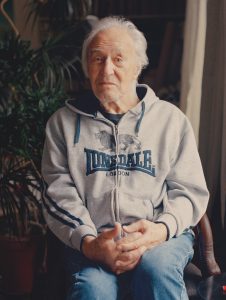 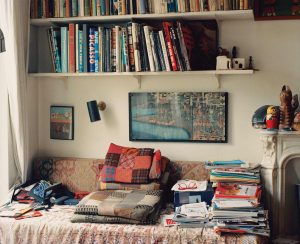