It should go without saying that no one asked for Eli Roth’s remake of Death Wish. Pushed out into the world this spring, the film conforms to a superfluity of a peculiarly Hollywood sort. The original and its sequels are overrated, monotonous, and inferior to cult films from the same era. The whole scam betrays the exhaustion of a reflexive Gen-X nostalgia, one forced on us weekend-by-weekend at the box office. Contemptuous of baby boomers and perplexed by millennials, Gen-Xers have conspired to refashion a younger audience, now the viewers of The Last Jedi and superhero movies, in its own image—and it’s a drab thing to behold. After years of complaining about its parents’ unwillingness to die or give it jobs, a generation raised on the New Hollywood of the 1960s, perhaps the last American generation of means, has chosen to inflict upon audiences the same films that its parents inflicted upon them. This recurring cynicism amounts to a form of cultural protectionism, a withdrawing into the righteousness of an enduring imperial self.

Protectionism is, of course, the aim. But not the protectionism of trade wars or Steve Bannon, though there may be some relation. The new Death Wish, a remake of the 1974 original featuring a Charles Bronson armed to the teeth against urban thugs, is immediately superfluous because it has already been made. It’s a redundancy, too, as it is an American vigilante film in an era when many or possibly most Hollywood films contain the germs, if not the whole disease, of vigilantism. The reason Death Wish is worth our consideration at all is due to the violent promise embedded in its cinematic pallor and in its ragged labor to obtain the essence of a trope. The substrate of all American vigilantism is protectionism, and in the history of the United States wealthy individuals—imperial selves—can act with impunity to protect their property.

“White Americans have always known how to develop aristocracies from local resources, however scant,” writes Margo Jefferson in Negroland. In Death Wish, Bruce Willis is Paul Kersey, an emergency surgeon based in Chicago—a city, we’re reminded in the film, that is struggling with black crime and murder. Here are Jefferson’s scant resources: Chicago, as a scene, is orchestrated as a bellum omnium contra omnes, a Hobbesian war of all against all, and this much is required of all recent films, like the Batman movies of Christopher Nolan, that aim to distill vigilantism to its essence. Early in the film, we find Kersey in a spat with an angry parent at his daughter’s soccer match, and we are meant to respect both his restraint and his latent sense of protectiveness. His opponent in the argument refers to Kersey as “Lake Shore Drive.” Here is Jefferson’s aristocracy: Kersey is a wealthy, propertied adult, a nobleman who protects his estate—including his wife and daughter—until the war arrives. Cliché, in the film, manifests as self-restraint: director Eli Roth and writer Joe Carnahan build their aristocracy out of scant resources, out of the readymade and available dregs of the vigilante genre. Kersey’s wife is murdered and his daughter put in a coma—restraint: the villains are white—while he’s performing surgery at the hospital (and dutifully carrying to fruition the Protestant work ethic). Slowly, automatically, Kersey becomes a vigilante in the way a chrysalis or pupa becomes a moth, an evolution made all the more convincing, possibly, because Bruce Willis has come hairless to the role, like a baby. Emerson, for his part, believed the American soul, the imperial self, unveils itself to us as a child in time and appearance.

War, Hobbesian or otherwise, is the incubator that heats vigilance into vigilantism. “It is a call to be vigilant,” George W. Bush said on November 8, 2001, “to know that your Government is on high alert, and to add your eyes and ears to our efforts to find and stop those who want to do us harm.” This term, “vigilance,” was a keyword of the Bush era. At its root, it means to be awake, to be aware, to hold vigil. For Bush, it was shorthand, a permission slip for the open season violence favored by white supremacism—the violence crawling under the skin of Paul Kersey. Given our state of perpetual war, it should be no surprise that we’re in a state of perpetual, insomniac wakefulness. Vigilance is perhaps now the dominant trope of American cinema; we can’t turn it off. The drama of most films means this vigilance erupts into vigilantism.

There is a name for this condition. In his occasionally bizarre yet useful book Strain of Violence: Historical Studies of American Violence and Vigilantism, Richard Maxwell Brown writes that late-nineteenth century America experienced prolonged scenes of violence that were bolstered by a kneejerk acceptance of vigilantism. These episodes of vigilantism were almost always spearheaded by property holding whites who completed their aristocracies by eliminating nonwhite immigrants, as in the case of the California Gold Rush, a historical greenhouse of American vigilantism. In such cases, vigilantism was the norm:

The “one-shot” vigilantism described by Brown is of course the kind valorized in American Westerns. And the racial violence mentioned at the end of the paragraph came to characterize the twentieth century, during which the lynching of black Americans became the preferred form of American vigilantism.

Instant vigilantism, as with vigilantism of any variety, requires a perceived threat, Bush’s “those who want to do us harm.” The “us,” if we’re to rely on the American historical record, is propertied white people, would-be aristocrats of whatever scant means. But vigilantism also requires a notion of the police—perhaps the literal police, but any failing injunctive force will do. A vigilante, in theory, needs to believe that some institutional or normative inadequacy is preventing justice from being carried out. In Death Wish, this decrepit institution is indeed the local police force, which cannot find those who inflicted violence on Kersey’s family—his property. Yet the film’s ending eerily conforms to another expectation of instant vigilantism: the police are now the vigilantes, or at least in league with them. After Kersey completes his necessary series of executions, the police detective gives him a knowing look. “Now that justice has been restored,” the look says, “you can stop the killing. And I won’t lift a finger against you.” It’s a moment that reinforces what we all should know, being always awake, about American life: the police now routinely act as outlaws. They act as vigilantes oppressed by an invisible wave of social decay obstructing their professed aim to serve and protect. A decayed social life that is plaguing the country, according to Roth the director, in a recent interview. “Crime is out of control and police are overwhelmed and there’s no way to stop it,” he said. “It feels like however far we’ve gone in other areas, we have not progressed in terms of crime.”

“Vigilance is now the dominant trope of American cinema; we can’t turn it off.”

Roth adds that much of the controversy surrounding Death Wish stemmed from its original trailer, which showed Willis targeting black Americans. The film, as I hinted before, goes to great lengths to announce that Kersey is targeting criminals who sometimes happen to be black—the killing of white criminals in the film is lingered on in an exhibitionist way. In this respect, though, Death Wish belies any notion of bravery in comparison to another recent vigilante film, Good Time, by the Safdie brothers, where there no reservations about its protagonist’s strategic targeting of black lives. Freed of the superficial violence in Death Wish, Good Time’s cunning distillation of vigilante logic portrays an American impulse just as sinister.

A strange argument for Good Time’s status as a vigilante movie: it takes place almost entirely over the course of one wakeful night. Its lead character, Connie—a B-movie name for a con man—is played by Robert Pattinson as a kind of jerky, insomniac wise guy. He is, of all recent film characters I can think of, an embodiment of wakefulness; Connie is always more alert, more vigilant than his opponents, and his opponents are often black Americans. He leverages their vulnerability to disturbing effect. Disadvantage is Connie’s resource, a cornerstone in his aristocracy of diminishing means.

The brilliance, I think, of Good Time is that it knowingly reflects the social war of contemporary American life—of our war against social life itself. The opening scene of the movie shows Connie’s mentally impaired brother, Nick, in a therapy session where he struggles to answer straightforward questions. Connie arrives and busts his brother out of therapy, which he later denounces in vague terms as forced upon Nick. Next, they rob a bank while wearing masks fashioned to look like black faces—within a few minutes, Good Time proves itself considerably more conscious than Death Wish.

“This term, ‘vigilance,’ was a keyword of the Bush era. At its root, it means to be awake, to be aware, to hold vigil. For Bush, it was shorthand, a permission slip for the open season violence favored by white supremacism.”

Yet, the botched robbery is not merely an act of greed or despondency. Connie has promised Nick that they’ll use the money to abscond to the country, where they can live in comfortable isolation—an aristocracy of two. Nick’s arrest prompts much of the film’s remaining action. Connie moves from one scam to the next, in the process highlighting the nighttime movements of a city that famously doesn’t sleep. Good Time becomes an inverted vigil for social life and its institutions. He tries to break his brother out of a local hospital, where he dupes an overworked and underpaid staff. He hides out at the house of a black immigrant woman in Queens, and he relies on the boredom and curiosity of an unsupervised black teenager whom he seduces for advantage. He beats a black security guard, who is trying to protect property (a theme park) that doesn’t belong to him, unconscious, and briefly assumes his role of employment—he is believed by the police. Near the end of the film, Connie, holed up in an apartment with a white ex-convict (played by Buddy Duress), berates the man, a drunk, for contributing nothing to society. Moments later, Connie is arrested by the police and taken to prison.

What has so far been ignored about Good Time is the way that it lays bare the nerves of American vigilantism. Connie is a failed prince, of sorts, who wants to protect the only family he cares about, his brother. But what does he want to protect Nick from, and against what authority? The final scene puts Nick, with a new haircut, back in a therapy session, this time in a group setting. “Connie did the right thing, the responsible thing,” the therapist says, “and he’s right where he belongs.” Meanwhile, Nick makes a breakthrough, he participates with the group. In this moment, Connie, though off-screen, is presented as the quintessential vigilante of the contemporary American mode: his acts of vigilance were set against the possibility of Nick pursuing a meaningful social life. The authority he has railed against is a state that is routinely undermined—by men like Connie—in its attempts to provide care by way of its institutions. It’s a failed state, America, where everyone is alert and instant vigilantism has become the dream of waking life. 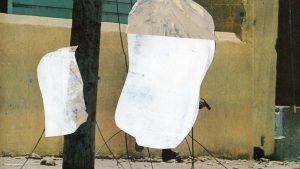