Bianca Saunders, the London designer inspired by Frank Ocean and her father

The designer shares the origins of her sharp, innovative menswear, from Prince to Lorna Simpson, following her show at London Men's fashion week.

London based menswear designer Bianca Saunders has been making waves in the fashion industry as of late with her fresh take on classic tailoring and wardrobe staples. Her unique process of draping, cinching, accentuating each quintessential garment allow her to explore and broaden as she so eloquently puts it “the spectrum of masculinity.” Document’s Shawn Lakin sat down to discuss with the trailblazing designer her wide range of inspirations from Lorna Simpson to Prince to her own dad.

Shawn Lakin—Who is your most fashionable family member?

Bianca Saunders—I definitely would say my dad. He’s someone that would pay for good quality, like shoes, or a good quality coat. And he was always someone that would pick quality over quantity when it came to fashion. Also he grew up in America for part of his life, there were a lot of musical influences that he listened to. He had a more of a 90s hip hop style at one point and then a bit more suave—loafers, leather jacket, a shirt. How he carried himself was great.

Shawn—What led you to menswear instead of womenswear or any other field?

Bianca—I guess throughout studying I’ve always had a thought of doing menswear. Especially around the time of Astrid Andersen, I felt as though…with fashion it was kind of changing menswear a bit, in terms of pushing the boundaries of [things that were previously]  seen as unwearable…During the end of my BA at Kingston, a tutor that was almost like a mentor to me—he saw my research, and the whole concept story was based around men, and he mentioned a few times, why don’t I try menswear? I thought it was a scary move to make considering I was six months from leaving my BA course, but then he was like, “Go away and design a project and see how you feel.” I did that as a test and then it just made things 10 times easier for me. Going into menswear, I [was] a bit naive, and I kind of liked that aspect of it.

Shawn—Your collection investigates male masculinity and sexuality. As a woman, what’s your view on these? How do your designs enhance and interpret them?

Bianca—A lot of my work is based on my surroundings and conversations I have, so my collections become a learning curve for me and how I treat masculinity, and how I want it to be handled in spaces around me. It’s still about me, but not [in a direct way]. But I feel like, especially with menswear, there’s a lot more aesthetics that could [still] be brought to menswear. Exploring and playing with the spectrum of masculinity is really interesting to me, because people are still getting to used to challenging themselves in what they wear…I think my favorite thing is when people [are] actually wearing the clothes, usually guys are a bit more removed from a gender-fluid, non-binary world.

Shawn—Bedrooms are the setting of your latest lookbook and of your film. What does yours look like?

Bianca—It’s quite packed up at the moment, I’m definitely someone that likes to keep a lot of stuff. So I have a mini moodboard that reminds me of what the brand is… What kind of couch does he sit on, what kind of socks does he wear, what kind of drinks does he drink, who does he hang out with? Then images that sort of collect that. 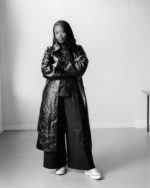 Shawn—What’s the most treasured object in your bedroom?

Bianca—I don’t let go of a lot of things, you know, which is actually quite crazy. I keep everything down to cards—if someone gives me a cute birthday card. Actually what I do have, it’s a bit weird, or not that weird. I have a bottle that I won as a prize and I haven’t opened it yet—it’s a bottle of alcohol [laughs]. [I have] a lot of those.

Shawn—What was the prize for?

Bianca—I won a first place prize for Sophie Hallette, a French company that supplies lace. They usually work for companies like Chanel and Dior. I did a graduate project for them, and I got the first place prize, so I got [the bottle] that’s almost four years old, and I haven’t popped it yet.

Shawn—And old birthday cards—that’s great. If there was one person, living or dead, that you would want to see in your designs, who would it be?

Bianca—Definitely Prince, a hundred percent. But a bit more in his earlier life. And, I guess, if I was to pick a second person, even though you didn’t ask, Frank Ocean. Listening to his music—I remember listening to Blond throughout making the collection, all the sounds he picks are very alternative, and sometimes there’s hardly any lyrics, but they just make sense to me.

Shawn—You mentioned in an interview that you were inspired by Lorna Simpson—we actually did an exclusive cover with her and a portfolio for issue 12 of Document. What about her inspires you?

Bianca—I really love the way she incorporates identity. I feel like she has a very abstract imaging of it, and her collage work has been quite influential. There’s an image that she’s done that’s in my current moodboard, actually. It’s called Female, and I think it’s a woman in different positions. I really like the idea of how people position themselves, and that’s what sort of inspires [my] clothes—body language is quite a big [part] of how I’ve chosen [models] and that kind of stuff. I saw this exhibition that she had, and it was a stack of Ebony Magazines…My mom’s a hairdresser, and in the hairdresser’s, and looking through black hair magazines, there’s this image that you want of yourself, but then it’s different than how you perceive it. 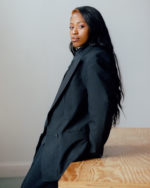 Shawn—How does living in London inspire your work, if it does at all?

Bianca—I think I just can’t imagine living anywhere else… I haven’t really lived anywhere else, and London just has a great energy about it. Comparing it to New York is quite different, because New York has a different energy, I feel like people really present themselves quite well. Whereas in London, it’s more like an accidental kind of presentation of themselves. Some people are not necessarily trying to dress to present themselves, they just dress in a way that’s quite thrifty, I think.

Shawn—How do you decide what models to include in your campaigns and lookbooks and presentations and things like that. How important is representation to you?

Bianca—Very, very important. For the first two seasons, I used guys I know. They know how they want to use the clothes, or how they wear it, and it’s great when they do feel comfortable. One time I had a casting and there was one guy who just didn’t want to wear anything, and I was just like, I can’t have a guy in the show that doesn’t feel comfortable in the clothes that he’s wearing, or doesn’t feel enthusiastic—authentically enthusiastic—in what he’s wearing. I want everyone to actually understand what they’re in, and how they feel. But being quite early in my career, I’ve really enjoyed seeing how different people put it together, and how they wear it—I think that’s one of the exciting things I do look forward to seeing more in the future.

Shawn—My last question is how would you describe yourself in three words?

Shawn—I love that it’s reserved and outgoing, because those things are sort of in contrast with each other.

Bianca—Yeah, I feel like I’m a very in-contrast person. People find it very difficult to grasp my personality because I’m the person that’s up for anything, but then in terms of being very outspokenly open, I’m not. 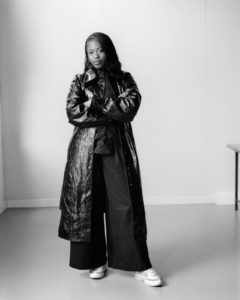 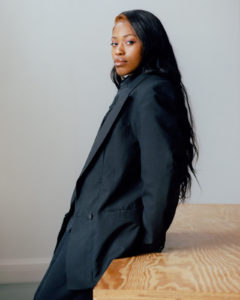