The designer discusses the freedom and terror of being Berluti’s new man.

“The way I would describe my own work is that I have one foot in tradition and one foot in the future,” Kris Van Assche said last year in an interview—his first upon leaving Dior Homme after 11 years—for Document’s Spring/Summer 2018 issue. The Belgian designer has a respect for heritage as profound as his curiosity about what’s next; evolving Dior Homme into a luxury beast with sneakerhead sensibilities, securing runway shows in China and an ambassador in A$AP Rocky. In April last year, Van Assche was confirmed as the new creative director at Berluti, the ultra-luxury brand was founded in 1985 by Alessandro Berluti, with the Italian cobbler’s single lace-up shoe design. Van Assche has long believed outfits start from the feet, and he spent the next nine months thinking a lot about feet—or at least shoes—before his big Berluti runway debut this past February. “When I got here at Berluti, I told the people, ‘Okay, take me to the archives,’” the designer recently recalled to Document his first visit to Berluti’s factories, having the previous decade-plus immersed in the famously  archives of Christian Dior. “And so they put a pair of shoes on my desk.”

The first look at Van Assche’s much-anticipated Fall/Winter 2019 debut was an homage to Berluti’s singular craftsmanship: a leather suit in the same warm brown patina as Berluti’s first pairs of shoes in 1895. “It seemed that the craft that went into the shoes was something that needed to be translated into other categories,” he told Document. “That being said, it was not an easy process. Thank god I had nine months to work on the first show, because it was actually really complicated to translate that craftsmanship and skill over to ready-to-wear.” As Document showcases Van Assche’s vision of Berluti in a fashion story shot by Alasdair McLellan for the Spring/Summer 2019 issue, we talk to the designer about telling love stories through fashion, and why no brand is too luxurious to have a good sneaker.

Hannah—How did you familiarize yourself with Berluti’s heritage in the period leading up to the capsule and the catwalk show? You’ve said you found the lack of a big archive to tap into quite liberating. I would find that quite terrifying.

Kris—I think, coming from Dior and accepting this position, the difference couldn’t be bigger, when you talk archive and DNA of the brand. At Dior we looked so much to Mr. Dior, we had so much archive, and so many stories that had been told and that still can be told. It’s an overload of information. When I got here at Berluti, I told the people, ‘Okay, take me to the archives.’ And so they put a pair of shoes on my desk. That’s not even a joke, it’s really true. There is not so much information. There is the iconic pair of Alessandro shoes, there is the iconic pair of Andy shoes, there is patina as a craft, and there is also a graphic. Literally, that’s it. There is a lot of freedom because you can come up with a whole new silhouette starting from the feet up. It is very liberating but it’s also scary as hell.

So I discovered this incredibly modern factory. It’s magnificent, really, the way everything is done. But it’s combined with very traditional craft. People literally get their hands dirty, making shoes, they put the needle in the shoes by hand. Berluti has a very traditional way of making shoes. That’s something that immediately appealed to me—the contrast between modernity and craft. I discovered how patina felt, how it’s about layering colors one on top of the other. It’s a very different way of using colors that I’ve never seen anywhere else. It’s all about transparency and layering. It’s a very inspiring process. The craft has been more inspiring than any historical archives.

Hannah—Do you see the era of streetwear, and designing high-end luxury menswear in it, as similarly scary but liberating?

Kris—I think that was part of my decision to accept [the Berluti artistic director role] as a new challenge. I’ve always been a street and sportswear guy myself, and I really love a nice pair of sneakers. But I also feel that at one point everything becomes collaboration and starts looking alike. A good collaboration is a good idea, but so many collaborations can also become an overdose. The difference between street and luxury brands is fading, and I’m not convinced that’s actually a good idea. It’s appealing on a short-term level because it’s cool, but there needs to remain a difference for luxury. I thought it would be quite interesting for me to go in the opposite direction. I liked the idea of going a little bit against the flow. But it doesn’t stop me from bringing out the Gravity sneaker.

When I thought of Berluti, when I was younger, I had a feeling that everything was talking to one kind of man. If Berluti wanted to be in the future it had to speak to different types of men. It’s not about throwing out tradition, it’s not about killing whatever made Berluti be, but it’s about making the brand appealing to a younger or different generation. I just felt that sneakers have become almost a basic item now. You need a suit, you need a sneaker. So I felt that we needed to complete the offer in order to appeal to different types of men. But I really like that we do it within a very luxurious environment. We’re not going to stop that. That’s what makes Berluti different.

Hannah—You were talking before about the importance of representing a whole spectrum of men. Do you have specific men in mind, like the star ambassadors of Dior Homme, or are they more of an idea?

Kris—I’ve been fortunate to have built relationships with celebrities so it’s been super nice to able to continue that. I’m also very cautious not to let celebrity overshadow what I’m trying to build up. Coming here with a short history of ready-to-wear, in the brand, it allows me a lot of freedom to construct the image, to construct the character that I want. It’s Berluti “Men”—men in plural. It’s very important that I’m not on auto-pilot. We had a lot of celebrities at Dior, but it was very important that they were different. 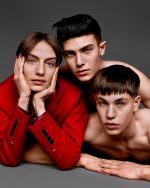 Hannah—And what about including all those powerful women on the runway?

Kris—It’s really much more about what I just mentioned, about the construction of these characters. I was really lucky to be able to talk to Olga of the Berluti family. She spoke a lot to me about what she felt Berluti should be about, and she mentioned this idea of a vagabond of luxury—an adventurous person, a rebellious person, but within the world of luxury. In that sense Berluti feels a little more rugged, a little more seductive than the more pure couture menswear I’ve worked around in the past. To give it that edge, to give it sensuality, to make it more mature and maybe more playful, it felt like a few girls would bring a lot of energy to the catwalk show. It’s really just a play of proportion and a play of size for now—it is women in men’s clothes, basically. It brings a lot of energy and it’s a way for those guys to feel way more alive, in a weird way. Within these archives and this story, it’s been very helpful for me to be able to construct these imaginary characters, to have some women with that, because it’s just such a nice story to tell.

Hannah—It reminds me in a way of what Casey Cadwallader is doing at Mugler, or the inverse of it, modernizing the idea of the Muger Woman by featuring all genders in shows and campaigns.

Hannah—In the past you have made many references in design to the ‘80s and ‘90s subcultures of your youth. The last time we talked to you for Document you described your role as a “bridge-builder” between youth culture and traditional luxury.

Kris—I’m definitely still very sensitive towards those references. I still love youth culture, I still love the ‘90s sportswear culture. I mean, it’s just part of who I am, and it’s been inspiring me for the last 50 years. But I’m also very cautious to not be working, yeah, on auto-pilot. Some references feel less in their place at Berluti than they might have done at my previous jobs. I guess the contrast will become bigger as the level of luxury becomes bigger. So certain things work and others don’t. It really comes down to personal feeling. Sports and the ‘90s are always going to be in the back of my head because that’s when I was a young kid and learning a lot about fashion myself.

Hannah—You can always have the music. I believe Frédéric Sanchez did the soundtrack for your debut Berluti show? He’s one of my favorite people in fashion.

Kris—Frédéric is a genius. I always tell him that he puts words on images. He’s like the soundtrack to a movie. I’m trying to tell stories—this whole romantic idea of a guy and a girl talking on the stairs at the opera. Frédéric is such a genius to really put emotion into the ideas. I’ve been working with him for a very long time, and each time I’m still pleasantly surprised at how right it feels. I mean, we might disagree once or twice, but when it’s finally coming there, I’m always surprised about how right it comes. To some extent I’m still thinking about what you said about street and the ‘90s, and you can get your fix in the music, but you can also find it in fine leathers. So those ideas are definitely there. 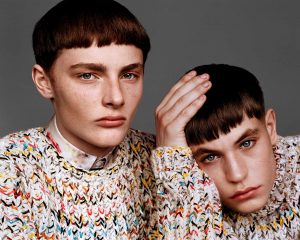 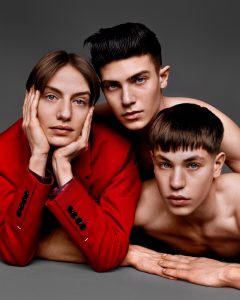