Exploring why the real-life pokemon are the world's most trafficked animals.

Pangolins are cute little scaly mammals that look a lot like Pokémon. They’re also being poached to the point of extinction. Three years ago (the last time the numbers were counted) it was estimated that 57,000 pangolins were being killed annually.

In October 2016, there was an agreement between over 180 countries to stop any form of pangolin trading outside of extreme circumstances. This is the highest possible form of protection from the Convention on International Trade in Endangered Species.

Just a few weeks ago, a 30-ton haul of pangolin body parts was seized in the state of Malaysia, from a facility in a northern part of the island of Borneo. It’s the biggest bust of its kind the region has seen to date.

Carly Waterman, the pangolin technical specialist at the Zoological Society of London, said the amount of trafficking has skyrocketed over the past 10 years. “More than a million pangolins are estimated to have been snatched from the wild in the past decade,” she says. “That’s one every five minutes.”

The reason these adorable creatures are being killed is because of human consumption. Eight species of pangolins are found on two continents. In Africa, they’re hunted for their bushmeat, but it’s in Asia, specifically China and Vietnam, that they’re being wiped out because of their supposed health benefits. The pangolin’s scales, blood, and other body parts are often used in traditional medicine—it’s the pangolin’s body armor that makes them so sought after. Their scales are made out of keratin, like rhino horns or human fingernails, which has a high price on the black market, despite science suggesting animal horns, scales, and bones offer few health benefits beyond what you could get from chewing your own fingernails. In fact, as the World Animal Investigation found, excessive pangolin consumption can have some pretty adverse side effects, such as bloating, jaundice, and liver damage.

In the meantime, at the hands of illegal traders, pangolins are treated abysmally. They can be smoked out of trees, boiled alive to remove their scales, and drained of all their blood.

The problem is that pangolins are incredibly hard to raise in captivity, and they’re very easy to catch in the wild; when faced with danger they roll up into a ball, which means poachers can simply pick them up. Thin historical interest in their breeding habits and general habitats has led to a serious gap in our understanding of them. To add to that, pangolins are solitary animals. They don’t tend to roam around in big groups, instead spending lots of time in trees or in the undergrowth, and they’re nocturnal, so only come out at night.

Warning screen on Instagram when searching for the hashtag #Pangolin.

Given all of the above, plus the voracious appetite fuelling an enormous international illegal trade, you can see why their numbers are dwindling. After a two-year investigation, the World Animal Investigation found the poorest hunters in India’s Assam state can earn a full year’s salary by selling a single pangolin.

In 2017, Instagram teamed up with the World Wildlife Fund to and TRAFFIC to make people aware of the plight of trafficked animals. Now, when you search for cute pictures of endangered creates on the platform, a warning comes up alerting you to the reality of the situation, and asking you to think about the context of any pictures.

Thanks to the worldwide crackdown, this week, a report in Bloomberg said traditional Chinese medicine companies are becoming less reliant on the creature. But pangolins are still disappearing in the wild, and all because of misguided beliefs that they hold some sort of hidden power. Traditional medicine claims pangolin body parts can help treat impotence and fertility, but the only thing the trade seems to be achieving is irradiating creature from the planet. 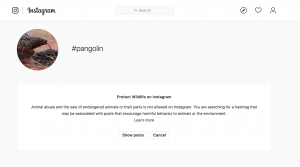