The two artists discuss love, life, and their first exhibition together at Jeffrey Stark.

Jackson Pollock and Lee Krasner. Jasper Johns and Robert Rauschenberg. Diego Rivera and Frida Kahlo. When artists couple up, it could mean magic—or disaster. For Kunle Martins and Jack Pierson, it was a romance that was ten years in the making. Though the two have about two decades between them, they both come from similar circles.

Pierson met his contemporaries, who included Nan Goldin, Philip-Lorca diCorcia, and David Armstrong, while he was enrolled at the Massachusetts College of Art in Boston in the ‘70s. They would eventually become known as the Boston School and move to New York in the ‘80s, capturing the turbulent transition from youth into adulthood at the height of the AIDS epidemic, when drugs and creativity ran rampant in downtown New York. Alienated from convention as a queer black man, Martins would run the streets of downtown New York decades later as a graffiti artist known as Earsnot who was part of the Irak crew with the late Dash Snow, hanging around personalities like Ryan McGinley and Dan Colen. McGinley documented the debauchery that enveloped them with his camera as they tagged walls in the middle of the night, consumed drugs, partied, and made love.

Pierson and Martins, who has crossed over into fine art, would cross paths in Florence about a decade ago, but it wasn’t until last year that they would become a couple. A year ago, their friend, curator Blair Hansen, suggested that the two do a show together deep in Chinatown at Jeffrey Stark, a tiny gallery founded by Angelo Lanza located on the basement level of the dingy mall at 88 East Broadway—an appropriate venue for the couple. Each artist would do a portrait of his significant other, adorning it with relics like shells and soda cans—from their shared experiences. The culmination is their first exhibition together, Pee Party, which is on view through April 21. Here, Pierson and Martins recount their love story, why they titled the show Pee Party, and the time Pierson served as Martins’s look out during a night of tagging.

Ann Binlot—How did you two meet?

Jack Pierson—It’s a long story. It’s a beautiful story though.

Kunle—Ten years ago I was asked by my friend Adam Kimmel, who was a fashion designer, to be a model in—

Kunle—Right. We were already shooting looks for him for his look book, but he was having a fashion show in Florence. [for Pitti Uomo].[Jack] wasn’t a friend of mine yet. So, while there, we were staying in this villa, and we were basically isolated from everyone in Florence on this hill, and it gets very lonely in Florence on a hill, next to an olive orchard. The only attractive person that was on the whole trip that I could kick it to that took my fancy was Jack. So I kept on asking around, Who’s the fire crotch? Who’s that dude? And everyone was like, Oh that’s Jack. I was super into him and pawing all over him, but he was very shy and spoken for at the time, so nothing really happened.

Jack—And then last May, 2018, I had said I’d go to this opening uptown for Dan Colen, our mutual friend. It was at a really fancy gallery [Lévy Gorvy]. When it came around like five o’clock, I had been feeling very spring depression or something, I was like, I do not want to go, it’s the worst thing.

Kunle—I was feeling the same way. I had just finished a day of work, and I was hot and annoyed, and didn’t want to go to the Upper East Side. But, I had plans to go to this art show and dinner to support my friend Dan, which I wasn’t going to flake on, so…

Jack—Same with me, but I was really getting close to flaking because it just seemed like a nightmare of rich people and cool kids. It was too much to bear, but I did, and I walked in, and I was doing my best, and Kunle walked over to me, and he was like, Do you remember me? And I was like, Of course. He put his hand on my shoulder, and he was like, So, are you ready yet? In my interior dialogue, I was like, Oh no, I have no idea what it’s like, it’s very hard for me right now. I can’t even get… But somehow I just blurted out, Yes I am!

Kunle—And we spent the rest of the night blowing kisses at each other and making out, etc., at Dan’s dinner. It was very cute.

Jack—And then every day since. Every. Single. Day. [In Italy, 10 years ago] they were all wild kids, I was older—they were drinking and worse, and—

Kunle—Like on drugs. He was sober, and I was all on him, like, Hey, what’s up?

Jack—I couldn’t quite figure it out. I was like, Is he making fun of me? Why is this cool kid so into me somehow?  So I was just like, no, no, no, I wasn’t going to. I had a boyfriend! And he wasn’t there. And we’ve been together ever since.

Ann—How did you meet Angelo?

Kunle—Angelo writes graffiti, and I guess I didn’t really know him from writing graffiti, I’d seen him around, but he works for my friend Dan—

Jack—So Dan is really a big major nexus, along with Ryan McGinley, for our relationship.

Ann—Were they cheering you guys on?

Kunle—Yes, definitely. Ryan was like with the pom poms and the short skirt.

Jack—They said we were perfect for each other, and that there was probably nobody else for either of us any place. I met [Angelo] because my friend Paul Lee had a show here a couple years back. A beautiful show where he carpeted the space, and maybe there was a single light bulb on the floor or anything. And I’ve been coming to shows here. He’s a nice guy.

Ann—How did the idea for this show come up?

Kunle—My friend Blair Hansen suggested it last year, last winter. I was already doing some work for a solo show at Shoot the Lobster, and I guess she was also a very big supporter of our relationship. She liked us both and thought that should be expressed through art.

Jack—I knew her from a whole different crowd than his crowd.  It was easy to say yes to because we could do it fast. It’s a fun show and different for both of us. It came together very organically. We took two separate trips out of New York and Kunle started working on the drawing of me out in the desert of California, where I have a house in Twentynine Palms. Then the next month we went down to the west coast of Florida, where I have a house that I rent, for three weeks, with two of them pretty much by ourselves. We worked on the drawings more, we collected shells, drank Sprite and Diet Pepsi and just had fun. I’ve never done a photograph with tin cans sticking out of it before, but I just decided to use this experimental space to do something new. I don’t think Kunle’s ever framed a drawing with a shelf full of shells. We’re just trying to have some fun, which is what we’re always trying to do. 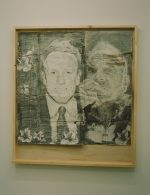 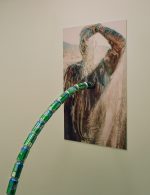 Jack—Kunle had that piece up in his studio, I told him to bring it down.

Kunle—We wanted to do a sculpture. This was a very good space for a sculpture, and that was the initial idea. The first idea was to do portraits of each other, but we also wanted to work on a sculpture if we could, so that also just came together. My two [drawings] came from photos. One was 25 years ago of Jack at the Whitney. He had a party, and the second one is a photo I took of him on one of our first nights out together at Bar Pitti. The light was just so perfect, and I took so many photos of him in that one shirt, and I thought I’d do a 25-year challenge sort of thing.

Ann—Did you create in the studio together, or on your own?

Jack—We brought our own elements to it, and then worked it out here. He loves Sprite, and he loves to pee.

Jack—Well, that and the fact that it’s next to this men’s room that’s constantly being used. [Laughing]

Kunle—Also, my drawing of Jack is soaked in urine. 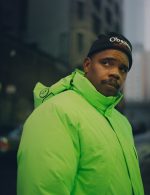 Ann—You’re both artists. Have you ever worked together before?

Kunle—I mean, we create things around each other. We’re always working on stuff and ideas. We talk about art together all the time. We go to art shows, museums.

Jack—And I guess we’ve both done collaborative work with enough other people, so it seems natural and easy.

Ann—Does it add another layer of depth since you’re a couple? And you know what they say about artist couples…

Jack—What do they say? [Laughing.] Sometimes it works out.

Ann—Will we see more of this in the future?

Jack—Who knows? If anybody wants to buy my tin cans coming out of the photograph, for sure you’ll see more of them.

Kunle—I mean I’m working all the time, so it’s hard to say no to an opportunity.

Ann—You’re both from very different generations. Do you ever feel competitive with one another?

Kunle—No more than two guys, but I feel like our generations are very—

Kunle—His group of friends and the time they came out, I think was very similar to mine, which was 20 years later. It’s not as difficult to understand each other as it would be for two different people of the same age.

Ann—What kinds of things have you learned from each other, taught each other?

Kunle—It’s hard to say. Every time Jack says something, I get a little piece of wisdom that I can use. It’s very helpful.

Jack—I think I do too. I don’t know anything about graffiti or skateboarding, and he’s taught me a lot about that.

Ann—What do you think of that whole world?

Jack—It seems fun. I did graffiti with him our first out. They went writing and I was the lookout.

Ann—You were? [Laughing.] Did you save them from getting caught?

Jack—No because I kept not paying attention.

Kunle—He kept on looking at us, which is hard to not do. It’s a rookie mistake. No big deal.

Ann—So what’s next for the both of you?

Kunle—I have a show at 3 World Trade Center for Beyond the Streets, it was a show in L.A. last summer that’s moving to New York. I have a couple more shows coming up, talking with a gallery in Paris for a solo show, and working on something in Italy.

Jack—I don’t know that I have a show scheduled, except in Provincetown this summer, a gallery I’ve shown at for 25 years. I’m going to have a show and I’m working on a new book project that will eventually have a publisher, but right now I’m just laying the book out.It’s kind of an overview of 10 years of photography, and I’m excited about that. 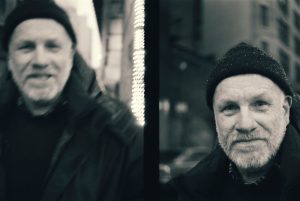 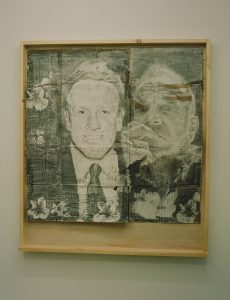 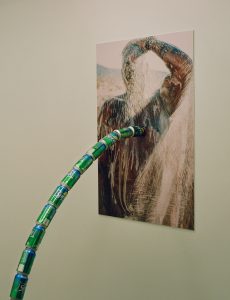 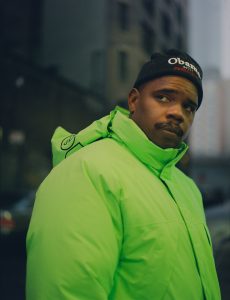 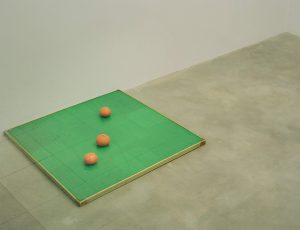