Armed with industrial floor paint the artist is working to repair Iraq's bullet-ridden cultural artifacts and reconnect us with our cultural past.

On display in the private residence of the UK’s Ambassador to Iraq, Dr. Salih Hussein Ali, are reconstructions of the destruction done to cultural artifacts at the hands of ISIS. Made from industrial floor paint by the artist Piers Secunda, each work sits alongside a second model, showing the artifact in its undamaged form—before it was embedded with bullet holes and damaged by power tools.

As the first artistic collaboration between the Kurdistan Regional Government’s representation in London and the Iraqi Embassy to the United Kingdom, the display is almost a metaphor for improving relations between the two sides. “ISIS wants to disconnect us human beings from the past,” Secunda explains. “And it’s not just people in the immediate vicinity—ethnically Kurdish or Iraqi people. Their intention is to disconnect people from an understanding of who they are.”

Cultural destruction has been key to ISIS’s propaganda machine. In 2015, and then again in 2016, the jihadist group blew up parts of the ancient city of Palmyra, with a battle cry to destroy idolatrous art forbidden under its interpretation of Islamic law. ISIS filmed and then distributed footage of the destruction online as part of a worldwide propaganda exercise. “The destruction of culture isn’t purely about people going into museums and smashing objects,” Secunda says. “It’s about destroying people’s abilities to practice the way of life they’ve known for thousands of years.”

The artworks are part of an ongoing series of work exploring culture erased at the hands of zealotry and extremism. Armed with dentist putty, Secunda has spent the better part of the past decade on the frontline of cultural destruction, aiming to “capture the texture of violent geopolitics,” and make an artistic record of what he calls the biggest news story for the past 20 years, if not the last century. The reliefs in Dr. Hussein’s home are the products of two separate trips, one in 2015 and another in 2018. “It’s absolutely essential that it’s recorded and documented in some way which is more than just journalistic and photographic,” he tells me. But traveling to the heart of conflict as violent and dangerous as that perpetrated by ISIS is practically impossible—unless you know the right people.

In 2015, through an academic in Middle Eastern studies, Secunda began building contacts with people connected to Kurdish Regional Government and the Peshmerga security forces in Iraqi Kurdistan. “My contact turned out to be extremely well connected,” he tells me. “When I first got off the plane in Iraq, a representative from the People’s Republic of Kurdistan met me, and took me to an ancient village on an old architectural mound called ‘The Tel,’ near the frontline with ISIS.”

Under the protection of the Peshmerga, Secunda visited Kurdish villages recently liberated after ISIS retreated from the city of Mosul. Despite the villages no longer being occupied, one of the world’s most violent terrorist organizations was a stone’s throw away. A mere 150 yards beyond the Peshmerga border were ISIS-held positions. “They were in very high embankments, fortifications made of clay, that you can’t climb up or you’ll slide back down,” Secunda recalls. 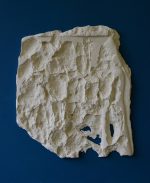 Arriving at 3:00am on day one, Secunda was led to the frontline by 9:30am. On day two, he visited the then-ISIS regional headquarters, a collection of buildings circling a courtyard. Before the insurgency, it had been a school for boys and girls.

Several years after returning from this first trip, Secunda was attending a UNESCO general meeting when he seized an opportunity to introduce himself to Iraq’s Minister of Culture, Fryad Rwandzi, by giving him postcard of his works. “He immediately knew what they were,” Secunda says, “and encouraged me to visit him in Baghdad.” This meeting became the foundation for the artist’s second trip—to Mosul, in March 2018—where he captured damage done to ancient religious artifacts.

The level of cultural destruction Secunda planned to document was more systematic than during his previous expedition. The year after he’d left, the Iraqi government and its Kurdish regional allies had successfully launched a 12-month military campaign to reclaim Mosul from ISIS, who had seized the city in 2014. Secunda was still in a dangerous part of the world: the war to defeat ISIS is ongoing, and a month after the city was declared free, volunteers were recovering as many as 30 bodies a day. But the artist was now able to roam around what was once the administrative heartland of ISIS’s attempt to build its caliphate. “During my first trip to Iraq, it wasn’t possible to go these places because the front line was so defined,” Secunda explains to me. “If you go beyond it you’re exposing yourself to ISS—I mean, that would just be suicidal.”

Secunda’s chief destination was the Museum of Mosul—the second-largest museum in the country—which Rwandzi wanted him to make a record of. In 2015, around eight months after ISIS had taken control of the area, the insurgents had released a propaganda video, later published online, of the group destroying “idolatrous” antiques and artifacts in the museum. targeting any artistic or historical record of gods worshipped instead of Allah. The attack was so savage the museum itself was left a shell of its former glory, with craters in the floor, stairwells left unusable, and holes in the wall.

With a team of Iraqi soldiers at his side, Secunda recorded some of the most poignant and devastating evidence of ISIS’s reign on open society. Assyrian and Akkadian civilizations had existed thousands of years before Christ, and their shrines and statues had, until that moment, literally stood the test of time. “It’s important that artists like Piers show people that what happened in Mosul can happen in other areas too,” explains Rwandzi. Secunda compares the Museum of Mosul expedition to visiting those now-destroyed villages in 2015. Looking into one of the houses, Secunda says, was like peering into a museum of Kurdish life: “There were kilims on the floor, a weaving machine in the corner, a loom, and a baby’s rocking chair.” The destruction is equally significant because all of it impacts people.

“I think the basis of my work is that I’m trying to make a record of the time I’m living in,” says Secunda. “I could take a photograph and put it on a TV screen, but it wouldn’t achieve what I want it to, which is the degree of authenticity that requires careful examination, consideration, and a degree of acceptance from the people who are close to it. Then I know I’ve set out what I intended to.

Since working on pieces about cultural destruction, Secunda has been attuned to the many forms of hidden heritage that’s gets erased around him on a daily basis. In London, Victorian houses get torn down all the time. Secunda says, sitting in his studio space in London, “every time that happens it means we lose a grain of sand from the pile, and that pile is history.”

Later this year, his ISIS bullet reliefs will be traveling to America, and there are plans for subsequent exhibitions. “I want to capture the essence of a story,” he tells me. Just as the molds in the ambassador’s house acted as a bridge between Iraqi and Kurdish relations, Secunda sees his work as an analogy for the ideological adoption of culture: “I want to cross the boundaries of language and create metaphors with my work. When I perforate my castings with ISIS bullet holes, I’m making art which serves as a metaphor for the overall destruction of Assyrian artifacts.” 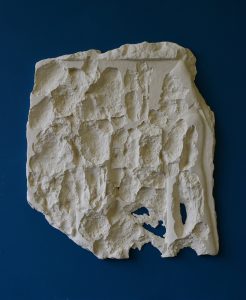 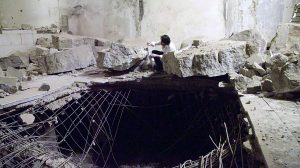