The artists discuss communal responsibility and imagine Black futures through their work and experience.

If you have walked around New York City there is a good chance you spotted the work of Gianni Lee and Elise Peterson. Gianni is an artist hailing from West Philadelphia, who began exploring visual art as a means of defining himself during a trying time. He has collaborated with a number of brands, including Nike and Fendi. Inspired by musical artists Tyler, the Creator, A$AP Rocky, Frank Ocean, and others, Gianni joins a cohort of “Black men in the industry being themselves 100%.” Elise Peterson is a tour de force from Washington, D.C. Dabbling in many varying artistic forms and expressions, Elise is multi-hyphenate; she’s an artist, illustrator, media host, storyteller, mother, the list goes on. Her work has been on display throughout the streets of New York, she has two children’s books under her belt, and mosaics to come.

Gianni presented Document with the idea of doing a portrait of Elise during their conversation. Document had the privilege of sitting with Gianni and Elise to hear them speak about their artistic journeys, creating Black work, and brainstorming the future through their crafts.

Elise Peterson—I want to talk about representation. You had said something like you didn’t know you could do what you were doing until you saw people who looked like you who were doing things that you were interested in. I know for me, until much, much more recently, I didn’t think that I was an artist. It felt like a fluke.

Elise—Yeah, I don’t know. The collage series, I wish I could almost erase it. I’m really proud that it happened. I just don’t think it’s honest and reflective of who I am now.

Elise—I just know that I’m capable of so much more and I feel those are a much better representation of who I am and where I’m from.

Gianni—I mean, I’ll like my work and then I’m like yo I can do better. I always look at my process, I just want to make sure I have time to make sure I do what I really wanna do.

Elise—Part of what allowed me to think (of myself as an artist)…was when I discovered Faith Ringgold. She illustrates children’s books, she makes paintings and fine art you can see in MoMa, but she also quilts. She’s multi-hyphenate. I think she embodies what it means to be free, and also she makes work that is obviously very Black. Sometimes I feel at this crossroads of being a Black artist and work being Black work and what is Black work, and what is our responsibility to make work for our community, make work that’s honest? I told you I’m doing some mosaic sculptures, and I was like, I just want to make mosaic hamburgers. You know? I just want to do silly shit!

Elise—Right, but then it’s also the fact of like, how am I using my platform? Can I be a Black artist and make mosaic hamburgers? [laughs] Is that okay?

Gianni—Okay so I wanted to ask you this for a long time… the art world is already kind of iffy and weird, and I asked myself why I’ve never really seen you collaborate with any men. So I just wanna know what you think about that or like what you think, if there are issues what you think those are?

Elise—Why is there a lack of collaboration between men and women?

Elise—No I’ve not collaborated with any men. I have been inspired by the narratives of men, specifically Black men. I don’t get approached by men to make work, to collaborate on art.

Gianni—Have you ever talked to men about possible collaborations?

Elise—No. It doesn’t feel safe. I think great work comes from vulnerability and in order to be vulnerable in a space with a man I have to have a certain level of respect and trust of that man. Men in the art world haven’t given me the space to feel like they deserve my respect.

Elise—So it’s having to be really vigilant about how I move and who I collaborate with, how I’m even potentially perceived because of men that I align myself with.

Gianni—Alright, I’m not gonna lie, sometimes I’m wondering, because I’m a man, and I’m around other men, I feel like part of my story is to be able to run with the wolves. I feel like, to a certain extent, I have to do that, I should be with my own.

Elise—So do you feel aligning yourself with a woman is not gonna elevate your career? Does it look like a lateral move?

Gianni—At one point it did. I had to be myself and tell my own story. But I look at it like, well why would I go out of my way to collaborate with a woman when none of my contemporaries are? What’s the problem here? And then I caught myself and I’m like, why am I even thinking like that? Once again, I make my own story I can do whatever the fuck I want. You know what I’m saying? I just, I don’t know, like I hope it changes…

Elise—So how are you gonna change it?

Gianni—I mean, I would have to just be a person who goes out on a limb and does that and not look at working with a woman as a lateral move because it’s not. Once again, we should be looking at women in so many different spaces as equals.

Elise—Do you consider your work Afrofuturism? Do you think it’s important to consider it? How important is the future in how you approach your art?

Gianni—I’ve been like that ever since I was a kid. I just always looked at myself as not really being from this generation but living in it and trying to teach people where we can go. I like the idea of future, I go out of my way to put futurism. Me being Black and using Black and Brown bodies I guess that would make it Afrofuturism to an extent.

“I don’t necessarily consider the future outside of the fact that I want my work to exist for generations to come.”—Elise Peterson

Elise—Maybe, or maybe the fact that you are Black so inherently your work is Black.

Gianni—I don’t mind being a Black artist but I don’t want people to assume that I’m just going to paint Black people because I’m Black. It was purposeful to make the figures blue, but to make them have features that would make them look Black. Sometimes I use figures that are pink…but that’s because if you mix the color pink up, you can get a lighter shade of olive which would match a white person. You mix it down with other colors, you’ll get a perfect brown all the way to a dark brown. So I feel like pink is that perfect area where you can go to any race, dark or light.

Elise—One thing for me, I never considered the future until I had a kid, right?

Gianni—That’s a quote right there.

Elise—It was hard for me to even imagine what my own future was going to look like, I couldn’t even plan what next month was going to look like until I had to. So, I don’t… necessarily consider the future outside of the fact that I want my work to exist for generations to come… That for generations to come there will be kids playing in a park on a structure that I created…Even the idea of, why couldn’t I consider my own future? Why? How deeply embedded is that into a lot of bigger societal factors of why I cannot consider the future…But in terms of imagery, I’ve always found it important to show Black people in my work. Just because that’s what I know, I think Black people are beautiful. I understand Blackness more than anything else. We’re at this really peculiar time too where people want you to identify.

Elise—Are you a woman? Are you Black? Are you American? How do you identify? And  you know I’ve always felt like, damn, if it hits the fan and we gotta go to war I’m Black.

Elise—They wanna know…I think I stand so deeply and rooted in blackness because I want us to be able to dream and also us to get to a space in which we can be in leisure… Inherently I think it’ll always be political because anytime you are Black and you do something I think it’s political. Whether you like it or not. Me having a Black child was a political statement…I’m not a painter, not that I couldn’t be a painter but when I think about the longevity of work, I feel like a book might last longer than a painting.

Gianni—Paintings get destroyed but they also only exist in this one space. Like you got to go to that space. So with a painting it’s like an elusive story. Like a Frank Ocean album. It’s like, where can we go see the motherfucker?

Elise—There’s a privilege in that too. When you talk about book versus painting. First of all, in order to have a painting you got to have a place to put it.

Gianni—That takes a long time. I mean same with books, you gotta get it published.

Gianni—That’s what’s funny to me, like I don’t look at my stuff as another world so that just gives me ammo and opportunities for me to find other places for my work to live. If I’m creating this world, I can just build a character and send it to some animator and create a cartoon…In terms of Afrofuturism, that’s why it connects to me so much because, I watch anime and the minute you put Black faces on anime I feel like that is Afrofuturism because anime itself is already inherently futurism. Japanese people just think differently, they think like, “Okay I’m here but what is this over here? What would this look like seventy years from now? I don’t know, but let me invent it and put it into animation.” Inherently I have already been building a story and building my world, so for me it makes sense to call it Afrofuturism. Once again, I don’t care about being called a Black artist, I just wanted to show people that being a Black artist comes in so many different shapes, sizes…

Elise—Do we have that responsibility?

Gianni—Do I have that responsibility?

Elise—As Black artists do we have the responsibility to portray Blackness?

Gianni—We don’t get the platforms but we have the responsibility yes. We don’t always get the platforms to portray Blackness and what it is right now in 2019. It looks totally different in 2019 than it did in 1919, right? We’ve come so far but we have so much more to build on, so much further to go.

Elise—If I made a mosaic hamburger, is it Black art?

Gianni—Yes! I feel like that’s the Blackest art. That is Black art, but it is also contemporary art, it is also fine art to me. It can be defined in different spaces. Either we have to get over definitions or we have to leave spaces to create more definitions. Once again, these people, the powers that be, they can snap you into existence or snap you out. That being said, give us more! Talk about us more! Don’t just keep talking about the same people over and over again. There’s so many other people out here that deserve a platform and have tangible things to say. 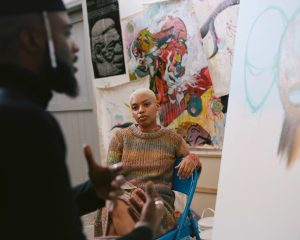 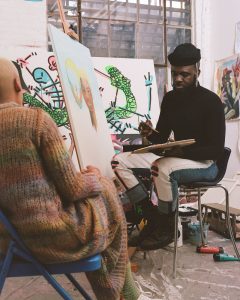 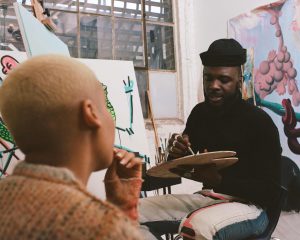