Studio visit: Eddie Martinez whites out his work inside his Bushwick space

Eddie Martinez met with Document ahead of his exhibition, White Outs, at The Bronx Museum.

New York-based artist Eddie Martinez’s work is usually full of color; It’s mostly abstract with some figuration sprinkled in, made with sharp gestural strokes of turquoise, or erratic scribbles of chartreuse, or inside random unidentifiable shapes. For his latest exhibition, White Outs, on view at The Bronx Museum of the Arts through February 17, Martinez stripped his work of color, by covering it in various shades of white. “It’s just how I relate to the world and how I process things and filter run things through these filters,” the artist said of his work. Document paid a visit to Martinez’s massive Bushwick studio to get an insider’s view on the artist, his process, and his current body of work.

Ann Binlot—How long have you been in this studio?

Eddie Martinez—December will be three years.

Ann—Why did you select this space?

Ann—What were you looking for in your search?

Eddie—You know, I was getting seduced by everyone getting these massive studios in LA, and I wanted that style here. I didn’t want to have a studio in the same buildings anymore with a ton of artists. I said my goal was to find my thing. I actually hired a broker and this was a raw warehouse, so I built all this up so I got a long lease. 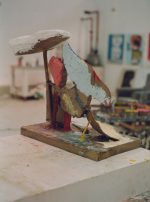 Ann—Tell me about the premise of your exhibition at the Bronx Museum.

Eddie—Unfortunately I don’t have any here, they’re all gone, but I can see some sculptures—like there’s one right there. It’s all this body of work called White Outs where I basically make a painting white. There’s no rule of how far the painting goes. But then I’ll wait it out. Like I go over everything and push it back, but it’s also still present, the color.

Ann—Like that one over there?

Eddie—That’s one that didn’t make it. I was working on that one for a show, but I didn’t feel like forcing it. I also just didn’t need to because I have enough paintings. [There will be] eight paintings and eight bronzes.

Ann—Do you have any examples of the bronze work here?

Ann—What was it like working in bronze? Have you ever worked in bronze?

Eddie—Yeah, I’ve been doing it for a couple of years. I love the medium. I have the small ones here too, but none of the paintings. So these operate under the same idea, you know, you can see the color and everything and then I just white it all out.

Ann—How did you find the objects that you assembled for your sculptures?

Eddie—A lot of this shit, I just find on the beach, like, a lot of it is buoys cut up, or lobster traps.

Eddie—Out in Long Island. That’s, like, a half a tennis ball.

Ann—Does it have a particular meaning? Why did you choose to go to Long Island?

Eddie—Because we live out there in the summers on the North Fork. I just started picking stuff up off the beach and then I didn’t really have any idea of how to make a sculpture, I just knew that I wanted to. So I just started sticking things together.

“I didn’t really have any idea of how to make a sculpture, I just knew that I wanted to. So I just started sticking things together.”

Ann—Where do you have this fabricated?

Eddie—There’s a bunch of places around in Brooklyn and I tried them all. None of them were peculiarly trustworthy.

Ann—What were the flaws that you found in them?

Eddie—Like [delivering a piece] six to eight months past the deadline, the edition not matching. Like pieces missing. Or extra pieces. So then I just bit the bullet and started going upstate to the real place, which is called Polich Tallix.

Ann—Who else uses that place?

Eddie—Everyone. That’s where all the big shit is made in New York.

Ann—What are the biggest challenges of working in a medium like bronze?

Eddie—Just the time and the cost. Because you’re expensive and it takes a really long time. I mean, the amazing thing about Polich Tallix is that they meet deadlines, so you know when you’re going to get it.

Ann—Why were the other ones having such a difficult time?

Eddie—I think it’s because they’re run by artists. They’re just not reliable. I mean, missing a deadline by six months is pretty extreme.

Ann—What are some of the images and symbols that you put into them? What do they mean?

Eddie—That’s something I’m working on specifically right now. But, like, there’s a bird in this whited-out one here on the left. I’ve just been kind of drawing the same shit forever. Little bits of exploded still lives, you know, floating fruit—like, if you look at that one over there there’s a lemon or something to the left. And then, yeah, I shied away from any kind of figurative or representational thing for a few years, and then I’m going back in full force.

Ann—What made you decide to go back to it?

Eddie—Just time and maybe some sort of maturity.

Ann—I’m used to your work being so colorful. What is it like for you to white out these—

Eddie—It’s awesome. I enjoy it. It’s liberating. I don’t feel like I’m sacrificing anything. I just feel like I’m gaining a new dimension by doing that. You know, it’s not actually erasing anything, [it’s] sort of facilitating their growth in a different way. 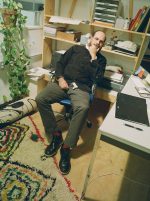 Ann—What do you think are the biggest challenges of being an artist in 2018?

Eddie—I think it probably sucks for a lot of people because the way New York’s going, it’s so outrageously expensive and hard to maintain a practice here. But, you know, it’s hard to say, like—I don’t know what the challenge for every artist is.

Ann—How many museum shows have you been in? What is the difference between being in a gallery show and a museum show?

Eddie—This will be my third one. It’s a huge difference. I mean, first of all, you don’t have the commercial pressure of it. In a gallery, you’re hoping that things sell. In an institutional show that’s not there. The work is still for sale, but it’s not it’s not a focus. It’s not what it’s about. So it takes that pressure off of it. I’ve really been enjoying working in museums so far. It’s a totally different thing. They’re much more interested in the ideas than the finished product, which is cool, and it frees you up to do things that you might not otherwise do. You can take more risks. I feel like it’s more personal in a way, to show in museums if you grew up wanting to be an artist.

Ann—How did this particular show come about?

Eddie—There’s a collector friend of mine named Carole Server and she’s on the board there. Then I met with Sergio Bessa, the curator, and we got on and he came over here a couple of years ago and I had been working on these White Out paintings at the same time as these other things. And he really responded to the work I had. They were all in here at the time, and they were all big, like eight by 10 feet. He was just kind of jazzed by it, and so we opened up the dialogue and came back and we just kept talking about it and then we decided that’s what the show should be. And also I had two very colorful show exhibitions in New York already this year in January. So, you know, I don’t need to do that again. So let’s do the White Outs.

Ann—What are you up to next after this?

Eddie—These skull paintings, these stacked [ones]—I’m showing these in Japan in December at Perrotin Gallery. 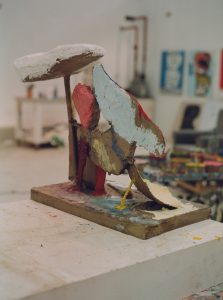 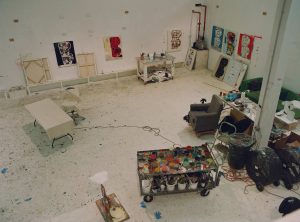 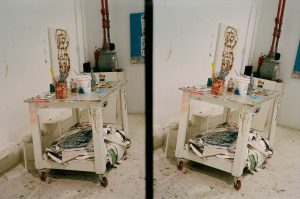 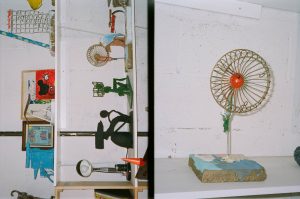 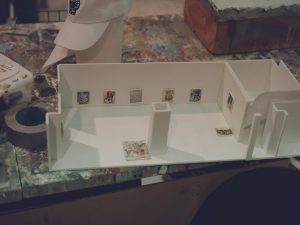 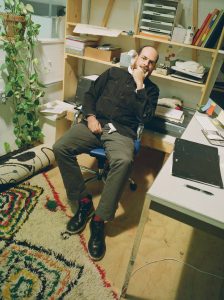 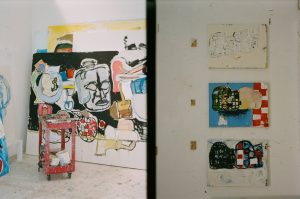