Kim Jones' debut collection for the storied house at Paris Fashion Week was a bold announcement of the brand's latest iteration.

The Kim Jones era of Dior has arrived. Jones didn’t let the fact that the house of Dior started as a women’s fashion label stop him from referencing several aspects of the house in its early years, as well as parts of Christian Dior’s life. Think of it as the two Diors highlighted in Dior’s own autobiography: the fashion house and the actual man. Jones opted to explore that duality— the two Diors—in his first collection, which exchanged the Homme for Men, signaling a new direction of the house.

A giant, larger-than-life 33-foot sculpture composed of roses of BFF, a pink character that looks like a muppet with Xs for eyes created by the artist Kaws towered over the runway at the Garde Républicaine barracks during Kim Jones’s debut outing with Dior Men this past week. In BFF’s hand sat a replica sculpture of the Bobby perfume bottle modeled after Dior’s dog Bobby. 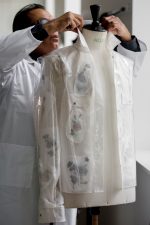 “Elegance must be the right combination of distinction, naturalness, care and simplicity,” said Dior once. “Outside this, believe me, there is no elegance. Only pretension.”

Jones elegantly translated the DNA of the storied couture house into a men’s collection through soft, loose silhouettes. He took the Toile de Jouy originally used by Victor Grandpierre in 1947 to decorate the original Dior boutique at 30 Avenue Montaigne. Jones had it done in jacquard and embroidery, putting it on tulle and soft leather. The designer took the glaze of the bone China on Mr. Dior’s porcelain, and mimicked it on feather embroideries by Lemarié that were overlaid with Vinyl. The soft pink seen in suits, trousers and a trench recalls the color of Dior’s childhood home in Granville. The bold yellow on a suit references Jean Cocteau saying “This agile genius of our times whose magical names contains “dieu” (god) and or (gold). The line even has a new modernist logo taken from the one the house namesake used in his family businesses in the 1920s. Jones brought the iconic Dior saddlebag into current times by making the first rendition for men, as a crossbody, backpack, and belt bag. 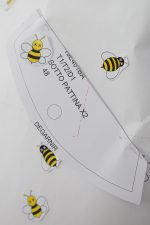 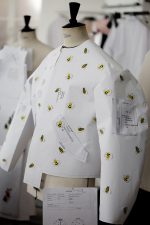 Jones took the myriad Dior references and combined them with a series of collaborations that could only define a menswear brand of today. He tapped Yoon of Ambush to create the jewelry, Matthew Williams of 1017 Alyx 95M to make a CD belt buckle, Stephen Jones to create millinery based on the original “Christian Dior Monsieur” pieces he discovered in the archive, and Kaws bee motif—an emblem of this new era of Dior Men. 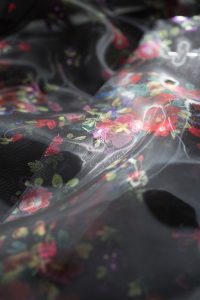 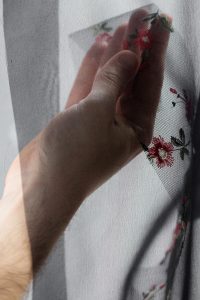 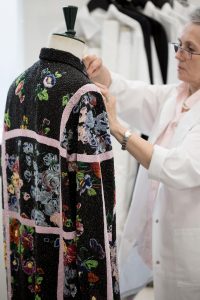 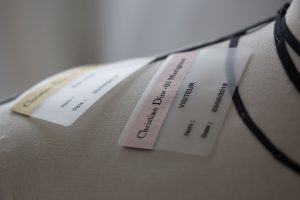 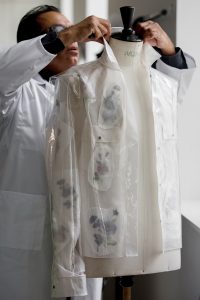 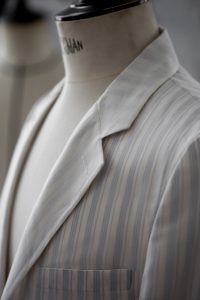 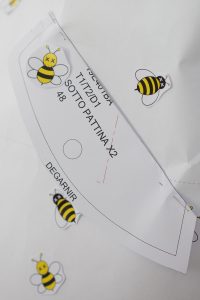 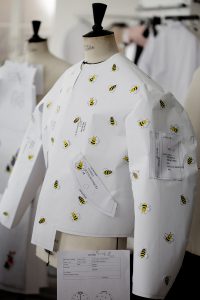