Across global mythology, religion, and philosophy, the tree of life appears as a paradigm connecting creation in all its forms. For the Christian Dior Haute Couture Fall Winter 2022/2023 collection, it acted as a branch between the designs of creative director Maria Grazia Chiuri and Kyiv-based Ukrainian artist Olesia Trofymenko, in a collection designed to invoke the imaginations of universal folkloric cultures in a single, open dialogue.

In Ukrainian folklore, the tree of life is believed to connect all realms—the underworld, heaven, and earth—drawing continuity between ancestral, present, and future generations. For artist and set decorator Trofymenko, who was born in 1982 in the town of Vilcha in the Polisky region, the tree of life is something of a leitmotif in her work, representing “womankind, the continuation of life and a bright future”, the show notes described.

Chiuri first saw the work of Trofymenko in Spring at the MAXXI National Museum of 21st Century Art in Rome in an exhibition series dedicated to contemporary Ukrainian artists. For the show, held inside a tent erected in the gardens of the Musée Rodin, she mounted floor-to-ceiling tapestries on the walls. From afar, each appeared as paintings, but on approach, they sat in relief with rich, heavy embroidery and beading.

In a project that saw art and artisan exalted to the same level, this 3D embroidery and heavy beading was echoed in the runway collection, depicting the roots and branches of the tree of life, alongside patchworks of braids and hand-loomed fabrics. The collection, inspired by traditional Eastern European garments and folklore was romantic and traditional with polite ankle-length hems and palettes that rarely strayed from rich neutrals, punctuated by chartreuse, carmine red and dusty pinks and adorned with surface work realised by hand by women at Chanakya School of Craft in Mumbai. They will continue to work with Dior for the season ahead.

The collection’s superlative embellishments and painstakingly crafted artisanal finishes from cultures the world over, passed down and repeated throughout generations were exalted. Each was a reminder to respect the gestures of the past—despite a challenging present—in Chiuri’s optimistic message of renewal and the inevitable cycle of life. Trofymenko joins Document to discuss the making of and inspirations for Dior’s latest line. 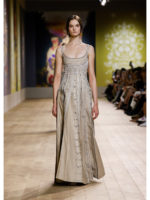 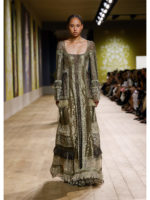 Divya Bala: What first drew you to the tree of life as a motif throughout your body of work?

Olesia Trofymenko: The tree of life motif emerged as a form of inner defiance against the invasion after I had, quite literally, started planting seeds in the ground for an uncertain future. And so it was quite natural that this traditional motif was one of the first things that came to mind when we started to work on the Dior show scenography.

Divya: What was the experience of collaborating with Maria?

Olesia: Maria Grazia Chiuri saw my work in an exhibition of Ukrainian artists at the MAXXI in Rome. It was all the more surprising because my picture there only measured 10x15cm. It’s called ‘Red Mirror’’ and it was made using my own technique combining embroidery and painting which clearly appealed to her. So she reached out to the project curator, Solomia Savchuk, who connected us and that’s how the collaboration began. It was a process carried out long-distance and it wasn’t until the show that I finally met Maria Grazia in person. And of course I was really excited by the result when I saw it! I thought Maria Grazia’s collection was absolutely fantastic, and so I was really happy to have been a part of the show!

Divya: What mediums did you use to realise the works in the show space?

Olesia: We initially planned to use a mix of painting and embroidery, as my work is typically painting-based. Unfortunately, there wasn’t enough time for painting, so we decided to use photo prints with hand embroidery.

Divya: How long did the pieces take to create?

Olesia: The ensemble took about a month in total. I had a great interaction with the Chanakya School of Craft and ateliers in Mumbai which produced all the absolutely fantastic embroidery in only three weeks, and with the involvement of around 500 artisans.

Divya: Could you discuss the correlation of your pieces and the Dior collection that was presented?

Olesia: The overall focus was to evoke a hymn to life and living, which synced with the collection’s celebration of the universality of artisanship.

Divya: What do you hope people take away from your works?

Olesia: For the show installation, I used photos of Ukrainian families taken between 1903 and 1907, traditional wedding wreaths, 17th and 18th century Cossack embroidery motifs, and tree of life motifs, too, of course, all along with my own photos taken in different parts of Ukraine. It’s about the continuity of life—tradition and culture in spite of everything. The images aren’t sunny and bright, and I sought to communicate a current of communal emotion through them. 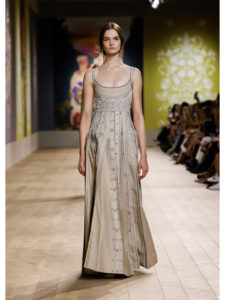 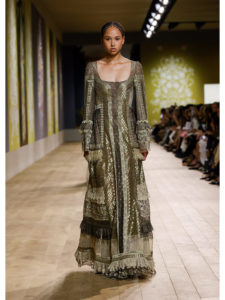