What does the rise of workwear in fashion say about our own ideas about labor in the age of automation and the Amazon warehouse?

There is one garment quintessential to our idea of work: overalls. Originating as a denim garment with bifurcated trousers, shoulder straps, and a bib front, overalls were made and marketed for work on farms, factory lines, and coastal docks in the mid-19th century. From around the 1890s until the Second World War, countless advertisements depicted men, women, and children wearing some form of overalls. The garment was marketed on the basis of function, durability, and desire for protection, conjuring associations with frontier expansion powered by railroads and steam—the Gold Rush and the American dream. In photographs of rural agricultural workers taken by the Farm Security Administration, a sturdy nobility appears in the laborer’s uniform. The look, as Richard Martin and Harold Koda wrote in their book Jocks and Nerds: Men’s Style in the Twentieth Century, “advanced the imagery of the worker beyond toil to grace.” Decades later, overalls appeared on protestors and nascent subcultural groups—hip-hop and skateboarding—fusing workwear with elements of subversion, rebellion, and unequivocal style.

Workwear companies like Carhartt and Dickies have, of late, embraced their role at the nexus of utility and trendiness, putting the “style” in lifestyle by selling their selfsame laborers’ workwear to urbanites, suburbanites, and rural communities alike. Fashion has echoed the message. Transformed on the runway, the hardwearing ethos of workwear still communicates a desire for universality and dignified work, authentic values and noble intentions. Yet just as often, these impulses are subverted on the proverbial street and runway alike. At Calvin Klein, Martin Margiela, Prada, and others during the Fall / Winter 2018 season, workwear was a prevailing mood. Industrial materials like nylon and reflective silver appeared in the collections, alluding to technology and synthetics born of mass manufacturing. Take, for instance, John Galliano’s recent collection for Martin Margiela, in which traditional work garments were transformed to dissonance and displaced origins—oversized vests and parkas referenced networked technology and mobile phone screens. “SMS” (Security Margiela Sneakers) and slick iridescent surfaces were styled with protective hoods and oversized gloves.

At Calvin Klein 205W39NYC, Raf Simons and his team brought dreamy visions of America to the forefront during the past three seasons at the venerated American label. In Simons’s Fall / Winter 2018 collection, models wore protective layers in the form of oversized jackets and gloves, as if ready for shifts in a chemical plant or clean room. Thigh-high white waders insulated the models not from hazardous material, but from floods of popcorn that filled the venue. Movie references mixed with reflective stripes and orange workwear lent a theme of protection to the show. Descriptions of the collection referred to astronauts and HAZMAT suits, yet I also thought of Intel’s clean room “bunny suits.” Popularized in TV commercials, they were worn in environments where people aren’t the ones that need protecting, but instead, the nanoscale tolerances of silicon wafers.

These collections point to how cultural imaginaries of work have changed. No longer images of dockworkers or the factory line, internet-age industrial “labor” has shifted to fulfillment centers and delivery networks, work that delivers us streaming images, video, and repeating industrial forms now barely interrupted by the silhouette of bodies. With industrial imagery once dominated by assembly lines, textile weaving apparatuses, and hundreds of individuals hewed to sewing machines, today’s images show how automation fulfills much of the duty; whizzing robots from Quicktron or Amazon Robotics join people in the frame. The collections of Fall / Winter 2018 operate as demonstrations of the formidable forces of capital, processes of repetition and scale vast enough to be incomprehensible without abstract data and the software to operate on it. Labor forms a long chain connected by multinational corporations, their unprecedented magnitude and capacity for “fulfillment” showing that, indeed, in some spheres capital growth is expanding and accelerating.

Fear and rejoicing over automation have existed since automata were first conceived. The Mechanical Turk stunned audiences by “outwitting” chess opponents in the late eighteenth century, and Google Deepmind’s AlphaGo made headlines when it outmaneuvered top, world-ranking players of Go in 2015, 2016, and 2017. Reportage from the days when computers were room-sized—storing data on punched cards and magnetic tape rather than floating gate transistors—reveals anxieties about work amidst technological innovation. In the summer of 1960, when faced with the creative destruction of computing and the imminent fear that retail associates might be replaced by automation, the Retail Clerks International Association conducted a 22-page study, passing it on to a Joint Congressional Economic Committee. On the assumption that much of retail work would soon be automated, the organization proposed a solution to the problem: shorter hours.

In matters of economy and style, efficiency and utility have been long held virtues. The image of labor and class in America remains a potent and abiding image of authenticity. Although sometimes packaged and promoted as a distinct brand of Americana, romantic views of work are not limited, or even exclusively traceable, to America. Ideas about dignified labor remain resonant in many places influenced by the global market economy—that is to say, with rare exception, most everywhere. Over the past few centuries, interconnected trade between nations has guided us along a familiar trajectory: businesses in relatively advanced economies, with high incomes and the average standards of living that come with it, may choose at will to shift labor costs to places further down the scale. And periodically, customers awaken to a fact that designers well-know: the stuff of fashion—textiles, zippers, buttons, and trims—are the creation of a production line somewhere.

“The collections of Fall / Winter 2018 operate as demonstrations of the formidable forces of capital, processes of repetition and scale vast enough to be incomprehensible without abstract data and the software to operate on it.”

When almost any type of good can be had with free same day shipping, locker pick-up, or—testing soon—drone delivery, the housing, transport, and movement of a product become alive as the thing itself. Observed in commercial real estate booms for warehouse space, companies like Amazon and Alibaba have become known for sprawling operations and vast server facilities (in undisclosed locations) to power cloud services. The shipping container, credited by some as one of the most significant innovations to occur in global trade during the twentieth century, made an appearance at Chanel’s Métiers d’Art show in Hamburg, a city known as a port of call and maritime trade hub. Models walked the runway with handbags in the shape of shipping containers swinging from their wrists. The bags’ lines mimicked the corrugated walls and proportions of intermodal containers, finished off with a logo double-C. At Prada, the men’s show was held for the first time at the company’s warehouse, transformed by OMA into an “oneiric and surreal archive” entitled “Prada Warehouse.” Industrial textures filled the interior with floors, walls, and crates covered in corrugated metal, lumber, and plastic encasements. This style of crating, storage, and transport remains familiar to art collectors and warehouse workers alike.

Yet transport inside this shipping container is of a different nature: inside the Chanel freight container, a person’s daily essentials travel not along trade routes via ships and cranes, but always near the body—the contents accessible, within arm’s reach. Perhaps, a sense of open-air freedom is analogous to desires within our own lives: the feeling that as a luxury, ease of transportation and freedom of movement is always within reach.

This feeling has only intensified since the 1980s—a period of accelerating global trade—when the smooth, uniform look of Prada’s woven nylon first appealed to notions of function and ease. Industrial and interchangeable, the nylon fit the unified spaces of multinational brands—the same in every city. Nylon returned in Prada’s recent ready-to-wear collections. For men’s Fall/Winter 2018, four architects and designers were invited to create an object using the brand’s signature nylon. In homage to Prada’s original backpack, Rem Koolhaas created a large padded bag with four uniform zippers and reversed the bag’s orientation: this backpack’s worn on the front.

“The displacement of labor on the runway that draws us closer, that invites us to consider our own ideas of work more closely.”

Networks of trade and shipping have settled ever deeper into the psyche. Corporate logos have returned from the early 2000s whence they came (and there again from the ‘90s, from the ‘80s—you get the idea). Writing about the surge of slogan t-shirts in 1989, Martin and Koda declared, “Wit on the chest was rampant.” Nowhere is this more evident than in the debut of the memetic Vetements DHL t-shirt, modeled by Gosha Rubchinskiy for the opening look of Spring 2016. Speaking to a reporter on the t-shirt’s origins, creative director Demna Gvasalia said, “For me, it was such a recurring topic in my life. Every day someone was saying, ‘The package didn’t arrive, we have to stop working with DHL, we will be bankrupt by DHL.’ DHL seemed to be more a part of my life than anything else so I thought, why isn’t it in the show?” Vetements partnered with the company known as Dalsey, Hillblom, and Lynn for the t-shirt, making this appearance of the DHL logo an officially sanctioned one. As for the t-shirt, it sold out in a wild fervor of wait listing and reselling, reappeared in subsequent seasons in limited editions and themed pop-ups, and together a new-wave designer and a global logistics company went home satisfied after a successful biz dev deal (in which no parties went bankrupt).

More recently, another logistics company joined the cause célèbre. Enter the Worldnet hoodie; a branding exercise that, after garnering fashion attention on the Instagram-influencer circuit, returned for round two of logo play. To coincide with the Fall / Winter 2018 season, Worldnet installed the company’s globe logo onto a graphic t-shirt rendered entirely in sequins. It was only available to select parties for fashion week.

The editor Lewis Lapham once said, “history doesn’t repeat itself, but it rhymes.” Like denim, the shared clothing of work has become “a world currency,” as Martin and Koda once said. On a functional basis alone, few would suggest that warehouse fulfillment workers be kitted out in the latest looks from Prada or Calvin Klein 205W39NYC (although DHL did ask for 20 of the coveted meme tees for its staff when it agreed to let its logo fly free on the runway—the request was granted). Warehouse fulfillment garb has yet to receive the designer treatment à la airline uniforms, yet our assumptions about fashion and function may be subverted at any time. A friend of mine, looking for something to wear to work, was recently mulling over the purchase of a pair of spruce overalls for the season. She works not in the field or the factory, but within the walls of a large art storage facility, archiving past collections and ephemera for fashion brands. The overalls, to her, were the perfect expression of form and function, style and utility. They do the job—with brio. As Prada said of her Spring 2011 collection—inspired by uniforms and hospital scrubs—“Beauty and dignity are deeply connected.”

Connections between fashion and work are endlessly changing—in practice and in the mind—and as my friend’s overall musings show, they’re not so far afield after all. Utility is a funny thing. It sits alongside “value” as a wildly uncommon denominator—especially in matters of style. Perhaps the best interpretation of luxury jumpsuits and reflective-striped runway workwear resides in their fictiveness; the “factory look” represents play and imagination that sets these runway-ready designs apart from their Uline catalog counterparts—for now (up next: Uline Spring / Summer 2019). Ironic or expected, the displacement of labor on the runway draws us closer, inviting us to consider our own ideas of work more thoroughly. It allows us to stake an individual claim in a world of unfathomable abstractions—transnational flows of mass-produced goods and warehouses spanning one million square feet—with a celebratory élan. By reimagining “work,” fashion offers an escape from it—or at least a glorious coping mechanism. 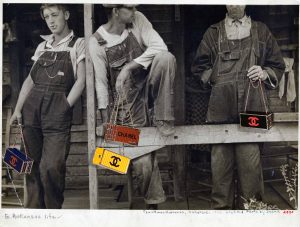